In the early 40s, film maker Otto Preminger was getting set to make what would become a classic of film noir, the Gene Tierney-Dana Andrews starrer, Laura. Darryl F Zanuck, who headed 20th Century Fox at the time, was eager to cast Laird Cregar in the role of Waldo Lydecker, but Preminger wanted Clifton Webb for the role. Zanuck insisted that Webb was too effeminate to play Lydecker; Preminger stuck to his guns. Eventually, Webb played Lydecker—and played him so well that the role got him an Oscar nomination for Best Supporting Actor, and it got him a contract with 20th Century Fox that made him work only with the company for the rest of his career. 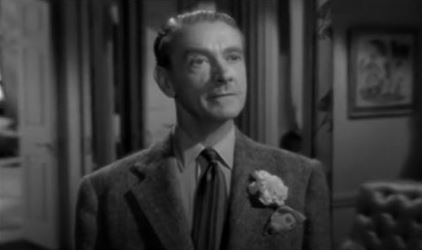 It is with Lydecker that Laura begins. He’s a very well-known radio columnist who receives a visit one morning from a police detective, Mark McPherson (Dana Andrews). McPherson is investigating the murder of a young woman named Laura Hunt (Gene Tierney), who was found dead in her apartment, killed the night of the previous Friday. Her body was riddled with buckshot from a shotgun. Laura Hunt was a good friend of Lydecker’s: he was, in a way, the man who helped her get where she was, a woman to reckon with in the advertising world. 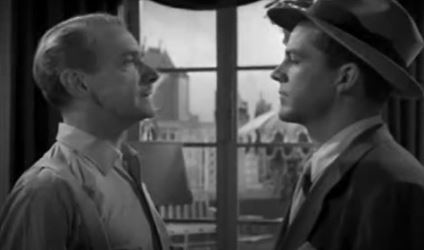 Lydecker emerges as a brusque, acerbic man with a sharp tongue and no compunctions about putting people in their place (or their place as Lydecker perceives it). Lydecker, however, seems very interested in McPherson’s investigation of the case, and asks the detective if he, Lydecker, can accompany McPherson on his rounds. McPherson doesn’t mind, so Lydecker goes with him to various places, including Laura’s apartment. An apartment Lydecker is very comfortable in.

When McPherson wants to know how Lydecker got to know Laura Hunt, Lydecker recalls the meeting, several years ago, when Laura, working for the ad agency where she is now the boss, interrupted Lydecker’s lunch at a restaurant. 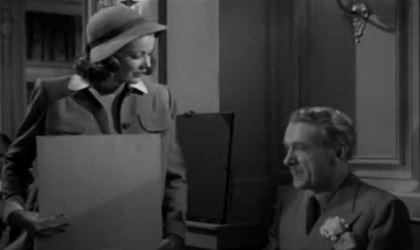 Laura, knowing (of course) Lydecker’s standing as a columnist, wanted him to endorse a pen brand. She had taken the initiative of creating an artwork, which she was carrying with her. Despite all her cajoling and pleas, Lydecker was his curmudgeonly self and told her curtly that to him his lunch was more important than her. Laura went away… 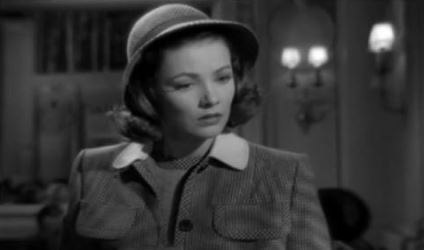 … but Lydecker had second thoughts. He turned up at the ad agency, apologized to Laura, and signed the endorsement of the pen. And he asked Laura out to dinner. 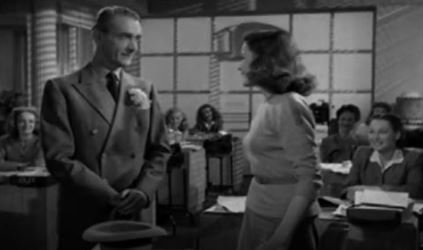 Since then, Lydecker has helped Laura in many ways. He’s introduced her to important clients, he’s watched her admiringly as she’s made her way up the ladder in her career. They eat out frequently, he’s given her a number of gifts. While McPherson looks about Laura’s apartment, Lydecker points out objets d’art that were gifts from him: a vase, a screen, a unique twin set of standing clocks.

On the wall is a striking portrait of Laura’s, which McPherson is drawn to. Lydecker tells him that one of Laura’s admirers, the artist Jacoby, had painted it.

Jacoby was quite fascinated by Laura, and she seemed to have liked him enough to turn down a dinner date with Lydecker. Lydecker recalls that he was surprised when Laura ditched him for dinner, so he went to her home to check if all was well. Looking up from the street, he saw, silhouetted against the window, the shadow of Laura with a man.

Lydecker had waited in the shadows downstairs and seen who the man was when he finally came down from Laura’s flat. Jacoby.

That was the end of Jacoby, Lydecker tells McPherson with relish. Because Lydecker, through an acidic, well-placed bit of journalism, destroyed the man’s career and him. That was the end, therefore, of Jacoby’s relationship with Laura. 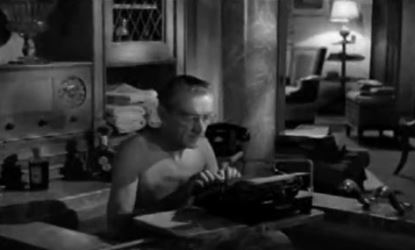 Lydecker accompanies McPherson to the home of Laura’s aunt, Ann Treadwell (Judith Anderson). Ann Treadwell is shaken by Laura’s murder but not shattered. Interestingly enough, currently at her home is Shelby Carpenter (Vincent Price), who it turns out was Laura’s fiancé: they were to get married this week. Carpenter comes across as a little gauche, not one of your suave men about town. It’s also apparent that Lydecker dislikes Carpenter intensely. He’s constantly belittling the other man, constantly heckling him.

It was at Ann’s place, at a party, that Carpenter and Laura had first met. He had soon charmed her to the extent that Laura got him a job at her ad agency. And, since then, they’ve gotten engaged too. 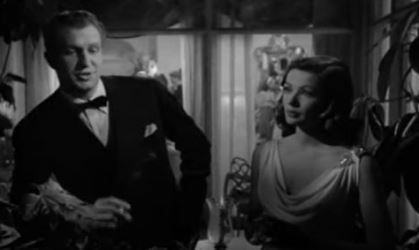 But Lydecker has something to say about that to McPherson. He admits that on the day before she was murdered, he had met Laura. And he had confronted Laura with proof of Carpenter’s infidelity. Lydecker had had someone investigate Carpenter’s past and had come up with some sordid truths: he’d been in trouble with the police several times, he’s been in debt.

When Laura told Lydecker off and said that was all in Carpenter’s past, Lydecker drew out his trump card: an expensive cigarette case which Laura had gifted Carpenter recently. The case was pawned by a young woman named Diane Redfern, who works at Laura’s ad agency. Laura tried to find excuses for Carpenter’s behaviour: perhaps Diane Redfern was in need of money, and Shelby was just trying to help her out. 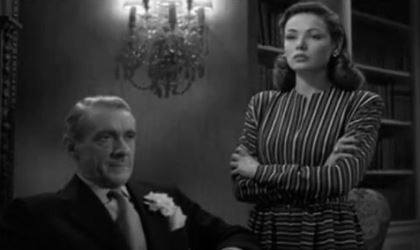 Oh, but Diane Redfern was the one who pawned the case, pointed out Lydecker. It’s her name on the pawn shop’s receipt.

A distressed Laura had cancelled a date with Carpenter and had decided to go meet Diane Redfern instead. Later that day, egged on by Lydecker, she went to Ann Treadwell’s home—as usual, Carpenter (who keeps borrowing money from Ann, and sponging off her) is there at Ann’s—and had confronted Shelby Carpenter, flinging the cigarette case (which Lydecker gave her, having redeemed it from the pawn shop) in Carpenter’s face. 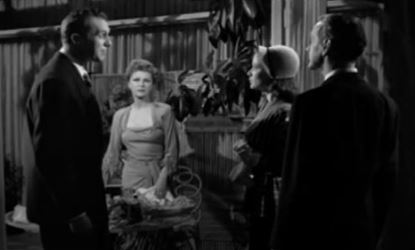 Laura had told Carpenter that she was going up to her place in the country to think over things. Basically, whether or not she still wanted to marry Carpenter or not.

But Laura Hunt seems to have either not gone to her country home, or she came back sooner than expected, because she was killed on Friday night.

In all this investigation, much of it happening in Laura’s apartment (where McPherson has also met Laura’s very devoted and fiercely protective housekeeper, Bessie), McPherson has become obsessed with the dead woman. She looks down at him from Jacoby’s painting of her on the wall. Memories of her crowd in on him all around: the things in her dresser drawers, her clothes in her wardrobe, her perfume. 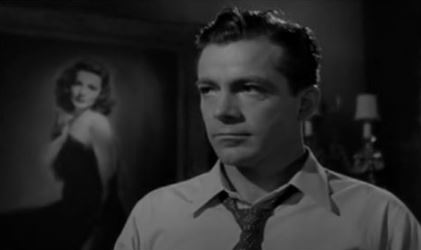 McPherson, drinking rather copiously for a cop on duty, is trying to sort out the tangle. Who killed Laura Hunt? The fiancé who has been using her for her money but is having an affair with another woman? Diane Redfern, Carpenter’s lover? Or someone else?

But McPherson, and pretty much everybody else, is in for a surprise. Because something utterly unexpected is about to happen.

I won’t say what, because that’s a vital part of Laura. Go watch the film for yourself. It’s a good one.

The story. The suspense is good, and the twist in the tale makes it even better. There’s nothing that’s unnecessary, and everything (as it should in a good detective story) fits together, eventually.

The cast, which has some real stalwarts. And a special bit of applause for Clifton Webb, who is superb as Lydecker. So nasty, so clever.

Something relatively minor, but still. McPherson’s obsession with Laura. It comes about very suddenly: it’s not as if we see a gradual build-up, with McPherson growing increasingly interested in her. There is her portrait there, but it’s not as if one can see (as happened in Hitchcock’s Vertigo), the man being attracted to a woman who’s off-limits. Here, the realization that McPherson is in love with Laura comes like a bolt out of the blue. I can see why it’s important to the plot to have that happen, but how it happens is not very believable.

Despite that, though, a very watchable film. Otto Preminger got a Best Director Oscar nomination for it. Though he didn’t win, it’s proof enough of what a good film Laura is.