When I see Dharmendra, Mala Sinha, Madan Puri, Mehmood and Shashikala as part of the cast, I’m inclined to sit back with a happy smile and look forward to the movie. I expect to be entertained, not subjected to a string of disconnected scenes that make me want to weep with frustration. But yes, after Baharein Phir Bhi Aayengi (also Dharmendra and Mala Sinha—I’m losing my faith in these two), Neela Akash was another disappointment.

The film begins with the graduation of Neela (Mala Sinha), the eldest of the three offspring of Karamchand (Raj Mehra) and his wife (Sulochana Latkar). Karamchand is the type of father nobody should be subjected to: he’s bossy, selfish, prone to gambling (and worse, losing) at the races, and a drunk. Fortunately, a good-at-heart goon called Abdul Chacha (Madan Puri) hauls him home every night.

All of this is most distressing for Neela, which probably accounts for her perpetually bad mood. She’s particularly nasty to Akash (Dharmendra) who bumps into her accidentally a couple of times—and gets chewed out by Neela even though he apologises.

Akash and his two-timing friend Madan (Mehmood) are paying guests at the home of Rita (Shashikala) and her mother (Manorama)—though, as the mother describes it, Akash is the `paying’ guest; Madan’s simply a guest—he hasn’t paid up for the past three months. Rita is nuts about Akash, and is so pesky that he’s looking to shift elsewhere.

Akash’s search for another home brings him to Neela’s house, where her mother thinks he’s come in response to the matrimonial ad she’d placed in the papers for Neela. She likes Akash immediately, but Neela (as can be expected) flies into a rage and shoves him, and Madan, out. This woman needs therapy, I think. Nobody can be so ill-tempered.
In the meantime, Karamchand has embezzled funds and then lost all at the races. His boss (Brahm Bhardwaj) discovers, and is ready to phone the police when Neela arrives. 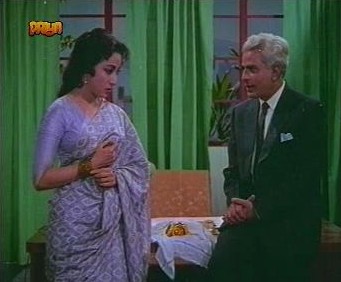 She pleads with the boss, and hands over—as compensation—all her jewellery. She also promises she’ll start working (this was something Karamchand had been very tetchy about: “The women of our family don’t work”), and will pay back whatever is due. The boss fires Karamchand, but agrees not to report him to the police. Neela goes looking for a job, and becomes an airhostess. And guess who’s the pilot on the flight? Akash! And the co-pilot? Madan.

[Aside: Correct me if I’m wrong, but doesn’t it take years to become a pilot—and that too the captain of a commercial aircraft? Neela Akash suggests this was something that happened over a couple of months at the most. I know Bollywood heroes are superhuman, but this is taking things a bit far].

Neela now does a volte face, and falls in love with Akash. Fortunately for her, he reciprocates, and we’re treated to a few nice songs. One of my favourites here (and that mainly because of the setting) is Aapko pyaar chhupaane ki buri aadat hai. It’s been filmed at Delhi’s Lodhi Gardens, which (me being the history buff I am) are perfect for dancing around the trees.

After some pointless digressions (Madan juggling girlfriends; Rita and mother acting silly; etc), the story moves on. Karamchand sees Neela and Akash together, and warns Neela off: she can’t burden Akash with his—Karamchand’s—shady past. Neela does try to push Akash away, but he tells her he doesn’t care. The sins of the parents, as far as Akash is concerned, shouldn’t be visited upon the children. Thank heavens for someone who’s rational.

Akash brings his mother (Mumtaz Begum) to meet Neela’s parents. His mother’s happy, but says Neela won’t work after the wedding. Karamchand is outwardly amenable, but he’s actually worried: a sit-at-home Neela will mean that his household’s only source of income will be gone. This wedding, he decides, is better off not happening.
Meanwhile, war’s been declared against China, and Akash tells Neela he may get called up on emergency duty. I didn’t know commercial pilots got called up too, but anyway. Rita sees them together, and is livid. She goes off to her mother, and the old harridan hatches a plot to split up Neela and Akash. As an accomplice, they pick Karamchand. 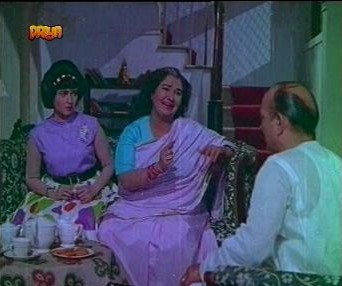 By now, Akash has bought his own house. Rita’s mother phones him, babbling about Rita having fainted. When he arrives, ready to call the doctor, Rita immediately starts feeling better, and her mother coaxes Akash into having a cup of tea. He’s in a hurry—he has a date with Neela—but finally acquiesces. Little does he realise the tea’s been liberally laced with sleeping pills.

Neela, waiting for Akash, is approached by a strange woman, who tells her that Akash is a lecher trailing a string of broken hearts, with Neela being his latest prey. And as proof, she takes Neela along to Rita’s house: 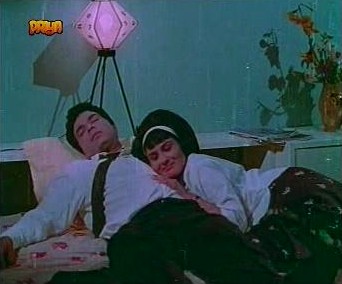 When Akash finally comes to, he goes to Neela’s place, only to have her turn him out. And when he gets home, distraught and unhappy, it’s to learn that he’s been called up for emergency duty.
It goes without saying that everything will turn out well (which Hindi movie of this ilk didn’t?), but how? Will Akash come back a hero and dazzle everybody into admitting the truth? Will Neela find herself heading out after him? Will the Chinese do everyone a favour and drop a bomb on Karamchand?

What I liked about this film:
Dharmendra and Mala Sinha. These two did a lot of films together—Baharein Phir Bhi Aayengi, Anpadh, Aankhen, Pooja ke Phool, Jab Yaad Kisiki Aati Hai, etc—and I do think they look good together. And Dharmendra is awesome in a uniform!
The music. Madan Mohan, and very good.

What I didn’t like:
The treatment of the story. It’s really not a bad premise—a father who’s completely self-centred—but it’s been handled awfully. There are too many distractions (the comic subplot, for example, with Mehmood and his girlfriends, sticks out like a sore thumb: it has almost no connection to the main story), and much of the initial interaction between Neela and Akash is unconvincing. The many quarrels don’t make sense at all.
The entire bit about airlines, the war, etc, doesn’t ring true. This’ll have us believe that pilots get trained and ready to pilot a flight within a few months; that commercial pilots got pulled into the war to ferry wounded soldiers to hospitals and deliver top secret documents to the front; and that—okay, no more. But Neela Akash has some of the most hard to believe war scenes I’ve ever seen.
Too much wasted talent. Most notably, Madan Puri, whose handful of scenes as Abdul Chacha do not justify his appearance in the film. This man merits much more screen time. The same goes for Shashikala: she’s wasted here.