When I was a kid in the late 80’s, All India Radio used to air a series of Western music programmes, most of which consisted of songs from the 50’s and 60’s. There was one programme—I’ve forgotten what it was called—which focused on music from the movies: Oklahoma!, My Fair Lady, Fiddler on the Roof, The Sound of Music—and High Society. I was singing along to Who wants to be a millionaire long before I realised that yes, I did want to be one.

The fly in the ointment is CK Dexter-Haven (Bing Crosby), a composer whom Tracy had eloped with two years earlier and whom she’s since divorced. Dexter has invited Louis Armstrong and his band for a jazz festival at his home—which abuts the Lords’ mansion.
Dexter still loves Tracy, but the only encouragement he’s getting is from Tracy’s kid sister Caroline (Lydia Reed), who wants him and Tracy to get back together.

Meanwhile, Tracy’s mother Margaret (Margalo Gillmore) is trying to avoid the fact that her husband Seth (Sidney Blackmer) is romancing a chorus girl. A scandal sheet called Spy, however, gets the scoop on Seth Lord, and uses it to blackmail Margaret into allowing a Spy reporter and a photographer to cover Tracy’s wedding. Enter photographer Elizabeth `Liz’ Imbrie (the peppy Celeste Holm) and reporter Macaulay `Mike’ Connor (Frank Sinatra).
Tracy figures Liz and Mike will be expecting the flighty and frivolous idle rich. She and Caroline put on an act: they chatter in French, pretend to be proficient at ballet and piano, and generally give the impression they’re empty-headed sprites without a care in the world. 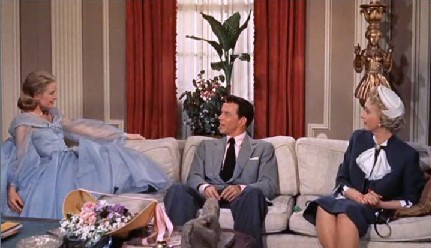 Tensions start surfacing soon enough. Dexter arrives, as does George. A photo session with Tracy, her ex-husband and her bridegroom ends with all three passing snide remarks at each other, while Margaret tactfully tries to field questions about Seth Lord’s whereabouts. 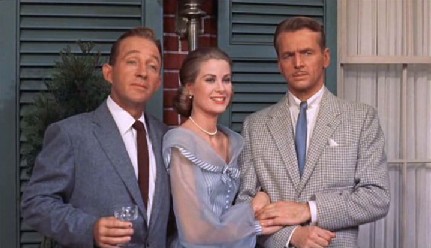 Liz and Mike’s wanderings through the impressive Lord mansion—and the display of wedding presents lined up—doesn’t help the Lord cause much. This is all a hollow sham, decides Mike, as he and Liz traipse through the hall, singing the delightful Who wants to be a millionaire. Liz doesn’t, at any rate—all she wants is Mike, though he doesn’t seem to realise it.

Dexter comes by to give Tracy a wedding present—a model of the True Love, the boat on which they spent their honeymoon (singing True love, another of my favourites). This is an obvious ploy to remind Tracy of the past, and it works, much to George’s irritation.

In the meantime, Seth Lord has turned up, and Tracy (embarrassed to admit he’s her father) tries to pass him off as her uncle Willie. Seth is initially surprised, but when he catches Tracy on her own, there’s a confrontation: he accuses her of being heartless, a `bronze goddess’; she flings his philandering in his face. Margaret tries to break up the fight, but everybody’s very bitter.

Furious with her father, Tracy goes off, just in time to give Mike a tour of the district. She’s annoyed, largely because she knows Seth’s right. She is on a never-ending quest for perfection, both in herself and in others. Which is why poor Dexter, not the most perfect of human beings, didn’t quite measure up.
But let the others be; Mike at least is quite convinced Tracy’s the thing. Sensational, in fact.

That evening, there’s a `democratic bachelor’s party’, as Tracy describes it: not just women. It is, actually, quite a do: what frills, what frocks! What furs, what rocks!, as Dexter and Mike agree in the dee-lightful Well, did you evah. What a swell party this is!

And while the men are appreciating this swelegant party, the bride-to-be is getting very drunk. She ends up dancing with Mike, then consents to being dropped home by him. Once home, Tracy slips off her engagement ring (and what a ring: Grace Kelly’s original engagement ring from Prince Rainier, whom she married the same year), and lets Mike sing for her: Mind if I make love to you?

Dilemma, dilemma. So whom does Tracy marry? George? Dexter? Mike? Predictable, I guess, but it’s a toss-up between two of the contenders until the very last scene.

What I liked about this film:
The music. Cole Porter is superb: I love each of the songs, beginning from Louis Armstrong and his band singing High society in the bus that’s bringing them to Dexter’s home. This is a good, old-fashioned musical of the sort that Bollywood made its own: liberally peppered with songs, and with a lot of scenes just there to provide an excuse for a song. And yes, Sinatra and Crosby (though never favourite actors of mine) are hard to beat for great voices. As, of course, is the inimitable Armstrong. Awesome!
Grace Kelly. Such a lovely lady: I could see films just for her. Sigh.

What I didn’t like:
While I enjoyed High Society immensely, I came away feeling it was somehow half-baked. You know: a story that wasn’t quite complete, scenes that didn’t really fit, and characters that weren’t completely fleshed out. Caroline, for instance, was everywhere in the first few scenes, then more or less vanished; one never knew why Margaret was so forgiving of Seth, or why Seth was with the chorus girl; and Tracy’s romance with George just didn’t seem plausible. Oddly enough, Tracy’s best chemistry seems to be with the man she doesn’t marry.
A showcase for a lot of excellent music and a very beautiful leading lady (in her last performance, by the way), but that’s it.