Someone once said that Nasir Hussain came to Bombay with one story in his briefcase, and created a series of blockbusters out of it. This is one of them, and a vastly entertaining film: total paisa vasool. You get your money’s worth.

The story’s similar to that of Dil Deke Dekho, Tumsa Nahin Dekha, and Jab Pyaar Kisise Hota Hai: a couple separates, and one of them raises their only child, a son. He grows up, meets his `other’ parent (who’s wealthy), and they don’t quite hit it off—but he does fall for that parent’s adopted daughter. To complicate matters, there’s a villain who pretends to be the long-lost son, whom the parent has been yearning for all these years. 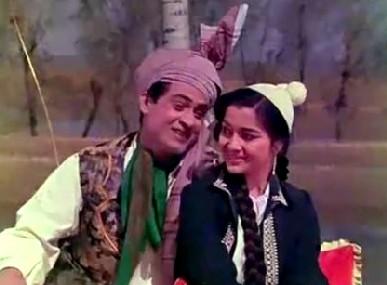 And though I’ve more or less given away the story, I’ll repeat myself for Phir Wohi Dil Laya Hoon.
Colonel Mahindernath (I don’t know who the actor is—Wasti?) suspects his wife Jamuna (Veena) of infidelity, and throws her out. Jamuna hires a crook, Mr Kapoor (Krishan Dhawan) to kidnap her infant son, Mohan, from the colonel’s home. She takes Mohan to Kashmir, while the colonel ends up raising Mohana `Mona’, the orphaned daughter of a friend who died in an accident while chasing Mohan’s abductor. 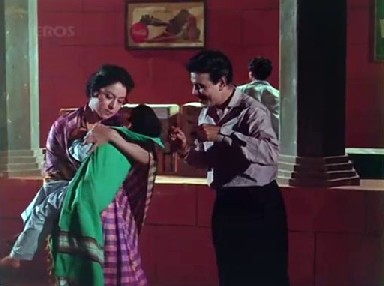 Years pass (where would Bollywood be without the flipping calendar?), and Mona (Asha Parekh) is now an accomplished dancer, for whom the colonel (a very wealthy man) has fixed up what he fondly believes is a good match: the London-returned Deefoo (Rajendranath). Mona is not enamoured of Deefoo. I’m not surprised. 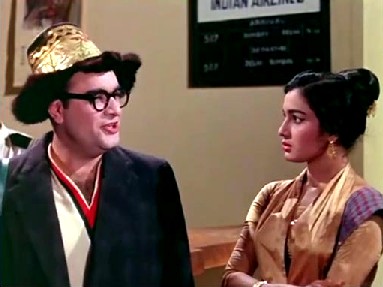 While Mona’s cribbing about her clownish fiancé to her friends, in faraway Kashmir, Mohan (Joy Mukherji) has found Jamuna with a tabloid photo of the colonel, Mona, and Deefoo. Mohan can’t understand his mother’s love for the colonel—though, to give the colonel credit, he’s discovered Jamuna was innocent, and has been putting ads in the papers asking her to come back.
Jamuna denies that she feels anything for the colonel. Ha-ha! Mohan’s not convinced. 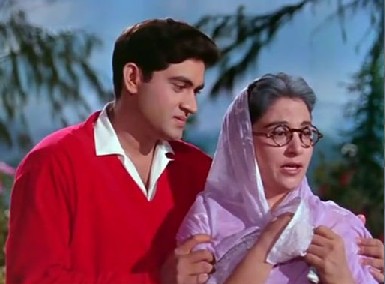 Mohan’s pal Kamaala (Ram Avtar) is a cab driver, whom (coincidence, coincidence!) the colonel commissions to come to Delhi, pick up Mona and her friends, and drive them to Kashmir for a youth festival. Kamaala invites Mohan to come along to Delhi and back, and Mohan agrees. In Delhi, he recognises the colonel. The colonel thinks Mohan’s insufferably insolent, and forbids Kamaala from taking Mohan along in the cab to Kashmir. 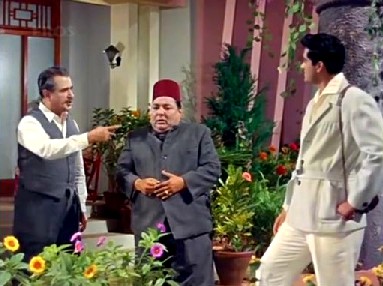 Mohan also sees Mona, and takes it upon himself to break up her non-existent romance with Deefoo. Outside a café where she and Deefoo are supposed to meet, Mohan intercepts Deefoo. He convinces Deefoo that Mona is nuts and has been taken to Agra for treatment. Mohan then goes into the café and introduces himself to Mona as Deefoo’s friend from London, in town for a day. He also tells Mona that Deefoo’s nuts (I agree!) and has been taken to Agra. He mourns the fact that he’s now all alone in Delhi, with nobody to take him sightseeing. Mona offers. 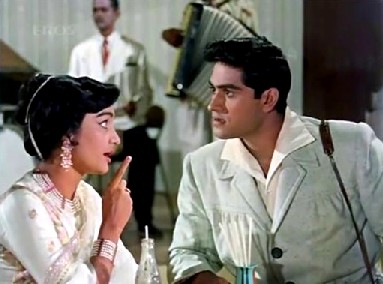 After some tripping around Delhi, they head for Agra (Mona wants to see the loony Deefoo). There’s a brief interlude when Mona’s friends—including one played by the vivacious Tabassum—catch up with them and do a song and dance (Aji qibla, mohtarma, kabhi shola). Mona and Deefoo run into each other at the Agra hospital, and are both convinced the other’s bonkers.
The day over, Mohan and Mona return to Delhi. He tells her he has to return to London the next morning, and has no idea when—and if—he’ll come back. Mona assures him she’ll wait, even forever. 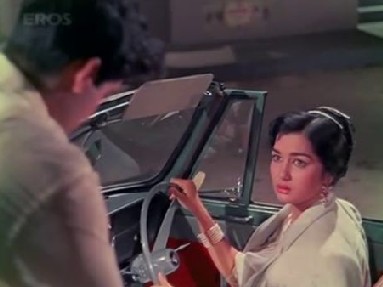 Meanwhile, in the hotel room next to Mohan’s, a plot is being hatched. Mohan’s long-ago abductor, Kapoor, is now in cahoots with a murderer called Ramesh (Pran), on whom Kapoor has the goods: a photo of Ramesh, red-handed. Kapoor gives Ramesh the lowdown on the colonel, Jamuna, Mona, et al. 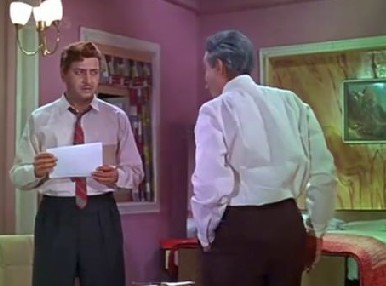 The next morning, Kamaala picks up Mona, her pals, and Deefoo, and they start off for Kashmir, with Mohan (unknown to everybody but Kamaala) sitting on top of the cab. They stop along the way to eat and play juvenile pranks on Deefoo. Some irritating slapstick follows, along with one lovely song: Aankhon se jo utri hai dil mein. When they reach Kashmir, Mohan emerges and tries to sweeten up Mona, who’s miffed at having had her emotions played with. 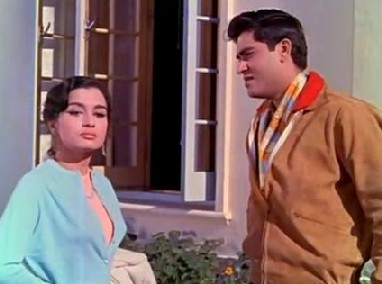 Mohan’s cajoling takes some doing (and more songs: I love Banda parvar thhaam lo jigar), but he succeeds, just as the colonel arrives unexpectedly. The colonel has news for Mona: he’s been approached by a doctor called Subodh Mukherji.
[Aside: I love the many references to Bollywood in this film. Mohan’s hotel in Delhi is the Parekh Hotel, and at one point, Deefoo says about his parents: “What a fat mother! What a funny father! I wish I was anath (an orphan)! I wish I was Premnath!”]
Anyway, back to where we were. Subodh Mukherji has told the colonel that Jamuna is dead, and that Mohan—whom she’d named Ramesh—is now deranged as a result of his grief for his mother. Mona and the colonel go to meet Ramesh, who acts violent and half-crazed. Mona succeeds in soothing him. 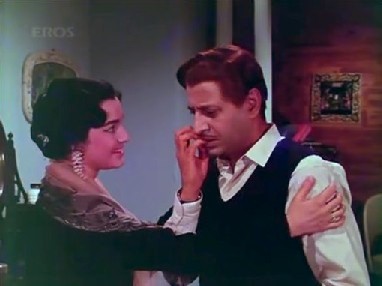 Subodh Mukherji now tells the colonel it had been Jamuna’s dying wish that Ramesh marry Mona. Ramesh emphasises the point by trying to commit suicide when he sees Mona with Mohan.
The colonel is so blinded by his love for his `son’, he’s willing to ride roughshod over Mona’s feelings. And the fact that that ne’er-do-well Mohan will be left out in the cold doesn’t hurt either.

What I liked about this film:
The music, by O P Nayyar: fabulous. Mohammad Rafi gets to do some wonderful playback for Joy Mukherji, including Lakhon hain nigaah mein, zindagi ki raah mein and Aanchal mein sajaa lena kaliyaan.
Asha Parekh. She’s beautiful, she’s a good actress, and just so very watchable. And she hits it off well with Joy Mukherji: there are some playful scenes between them which are great fun. 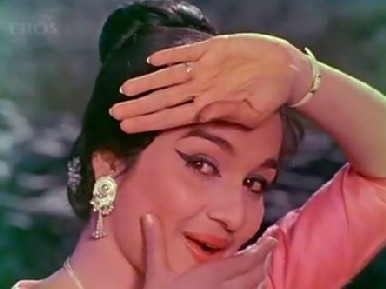 Tabassum. I saw a lot of her on TV when I was a kid, and I remember her as the little girl in Bachpan ke din bhula na dena (Deedar, 1951), but this is one of the few roles I’ve seen her in as an adult, and she’s delightful. 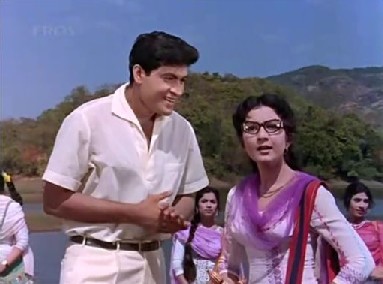 What I didn’t like:
The sets. Oh God, the sets. Much of the film is shot out in the open in Kashmir, but where they try to replicate exteriors—Delhi’s streets, a historical building, the garden outside Mohan’s Kashmir home, etc—everything’s just so obviously painted on or embellished with plastic flowers. This, for instance, is obviously not a real historical monument at sunset: 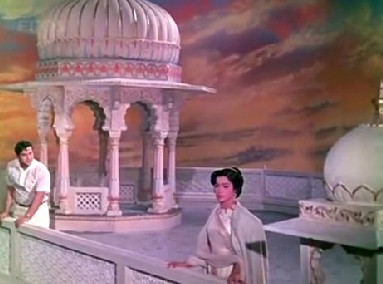 The comedy element. Rajendranath is a favourite of mine, right up there with Mehmood and Johnny Walker; but he’s really not very funny here. The comedy’s too slapstick for my taste. And what is he doing in a dress? 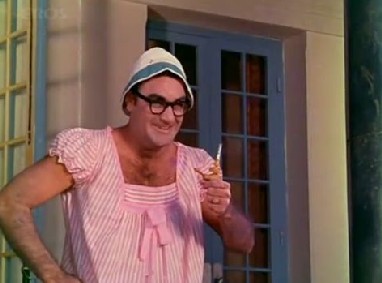