I am an unashamed romantic—but I have some stipulations. The romance mustn’t be the type that pops up out of the blue, just by two people looking at each other. It mustn’t consist of just staring, pop-eyed and with a silly grin, at each other. Most important, it must end happily. The ride into the sunset, or the fadeout on a heart-and-soul smooch, is of paramount importance.
That said, here’s one utterly lovely romance I saw a few weeks back. And then again yesterday, just because it was so wonderful.

In the autumn of 1918, in the Melbridge County Asylum, the military wing is home to an officer (Ronald Colman) who was wounded in the trenches at Arras in 1917. He’s lost his memory and has no idea who he is. He doesn’t even remember his name, so they call him Smith. He’s a diffident, unhappy man, mentally groping in the dark for his own identity, drawing deeper into himself with every passing day.

One day, an elderly couple whose son went missing at Arras come to see if Smith’s their son, but turn away, disappointed. Smith is equally, if not more, disappointed: he’d hoped for someone to call his own, even if he can’t recognise them.
A peasouper of a fog is coming on, but Smith puts on his overcoat and goes for a walk in the asylum’s grounds. As he’s walking, there’s a hullabaloo (World War I has just been declared over, and everybody’s spilling out onto the streets, rejoicing). In all the excitement, the asylum guards go out to join the celebrating crowds, and leave the wicket gate open. Smith steps out, and walks into town.

In Melbridge, Smith enters a tobacconist’s. He’s so unsure of himself that when the woman behind the counter asks what he wants, he stammers and gets frightened. The woman realises he’s escaped from the asylum, and she slips away inside.

Smith is standing in the shop, undecided, when another visitor—a pretty girl called Paula Ridgeway (Greer Garson)—tells him he’d better get out, because the tobacconist has certainly gone to phone the asylum. In fact, seeing the state he’s in, Paula takes Smith under her wing. She takes him off to the Melbridge Arms, where the bartender, the `Biffer’ (Reginald Owen) is her friend. She chatters nineteen to the dozen with Smith (she calls him `Smithy’), putting him at his ease, and tells him she’s a music hall dancer. 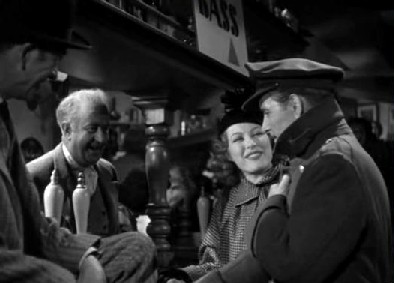 Since she can’t figure out what to do with Smithy, (he’s obviously unable to manage on his own), Paula takes him to her dressing room. When it’s time for her to go on stage, she puts a chair out for him on the landing so he can watch her dance. Paula’s a big hit on the stage:

Smithy, who’s exhausted, passes out during the revelries that succeed the show (everybody’s still celebrating the end of the war). When he comes to, he finds himself being looked after by Paula and the Biffer. Paula also tells him that her boss, Sam (Rhys Williams) has offered to give Smithy a job with the touring company. She doesn’t tell Smithy she’s the one who’s wheedled Sam into it. 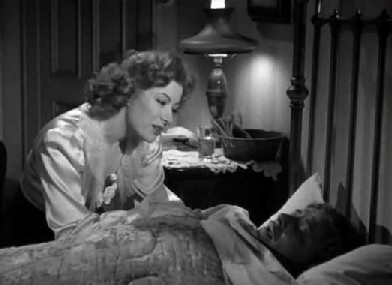 But a chance remark by a policeman at the bar alerts Sam: he realises Smithy has escaped from the asylum. He takes back the offer of a job, and Paula tells Smithy that he’d better leave before the people from the asylum come for him. In the very next breath, she sees Smithy isn’t up to going anywhere or doing anything on his own. So Paula, kind and concerned as always, gathers up her things, tells Smith to wait for her, and goes to pay Biffer. When she comes back, it’s to find that Smithy’s knocked out Sam, who tried to stop him. 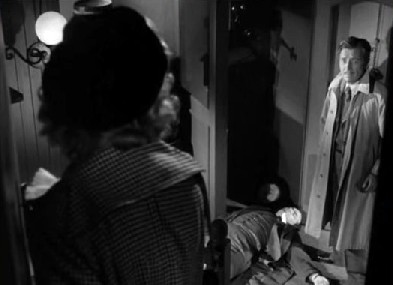 Paula doesn’t wait to see what condition Sam’s in. She drags Smithy off to the railway station and gets both of them onto a train to Devon. They fetch up at a picturesque little town called Clevedon, from where Paula phones the Biffer to check on Sam. Sam’s all right, and doesn’t intend to press charges against Smithy. Ecstatic, Paula and Smithy decide to stay on in Clevedon for the time being, where they hire rooms at the local hotel.

Paula begins to learn typing, and Smithy, who has a flair for writing, manages to get some articles published in a Liverpool newspaper. He’s happy, much more self-assured than he was, and very much in love with Paula. He finally proposes, she accepts joyfully, and they’re married. All’s bliss and poetry and roses.

And there’s more happiness to come. In November 1920, their baby John is born, and Smithy dotes on his new son. He’s ecstatic, and is even more elated when a telegram arrives from the Liverpool newspaper, asking him to come to their offices for an interview. If Smithy can get a job, it’ll be perfect. Paula helps him pack and kisses him goodbye, little realising what’s in store. 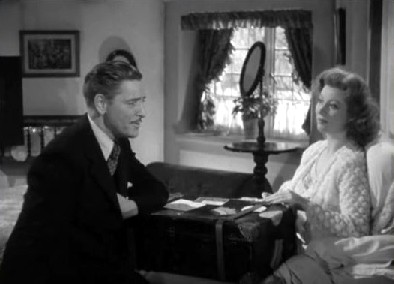 In Liverpool, Smithy’s walking towards the office from his hotel when a car hits him. He’s not badly hurt—merely concussed—but a kindly neighbourhood chemist pulls Smithy into his shop and attends to him. When Smithy comes to, a policeman’s there, getting ready to ask questions. And Smithy’s answers are a revelation: His name’s Charles Rainier, of Random Hall, Surrey; he’s a Captain with the Wessex Regiment; and he has no idea what he’s doing in Liverpool—as far as he knows, he should be in the trenches at Arras, fighting the Germans. 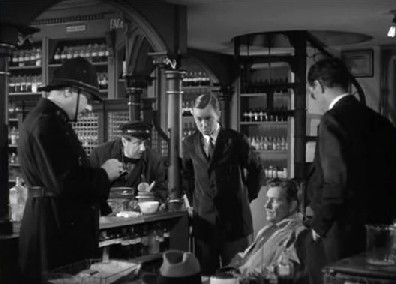 Charles Rainier is very disturbed to find that it’s 1920; three years of his life have disappeared into oblivion, and he has no idea what he’s been doing all this while. But he decides that the best course of action would be to return to his family. He therefore goes off to Random Hall, only to learn that his father’s died four days back, and the entire family—Charles Rainier’s siblings and their spouses—have gathered at the hall after the funeral. Nearly all are surprised but happy that Charles is back.

Kitty (Susan Peters), the fifteen-year old stepdaughter of one of Charles’s sisters, is infatuated from the word go. She hangs on Charles’s every word, and when it’s time to go, bulldozes him into agreeing to keep in touch—and to have her visit Random Hall during the holidays.

Charles finds himself at a loose end at Random Hall, not least because he keeps mulling over those three lost years of his life. The only clue he has is a door key, but no idea which door it opens.
Years pass. Kitty has grown up and graduated, and is now a sophisticated young woman, still utterly fascinated by Charles. Charles, who has in the meantime made a name for himself as a businessman (the newspapers have dubbed him `The Industrial Prince of England’) eventually proposes to Kitty. She’s delirious with happiness and accepts straight off. 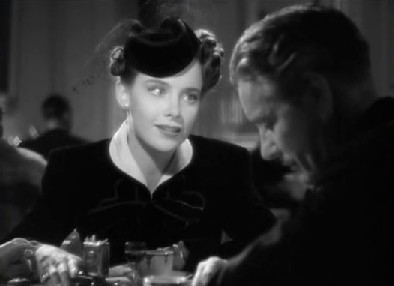 With Kitty wanting an early wedding (and probably a long honeymoon afterwards), Charles realises he’s going to be gone a long while. He knows, however, that he has no cause for concern. His extremely efficient secretary, Miss Hanson, will take everything in hand. So Charles calls in Miss Hanson, to announce his engagement and start making plans.

As you can see, this is the start of something interesting. Watch it: it’s worth every minute.

What I liked about this film:
Just about everything. But most especially, Greer Garson. She is such a wonderfully expressive actress, and so beautiful too. She is Paula—warm, irrepressibly cheery and optimistic, loving, and kind. And she is Miss Hanson, the efficient, poised, calm secretary who handles Charles Rainier’s business affairs with such thoroughness. And she is much more (which I won’t tell!). Random Harvest merits a watch for Garson’s performance, if not for anything else: she’s marvellous.

What I didn’t like:
Ronald Colman. Yes, he’s a fine actor; his eyes speak: you can see the frustration, the anguish and the uncertainty of Smithy in them, and the nagging doubt of Charles Rainier, who isn’t sure what he did in the three missing years of his life. But—and this is a very emphatic but—he’s just not my idea of a romantic hero. He looks tired and fortyish all through the film, even when Kitty’s going on telling him how handsome he is.
Now, if I’d been given the casting of this film, I’d probably have had Laurence Olivier in this. Perhaps even Robert Donat. But not Ronald Colman.

Still, a fabulous film. And ah, such a touching end. It got seven Oscar nominations, by the way, including Best Picture.