The other day, just for kicks, I was trying to make a mental list of all the directors, 30’s-60’s, whose work I admire. Guru Dutt. Akira Kurosawa. Hrishikesh Mukherjee. Bimal Roy. Raj Khosla (usually). And, of course, the inimitable Alfred Hitchcock. That led to another realisation: I haven’t seen, or reviewed, a Hitchcock film in months. Therefore this, an unusual Hitchcock in that it’s not a suspense film. Instead, it’s a ‘journey’ film, set in a lifeboat bobbing about on the high seas during World War II. 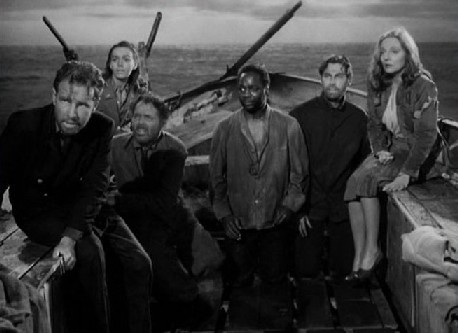 Somewhere in the Atlantic, a freighter on its way from New York to London has been torpedoed by a U-boat, which in turn has been blasted to the bottom of the sea by the freighter as it’s gone down. Not much is left of the freighter or its passengers: the camera pans over various odds and ends floating in the water—a magazine cover, a tennis racquet, medical supplies, fruit, a suitcase, wooden spoons… and finally comes to rest on the one intact lifeboat that’s afloat. In it, sitting serenely self-assured, poised and with not a hair out of place is the writer Constance ‘Connie’ Porter (Tallulah Bankhead). 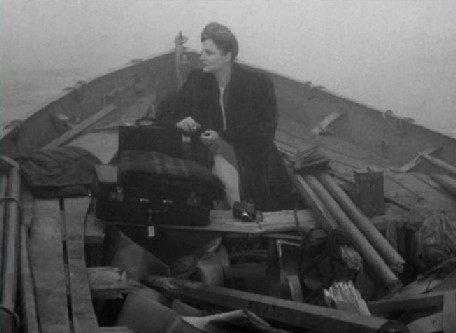 Connie is busy recording, through a video camera, everything that’s going on about her: even the approach of another survivor, clad in a life jacket and covered with oil, who staggers into the boat. This is Kovac (John Hodiak), who used to work in the engine room of the erstwhile freighter. 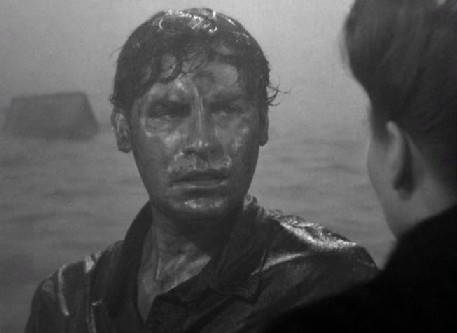 Kovac’s barely got his bearings and begun to give Connie a tongue-lashing for being so inhuman as to photograph the horror around, when they come upon more survivors. There is, to begin with, the freighter’s radio man, ‘Sparks’ (Hume Cronyn), whom Kovac hauls in, dripping with water and oil. 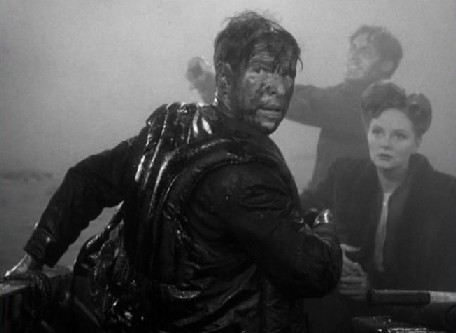 Next to come on board are two people who’ve got a badly injured man with them. The very wealthy Mr Rittenhouse (Henry Hull), who owns God knows how many factories and is well aware of his consequence—is one of them, and along with him is a young nurse called Alice (Mary Anderson). Between them, they’ve managed to save Gus (William Bendix), also a member of the crew. Gus’s leg has been hit by shrapnel and is bleeding all over the place. Once they’re in the boat, Alice tries to staunch the flow and remove whatever shrapnel she can, but it’s not much use. 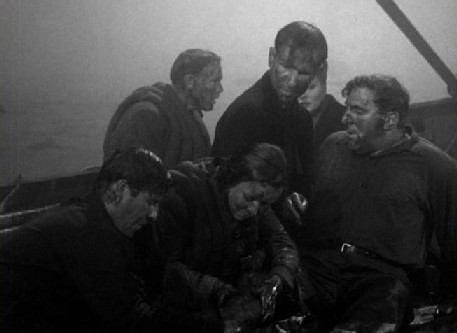 In the meantime, they’ve taken on more survivors: the steward, Joe (Canada Lee) has managed to rescue a young woman and her baby. The woman, Mrs Higley (Heather Angel) had been widowed in the bombing of Bristol and has ever since been shell-shocked. She’d been sent to the USA and was headed back to England—but the sinking of the ship has worsened her condition: Joe reports that when he found her, she was trying to drown her baby. 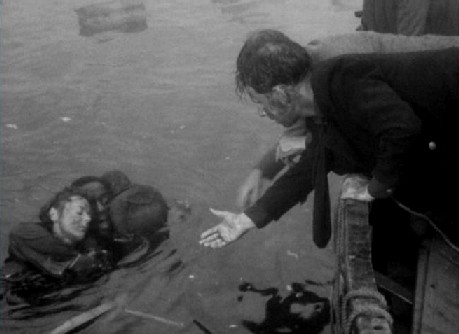 Sadly, Mrs Higley appears to have been successful: Alice tries to resuscitate the infant, but it’s gone. 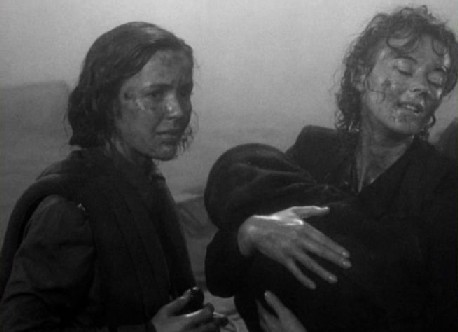 Finally, there’s one last addition to the company. Beefy hands grip the edge of the boat, and when the others pull and heave, a wet, greasy and exhausted man (Walter Slezak) tumbles into the boat. He sits up, blinks and finally gasps out his gratitude: “Danke schön.”
A survivor from the sunk U-boat. 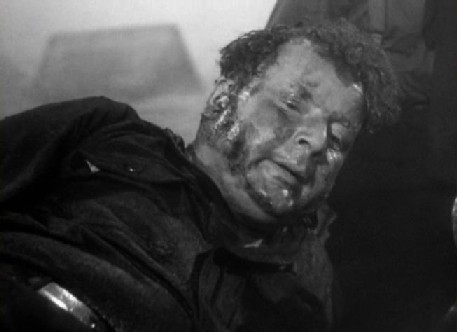 And so the stage is set and the players are in place. They’re an odd bunch of people—not exactly strangers, except for the German—but not all of them very close friends. Gus, Kovac, Sparks and Joe, by virtue of working on the freighter, know each other well enough. Joe knows Rittenhouse and Connie, and they are friends with each other. Poor Mrs Higley, traumatised by that long-ago shelling, drifts between searching frantically for her baby and lunging murderously at the German, accusing him of having killed it. 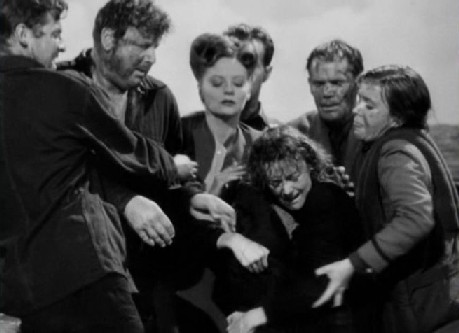 One night, huddled in Connie’s beautiful mink coat, Mrs Higley quietly slips over the side, leaving behind only a sad memory of herself.
This is just the start of their worries. A squall contaminates much of their water supply and washes away most of their food. Kovac and Rittenhouse nearly come to blows over who’s ‘commanding’ the lifeboat—Rittenhouse, used to ordering people about, seems to think it natural that he should be in charge. 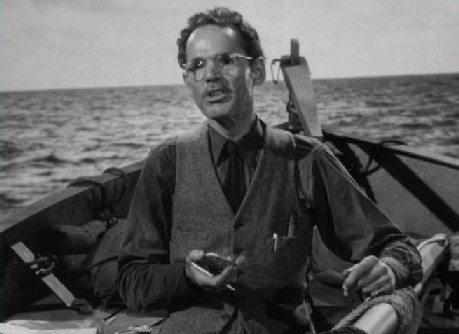 Even worse, Alice, checking on Gus, discovers that his leg is swiftly getting worse. She isn’t experienced enough to be able to diagnose it, but she thinks it’s gangrene. Surprisingly, the German confirms that. Through Connie, who acts as interpreter, he admits that he’s a surgeon and suggests that he be allowed to amputate Gus’s leg—it’s the only way to save his life. Gus is adamant that he won’t have it taken off; if his leg goes, how will he dance with his girl Rosie back home? Rosie lives to dance; if he can’t dance with her, she’ll leave him. 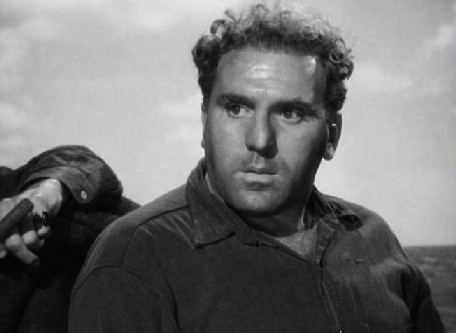 It takes Connie and the others some talking to convince Gus that Rosie will still love him, no matter what, and that there is no alternative.
So, in a heaving boat, with a bottle of brandy as anaesthesia, Gus’s leg comes off. And the nameless German, while not endearing himself with the rest of them, at least manages to earn their confidence. So much so that when he says they should sail in a particular direction to get to Bermuda—the nearest safe harbour—they do. 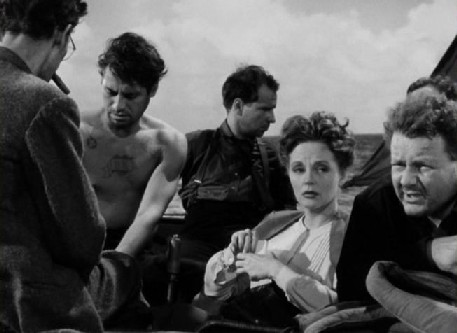 And they sail on, slowly getting to know each other, the enforced proximity bringing some people closer… 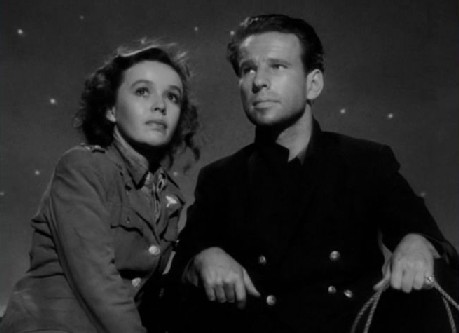 …while creating suspicion and antagonism between others. For some, this becomes a journey of hope, of possibly reclaiming a life that’s not gone quite the way it should; for others, like the unfortunate Gus, it deteriorates into a traumatic and miserable experience. What will it finally turn out to be? For some, if not all? How will it end? 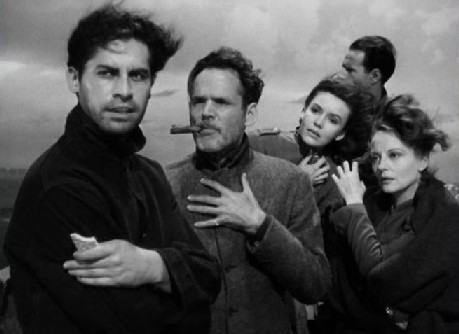 Lifeboat isn’t just a story (actually, the story angle isn’t the mainstay of the film anyway); it’s a very absorbing study of human behaviour. Between them, John Steinbeck (the writer) and Hitchcock (the director, and that too of similar ‘enclosed setting’ films like Rear Window and Rope) manage to make the confined space of a lifeboat the backdrop for a display of human emotions that range from jealousy to suspicion, pure and simple human kindness to deceit; friendship and affection to love and lust—and just about everything in between. We discover that the sophisticated Connie has something in common with the arrogant and devil-may-care Kovac, his chest tattooed with the initials of five women: 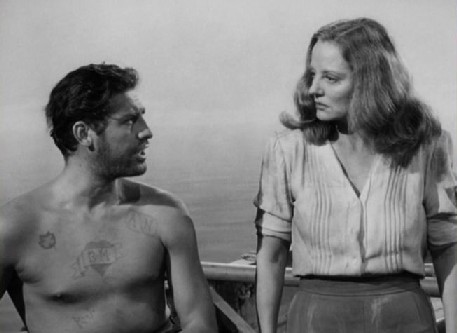 We find that Joe, gentle and sweet Joe, who plays the flute so beautifully, was once a very accomplished pickpocket—and hasn’t lost the knack. We learn why Alice was on her way to London, and why the German asks Connie the time, even though he apparently has a watch of his own… 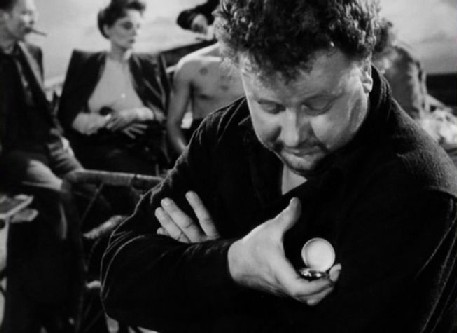 Tallulah Bankhead. I’d heard lots about this iconic actress, but had never seen her onscreen. Now I can understand how she got to be iconic. She’s brilliant as the hard-headed, sassy and successful Connie (who addresses everybody as “darling”) and who bemoans the loss of her typewriter, her camera and her mink coat, yet is very gentle when it comes to consoling Mrs Higley or lending a ear to Alice—and also surprisingly sensuous when it comes to Kovac. 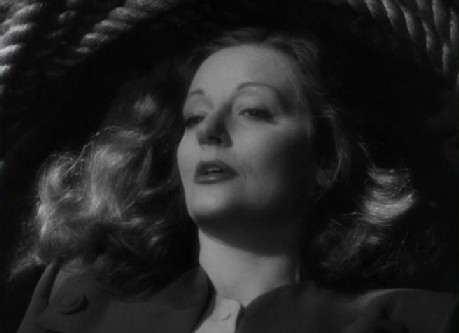 The last few minutes. Yes, there is an interesting and unsettling study in mob dynamics here, but the very last bit smacks of wartime propaganda. Back in 1944, this would have been pretty normal (and even expected), but no, I didn’t like that.