My major complaint against Hindi cinema has been that we’ve never given comedy the sort of status it’s received in the West. True, there has been the occasional classic comedy – Chalti ka Naam Gaadi, Dekh Kabira Roya, Dholak and Padosan, for example – but as a genre it seems to have been largely neglected. Which, in turn, has meant that comic actors have also often not been given due respect for their talents. Making people laugh is I think more difficult than making them cry: and Johnny Walker is one of the very few who’ve excelled at the art. Here, therefore, are some of his roles that I find the most memorable. All, of course, from films that I’ve seen. 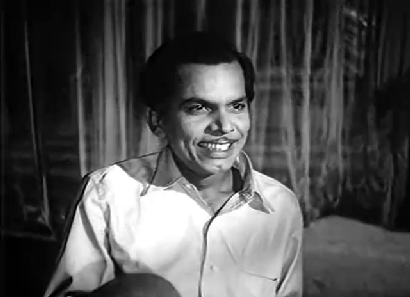 1. Teju in Shikaar (1968): The second role for which Johnny Walker won a Filmfare Award (the first was for Madhumati). Johnny Walker is inimitable in this one, as Tejbahadur ‘Teju’, Dharmendra’s servant, saddled with a spunky tribal girlfriend Mahua (played by Bela Bose) who drives our man batty. He, however, is always a step ahead (after all, as he says, he’s worked under everyone from Majnun to Raja Harishchandra, so is a master at everything, whether it’s romance or telling the truth!). Johnny Walker is brilliant in Shikaar, whether twirling a single stick or waltzing with Mahua’s belligerent father, or helping in an investigation: every moment that he’s onscreen, he’s pure gold. And yes, he’s got the dialect just so. 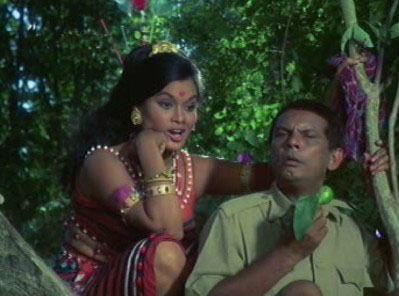 2. Baiju in Chhoomantar (1956): Johnny Walker gets the opportunity to play not just comedian, but also hero – and he plays it to the hilt, romancing a pretty heroine, singing songs and going off on adventures with a feisty ‘sister’, standing up bravely to villains who range from highway robbers to unjust rulers and Bombay underworld crooks… and taking time out to even shake a leg as the ‘famous danseuse’ Chhamiabai Kanpurwaali! Awesome. 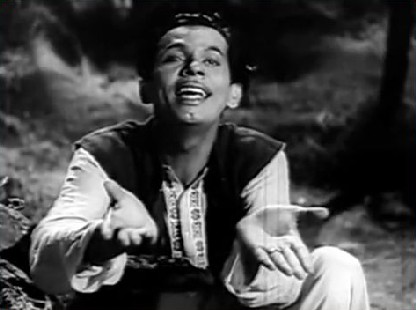 3. Parker in Mai Baap (1957): An unusual role for Johnny Walker, in that though he is comic, he’s also the villain of the piece. The smart-aleck Parker, along with his girlfriend Leela (played by the vivacious Minoo Mumtaz), swindles a simple, blind villager played by Balraj Sahni. A win at the lottery, and the villager becomes a rich man overnight, whom Parker sweet-talks into shifting to Bombay and donating pots of money to so-called charity. Johnny Walker makes for an interesting villain: crooked and cunning and certainly not a nice man, yet with a wicked sense of humour that sets him apart from so many other cinema crooks. And yes, this is the film which has his signature tune: “Main hoon Johnny, bada toofaani!” (“I am Johnny, the stormy Johnny!”) 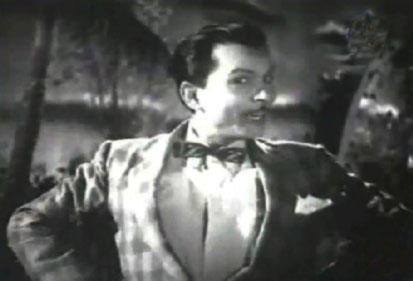 4. Johnny in Mr & Mrs 55 (1955): Even though the Pritam of Mr & Mrs 55 is nowhere as miserable as the Vijay of Pyaasa, he does have his problems: unemployment, penury, falling in love with a girl who loves another. And, just as Vijay had Abdul Sattar as a friend, so Pritam has Johnny to stand by him. Johnny, stalwart and staunchly loyal, who feeds Pritam, looks after him when he’s ill, gets him a job, even – when a desperate Pritam rigs things in order to hoodwink the law – helps him. He even gets the time to woo the very pretty Julie (Yasmin), with whom JW forms one of the best comic-romantic jodis of the 50’s! 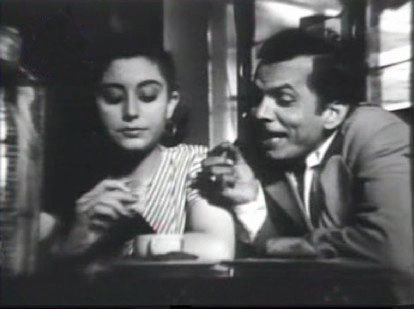 5. Abdul Sattar in Pyaasa (1957): “Sar jo tera chakraaye ya dil dooba jaaye, aaja pyaare paas hamaare” (“If your head’s spinning or your heart’s sinking, come to me, friend”) sings Abdul Sattar, Johnny Walker’s character in Pyaasa – and, oh, how appropriate. In the life of the poet Vijay, shunned and spurned by all, including his own brothers and the woman he loves, the one faithful friend is Abdul Sattar: good-hearted, cheerful, unfailingly loyal, so very Johnny Walker. 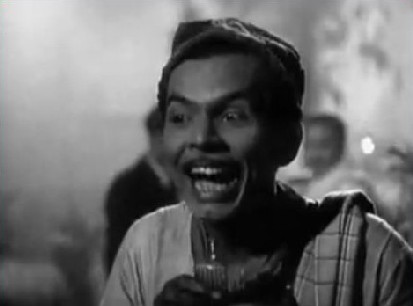 6. Charandas in Madhumati (1958): This was the role for which Johnny Walker received a Filmfare Award for Best Supporting Actor (beating Sohrab Modi for Yahudi and Rehman for Phir Subah Hogi). It’s a fine portrayal, and especially evidence of Kazi Sahib’s skill at playing intoxicated: Charandas is good at heart, but spends nearly all his time in a state of high inebriation! Even when he isn’t singing Jungle mein mor naacha, he’s lolloping along the mountain paths, climbing trees and seeing spooky spirits at every turn.
Tom Daniel, commenting on Hindi film comedians, once told me that he probably misses some of the humour because he has to rely on subtitles. For Johnny Walker, though, Tom had this to say: “I find him funny in any language!” Charandas is a superb example of the funniness that can make you laugh even if you don’t understand every word of the language. 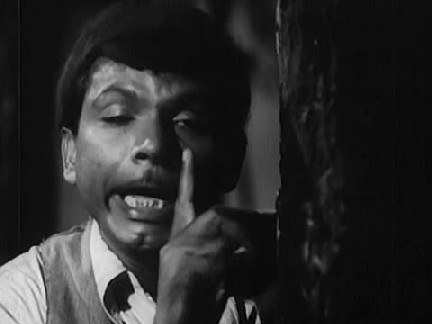 7. Master in CID (1956): Johnny Walker plays a pickpocket who admits to “using scissors” (which is why he’s called ‘Master’ – a contraction of the popular Hindi appellation, ‘tailor master’). He spends his time walking the tightrope between petty thievery on the one hand, and helping the CID on the other, and finds time in the middle to woo his firebrand girlfriend, played by Kumkum. Like Rustom of Aar Paar and Abdul Sattar of Pyaasa, this is another classic JW role. And it includes one of Johnny Walker’s most well-known songs. 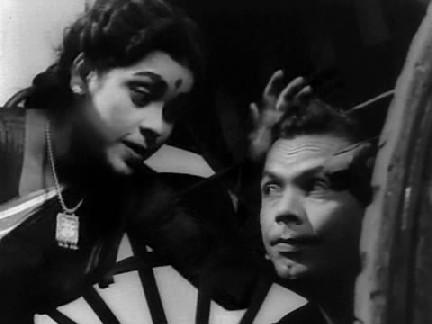 8. Rustom in Aar Paar (1954): I’ve been watching a lot of Johnny Walker over the past few days, and watching him play Rustom brought home the realisation that Johnny Walker is often underrated when it comes to versatility. Yes, funny; but funny in so many ways. Rustom, for instance, is also a Bombay man, also crooked and also street-smart, like Master. But that’s where the resemblance stops. There is about Rustom’s snappy dialogue delivery, his Gujarati-accented English, and the way in which he moves, something that’s so absolutely Parsi. What a very impressive bit of acting!

9. Badri in Anjaan (1956): Anjaan isn’t an especially good film; the story is so-so, the direction is nothing to write home about, and the music, though good, is not exceptional. The one good thing about Anjaan, though, is Johnny Walker as Badri, the hero’s friend. In the course of the film, we get to go carousing with the inveterate gambler as he dreams of winning a fortune; we see him pass himself off as the maharajkumar (prince) of a hill state; we see him dope two characters so thoroughly that he convinces them that the local air is foul enough to make them ill; and we see him come charging in to the rescue of the heroine while the hero is away getting beaten up by the goons. What more could one want of a supporting actor? Watch this film for Badri. And for this song, which actually features the name “Johnny Walker” in the lyrics. 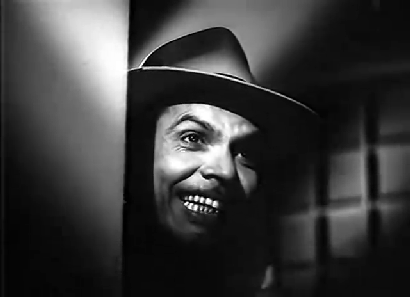 10. Isa Bhai Suratwala in Anand (1970): Anand is known for so much: Rajesh Khanna’s acting. Amitabh Bachchan’s acting. Hrishikesh Mukherjee’s very sensitive, very poignant direction. Salil Choudhary’s music. And this, one of the finest cameos I have ever seen. Johnny Walker has very little time onscreen in Anand, but he makes his presence felt as the madcap Isa Bhai, who goes along with Anand‘s (or should that be Jaichand’s, since that’s the name Isa Bhai uses for him?) little farce. He’s laugh-out loud funny as the small-time theatre company wallah who’s always game for yet another gag – but he has the depth and the sensitivity that makes this another unforgettable Johnny Walker performance. 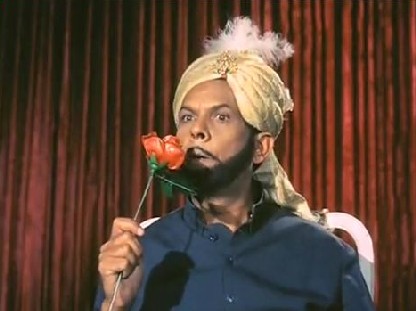 Which are your favourite Johnny Walker roles?