What with having watched the Fearless Nadia-starrer Baghdad ka Jaadoo (‘Magic of Baghdad’) the other day, I was in the mood for more swashbuckling ladies. This film, starring Jean Peters as a pirate, seemed—at first glance—to fit the bill. It turned, or so it appeared, well-loved pirate film clichés on their heads: the pirate is a woman, and a heartless one at that, who delights in making innocent people walk the plank. And no, she isn’t a female Robin Hood, actually on the side of justice. She even—in a neat twist of the usual pirate film—captures a handsome man. 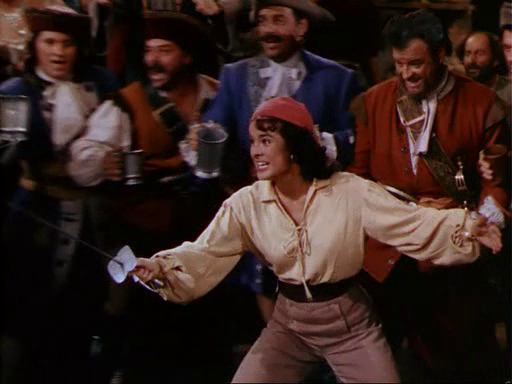 Anne Providence (Jean Peters) is the orphaned daughter of a Spanish woman and an Englishman; she has never known her father, and owes her last name to the fact that she was born in Providence. Anne’s mother is dead, and her only other relative—her brother—has been killed by the English. Anne, therefore, has decided to wreak vengeance on the English. As captain of the Sheba Queen, Anne attacks all English vessels she meets, murders the crew and loots all she can.

Anne’s mentor and foster-father is the fearsome pirate Blackbeard (Thomas Gomez), who’s brought up Anne, made her captain of a ship, and now keeps a benevolent eye on his little girl.

On board, two people act sort of in loco parentis to Anne: Dr Jameson (Herbert Marshall), educated and wise and constantly trying to keep Anne on the straight and narrow—as much as he can—and the Scotsman, Red Dougal (James Robertson Justice), who’s just as wild as Anne, but is also fiercely loyal to her. 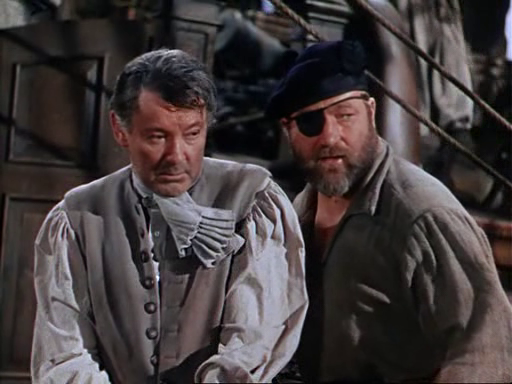 The real story begins one day when Anne’s ship meets and attacks an English merchant vessel. Anne has been amusing herself by making the crew walk the plank, when her own crew bring a man they’ve found imprisoned in the hold of the ship. He’s a ragged specimen, who introduces himself as Pierre Francois (Louis Jourdan) and says that the English had taken him captive because he had been privateering. 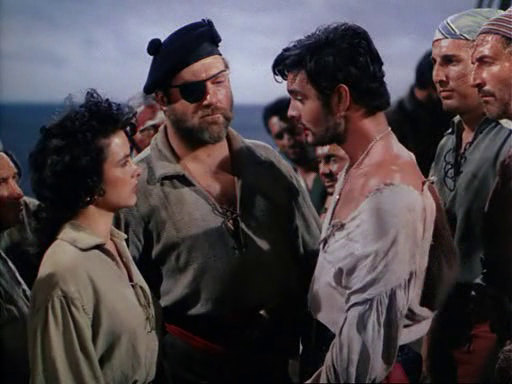 Anne is obviously somewhat intrigued by Pierre—so much so that instead of skewering him with her sword or making him walk the plank, she takes him on as sailing master. Cleaned up and shaved, he’s even better looking, and Anne is soon having a hard time keeping up that tomboy image.

The next port of call is Nassau. When Anne mentions that all crew members will go ashore, and that she will meet Blackbeard in Nassau, Pierre is reluctant. He doesn’t want to meet Blackbeard.

Anne doesn’t listen to Pierre, though, and makes him come along with her to meet Blackbeard. Blackbeard, in turn, takes one look at Pierre and thinks he’s seen him somewhere. Pierre and Anne give Blackbeard the story of Pierre having once been a privateer, but Blackbeard’s sceptical. Soon after, Pierre slips out and away.

That night, long after the rest of her crew has gone to bed, Anne stays up—and along with Dougal, catches Pierre sneaking onto the ship. When she questions him, Pierre clams up and won’t say what he’s been up to, wandering in Nassau late at night. Anne, well trained by Blackbeard, shows her true colours as pirate queen: she has Pierre chained and flogged till Dr Jameson pleads for his life. Anne eventually relents—she is, after all, pirate queen in a Hollywood flick—and stops the flogging. But she has the doctor search Pierre’s cabin, and Jameson finds something interesting: a map.

Some studying of the map, some educated guesses and some discussion, and they’re able to figure out what the map is all about. Years earlier, the pirate Henry Morgan had made off with a huge treasure, only part of which is accounted for. Morgan is long dead and nobody knows where he’d hidden that treasure—except, it seems, the man who drew the map. Pierre, it appears, has a map that points the way to Henry Morgan’s treasure.

But the map isn’t complete. Anne tries to get Pierre to tell her where the rest of it is, and he finally gives in, on the condition that Anne and he will be equal partners in the treasure they find. The rest of the map is with a Carib who lives in Port Royal. Pierre had planned to go to Port Royal, get the rest of the map, piece it together, and go find Henry Morgan’s treasure. So Anne, leaving Pierre to recuperate in Dr Jameson’s able care, changes course for Port Royal.

En route, she and Pierre fall in love… 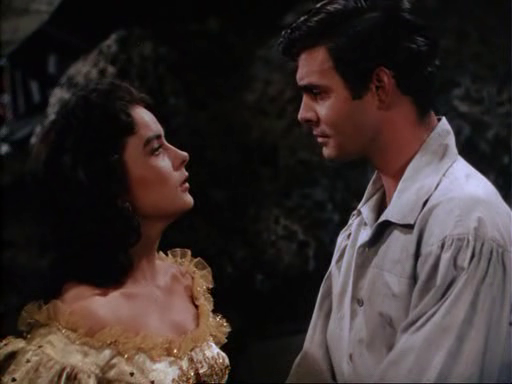 … and Blackbeard, chancing upon them while they’re anchored at an island for repairs, suddenly remembers where he’d seen Pierre before. This man is not a privateer. He is a naval officer whom Blackbeard once knew as Lieutenant Pierre Francois La Rochelle. He has killed God knows how many pirates. Anne’s brother, too.

Pierre, however, speaks up in his own defence. He didn’t kill her brother; and he was cashiered from the navy for refusing to obey orders. That’s why he became a privateer. He insists he hasn’t lied to Anne; he didn’t tell her about the navy because the navy doesn’t acknowledge him anymore. 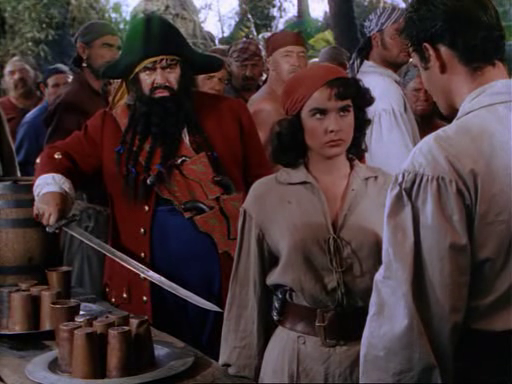 Anne believes Pierre, and in a sudden departure from her usual adulation of Blackbeard, now draws a sword on her old mentor when he attacks the unarmed Pierre. Blackbeard’s surprised, but Anne and her men manage to push the old pirate and his crew off the island. Blackbeard goes, spewing curses: someday he’ll have his revenge on Anne.

The Sheba Queen reaches Port Royal, and at night, a small boat sets off from the ship, bound for land. Pierre, having been given a loving farewell by Anne, is on board, off to meet the man who possesses the other part of the map…

…then why does he stride so blatantly into the tavern frequented by the officers of the English navy in Port Royal? Why does the waiter who sees him say “Captain La Rochelle!”? And why does Pierre, instead of going away to search for a Carib, head upstairs to one of the rooms? And who is the beautiful young woman (Debra Paget) who comes into his arms, and whom he kisses so passionately? 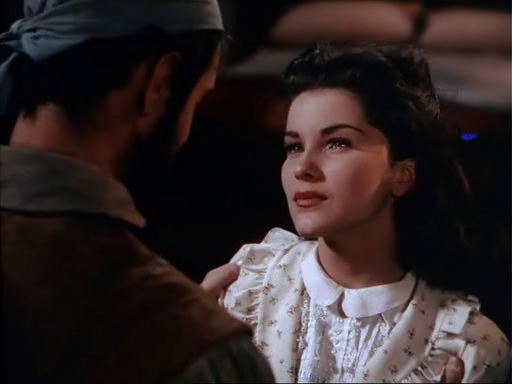 The prettiness of it all. Jean Peters and Debra Paget are lovely, and Louis Jourdan is one of my main reasons for thinking European men are the best thing that happened to Hollywood since sound. Gorgeous.

Jean Peters’s portrayal of Captain Providence. She’s good at the swashbuckling—there is, for example, a fine duel between her and Blackbeard—but besides that, there’s something rather hammy about the curling lip and flashing eyes.

Other than that, I have to admit there’s little I could pinpoint as being something I really hated. Okay, there are clichés here, but then there are also—as you can see, above—sudden twists and turns that relieve the predictability of the plot. That, perhaps, is what makes me so ambivalent about Anne of the Indies. It is, at times, an unusual film as far as the behaviour of its hero, and (though only to some extent) its heroine are concerned. Anne is enough of an ‘anti-heroine’ to have the man she loves flogged (and worse); she cold-bloodedly kills people and has no compunctions about looting and plundering. On the other hand, there is the utter predictableness that attaches to Hollywood film heroines of the period: she must fall in love with the handsome man she’s captured, she has a deep sense of honour, and ultimately, she’s a good, upright woman whose heart rules her head.

Not a great film, but not bad either. I’ve seen better pirate films, and I’ve seen both Jean Peters and Louis Jourdan in better films. But this is decent enough viewing if you’re keen on seeing a lady swing a mean sword.