I spent a bit of last Sunday at Delhi’s Okhla Barrage Bird Sanctuary. The barrage on the Yamuna hosts a vast number of migratory birds through the winter. Most of them are gone by this time of the year, but there’s plenty of bird life still to be seen:

The sight of all those lovely birds reminded me of all the great ‘bird songs’ we have in Hindi cinema – a motif, oddly enough, that’s endured into relatively recent times, what with the (to me, excruciating) Kabootar jaa jaa and Chhat pe kaala kauwa baitha. Birds have always been very much a part of Hindi film songs. With lovers being likened to parakeets and mynahs, or a pair of swans; or a pining lover being assigned the role of a chukar partridge yearning for the moon (not something I have ever heard of a bird doing). Or, more commonly, pigeons and crows and kites and whatnot. 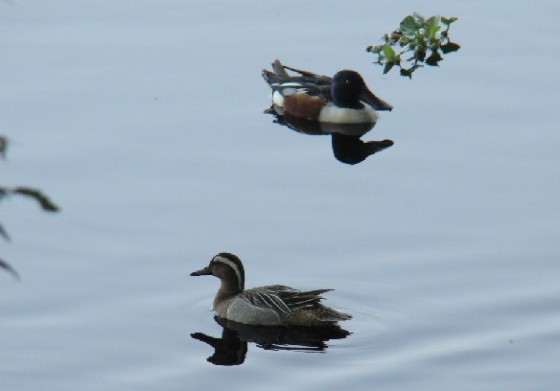 So. Inspired by all these birds, I’ve come up with my list of ten songs that feature birds, or names of birds. They’re all pre-70s songs (though, admittedly, birds were alive and kicking through the 70s too: remember Jhooth bole kauwa kaate? Remember Ek daal par tota bole? Or Tota-mynah ki kahaani toh puraani?). They’re all from films I’ve watched, and they’re all species-specific. No generic panchhis here. (Though, to be fair, there are some awesome songs on those too: Chal ud jaa re panchhi, Jaa re jaa re ud jaa re panchhi, Panchhi banoon udti phiroon mast gagan mein, etc. Another post).

And to make it more difficult for myself, I decided this had to be ten different birds. No repeats.

1. Suno sajna papihe ne (Aaye Din Bahaar Ke, 1966): While the papiha (the hawk cuckoo, better known as the brain-fever bird) got labelled a gossipy tittle-tattle in Fariyaad, this song assigns the bird a kinder role – as the harbinger of spring. Interestingly, it is believed that the papiha’s call is actually ‘pee kahaan’ – Hindi for ‘where is my love?’, good enough reason for lyricists to want to feature it in love songs. I love this song; Lata sings it very well, it has beautiful music (and bird call-like notes too!); and the picturisation includes two of my favourite people.

2. Jangal mein mor naacha (Madhumati, 1958): Those of you who’ve been reading this blog for a while probably know how much I love this song. It’s brilliantly picturised, the music’s awesome (as if Rafi’s voice, tripping along in that drunken but perfectly in sur way) and Johnny Walker is at his absolute best. It is also delightful evidence of the fact that a peacock, dancing, can draw people’s attention off just anything possible.

3. O meri mynah tu maan le mera kehna (Pyaar Kiye Jaa, 1966): What a peppy, cute song – from Mehmood and Mumtaz’s dancing to Manna Dey’s and Usha Mangeshkar’s rollicking singing. And it celebrates the feistiest of India’s more ubiquitous birds. (I’m assuming it’s the common mynah Rajinder Krishan was referring to when he wrote this song).  Mynahs have oodles of character – you can see it in those sharp-eyed little faces, and in the nonchalance with which they peck on the fringes of roads, just inches from speeding trucks. I’d say it’s quite a compliment to be called a mynah by one’s beloved.
Just one niggle: why the cross-species romance? I have never seen a mynah and a parakeet (or a pigeon) billing and cooing together.

4. Cheel cheel chillaake kajri sunaaye (Half Ticket, 1962): Also one of the most amusing train songs there is, this one’s a fabulous little tableau of life in a train carriage: the lovers cooing among themselves; the lalaji whose paunch is ample evidence of a life lived well; the crook being carted off by the police; and the madcap passenger who will entertain everyone. A completely whacky Kishore Kumar is accompanied and assisted by a handful of merry children and a dholakwallah as uninhibited as Kishore Kumar himself. Little detail: the dholakwallah, in this song where “jhoom-jhoom kauwa bhi dholak bajaaye” (“the crow plays the dholak merrily”) has a face as angular and sharp as a crow’s!
Oh, and a record four species of birds is mentioned in this song: the black kite (cheel), crow (kauwa), parakeet (tota) and mynah. Since the cheel is the most prominent in the lyrics, that’s the species I’m going to ‘allot’ this song to.

5. Ek tha gul aur ek thi bulbul (Jab Jab Phool Khile, 1965): Though both Kismet (1943) and its remake Boyfriend (1961) had a song each in which the loved one was likened to a bulbul, this is the quintessential bulbul song – it’s about a bulbul that makes the fatal mistake of falling in love with a flower. And I thought cross-species romances were a bad idea; this would be doomed from the word go. But the essence of the song seems to be that if one loves another, that love should be as lasting and true as that of the bulbul’s and the flower’s.
Whatever; the music’s good, the scenery’s awesome, and Rafi is at his best. And there really aren’t too many songs out there that are stories about birds. 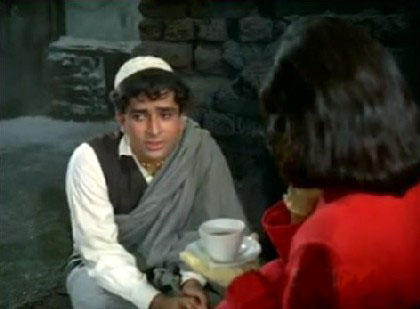 6. Kuchh din pehle ek taal mein (Laajwanti, 1958): A comparatively little-known Nargis/Balraj Sahni film, but with great music—including this song, which is yet another story featuring birds. It is also the story of our tragic heroine, who chooses to recount the sorrow of her life to a group of cute little kids, who all end up weeping as a result of the story. I don’t care for the unhappiness here, but the music, and Asha Bhonsle’s rendition of the song, are wonderful.
Coincidentally (or are swans such everlasting symbols of fidelity in Indian tradition?), Do hanson ka joda from Ganga-Jamuna is also about a pair of swans that is separated by fate.

7. Kaahe koyal shor machaaye re (Aag, 1948): Nargis again, but a younger, more girlish Nargis, singing now in the voice of Shamshad Begum. She’s on a stage, surrounded by silent lookers-on, men operating the lights and watching her critically, but her angst at the noisy koel—whose call serves to remind her of her lost love—looks very real indeed. A short song, and there’s something rather gawkish about Nargis (and I must admit to not liking Aag at all), but the song is good. 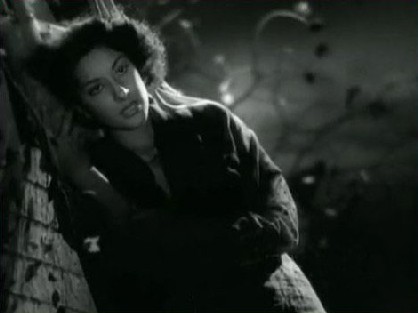 8. Bhor hote kaaga (Chirag, 1969): Another song-on-a-stage, and (a first in this list!) the bird in question actually spends a good bit of time onscreen. It is a stuffed crow, from what I can tell—its ‘flying’ is definitely artificial, and the aplomb with which Asha Parekh sweeps it off the wall couldn’t have been possible with a live, sharp-beaked crow. But there’s a hint here of the crow’s legendary canniness: our heroine believes this crow to have the ability to tell her who will come visiting her village!

9. Chalat musaafir moh liya re (Teesri Kasam, 1966): Someone commented on another of my lists the other day, saying that it’s unreasonable for me to confine my lists to songs from films that I’ve seen, because films are often hard to get hold of, and songs can be appreciated in isolation too. True. But sometimes you can appreciate the song more fully if you know the context. This wonderful folksy Manna Dey song, for instance, is (on the surface) about a cage-bound munia that manages (how?) to savour the best of life, by alighting at the shops of a sweet-seller, a paan-seller and a cloth-seller. But if you look behind the words, there’s also the bitter-sweet reference to the beautiful Heerabai, the dancing girl who is caught in the cage of her own profession. She too wants to have it all, but will she? Will her cage not keep her bound? 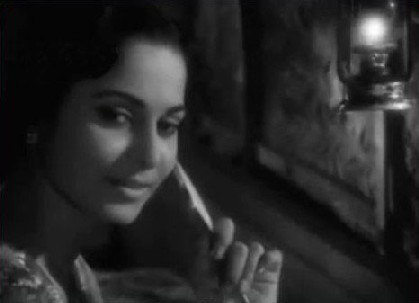 10. Murge ne jhooth bola (Manmauji, 1962): I don’t suppose any self-respecting bird watcher would put a rooster on his or her list of birds spotted, but anyway: a rooster too is a bird, so it qualifies for this list. Like Cheel-cheel chillaake, this song too features more than one bird: there’s a crow and a sparrow (referred to as a ‘chidiya’, though a sparrow is, strictly speaking, a gauraiyya). And both the rooster and the sparrow are wicked birds: one’s a liar and the other’s a thief.
The kiddie version of the song, with live birds instead of models, is worth a look too.

Do you have any favourite bird songs? And do you know of any other songs featuring birds of species other than the ones I’ve listed? (I can think of two, but both from films I haven’t seen: Chaand ko kya maaloom chahta hai use koi chakor from Laal Bangla, and Teetar ke do aage teetar from Mera Naam Joker). Oh, and there’s Kabootar, kabootar from Dillagi—a film I’ve seen and rather like, but a song I find irritating.

128 thoughts on “Ten of my favourite bird songs”