To begin with: don’t bother with this quiz; it isn’t valid any more (see my next post for the quiz that’s now THE quiz). You can scroll down to the end of this post to see the answers to most of the questions (the ones that didn’t get correctly answered are part of the latest quiz).

But first, an announcement regarding a mini project this blog’s been on.

Back in May this year, I set a target for myself: to create a series of posts, each of which would be linked to the post preceding it, and the post succeeding it, in some way or the other. Posts could share common themes, genres, crew (directors, writers, actors and actresses, whatever), or – well, just about any logical connection. I decided I’d continue until I either:

(a) Ran out of ideas, or
(b) Closed the loop – that is, ended up with a post that somehow connected with the post that began the series. 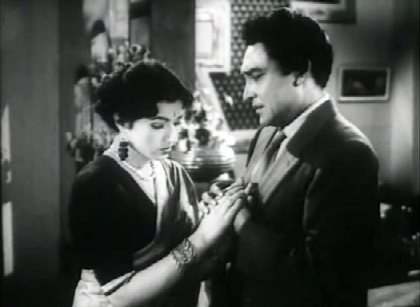 Want to see the journey? Here it is:

1. Ek Saal (1957; story suggested by an idea by I S Johar)
2. North-West Frontier (1959; starred I S Johar; the bulk of the film was set on a train)
3. Ten of my favourite train songs (All set on trains, of course – throughout!)
4. The Train (1970; continuing with the train theme…)
5. And Then There Were None (1945; a suspense film, the same genre as The Train)
6. Gumnaam (1965; based on And Then There Were None)
7. The Hound of the Baskervilles (1939; like And Then There Were None and Gumnaam, a film that was based on a suspense novel and spawned a Hindi remake)
8. Bees Saal Baad (1962; inspired by The Hound of the Baskervilles)
9. Ten of my favourite Waheeda Rehman songs (since she was the lead actress in Bees Saal Baad)
10. Some thoughts on the songs of Pyaasa (…featuring one of the songs that figured in the previous list)
11. Metropolis (1927; like Pyaasa, Metropolis too was listed in Time Magazine’s all-time 100 best films list)
12. Der Tiger von Eschnapur/Das Indische Grabmal (1959; directed by Fritz Lang, who also directed Metropolis)
13. Kohinoor (1960; a raja-rani [or ‘king-and-queen’] genre film, like Der Tiger von Eschnapur and Das Indische Grabmal)
14. Prince of Foxes (1949; swashbuckler and romance like Kohinoor; also has a scene almost exactly the same as in Kohinoor)
15. Humayun (1945; features a character – Babar – who was almost a contemporary of Cesare Borgia, an important historical character in Prince of Foxes)
16. Rajkumar (1964; same genre – ‘raja-rani’ – as Humayun, though this post was more a tribute to Shammi Kapoor, who passed away on August 14, 2011)
17. Tumsa Nahin Dekha (1957; the first hit film of Shammi Kapoor, the star of Rajkumar)
18. Mere Sanam (1965; a plot similar to Tumsa Nahin Dekha)
19. Rustom-e-Hind (1965; also starred Mumtaz, who acted in Mere Sanam)
20. Aan (1953; a ‘raja-rani’ film, like Rustom-e-Hind)
21. My Family and Other Film Fanatics (about my family and our connections to/comments and distortions of, cinema – since Aan was a film we all had something to say about!)
22. Introducing ‘Kumar Sahib’ (About my uncle, David Vernon Kumar, who was a guitarist at Filmistan – our family’s real connection with filmdom)
23. Mahal (1949; a film for whose best-known song, Aayega aanewaala, my uncle played)

That’s it. Twenty-three posts, and the loop’s closed.

So, now for the quiz. I’d been wanting to do something interesting on this blog for a while, so decided this would be it. Ten questions, on Hindi cinema from (mostly) before the 70s. Some are sitters – almost anyone with any knowledge of film trivia will know the answers to these. Some may be a bit trickier.

The rules for submission:

You can post your answers my mailing them to me (if you have my e-mail address). If you don’t have my e-mail address but would like to send me the answers, just leave a note to that effect in the comments; I’ll send you a mail so you can respond to it. (P.S. If you’re wondering why the change in the rules: just to make it less irritating for people who want to participate fairly!)

And now, the prizes:

1. A signed copy of my latest book, The Eighth Guest & Other Muzaffar Jang Mysteries (if you want it! Or, if you’ve already read it/borrowed it/bought it and would like to read more of my writing, you can instead ask for a copy of my next book – one is due for publication early in 2012, another later in 2012).

2. The chance to dictate which theme I choose for my next ‘Ten of my favourite songs’ list.

Now for the questions.

1. In the film Detective (1958), what is the profession of the character played by Pradeep Kumar?

2.  In Pakeezah (1972), which dancer/actress stood in for Meena Kumari in some of the long shots?

3. Which was Sahir Ludhianvi’s first ghazal to be recorded as a song in a Hindi film after he came to Bombay and joined the cinema industry?

5.  Two films—one made in 1957, the other in 1963—had the following dialogue. In each case, the dialogue is between the hero and the heroine’s friend:

Name the two films.
(Hint: Both conversations occur between the hero and the heroine’s friend, in the presence of the heroine).

6. In which song from a 1962 film (starring Kishore Kumar) did Kishore sing playback for both the male and the female parts in a ‘duet’?

7. To whom did dancer/choreographer Sitara Devi say, “Why do you want to learn to dance? You only have to move your hands about, and it looks beautiful.”?

8. A lake in Alpenrausch, Switzerland, is unofficially named after an Indian director. Who?
(Hint: I have reviewed one of his films on this blog).

9. In a single year, Kalpana played a girl named Neena who falls in love with a man named Preetam, in two films. Name the films.

10. In Pyaasa (1957), what was the name of the character Vijay’s first published collection of poems?

Good luck, all! I’m waiting to see your answers!

Updated nearly 5 hours later with this:

Okay, everybody… since this quiz went a bit off the rails, I’m revealing the answers that both AK and/or Ravi got right. Sorry, guys: you don’t get the prize because this quiz got invalidated – my fault, too, because I should have made it mandatory for people to not write the answers in the comments section. But there’s a new quiz up, so try your hand at that! (And, mail me the answers – if you don’t have my mail ID, ask for it).

For now, the correct answers for some of the questions above. (Note: I’m carrying forward questions that were incorrectly answered, so I’m not including those answers here)

Questions #1, 3, and 5 haven’t been answered correctly yet.

So, head off to the next quiz to try your knowledge of classic Hindi film trivia there!

Which famous cinema personality appeared in a cameo role as a boatman alongside Premnath, in the song Naiyya teri majhdhaar in Awara (1951)?

30 thoughts on “How about a ‘Classic Bollywood’ quiz?”