And, oh. What a film. What a wonderful combination of humour, emotion, heart-breaking sorrow—and hope. It’s been a long, long time since I saw a new film that made me gush so much. (Yes, well; that probably also had a lot to do with the fact that the gorgeous Jean Dujardin is very gushworthy).

Anyway, the reason I’m reviewing the 1920 The Mark of Zorro here (and not The Artist) is that no matter how charmingly ‘old’ The Artist may be, it’s technically a new film. And I nit-pick about things like that. But there’s a connection between the two films. Firstly, of course, the fact that both are silent. Secondly, Jean Dujardin’s character in The Artist is a silent film superstar named George Valentin—who was modelled on Douglas Fairbanks, the star of The Mark of Zorro.
Thirdly, there’s a scene in The Artist where a now-failed George Valentin watches an old swashbuckler in which he starred.

That scene came on—obviously from an actual silent film, slightly jerky and the print not as sharp as that of The Artist—and I grabbed my husband’s arm and whispered, “That’s The Mark of Zorro!” They’d morphed Dujardin’s face where Fairbanks’s face should’ve been, but I’d have recognised that particular scene anywhere.

So, The Mark of Zorro it is. A film that’s close to a hundred years old now, not in the same league as some of the other silent films I’ve watched, but an enjoyable swashbuckler nevertheless. And it’s a good example of the sort of films that Douglas Fairbanks excelled at (and which George Valentin in The Artist specialised in, too). 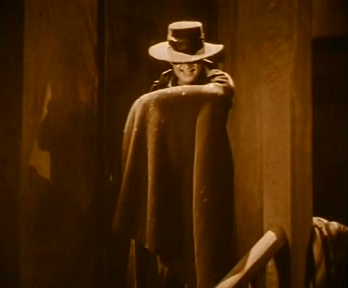 The Mark of Zorro begins with a succession of intertitles which establish the background: in Capistrano, Southern California, the poor natives and the priests have been oppressed and ground into the dirt for far too long. Now a mysterious masked stranger has come to their rescue. He calls himself Zorro, and has being going around doling out punishment to the perpetrators of all this injustice. This includes marking the evildoer with Zorro’s signature—a Z.

The governor has decided to set out for Capistrano to investigate the matter for himself. In the meantime, though, Sergeant Gonzales (Noah Beery) has been going about boasting that Zorro had better keep out of Gonzales’s way, otherwise Gonzales will carve ‘Gonzales’ all over Zorro.

In the midst of this bragging, a young nobleman, Don Diego Vega (Douglas Fairbanks) arrives. Don Diego has returned three months earlier from Spain, where he had gone to study. He’s a limp-wristed, silly creature who drags his feet, snorts snuff, amuses himself by playing with a scarf, and generally seems like a halfwit. 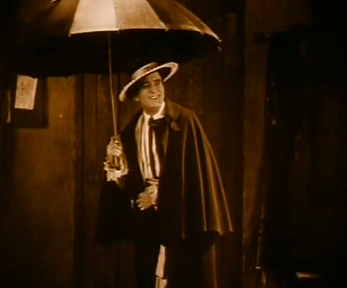 Don Diego takes himself off after a while, and Gonzales goes back to plotting the downfall of Zorro. One of his men suggests that the best way to bait Zorro is by ill-treating a native, so Gonzales does that—he knocks down a servant at the inn where they’re drinking.
And sure enough, while the man is still grovelling for mercy—Zorro appears. Zorro doesn’t attack Gonzales, though; instead, he goes to the wall, where he sees the notice Gonzales’s boss, Captain Ramon, has posted: 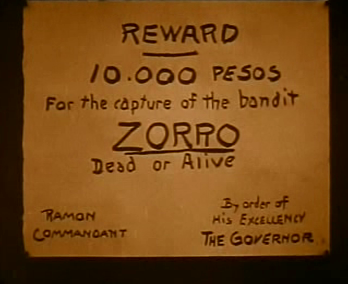 Zorro whips out his sword, cuts the notice to shreds, and leaves his own mark instead. He then proceeds to take on Gonzales in a swordfight that swiftly becomes an utter disaster for Gonzales: Zorro runs rings around the sergeant (Gonzales wails: “How can I fight a man when he won’t stand still?”). He leaves his mark on Gonzales’s trouser seat; he punctures a wine skin above Gonzales’s head, drenching the sergeant; he sends Gonzales’s sword tip plumb bang into the ceiling, out of Gonzales’s reach… and has a glass of wine while waiting for Gonzales to get his sword back.

After having sufficiently humiliated the bumbling sergeant, Zorro comes back home, to his faithful mute servant Bernardo (Tote du Crow). He takes off his mask, and we discover that Zorro is—Diego!

Diego has barely changed into his everyday clothes when he’s summoned by his father, who gives Diego the news that he’s decided it’s time for Diego to get married. He’s even picked out the girl: Lolita (Marguerite de la Motte), the daughter of Don Carlos Pulido (Charles Hill Mailes). The Pulidos are blue-blooded as they come, but are so poor, they’ve gratefully accepted Diego as a prospective son-in-law.
[This last bit, told to Diego by his father, is hardly a tactful thing to say. Makes me feel sorry for poor Diego].

As per his father’s instructions, Diego goes to the Pulidos’ home the next day, to pay court to Lolita. He is his usual weak-kneed, lazy self, sprawling at the table and trying to amuse her by showing her scarf tricks. Lolita is not impressed at all. In fact, she’s downright repelled. (“He isn’t a man, he’s a fish!” she tells her mother). But he’s also invited the Pulidos to come and visit his home, so Lolita’s parents decide to accept that invitation. It’ll give Lolita a chance to see all the grandeur of the house she’ll be occupying once she marries Diego.

When her fiancé has taken his leave, Lolita goes out into the garden and drapes herself over a bench, bemoaning her fate… and who should turn up there, but a mysterious stranger whom she immediately realises is Zorro!
Zorro begins to woo Lolita with consummate charm [and rather flowery poetry]:

And Lolita falls in love with him.

But their bliss is very short-lived. A bunch of troopers, led by Captain Ramon (Robert McKim), rides up to the Pulidos’s home, and Lolita urges Zorro to flee.
[There’s a back story here, re: Ramon’s arrival. The Pulidos, seeing Zorro in the garden with Lolita, have summoned Ramon and his men. Now that Ramon arrives and begins badmouthing Zorro, Lolita’’s mum looks disapproving. She can’t make up her mind, the mad old cow that she is.] 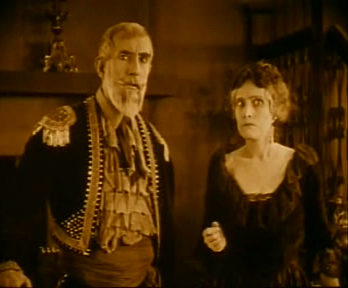 Just as the Pulidos and Ramon are debating the Zorro question, the masked hero himself appears at the window. Long enough to sneer at Ramon, issue a challenge at him, fling a rose to Lolita—and vanish.
The next day, the Pulidos go off to visit Diego’s house. He’d told them he wouldn’t be home, but his servants will look after them. 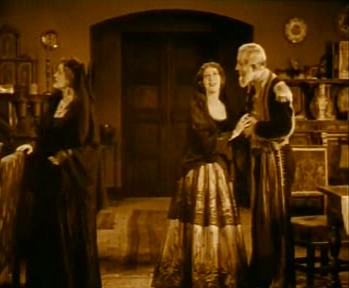 …which is all very well, except that Ramon arrives while Lolita’s parents are out. And he immediately starts making passes at Lolita.
Thankfully, even if Diego isn’t in the vicinity, Zorro is—and he leaps in to protect Lolita’s virtue. 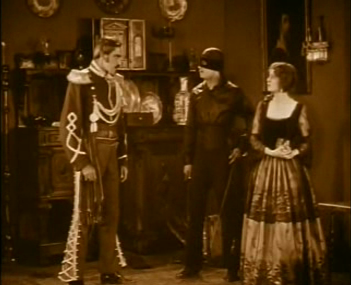 When will Lolita realise that this man: 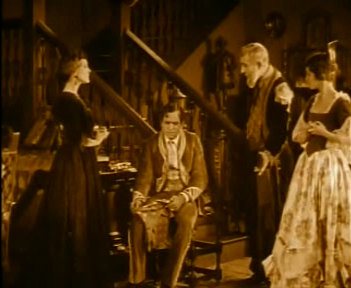 …are actually the same? When will Zorro be able to rid Capistrano of Ramon, Gonzales and their like? How will a single masked crusader be able to overcome so many?

Douglas Fairbanks in swashbuckling mode. Yes, I know swashbuckling was what he did, but you have to watch this film to see how beautifully he did it.  As Zorro, he leaps, runs, swings, wields a sword and fights as if every move was choreographed. He’s unbelievably graceful. And the contrast  between Zorro and Diego is fascinating: as Diego, Fairbanks is all that Zorro isn’t: Diego slumps, he’s round-shouldered and sleepy-eyed and just too much of a dimwit for anybody to bother with. His body language is the absolute opposite of Zorro’s.

The humour. There’s a wry sense of humour in a lot of Diego’s dialogues, and sprinkled through the fight scenes are cheeky little jokes that made me grin. For instance, there’s a scene where Zorro is being chased by a group of troopers. He goes leaping over a pig sty, and the troopers follow—but one can’t; his belt gets stuck in a bit of wood projecting above the rail of the sty. So Zorro shakes off his pursuers, doubles back and helpfully sets the man free—all without the man realising who his ‘rescuer’ was.

The story begins to drag a little after the midway mark, with some fairly pointless meandering happening. It’s not unbearable, but I did find my attention beginning to wander.

Some of the acting (especially that of the women) is a little too theatrical.

This had to happen. And no, I’m not comparing The Mark of Zorro to The Artist. I’m comparing it to The Mark of Zorro (1940), starring Tyrone Power, Linda Darnell and Basil Rathbone. The basics of the story are the same (even the names of the main characters are the same) but there are some differences in how the story plays out. For instance, in the later film, Lolita is an orphan and lives with her uncle (a puppet official, controlled by his evil aide) and her aunt, who is soon infatuated with Diego.

The 1940 film has much less humour than was there in the 1920 one, but it’s a sleeker, better scripted film. For example, instead of ‘telling’ us why Zorro emerged as a crusader (which is how the 1920 film begins), the 1940 films begins by showing how Diego came home from Spain, and what he saw and heard that made him decide to become Zorro. More effective, in my opinion. The 1940 film also has fewer digressions.

Where the 1920 film does win is with Douglas Fairbanks’s athleticism. Tyrone Power is very good with a sword (Basil Rathbone famously said that “Tyrone Power could fence Errol Flynn into a box!”)—but Fairbanks is a joy to behold as he leaps and runs and whirls about.  Incidentally, Fairbanks did all his stunts; the only film for which a double was used for Fairbanks’s stunt was The Gaucho.

So, which film is better? Much as I liked Fairbanks, I’d still say the 1940 film. The adventure and romance come together perfectly there, the scripting is good, and it’s an amazingly enjoyable film. Plus, it’s virtually impossible to beat Tyrone Power for sheer gorgeousness. Fairbanks really doesn’t stand a chance in that department.

The Mark of Zorro (1920) is in the public domain, so you can watch it legally online. Click here for a Youtube link.