The other day, I was thinking aloud, wondering what to do for my next blog post, and my husband said, “Review a comedy.”

So here it is. A review of a film that’s intentionally funny, and which, furthermore, stars one of my favourite Hollywood actors: the incomparable Cary Grant, a leading man who had a fantastic flair for comedy. In this one, he teams up with the equally superb Katharine Hepburn in a crazy story involving a millionaire aunt, a big game hunter, a tame leopard, and a Brontosaurus bone, among other odds and ends. 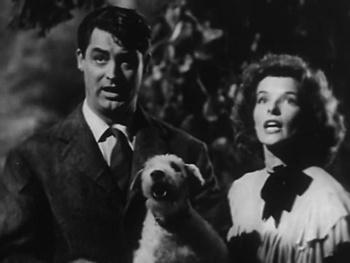 Bringing up Baby begins (as did the very different Lizzie, coincidentally) in a museum. Staid, dignified and bespectacled palaeontologist David Huxley (Cary Grant) is sitting atop some scaffolding piecing together the last few bones of a Brontosaurus that is the pride and joy of this museum that he owns and runs. His fiancée Alice (Virginia Walker) is standing below, every bit as stuffy as David himself, and is running through the list of tasks David has to accomplish within this day and the next. 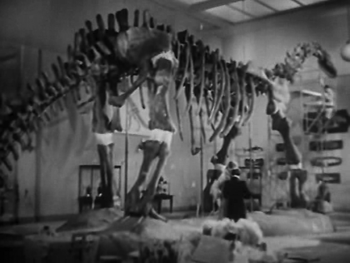 These include:
(a) telling David that the last remaining bone of the Brontosaurus has been found, and will be delivered the next day
(b) meeting a certain Mr Peabody for a game of golf. Mr Peabody is rumoured to be wishing to donate a million dollars, and Alice and David are hopeful that he can be prevailed upon to donate it to the museum
(c)  getting married

Yes, David and Alice are getting married the following day. David is looking forward to their upcoming wedding and the honeymoon, but Alice throws a spanner in the works. David cannot afford to leave his work and go off on a honeymoon. He must work. Work is important. “Our marriage must not entail any domestic entanglements of any kind,” she says.

Cowed by his bossy bride-to-be, David goes back to work—and goes that afternoon to keep his appointment with Mr Peabody (George Irving) at the golf course. Here, he receives a setback: Mr Peabody informs David that he is not the one with a million to donate; Mr Peabody is merely the attorney and adviser for a client named Mrs Random (May Robson), a very wealthy lady who’s been thinking of giving that sum for a worthy cause. Mr Peabody agrees to discuss the matter with David later in the day, but not now—while he’s playing golf, he’ll only talk golf. 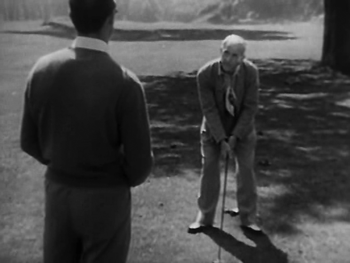 So David goes back to his golf—only to discover that his golf ball has been appropriated by a definitely batty stranger named Susan (Katharine Hepburn). Susan found his ball, figured it was her own, and now (despite all of David’s protests) is using it. 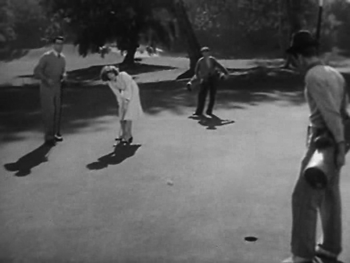 As if this wasn’t enough, shortly after, David finds that Susan has made for the parking lot and mistaken his car for her own. What’s more, she’s a terrible driver, and has knocked his car about quite a bit in trying to get it out of the parking lot. This particular scene ends with poor David, balanced precariously on the running-board, pleading with Susan to stop, while she drives merrily off.

That, to David’s misfortune, isn’t the last he sees of Susan. That very same evening, David is supposed to meet Mr Peabody to discuss the chance of Mrs Random’s donation. It’s going to be dinner at a smart restaurant, and who should David see first when he enters? Susan, sitting at the bar counter and perfecting the art of tossing olives into her mouth (a trick she’s learnt from the bartender). She accidentally tosses an olive just as David goes past. He slips on it, falls, and sits down on his top hat.

David scurries off, and Susan scurries along in his wake, stopping briefly en route to snatch up some olives from the table of a psychologist named Dr Fritz Lehman (Fritz Feld). Dr Lehman is a stranger, but that doesn’t stop Susan from confiding in him that David seems to be following her around. After an astonished Dr Lehman tells her that it possibly implies that David is in love with her, Susan picks up her purse and goes off after David. 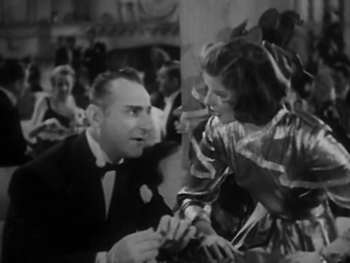 …whom she confronts, asks him if he’s in love with her, accuses him of following her around, and finally leaves her purse with him while she rushes off on some incomprehensible errand. By this time, poor David, holding her purse, is all at sea.

He’s still standing there when Dr and Mrs Lehman come along, Mrs Lehman accusing David of holding her purse. Susan arrives, clutching her purse (which looks exactly like Mrs Lehman’s), which she had left behind at the bar counter. Susan’s explanations are so convoluted and delivered in such a rapid-fire style that the Lehmans end up firmly convinced that she’s a thief and had stolen Mrs Lehman’s purse.

David, thoroughly embarrassed and now running late for his appointment with Mr Peabody, tries to get away—and Susan, trying to make him stop, grabs his coattails. And rips his coat up.
In the craziness which ensues, Susan ends up also ripping up the back of her dress, waist down. And not realising it. David, gentleman that he is, tries to shield her, and manages to eventually get her back to her home so that she can change. 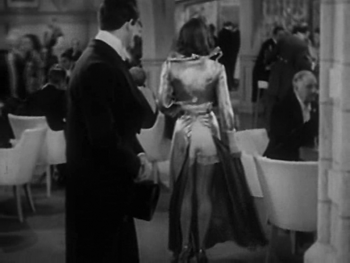 Back at her home, now decently attired, Susan springs a surprise: she knows Mr Peabody. Well enough to put in a word on behalf of David. And what better time to do that than now? She drags a protesting David along to Mr Peabody’s house, only to realise that Mr Peabody (having waited a long time for David at the restaurant) has gone to bed. Susan’s solution is simple: wake up Mr Peabody by flinging pebbles at his window. 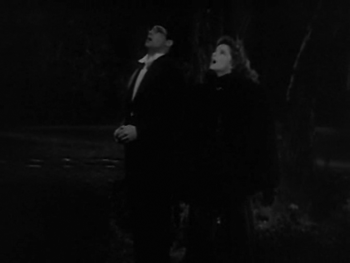 The first lot doesn’t seem to have any effect, so Susan gathers up another lot and lets fly—just as Mr Peabody opens the window and sees David below. A hefty stone flung by Susan at that very moment hits Mr Peabody and knocks him out cold. David is now certain that when Mr Peabody comes to, he’ll think David was the one who threw a stone at him, and that’ll be the end of that million dollars David’s museum might have had.

Susan is obviously lethal and to be avoided at all costs.
David, sensible and level-headed, decides that he won’t have anything more to do with this completely loony woman. The next morning, therefore—just as he’s getting ready to be married—he’s not thinking at all of Susan.
Instead, he’s very happy, because he’s just received the Brontosaurus bone he’d been so looking forward to.

And just as he’s taken it out of its box and begun admiring it, Susan phones, with the news that her brother Mark (who’s a hunter, right now in Brazil) has sent her a leopard. Since David is a zoologist—the only one she knows—surely he’ll know what to do with the leopard?

David thinks this is all a bag of lies. Just then, though, Susan—hurrying after the leopard—trips over the phone wire, lands with a whump on the carpet, and cries out. David, at the other end of the phone line, thinks the leopard’s got her. And Susan (who, and David doesn’t know this, has fallen in love with him) realises that this is the way to get David to come over. Much drama follows, and sure enough—David arrives, and is very huffy that Susan seems to be all right.

But yes, there is definitely that leopard there. According to Mark’s letter, the leopard’s name is Baby. He’s “gentle as a kitten, likes dogs…he also likes music, particularly that song, ‘I can’t give you anything but love’”.
Very nice, David agrees (especially when Susan demonstrates Baby’s love for that song), but Baby is Susan’s problem, not his.

…until Susan drops a bombshell: she wants David to help her drive Baby down to the family manor in Connecticut. Baby will be safe and sound and happy there.
David puts his foot down, absolutely refusing to be part of any more of Susan’s “hare-brained schemes”, but what chance does the poor man have? 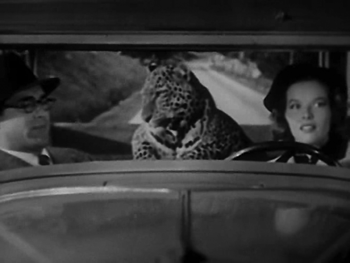 Before he knows it, David has been swept away on the inexorable tide that is Susan: fast-talking, with very few inhibitions (or compunctions), and completely nutters. Thanks to her (not to mention Baby, of course), David will find himself caught up in a crazy whirlwind, with consequences he could never have imagined.

Cary Grant and Katharine Hepburn. Two superb actors, and at their very best here. Grant is excellent as the (mostly) dignified and scholarly David who is catapulted into crazy adventures thanks to Susan. And Hepburn is equally fantastic. Her rapid-fire dialogues, the lunatic rushing about from place to place, and the gay abandon with which she does everything from petting a leopard to falling face-down every few minutes… quite an actress, that.

The Susan character (and this has absolutely no reflection on Katharine Hepburn’s acting). Susan is fun, but she got on my nerves pretty soon. Irritating, pretty much lacking any sort of foresight, and really rather selfish too. She is likeable in some ways, yes—but I couldn’t help but wish she would be a little sane now and then.

But, in a completely over the top comedy, who’s looking for sanity? And when it comes to comedy, Bringing up Baby is one of the best there is from the good ol’ days. It’s a laugh riot from beginning to end, and the pace never flags. And just looking at Cary Grant is enough, as far as I’m concerned.