On my laptop, I have a bunch of wallpapers of some of my favourite actors and actresses. Every now and then, depending upon whose films I’ve been watching—and therefore, who’s my current favourite—the wallpaper changes (right now, in anticipation of The Hobbit: The Desolation of Smaug, it’s Richard Armitage). For a short time, the wallpaper had been one of Eleanor Parker.

For a short time, mind you. Because, while that wallpaper graced my desktop, it was very difficult for me to get much work done. I’d be working on a document, and would have to click to access something on the desktop—and when I saw Eleanor Parker’s gorgeous face there, I’d clean forget what it was I’d gone to the desktop for. I’m not exaggerating. I honestly did get so very distracted, it became hard to accomplish anything. 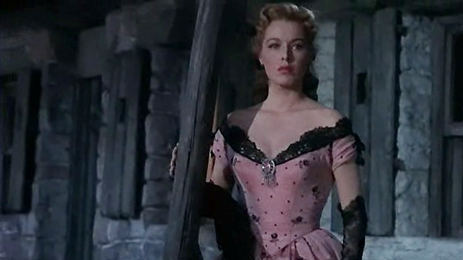 Eleanor Parker, though she didn’t become a favourite of mine till a few years back (and, even now, I can’t admit to having seen very many of her films), was someone I could always identify. In fact, hers is a face even people not terribly clued into the Hollywood of the 50s and 60s would be able to recognise—because she played the very familiar role of the Baroness in The Sound of Music.

The Sound of Music was where I too first saw Eleanor Parker. And, while my sympathies definitely lay with Julie Andrews’s Maria, I couldn’t help but be blown away by how utterly beautiful her rival was. When I grew up a bit and was able to see beyond the romance and the removal of the unwanted third angle in the triangle, I saw, too, the graciousness with which the Baroness had admitted defeat.

That graciousness and dignity was something that shone through in a number of characters that Eleanor Parker played. As Hannah Hunnicutt in Home from the Hill, for example, she was the bitter yet eventually dignified wife of a notorious philanderer (played by another house favourite, Robert Mitchum).

In Scaramouche, while her character did have a passionate relationship with the hero, he ended up falling in love with another woman (played by Janet Leigh). Again, Ms Parker’s character—more vibrant, vivacious and overall spunky than the relatively milquetoast of a leading lady—was the one to bow gracefully and give up her love. 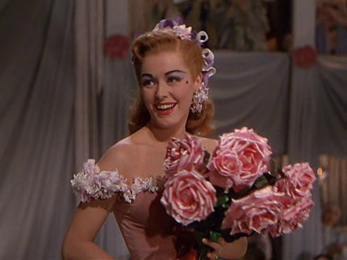 Of course, with a face (and presence) like that, it was hardly to be expected that Ms Parker would always end up with ‘always a bridesmaid, never a bride’ roles. In The Naked Jungle—an unashamed Mills and Boon romance, if one ever saw one—she played the exquisitely beautiful Joanna Leiningen, a mail order bride whose new husband, dazzled by her perfection, wonders what could possibly be wrong with her—there has to be something, she cannot be flawless. 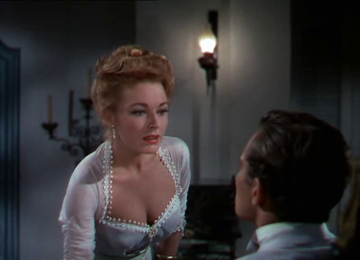 I could go on about films that showcase Eleanor Parker’s loveliness, but let’s move to another aspect of this wonderful actress: her acting. Eleanor Parker was called ‘The Woman of a Thousand Faces’, and with good reason. She wasn’t just a beautiful face, but a very fine actress as well.

Her ‘conventional heroine’ roles (read ‘look pretty as a picture and wait for the hero to come to your rescue’) in films like Valley of the Kings, The Naked Jungle, or Escape from Fort Bravo were pleasant enough, but it was with slightly more offbeat roles that Ms Parker shone. In the whacky Many Rivers to Cross, for example, where she played a headstrong and completely nutty frontier girl who bullies a man into marrying her, irritates the life out of him (and, in the process, makes him fall in love with her!), and eventually ends up saving his life—quite literally. A good comedienne, this lady.

Or, the role I’d mentioned above, of Hannah Hunnicutt in Home From The Hill, cheated on by a womanising husband, embittered and depressed. And seeing the same old story playing out, all over again, with a son who has got a girl pregnant and then deserted her… a masterful performance, even if it didn’t win Ms Parker too much recognition.

And, the acting that did win her accolades. Thrice nominated for an Academy Award (for Caged, 1950; Detective Story, 1951; and Interrupted Melody, 1955), Eleanor Parker won the award for Caged, a role that also got her the International Award at the Venice Film Festival. As Marie Allen, the young widow who is imprisoned and becomes hard, cynical, the exact opposite of the naïve innocent she had been—Ms Parker is breathtaking. Still beautiful, but you tend to overlook that beauty when you watch that performance. She is mesmerising. 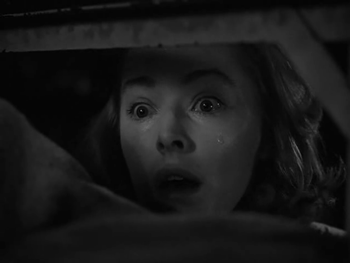 That’s what acting is all about, isn’t it? When an actor can delve so deep into a character that you forget this is Eleanor Parker, and you see only Marie Allen. Or Mary Stuart Cherne. Or Lizzie. Or the other two personalities that live alongside Lizzie in the same body and glide smoothly, in and out, of Lizzie’s persona… 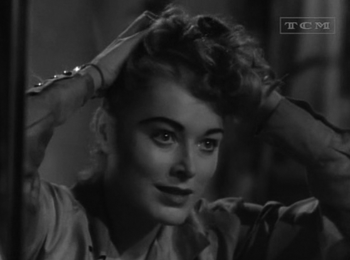 Rest in peace, Ms Parker. I will miss you. And I will always love your films.