Since I am a writer, I’m always on the lookout for good books to read—there’s so much to learn from other writers. And, when the book in question happens to be about cinema, the film fanatic in me rejoices.

A few months back, Sidharth Bhatia, whose excellent Cinema Modern: The Navketan Story had impressed me a lot, told me that another of his books on cinema was due to be released. Amar Akbar Anthony: Masala, Madness and Manmohan Desai (ISBN: 978-81-7223-935-0, Harper Collins, Rs 250, 148 pages) doesn’t fit into the timeline of my blog on classic cinema, since I restrict that blog to cinema from before the 70s. But Amar Akbar Anthony happens to be one of those films that I like a lot, and which I’ve seen often enough to know well. This, I decided, was one book I definitely wanted to read.

Amar Akbar Anthony, for those who haven’t seen it (or have forgotten it—though, personally, I would think that a difficult thing to do) centres around the time-honoured and very popular theme among Indian film makers, of lost-and-found siblings and parents. Pran and Nirupa Roy play the parents of three little boys, the youngest a toddler, who suddenly find their lives turned topsy-turvy when Pran’s character emerges from jail (having given himself up for a hit-and-run, courtesy his slimy boss, played by Jeevan). In the chaos that follows, Pran’s character is involved in an accident and presumed dead, though he’s actually alive and has made off with a stash of smuggled gold; Nirupa Roy’s ‘beleaguered mother’ character (and, oh, how good she was at this particular type!) ends up blind and alone.

And their three children are separated, both from their parents and from each other. One is brought up by a cop, one is brought up by a Muslim tailor, and one is raised by a Christian priest. 22 years later (and this should come as no surprise to anyone who knows anything about Hindi cinema and its love for this particular trope), the paths of all five people involved—parents and long-lost offspring—cross. Again, and again, and again. Until they ‘discover’ each other.

A complex story, and one that Bhatia explains in a rather detailed scene-by-scene synopsis in his book, after devoting a few pages to introducing the film. The synopsis, in fact, is so detailed that people who haven’t seen the film and don’t like spoilers should probably just set the book aside and watch Amar Akbar Anthony before proceeding any further.

The bulk of this pocket-sized book, however, deals not with the story of Amar Akbar Anthony, but with different aspects of the film, its making, its story and plot elements, its message, and those who actually contributed to it. Five chapters—Making the Film; Spicing it Up: The Masala Film; The Manmohan Desai School of Secularism; Cosmopolitan Capers: The Mumbai Film; and The Last Word in Entertainment—follow the synopsis.

Manmohan Desai, the son of a film maker named Kikubhai Desai (about whose film company Sidharth Bhatia recounts an interesting anecdote), had begun his career as a director with the Raj Kapoor-starter, Chhalia. By the time 1976 came around, he had directed over a dozen films. A newspaper article about a man who left his three sons in a park and went off to commit suicide caught Desai’s eye one day, and led him to discuss a possible storyline with script writer Prayag Raaj. The result was Amar Akbar Anthony, Desai’s first film as not just director, but also producer.

In his telling of how the film was made, Bhatia quotes excerpts from interviews with various members of the crew and cast of Amar Akbar Anthony: its dialogue writer, Kader Khan; stars Amitabh Bachchan, Rishi Kapoor, and Shabana Azmi; cinematographer Peter Pereira; special effects expert Ramesh Meer; and Desai’s son, Ketan Desai. Combined with comments and insights from Bhatia himself, these narratives form an interesting, sometimes amusing, window to not just the film, but its maker too, a man exceptionally energetic, sometimes autocratic (his stock reply when a star asked questions was, according to Mr Bachchan, “This is not a Satyajit Ray film. You do because I tell you”), and something of a mad genius too.

All the interesting anecdotes and behind-the-scenes glimpses aside, Bhatia spends ample space focussing on what makes Amar Akbar Anthony stand out from the crowd of other lost-and-found films that were released in the 70s. He begins by discussing the masala element that makes this such a total paisa–vasool film. The ‘masala maestro, the maharajah of madness‘ (as Bhatia describes Desai) seems to have covered all the bases when it came to giving the audience their money’s worth: an all-star cast, good music, romance, comedy, pathos, revenge, an interesting setting, and some utterly memorable scenes (a drunk Anthony ‘attending to’ his reflection, or the iconic My name is Anthony Gonsalves).

It is while discussing the setting—the very cosmopolitan Mumbai—that Bhatia’s affection, not just for Amar Akbar Anthony, but for Mumbai itself—shines through, an affection that appears to have been shared by Manmohan Desai. He shows, with pertinent examples from the story, its scenes and its characters’ dialogues, how they represent the Bombay they live in. This analytical tone is also present in the chapter on the secularism inherent in Amar Akbar Anthony, where Bhatia talks not just about different religions (as well as religious stereotypes) prevalent in Hindi cinema, but also about how these are portrayed in Desai’s film, their believability, and the relatively subtle yet unmistakable message—of followers of all religions being (literally, in this case) brothers.

What I really liked about Amar Akbar Anthony: Masala, Madness and Manmohan Desai was the sheer readability of this book. It combines anecdotes about the film and its making (something a trivia hound like me always laps up) with insightful analyses of the film, its storyline and characters. Thankfully, Bhatia, despite his obvious love for Amar Akbar Anthony, does not hesitate to point out the flaws of the film (among them that over-the-top miracle wrought by Shirdiwaale Sai baba).

To add to the visual appeal, there are also, midway through the book, a bunch of eight glossy pages crowded with reproductions of posters, lobby cards, and stills from Amar Akbar Anthony.

All of it is written in a friendly, engaging style with more than the occasional glimpse of Bhatia’s dry wit. (For example, about Nirupa Roy’s character, he writes: “Nirupa Roy in Amar Akbar Anthony remains a sketchy character, put there only to prop up the men. She has not one worthy scene to herself and is a Calamity Jane, getting into scrapes and accidents all the time.” As someone who’s just rewatched the film for the nth time, seeing Nirupa Roy get clonked on the head by a random falling branch, get blinded, lose her children and husband, get hit, get kidnapped… yes, I can’t help but laugh over that).

On the flip side, there’s a tendency to occasionally repeat things. For example, the fact that Akbar’s character, despite being a Muslim, is the one shown singing Shirdiwaale Sai baba; or the patois used for the dialogues of both Akbar as well as Anthony; or Anthony’s signature song, interspersed with gibberish—all of these, and a couple of other elements of the film, have been mentioned more than once. Since it’s a short book and easily read in a couple of hours, this can provoke a mildly “But you said this before!” response. 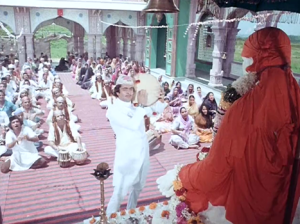 But (as one may say about the film itself), it’s entertaining and thoroughly likeable, even with whatever minor flaws it might have. This isn’t a book to buy if you’re looking for a thesis on Amar Akbar Anthony or Manmohan Desai’s cinema. It is, however, an enjoyable and engaging (plus quick) read for anybody who likes the film. If you do, read this—it’s a worthy companion to Amar Akbar Anthony.