A good way to begin a new year? Launch a series of articles on some of my favourite medieval mosques in Delhi!

As is probably obvious from my article on mosque architecture, I find old mosques fascinating (well, old any building, actually, as long as it’s beautiful and/or historical: everything from the forts of Rajasthan to the temples of Khajuraho –and pretty much anything along those lines—is grist to my mill). In Delhi, of course, thanks to the city’s long history of domination by Muslim rulers (the Slave Sultans, followed by various other dynasties, including the Mughals) and then by the British, some of the most prominent historical monuments are examples of colonial architecture, and what is commonly referred to as ‘Indo-Islamic’ architecture.

One of the finest examples of a mosque in Delhi is the Qila-e-Kohna, in Purana Qila. The Purana Qila, though it was built in the 1530s, is on a very historic site: excavations here have revealed settlements dating back to the 3rd and 4th centuries BC, when the city spreading over this area was known as Indraprastha.

Purana Qila itself was built by the second Mughal emperor Humayun, largely between 1530 and 1538 CE. Humayun had an extremely chequered career as emperor, and had barely even settled in on the throne before he was ousted by Sher Shah Sur (or Suri, as he’s often referred to). When Sher Shah became the Sultan of Delhi, he made several additions to Purana Qila—one of them being the Qila-e-Kohna (literally, ‘the old fort’) mosque. This mosque was built in 1542, and is surprisingly well-preserved (possibly a result of the fact that relatively few people visit Purana Qila?) 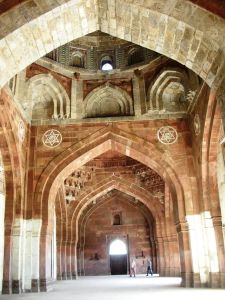 The approach to Qila-e-Kohna is from the back: a ramp leads up to a corner turret-like tower, with jharokhas (carved oriel windows) and bands of carved marble decorating the back wall of the mosque. I remember the first time I visited: “Well, that’s nice,” I thought—and then, I turned the corner and went around to the front of the mosque. And was dumbstruck, because this mosque has such a neat, striking façade. Not as magnificent or majestic as the (much later) Jama Masjid, but intricate and beautiful nevertheless.

The sawaal-jawaab (the sets of arches on either side of the main arch) consists of two arches each: the outer ones of a pale grey local stone known as Delhi quartzite (which, because it’s very hard, is also notoriously difficult to carve), and the inner ones of red sandstone. Little jharokhas, bands of carving, carved medallions, and inlays of white marble decorate these arches.

The central arch—the iwaan—is the main arch, and is proportionately more ornate: its main material is white marble, embellished with carving and inlay work in black marble and red sandstone. 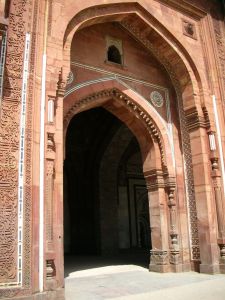 Among the most striking features of the decoration is the carving of Quranic inscriptions, in vertical bands along the columns of the arches and above.

A Quranic inscription at the Qila-e-Kohna.

Inside, the mihrab—the closed arch that denotes West, the direction of prayer—is made of carved white and black marble and red sandstone. If you look closely at the pilasters (the narrow columns that form the pillars of the arch), you’ll see the influence of indigenous architectural elements: the lower half of each pilaster is a representation of the kalash, the little brass pot that was pretty much ubiquitous in Hindu temple architecture.

Inside, the ceiling of the Qila-e-Kohna has more carving. In addition, it also has decorative tile work: if you look up at the domed ceiling, you’ll see small arches decorated with glazed tiles coloured bright blue, green, yellow and white.

Looking up at the ceiling, and the tilework.

Incidentally, the hauz—the water tank—in front of the Qila-e-Kohna wasn’t dug at the time when the mosque was constructed: it dates back to the early 1900s.

9 thoughts on “Qila-e-Kohna: The Mosque in the Old Fort”