Satyajit Ray is a name that appears inevitably on any list of great Indian film directors. And often enough (or at least, it should, as far as I’m concerned) on lists of great film directors, regardless of nation or language. For me, half the joy of watching a Satyajit Ray film is not in in the breathtaking beauty of camera angles or the performances he managed to coax out of actors; it’s in the stories he told through his films. Stories very varied, stories that range all the way from whodunits to romances, to tales of human frailty, injustice, and more. You can never say of Satyajit Ray’s films that if you’ve seen one, you’ve seen them all.

Edited and translated by Bhaskar Chattopadhyay, 14 Stories That Inspired Satyajit Ray (Harper Collins; ISBN: 978-93-5136-193-0; 266 pages excluding appendices; ₹350) consists of twelve stories originally written in Bengali, and two stories—both by the brilliant Munshi Premchand—originally in Hindi. The stories range from the magical, funny children’s story, Goopy Gyne Bagha Byne (by Upendrakishore Ray Chowdhury) to Narendranath Mitra’s poignant and so very real Abotaranika (The Prologue, adapted by Satyajit Ray as Mahanagar), about a middle class family’s endless tussles between traditional ‘values’ and dire necessity, exemplified in the daughter-in-law’s going out to work as a salesgirl.

There are three stories by Rabindranath Tagore, all three of which Ray brought together in his film Teen Kanya: Monihara, Postmaster, and Samapti (The Conclusion) stories that focus on females, ranging from an orphaned servant who develops a deep affection for the master who teaches her to read and write; to a woman so attached to her jewels that they become more precious to her than anything else—to a tomboy who finds herself married, much against her wishes.

There are historical stories here (Premchand’s classic Shatranj ke Khiladi is set in a turbulent Awadh, about to switch hands and come under British rule); there are stories that are firmly set in the 20th century (Rajshekhar Basu’s delightful Birinchi Baba, adapted as Mahapurush, pokes fun at god men and their gullible victims, while Pikoor Diary, written by Satyajit Ray himself, is a telling of a wealthy family’s life—adulterous mother, her overly generous lover, an older brother who has set off on his own—from the point of view of a little boy). There is, in these stories, an immense variety of subjects and themes. There is entertainment, there is pain and poignancy. There are stories that made me smile, stories that gave me a lump in the throat. Stories that made me think, “Yes, this could have happened to anyone.”

My favourites? Abotaranika, Janoiko Kapurusher Kahini (by Premendra Mitra; Satyajit Ray made it into the excellent Kapurush), Jalsaghar, Sadgati, and Shatranj ke Khiladi. Not to say that the others weren’t good; they were. In fact, they were beyond good—I would not call any of the stories in this collection bad.

14 Stories That Inspired Satyajit Ray is worth a read if you like Satyajit Ray’s films. It’s interesting to read the original stories and compare them with the corresponding films Ray made. Sometime back, I’d written a post on cinematic adaptations, and was reminded of that while I was reading this book, because I was struck by the fact that Ray’s films were (and I write, obviously, only of those stories for which I have seen Ray’s adaptations) invariably so good at capturing the story. Either in its entirety—as in the case of shorter films like Mahapurush, Postmaster, or Samapti—or, with subtle changes that retain the spirit of the story while making for a more compelling cinematic experience.

Both Jalsaghar and Kapurush, in this sense, appealed to me more as cinema than they did as literature. Kapurush, as a story, was a good tale of a man’s inability to stand by the woman he loves: he is a coward. Ray invests this character with more nuances, and brings into the story more dimensions. A possibly negligent husband, a possible second chance, a possible—yet impossible?—happy ending. A more textured, more layered telling of a tale than in the original. 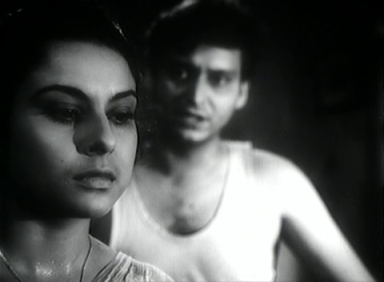 Similarly, there’s Jalsaghar, the story of an old zamindar, the last lonely (and impoverished) survivor of a once-wealthy and well-respected clan, who puts his everything into one last grand display of the wealth and prestige that was once his family’s. In the original story, the protagonist’s character is equal parts arrogance and false pride and foolhardiness. In Ray’s Jalsaghar, he’s all of those—but also a lonely, sad old man left with only his memories for company: a man one cannot help feeling sorry for, too. 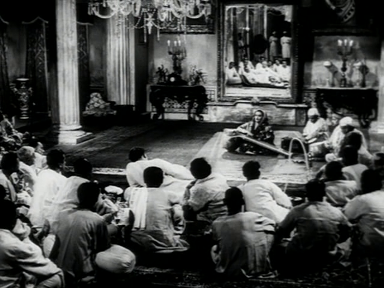 You need not, though, have seen any of Ray’s films to enjoy this anthology. But it just might—like it did for me—inspire you to watch some Ray. The book, by the way, does have its little tributes to Ray’s films: each story is preceded by a reproduction of the poster for the corresponding film, and at the end of the book is a set of appendices about Satyajit Ray’s films: Ray’s article, for instance, about Chhabi Biswas—written on the occasion of Biswas’s death as a tribute; Sharmila Tagore’s memories of working as the central character in Devi; and interviews with people involved in some way or the other with Satyajit Ray’s work.

Available at most bookstores, and online at Amazon and Flipkart, among others.

Plus, if you’re looking at buying Ray’s films, Induna have a fine collection.