I know that sounds a little paradoxical—cynicism and something favourite? But that’s what this post is all about: songs that are cynical, but songs, too, that I like. Like a lot, in some cases.

A few weeks back, blog reader Kamini Dey made a request: a post on philosophical songs. I had been planning that anyway, so decided I should speed up my research on that post. And midway through compiling my shortlist of philosophical songs, I realized that several of the songs I’d put under that head were actually songs of cynicism (which, I suppose, is a kind of philosophy, after all: a philosophy of not expecting anything good from the world). I remembered then that another blog reader, Vinay Hegde, had long ago suggested a song list of cynical songs.

So here it is (sorry, Kamini: I get sidetracked easily, and these songs really include some of my absolute favourites). Ten songs that speak of the singer’s cynicism, his or her belief that the world is not a nice place. At times the bitterness boils forth in a fierce and/or despairing rejection of the entire world; at other times, it is cloaked with satire or a sort of bitter humour. Perhaps even smiles. But the cynicism is there, if you only pay attention to the lyrics. 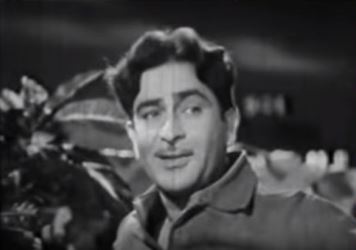 Here, therefore, are the songs, in no particular order, though my absolute favourites are right at the top. As always, they are from pre-70s Hindi films that I’ve seen. Also, since some films have more than one good cynical song, I’ve restricted myself to only one song per film.

1. Dekhi zamaane ke yaari (Kaagaz ke Phool, 1957): I was tempted to begin this list with a song that seems to feature on every other song list I compile—Yeh duniya agar mil bhi jaaye toh kya hai—but changed my mind. Not much, though, because this song, to me, always seems to echo that song. Both feature Guru Dutt and Waheeda Rehman in a depressing and bitter look at the materialistic attitude of a world that worships fame and wealth and grinds the poor, the incapable, and the low into the ground.

Kaagaz ke Phool is about a wildly successful film maker who falls out of public favour and public gaze and is reduced to such utter poverty that he ends up an extra in a studio where he once reigned. And, as he’s kicked about and derided, he realizes once again how merciless this world can be. ‘Matlab ki duniya hai saari’, he says—‘This world looks only to serve its own ends’.

Mohammad Rafi is superb here, singing to SD Burman’s music—and if I were to pinpoint one Kaifi Azmi song that is my favourite, this would be it. Its despair, its cynicism, is so brilliantly expressed: ‘Naadaan tamanna reti mein ummeed ki kashti kheti hai; Ik haath se deti hai duniya, sau haathon se le leti hai’ (‘This naïve hope plies its oars in vain in the sand; the world gives with one hand and takes away with a hundred’).

2. Yeh duniya agar mil bhi jaaye toh kya hai (Pyaasa, 1957): And where Dekhi zamaane ki yaari is listed, can this song be far behind? Guru Dutt again, and SD Burman, and Mohammad Rafi in an immortal song written by the inimitable Sahir Ludhianvi. Guru Dutt, as the embittered and poverty-stricken poet Vijay, who finds himself suddenly much feted and popular after his supposed death, comes forward to face the world. And not just to face it, but to show it its own face: self-seeking, selfish, brutal, unfeeling. It is a world, he realizes, which—though it wants to place him (figuratively) on a throne, wants to crown him and worship him and lick his boots—is ephemeral: its loyalty is here today, gone tomorrow. It is not a world he wants. ‘Jalaa do ise, phoonk daalo yeh duniya!’ (‘Burn it, send this world up in smoke!’) he cries in anguish. ‘Mere saamne se hataa lo yeh duniya! Tumhaari hai, tumhi sambhaalo yeh duniya!’ (‘Remove this world from before me! It is yours, you take charge of this world!’)

3. Cheen-o-Arab hamaara (Phir Subah Hogi, 1958): Phir Subah Hogi, based on Crime and Punishment, had superb music by the often overlooked Khayyam—and music, too, that got the full support of a Sahir Ludhianvi who was in his element in a film that focused on poverty, on the flaws in justice, on the many ills that plague society. The film had another song that had cynicism woven into it—Aasmaan pe hai khuda aur zameen pe hum—but this one, for me, wins. Because Sahir Ludhianvi parodies a well-loved poem (Iqbal’s famous Saare jahaan se achha Hindostan hamaara) and uses it to poke fun, in a sarcastic way, at all that is wrong in India today. Yes, China is ours and Arabia is ours; Hindostan is ours. We don’t have a home to live in, a roof over our heads; but yes, the entire world is ours.

Brilliant, and the half-joking way in which it’s sung makes this even more effective than it would’ve been otherwise.

4. Kuchh aur zamaana kehta hai (Chhoti-Chhoti Baatein, 1965): For some odd reason, most of the cynical songs seem to have been picturized on men. Why? Are Indian women in cinema traditionally supposed to be so self-sacrificing and so bear-it-all-with-a-smile that they aren’t allowed to voice their bitterness about a cruel world? This, then, is one of the exceptions. Nadira, in shirt and slacks (portrayed as Westernized, and therefore perhaps given some allowance for her views?) talks about the world, and about herself. Their opposing views, her insistence on asserting her individuality, and the fact that the world refuses to accept that non-conformism of hers.

I love Anil Biswas’s music and Meena Kapoor’s singing of this song; it’s the reason I saw this otherwise none-too-memorable film. And I love Shailendra’s lyrics. Especially that line about ‘Go basti hai insaanon ki, insaan magar dhoonde na mila’ (‘This settlement is one of human beings; a human being could not be found in it, no matter how hard one searched’). Cynical, but with a sort of amused resignation to the situation.

5. Kasme vaade pyaar wafaa (Upkaar, 1967): Another man, and one whom it’s hard to beat when it comes to sheer bitterness, anger and a certain air of completely having given up on the world. Pran, in a career-changing role as the crippled, bitter, and yet touchingly humane Malang Chacha, sings an unforgettably hard-hitting song that derides everything people hold so dear: love, fidelity, loyalty, promises. Nobody is anybody else’s, he sings; these relationships that we so depend on are all false. People are inherently selfish, faithless, undependable.

‘Dete hain bhagwaan ko dhokha, insaan ko kya chhodenge’ (‘They trick God himself, will they spare man?’) he asks. Pessimistic, one would think, but perhaps his song serves a good purpose too: it warns those around him, shows them the reality of life.

6. Koi sone ke dilwaala (Maya, 1961): From a village, a field, a crippled and poverty-stricken old soldier, to a very different man, in very different surroundings. Dev Anand’s wealthy and much-feted young millionaire realizes, in the midst of a party, that the people who surround him are not his friends. They use him, they feed off him, they are ‘patthar ke sanam’—literally, ‘friends of stone’. He does not blame the world; he does not cast everybody into the pit as Malang Chacha does: all he says is that these people, those he has mistakenly considered his friends all this while, are now revealed to him. And he does not like what he sees. A lovely song, Salil Choudhary and Rafi and Majrooh Sultanpuri together working their magic.

7. Andhe jahaan ke andhe raaste (Patita, 1953): Another Dev Anand film, but not a song picturized on Dev Anand. Comedian Agha played a slightly different role from his usual in Patita, as the cynical tramp who ends up giving shelter to a woman in dire straits—and this song is the meeting of these two people, both in their own way rejected by the world, both desperate and distressed. Usha Kiran plays the woman who’s been raped; Agha is the stranger she runs into, as he goes about singing a song about the cruelty of this world: a song, really, that is as much (more?) a voicing of her plight as of his. I think the picturization of this song and its music (the latter good, though) don’t really fit the lyrics, which are much more depressive and despairing than the picturization seems to let on. 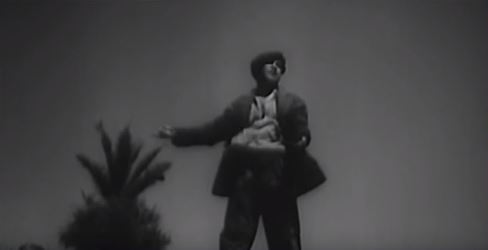 8. Yeh duniya shaitaanon ki basti hai (Yahudi, 1958): This world is a township of devils; life here is cheap, and while the Earth may rotate and one day give way to the next, things will never change for the poor and the downtrodden. They, says the old man as the Romans flog crowds of cowering Jews and drive them along to their deaths, will always be persecuted. He does not offer hope, he does not tell them that there may be a better world awaiting them in the afterlife, or that their misery will end. No; he merely tells them what they already know. I wonder if any of those listening are bothered, but it’s a good enough example of cynicism.

9. Dekh tere sansaar ki haalat kya ho gayi (Naastik, 1954): When Vinay Hegde first suggested I do a post on songs of cynicism, he added, to clarify what he meant, that the singer might have started off as positive, but his (or her) experiences have soured his/her outlook on life. I did not take that as a criterion for this list—there are several characters singing cynical songs here about whom we do not know enough to decide whether they started off upbeat or not; the lyrics, too, do not reveal that.

This song, both written and sung by the inimitable (in his own special way) Kavi Pradeep, is a bit of an exception: it suggests a world that was once sane, but has now gone completely off the rails. Against a backdrop of people-heavy trains chugging slowly along, of tired and listless people, battered and ravaged by the Partition, trying to somehow stay alive, this background song (which is really a voicing of the protagonist’s own feelings) condemns the insanity that has taken hold of the world.

10. Ainwein duniya dewe duhaayi (Jaagte Raho, 1956): It might seem odd to some that one post of mine should contain two songs from Raj Kapoor films, considering I’ve never hidden the fact that I’m not an RK fan. One thing I do admit, though: a lot of RK’s films had excellent music, and because so many of them had themes of socialism, of social ills, corruption, and the constant tussle between poor/simple/ ‘innocent’ on the one hand and rich/wily/corrupted on the other—they invariably ended up with at least one song that derided the inequalities in society.

This song, though given a peppy, even light-hearted touch with its bhangra and the ready smiles of the sardars who sing it, is bitingly critical of the world. A world which calls the ill-gotten gains of the wealthy ‘good fortune’; which overlooks the irreligious money-grubbing of the ‘saintly’; a world which has warped ideas of true and false… who wants to agree with a world like that? Not these men.

70 thoughts on “Ten of my favourite cynical songs”