There was a point, when I was watching Meghe Dhaka Tara, that I was reminded of another much-acclaimed Indian classic, Pyaasa. A man, an artiste (a singer, not a poet, as in Pyaasa) wanders along on a grassy patch of land, singing. Far beyond is the railway track; around him are shady trees, a path, solitude. Here is a man practising his art, being one with nature, without a care for the world around him. 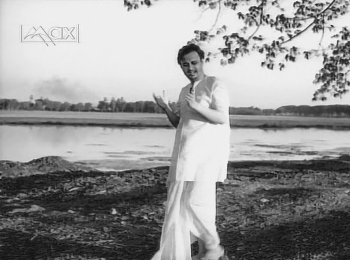 It reminded me of Vijay (Guru Dutt) in Pyaasa, reciting a poem as he lies on the grass. Far away from the world, even if not literally, because the world intrudes—brutally. Also, I was reminded of Vijay, because (like Vijay), the singer in Meghe Dhaka Tara, Shankar (Anil Chatterjee) does not have a job: he depends on his family for his upkeep. A family which derides him for being jobless, for sponging off them.

There the resemblance ends, because Shankar is not the protagonist in Meghe Dhaka Tara; it is his sister Neeta ‘Khuki’ (Supriya Choudhury) who is the focus of the story, and she is nothing like the protagonist of Pyaasa. She does not sit around abusing the world and criticising it for giving her the short end of the stick. She does not mourn and indulge in one round of self-pity after another. She is nothing if not hardworking; hardworking, self-sacrificing, to the point of being a pushover. She has little time to weep over the past. 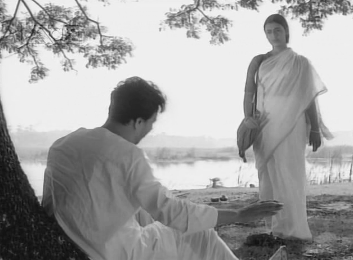 Set in a small, shabby refugee camp (though it’s never explicitly stated as being such) on the outskirts of Calcutta, Meghe Dhaka Tara revolves around Neeta and her family. A family of six, all of them adults, and all obviously well-educated, genteel—and equally obviously, poor. Not poor as in having to scavenge, but poor as in having to face the taunts and the ungentle reminders of the shopkeeper from whom they take credit.

Their father (Bijon Bhattacharya) is a teacher, a mild-mannered man who quotes from the classical English poets and gives the impression of wanting to run away from the haranguing and turmoil of daily life. Much of this angst is due to his wife (Geeta De), a bitter and tense woman who dotes on her two youngest children and abuses the two elder ones.

The eldest of the offspring is Shankar, who has been learning  Hindustani classical music and spends all his time in riyaaz. Beside the train track (with the sound of a passing train drowning out his voice every now and then), wandering through the grass, at home. Shankar doesn’t have a job and has no desire to even try for one. He is very certain of his talent, and knows that someday he will make it big; but his joblessness, in the meantime, makes him an object of contempt for most people. The shopkeeper, for instance, keeps mocking Shankar for being the eldest son but living off his sister’s earnings. Shankar’s mother, too, leaves no opportunity to tell him off, and to curse him. What good is a son like this? 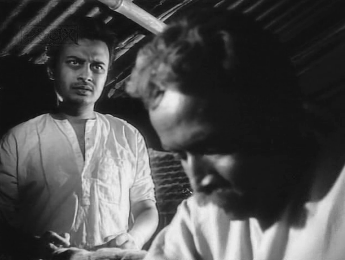 Not that their mother has a kind word even for the daughter who is responsible for keeping the family fed and clothed. Neeta works as a tutor, and her tuition earnings are what primarily finance the family; their father’s earnings are too little, and too spent in other non-essential expenses: a subscription here, a gift to a passing minstrel there. Neeta’s earnings are greedily and quickly gobbled up: her two frivolous younger siblings, both of them in college, have no compunctions about taking away her last few annas to buy themselves things. Montoo (Dwiju Bhawal), for instance, is more interested in sports than in studies, and wants a new pair of good football boots, with spikes. 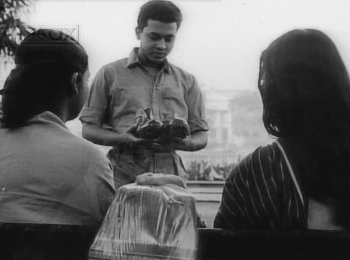 And his sister Geeta ‘Geetu’ (Geeta Ghatak) is as equally uninterested in studies as Montoo; she would rather pretty herself up and read magazines all day long.

Their mother is indulgent towards Montoo and Geeta; their wants must be met, their desires fulfilled. Instead, she accuses Neeta of spending all her money on herself, not having a care for them. 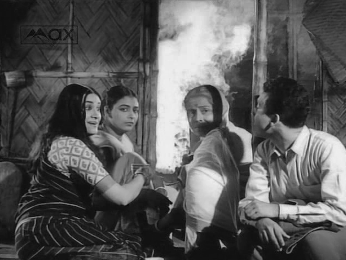 Finally, there is Sanat (Niranjan Ray). Sanat was once a student of Neeta’s father’s, and he’s on very friendly terms with the entire family. Especially Neeta, with whom he’s in love (he is the one, in fact, who gives her the epithet of ‘megha dhaka tara’—‘the cloud-capped star’—in a love letter at the start of the story; he uses it to refer to her sweetness and kindness, which is shadowed by the poverty and selfishness of those around her). That Sanat and Neeta are in love is an open secret: everybody knows it, including her parents and his neighbours.

But there are obstacles to Neeta and Sanat getting married, even though they dream about it. He does not have a job; he’s a scholar—a very accomplished and intelligent one doing research on some complicated theory in pure physics—and she knows that if she were to get married and leave her home, her family will be left with no means to support themselves. They cannot possibly survive on just her father’s income.

And that, when the old gentleman slips and falls on the railway tracks, too comes to an end. With his accident and his getting bedridden, Neeta’s last hopes of being able to get away and finally find some happiness of her own too evaporate.

The completeness of it. When I was younger, I would probably not have been so appreciative of a film that is so deeply tragic, and in which the protagonist, for all her goodness and ever-cheerful self-sacrifice, ends up with next to nothing. Now, I like to think I have matured a bit, so despite the sadness of it, I could not help but be awed by Meghe Dhaka Tara. By Ritwik Ghatak’s direction, by the music, the acting, the story. There is nothing here I didn’t like, but some elements, in particular, need special mention when it comes to what I especially liked.

Firstly, the characterization. Barring the selfish and greedy Geeta, nobody in the film is completely black or white (and Geeta too isn’t completely heartless). Neeta’s mother, for instance, for all the barbs she flings at Neeta, does, now and then, in a moment of remorse, curse her own tongue for being so brutal. Life has made me this way, she mourns. 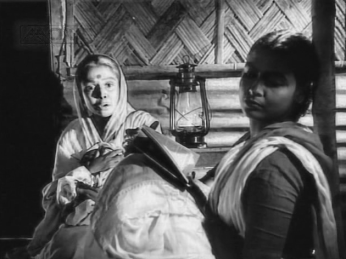 Her husband, Neeta’s father, a kind man who seems genuinely appreciative of the effort Neeta makes to keep the house running, is yet not perfect. He has little concept of controlling expenses, and is a bit of a milquetoast: he sees his wife treating Neeta harshly and unfairly, but does little to intervene. And by the time he does intervene, it’s too late.

The most interesting secondary character, for me, is Shankar. This is a man who seems, at first glance, to be merely utterly selfish and shameless: the way he begs Neeta for a few annas so that he can get a shave is embarrassing. But this is also the brother whom Neeta admits happily that she loves, and who—it’s equally obvious—loves her, too. He may take money from her, but he also chides her, calling her idiot, for letting the family ride roughshod over her. The interactions between Shankar and Neeta are among the most heart-warming in the film, because this is the one member of her family with whom Neeta seems most at ease: she does not need to maintain a façade of acceptance and quiet calm before him. And their very last scene together in the film is heart-breaking.

Neeta herself is a memorable character—one in whom I could see traces of people I have known. A person who, because of circumstances, has to take on more than her share of a burden, and who, because of her inherent docility and generosity, ends up being ‘exploited’ (the exact term Shankar uses to describe Neeta’s condition). To the outsider, it would seem as if Neeta is spineless, allowing her selfish family to use her without giving her anything in return, not even thanks. But, as she tells Shankar, she does this because she loves them all, and she knows that (even though they may be too shy to say it), they love her too.

Neeta’s love—for her family, for Sanat—eventually ends up with her being too selfless for her own good, leading to her downfall. But in the process, another facet of Neeta is revealed: a woman who realizes that the very people who once depended on her have now become so independent, so sure of themselves, that they have no further need of her—and that they have no compunctions about turning their backs on her. Her good nature will not allow her to cry over their desertion of her, but she is human, after all, and she cannot remain completely impassive. 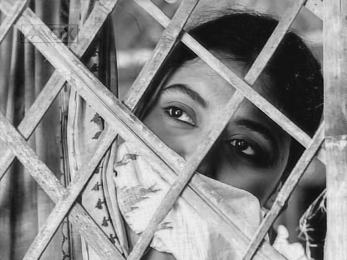 Besides the characterization, I also loved the way everything fits in, the crisp editing and the fine focus of the story. There is nothing here that is superfluous; nothing that could easily have been done without. Even the songs (and which old Indian film would be complete without songs?) become part of the narrative: one is Rabindrasangeet which Shankar teaches Neeta at her request, at a time when she is in deep distress; another is a song sung by a minstrel who comes by. Mostly, though, the songs are those sung by Shankar as he does his riyaaz: sublime pieces of classical music, sung playback by Pandit AT Kanan.

Lastly: the look of it. The frames, the light and shade, the stark reality of sudden, unforgivingly extreme closeups.

If you haven’t seen Meghe Dhaka Tara so far, I strongly urge you to. It’s worth watching.

And yes, before I end this post: happy birthday, Supriya Choudhury! Ms Choudhury, one of the stalwarts of Bengali cinema, was born on January 8th (she shares a birthday with me, though she’s 38 years older than I am).