This film has been on my radar for a long time now—since I discovered that one of my favourite Hindi films, Ittefaq, was based on Signpost to Murder. The other day, I was again reminded of that, and this time decided I had to watch the original.

Signpost to Murder begins in an English village named Milhampton. Here, at a local asylum for the criminally insane, lives Alex Forrester (Stuart Whitman). Alex, who was accused of murdering his wife, has been in the asylum for the past five years. When the film opens, he’s outdoors, shoveling earth in the shadow of the high electric fences that surround the institution. With Forrester is his psychiatrist, Dr Mark Fleming (Edward Mulhare). Fleming has known Forrester these past five years and is due to represent Forrester in an upcoming debate regarding the possibility of bringing up Forrester’s case again.

It’s an idiotic thing, the Lunacy Act, Fleming says. It has this completely insane clause that if a criminally insane person escapes from the asylum and remains at large for 14 days, his case is then liable to be reopened.

It will not come to that, Fleming says. He assures Forrester that he is convinced of Forrester’s innocence. There is probably a good chance of having the case reopened. Forrester seems reassured, and hopeful that he will finally be cleared. He’ll be able to pick a house to live in, in the village of Milhampton, he tells Fleming. Fleming agrees; he knows well enough that Forrester spends a good bit of his time looking longingly down at the village.

Fleming keeps his appointment at the meeting to discuss the possible reopening of Forrester’s case. It comes to nothing; despite all Fleming’s assurances that Forrester is sane, the plea is turned down. Fleming returns to Forrester’s cell late that evening to give him the sad news—and, when Fleming turns his back for a moment, Forrester springs on him, bashes him on the back of the head, and knocks him out cold. He then quickly strips Fleming of coat and hat, dons these himself, and manages—after knocking out another man and then turning off the power to the electric fence—to escape.

Running through the woods surrounding the institution, Forrester runs straight into a tree and gets briefly knocked out. He comes to soon enough and sets off looking for a safe haven. This he finds in a house he’s long admired: a house which was perhaps once a mill, because it stands beside a large mill pond and is partly built around a great big mill wheel. 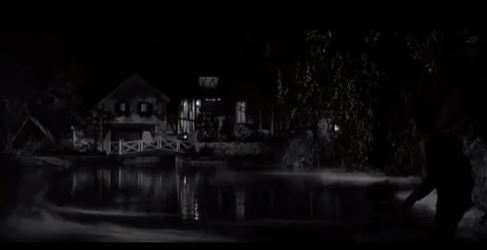 Forrester sneaks stealthily up to the house, just as another person—Police Constable Rogers—arrives as well. Forrester is able to hide and remains unseen as Rogers rings the doorbell. The door is opened by Mrs Thomas (Joanne Woodward). Rogers introduces himself and tells her about the man who’s escaped from the institution. Mrs Thomas says that she’s alone at home; her husband, Evan Thomas, is away on work in Amsterdam and is expected back only later that evening. She hasn’t seen anyone suspicious.

Rogers, however, asks for permission to look around the house, and Mrs Thomas is happy to let him do so. Nothing is found, of course (Forrester, clinging to the outside wall, is well-hidden). Rogers leaves, with a last word of caution to Mrs Thomas.

Mrs Thomas (who’s been clad in a swimsuit; she was trying it out in preparation for an event where she’s going to model it) goes upstairs to change. When she comes down again, Forrester has entered the house. He soon emerges, confronting her as he grabs one of her husband’s guns and changes into her husband’s clothing. Mrs Thomas is initially shaken but settles down soon enough—enough to accept that Forrester only needs shelter for the night, and that he may not be insane.

While Forrester is getting Mrs Thomas on his side, who should turn up but Dr Fleming? As soon as the doorbell rings, Forrester hides himself, but keeps his gun trained on Mrs Thomas, whom he instructs to stay within sight. He, therefore, is able to listen to the entire conversation. Fleming introduces himself to Mrs Thomas and tells her that he is the psychiatrist to the patient who escaped, which is why he’s come.

Mrs Thomas reassures Fleming that all is well and she hasn’t seen anything of Forrester. When he’s gone, Forrester emerges. This interlude has served to assure him that Mrs Thomas isn’t going to give him away so quickly, and the tension lessens a bit. As time passes, they fall into conversation. Slowly, Forrester begins to realize that Mrs Thomas is deeply unhappy in her marriage. She’s lonely, she’s come to know that her husband doesn’t really love her, and, all alone in this house with the mill wheel constantly turning, she thinks her life is like that wheel, too. Round and round and going anywhere…

It’s hardly surprising, then, that Forrester and Mrs Thomas end up in bed together.

Later, while she sleeps on the couch, Forrester keeps watch. Outside (inside?), the mill wheel turns, creaking as each slat comes up, followed by another, and another. And then, before Forrester’s horrified eyes, a man’s naked body shows up, its throat slit, sprawled across one of the slats. Forrester reels back in terror, and falls down the stairs, passing out briefly before Mrs Thomas, jolted out of her sleep by his scream, comes running.

Mrs Thomas tries to question him, tries to get at the truth. Forrester, after all, had mentioned that he was accused of murdering his wife, but he admits that he doesn’t know for sure whether he did or not; he remembers passing out and coming awake to see his wife lying in the bathtub with her throat slit. And now he remembers that, just a few hours earlier, he had banged into that tree and passed out.

Could it be, suggests Mrs Thomas, that Forrester can murder people and later lose all memory of his crime because of a blackout? That could have been what happened in the case of his wife; and it could be what happened here.

But who is the dead man? (If there is a dead man). Is Forrester really insane?

The entirety of it; it’s taut, well-scripted, engrossing, and with almost nothing that’s superfluous. Just about everything, down to Forrester’s knowledge of the house (he’s been watching it for five years now, from his window at the institution) to a passing child pitching a stone at the electric fence to show what would happen if anyone tried to cross it—is relevant to the plot.

The acting, both Whitman’s and Woodward’s, is good, too. But what really stuck with me was the mill wheel. It’s a brilliant touch, that constant movement, the inexorable turning round and round—and even in the final moment.

The somewhat rushed ending. It makes sense (though it seems to hinge on some iffy assumptions). And one major question remains unanswered.

As is usual every time I watch a film of which I’ve either also read the original book version, or of which I’ve watched another adaptation, a comparison between the two. Signpost to Murder was adapted, five years later, by BR Chopra (as producer) and Yash Chopra (as director) into the Hindi film Ittefaq, starring Nanda, Rajesh Khanna, Sujit Kumar and Iftekhar in the main roles. Unusually for a Hindi film, Ittefaq had not a single song, and was only (by Indian standards, very brief) an hour and forty-five minutes long. Also, interestingly enough, it was made in a mere 28 days of shooting.

When it comes to story, the plot of Signpost to Murder is completely incorporated into that of Ittefaq: a man is accused of murdering his wife, declared criminally insane and therefore incarcerated in a lunatic asylum. He escapes, ends up at the home of a woman towards whom he then begins to feel attracted—and discovers, sometime later, that there’s a dead body in her house. Or so he thinks, because it vanishes shortly after, leaving the man wondering if he really is losing his mind.

Except that Ittefaq doesn’t leave it at that. Where Signpost to Murder is happy to not delve into whether Forrester actually murdered his wife, Ittefaq dredges up that mystery too and has its cops investigate it and come to a conclusion regarding that as well. And, while Signpost to Murder comes to a sudden resolution regarding the dead man on the mill wheel—a conclusion that comes about because someone breaks down and blurts it all out—Ittefaq doesn’t dispose of that plot element so easily. Instead of the culprit confessing it all in a sudden moment of guilt, in Ittefaq what happens is different. Here, Dilip Roy (Rajesh Khanna), the ‘lunatic’, proves he’s more observant and more able to put two and two together than the cops, because he figures out what had really happened.

In essence, Signpost to Murder is more a psychological crime film; the focus of it is the working of the mind (and that mill wheel, turning round and round). What really happened is a short, not deeply explored, point. Ittefaq, on the other hand, is an unabashed whodunit. Who killed Dilip Roy’s wife? And who killed the man Dilip Roy briefly glimpsed in the bathroom at the house?

In keeping with that, Ittefaq also sets up its clues with more care (although some of the clues—like the airline ticket, so completely pushed under the bathtub—are a little farfetched). One of the details that I especially appreciated was that the photo of Jagmohan (the husband of Rekha, the woman in whose house Dilip Roy takes shelter) is displayed prominently in the drawing room. Dilip Roy can’t help but notice it, and in his conversations with Rekha, remarks on it as well. His seeing the photo helps him recognize Jagmohan in the corpse he sees so briefly in the bathroom; in Signpost to Murder, on the other hand, Alex Forrester has no idea what Mr Thomas looks like, so his seeing the corpse on the mill wheel and identifying it as Thomas is really just a wild guess—there’s no logical basis for it.

On the whole, two very different films, even if one almost completely includes the other. Personally, I liked Ittefaq more: it’s more rounded, more complete, and it leaves fewer things unresolved. Yes, it does get a little melodramatic at times, but still, a more entertaining film.