BR Chopra is one director for whom I have a lot of respect: he was one of the most versatile film makers of his time, a man whose films could not easily be dumped together into one broad category. Look at the difference between Waqt and Sadhna, for instance: one stylish and glamorous, the first big multi-starrer in Hindi cinema; the other a low-key yet impactful film with an unusual female lead. Or Humraaz, a sleek suspense thriller, and—on the other hand—Dharamputra, a commentary on secularism and bigotry and several related ills which still plague India.

Whether he was conveying a message, highlighting a social evil, or simply making an entertaining film, BR Chopra was in a class by himself. His films invariably had excellent production values; the music could always be counted upon to be topnotch (and the fact that he often commissioned Sahir Ludhianvi as lyricist meant that it wasn’t just the music that was superb, it was also the words of the songs—some of Sahir’s best songs are for BR Chopra’s films).

Which brings me to this film. Ek Hi Raasta was one of BR Chopra’s earlier films, and while it doesn’t have the impact of (say) Gumraah or Dhool ka Phool, it is still an interesting story. 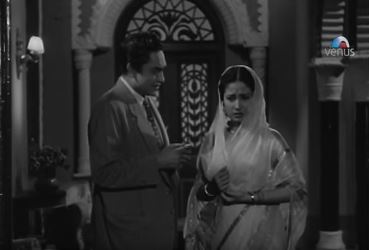 Ek Hi Raasta spends the first half hour introducing us to its main characters and their relationships. There is, for one, Prakash Mehta (Ashok Kumar), who is a government contractor. Prakash is a bachelor and freely admits that that’s because his expectations of a wife are of someone so very perfect that he’s unlikely to ever be able to find a woman like that. Prakash lives alone in a big bungalow with his servant Pyarelal (Radhakrishan) and a dog, Tiger. 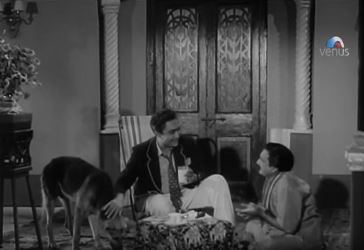 Prakash’s employee and manager is Amar (BR Chopra favourite Sunil Dutt). The relationship between the two men is more of friendship than of employer and employee: they’re informal, they pull each other’s legs, and Prakash is also a frequent visitor to Amar’s house, where he’s on very friendly terms with Amar’s little son Raja (Daisy Irani, billed as Roop Kumar). Amar’s pretty wife Malti (Meena Kumari) is also comfortable in Prakash’s presence: he treats her with an easy respect. It’s almost as if Prakash were another member of the family.

And what a sweet [at times sickeningly so] family this is. Both Amar and Malti are orphans and have been brought up in orphanages, so have nobody but each other and Raja to call their own. The love between the three of them is manifested in the way the two adults indulge the child in his games, playing hide-and-seek with him, letting him pretend to be a bandit and they his victims, taking him on fun outings where they cycle through the countryside. 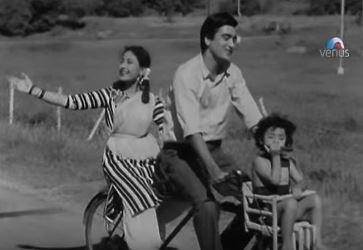 Amar and Prakash do not know, however, that their business is being used as a front for some underhand work by their munshi, Bihari (Jeevan). Bihari, in cahoots with the truck driver, has been cooking the books and stealing sacksful of cement (substituting them with sand) and selling the cement off—plus, of course, pocketing the income.

This has been going on for a while when one day Amar, picnicking beside a swimming pool with Malti and Raja, spots Bihari along with the company’s truck, handing over cement to an illicit buyer. Amar goes and confronts the two of them, and immediately takes action.

The result is that the truck driver ends up behind bars and Bihari is dismissed from his job. Bitter and angry, Bihari takes to selling sweets from a portable khomcha, and this is where the truck driver—after completing his stint in jail—finds himself. 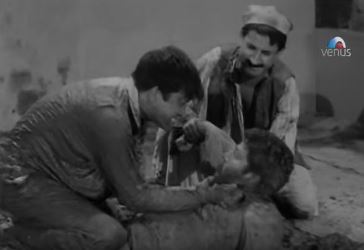 … and this he does, by running down Amar a few days later. [Just like that. Amar is cycling home from the market, bearing gifts and balloons for Raja’s birthday party, and suddenly—wham]. Malti’s world crumbles. In one fell swoop she’s gone from being happy and effervescent and a much-loved wife to a lonely, miserable mother of a child who keeps asking her where his father is.

This is a question which Malti and the household’s maid Shobha (Yashodara Katju) always evade, but Prakash, who continues to visit, tells Raja that his father is in the hospital and will be home soon. Just another three or four days, and see? He’s even sent this toy for Raja to play with. And if Raja is a good boy and goes to school and eats his meals, Pitaji will soon be home. [I lay no claim to knowing anything about handling children, but even I can see how utterly devoid of foresight this approach can be—and what it can lead to. Poor Raja].

Prakash, seeing Malti in such misery, offers a suggestion: she should work. Since she’s a trained dancer, how about holding dance classes? It will keep her occupied, and the income, of course, will be welcome. Malti, though a little nervous, agrees, and soon the dance school has been set up and little girls are coming there to be trained by Malti.

Prakash, too, keeps visiting Malti now and then to check on her. He continues even when his servant warns him that nasty gossip is spreading about Prakash and Malti. Prakash laughs it off; gossip is gossip, no harm will come of it.

But one day, when Prakash goes to pay Malti a visit, he finds Bihari already there. Bihari is trying to get fresh with Malti, and Prakash loses his temper. He hits out at Bihari, and this humiliation makes Bihari even more incensed.

Soon, things are getting unbearable for Malti. Egged on by Bihari, everybody in the neighbourhood begins to taunt her. To her face, people tell her that she should get out, there’s no place in their midst for a harlot who was carrying on with her husband’s boss even when the husband was alive, and now that Amar is dead, she’s left off all shame. Malti is hemmed in on all sides—when Prakash comes to her rescue. He not only fights off a bunch of lathi-wielding goons, he even [in a fit of rage at the malice of these people] presses a thumb to the blood flowing from his scalp and uses it to colour her maang. 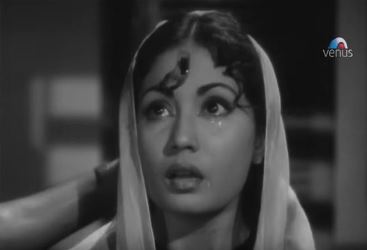 But is this enough? If Malti marries Prakash, are all her troubles at an end? Or is she just exchanging one lot of troubles for another?

The social message in Ek Hi Raasta—that of widow remarriage—is briefly dealt with, and takes second place. It’s not as if anybody opposes Malti’s getting married again; the problem, rather, is that people cannot see a man and a woman together (even in the most innocuous of circumstances) without imagining that there’s something illicit going on [and who, pray, gave anybody the license to interfere in another adult’s life?] Unlike several of BR Chopra’s other films that have a strong social message—like Dhool ka Phool or Dharmputra—Ek Hi Raasta focuses not on a social malaise, but on the relationships between members of a family. How does a small child adjust to a stepparent? What are the implications of remarriage? What effect can a lie—even if said with the very best of intentions—have on relationships?

The simplicity of the story, which can be summed up in just a few sentences. There are no convoluted plots here, no protracted wooing, very little in the way of comic asides: the focus is on the main characters and their lives.

Meena Kumari and Ashok Kumar. I have lost count of the number of films I’ve seen starring this pair [though, as someone pointed out elsewhere, Ashok Kumar—especially when Pradeep Kumar also featured in the film—always ended up being the man who lost out], and this is one in which I’ve especially liked them. Meena Kumari, though weepy through much of the second half, is beautiful, and Ashok Kumar—never my idea of a dreamboat—looks surprisingly handsome at times. Plus, there’s his acting: his chemistry with his co-stars, both Meena Kumari as well as Daisy Irani, in particular, appears so effortless, so genuine. In fact, Ashok Kumar and Daisy Irani’s interactions here reminded me of their absolutely delightful jugalbandi in Bandish (coincidentally, also with Meena Kumari). 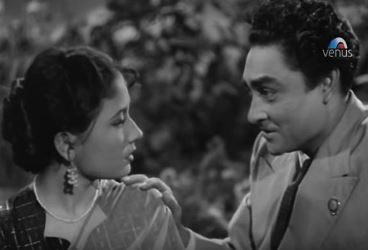 And, last but by no means the least, Hemant’s music. Saanwle-salone aaye din bahaar ke has long been a favourite of mine, but there are some other great songs too: Chali gori pee se milan ko chali, Chamka bankar aman ka tara, Kaisi lagi kaisi lagi—and the precocious but infectious Bade bhaiya laaye hain London se chhori, with a very young Baby Naaz shaking a leg for all she’s worth.

The pretty pointless interludes featuring Pyarelal and his nemesis, the dog Tiger. These are tedious, take up time, and have little relevance to the main story.

And, Raja in the first half of the film. It’s not Daisy Irani’s acting I object to; she fits the character perfectly—it’s the character I don’t like, because Raja is a spoilt, precocious brat whom I couldn’t summon up a liking for, despite Daisy Irani’s cuteness. On the other hand, Raja in the second half of the film I found easier to relate to: a little kid, confused and lost because he’s been told something and now sees everything through that perspective. Pitaji is in hospital; then why isn’t he coming home? And why is Ma allowing Prakash Babu to touch her hair? Why are they living in Prakash Babu’s home? When will they go back home to be with Pitaji? He is a child, so he will do seemingly stupid things an adult wouldn’t, but the psychology of the child comes through very well in this part of the film. Good writing, good understanding of children, and good acting.

I first watched this film as a young teen (good old Doordarshan, as always). I’d forgotten much of it, other than the bare bones of the plot—but a rewatch wasn’t painful. By no means one of BR Chopra’s best, Ek Hi Raasta is still not a bad film.