I have a confession to make: I am not especially fond of Kishore Kumar as an actor. He’s a brilliant singer, and he can be pretty funny in films like Chalti ka Naam Gaadi or Pyaar Kiye Jaa or Padosan—but that, as far as I am concerned, is about it. Asha, Rangoli, Naughty Boy, Half Ticket, Jhumroo, Ek Raaz, Naya Andaaz, Bandi, Manmauji: I have lost count of the number of films I’ve seen because of good songs, or a cast that appeals to me, but have ended up regretting because Kishore Kumar’s antics were so very over the top as to be unfunny.

But then there are films like New Delhi and Naukri, where there isn’t a concerted effort to make Kishore’s a comic character. Films about young men who are like most other young men: trying to go from being boys to men, facing trials and tribulations, trying to laugh through them when they can, caving in occasionally. Not heroes, not comedians, just normal men.

Naukri is about one such man. Ratan Kumar Choudhury (Kishore) lives in a village in Bengal with his younger sister Uma (Noor, more familiar to most people as Mrs Johnny Walker) and their mother (Achla Sachdev). When the film opens, everything seems sweet and cheerful: Uma, with a little basket of flowers in her hand, is posing outside their home, while Ratan holds a camera, trying to get a good photograph of her. It’s only when Ratan topples over accidentally and Uma starts laughing, that we realize something is wrong—because her laugh swiftly turns into a cough, which brings both Ratan and their mother hurrying towards Uma. 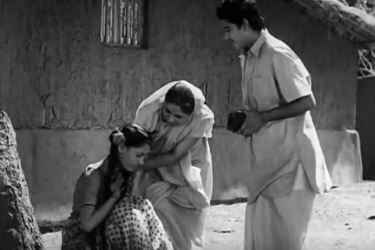 It turns out that Uma suffers from TB. The family, however, are not daunted by this; Ratan has, thanks to careful economizing by his mother, been able to study. He has recently given his BA exams and is waiting for the results. A friend in Calcutta has been asked to let Ratan know once the results are declared. Ratan is quite sure he will have done well. And once he’s a graduate, getting a good job will be a cakewalk. Then they’ll have everything they could want or need: a good house to live in, a sanatorium where Uma will get treated… Oh, everything.

There is much excitement and joy, therefore, when the expected message arrives. The results are out, and Ratan has passed—with a distinction, too [how odd. No first class first?]. As planned, he immediately prepares to go off to Calcutta and begin job-hunting. Unknown to him, his mother goes to the local jeweller and sells off whatever little third-rate gold she still possesses. She gets very little money for it, but whatever she gets, she presses into Ratan’s hand as he is about to climb into the tonga to go to the railway station. Ratan will need it, going as he is so far away.

(It’s interesting here to note that Ratan, though he does not know that his mother has been to the jeweller, has the emotional intelligence and the sensitivity to realize that even this meagre amount has cost his mother something. He accepts it with gratitude, but without a sense of entitlement). 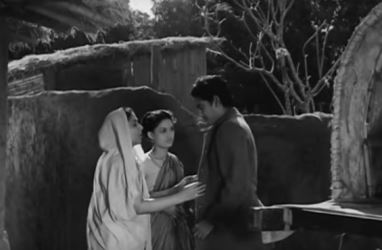 In Calcutta, Ratan makes his way to Ananda Boarding, a boarding house occupied entirely by men. The manager (Moni Chatterjee) is inclined to show Ratan the door—he’s had enough of unemployed young men who can’t pay their rent on time. Ratan, however, is both persuasive as well as confident: he is a BA, after all; and his father’s old friend and colleague has promised to get him a job in the company where he works. Within a couple of days, Ratan will have a job. 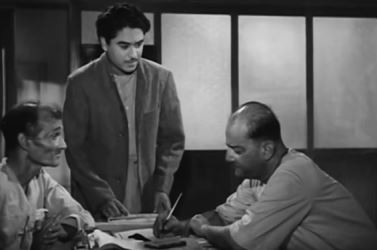 Still, the manager instructs the servant, Hari (Kanhaiyalal, in an endearing role) to show Ratan to the Bekar Block and give him the single room there. The Bekar Block is the block occupied by the bekaar (unemployed) of the boarding house: three men (of whom one is played by a young and handsome Iftekhar) who share a room. They haven’t been able to find jobs for the past year, even though they try hard.

Ratan, because of his prospects, as well as the advance rent he’s been able to pay up, gets a room all to himself. This is divided from the adjoining room by a thin wall that doesn’t quite reach the ceiling, so there’s little privacy, but this doesn’t matter to any of these men. They are soon good friends, and they welcome Ratan into their midst.

The next day, Ratan goes off to his father’s former office and meets Dad’s friend, who sends him off to meet another clerk—and here Ratan runs up against the first dampener. There’s no vacancy here, says the clerk. There was, he admits when Ratan starts asking, but now there isn’t. If Ratan is so insistent, Ratan should leave behind an application for the job. If something comes up, they will contact him. Ratan has had the foresight to bring along an application, and presents this. Though the clerk keeps it, he gives Ratan a piece of advice: Ratan’s handwriting is atrocious; he should type out all future applications.

Ratan, while heading back out, stops by at Dad’s friend’s desk, and the old gentleman is surprised to hear that Ratan hasn’t got the job. A clerk (busily—and realistically—at work, sandwiching carbon paper between pages before inserting them into the typewriter) remarks dryly that a relative of the manager’s has been given that job. If it hadn’t been this relative, it would have been that.

This nepotism, Ratan is to soon discover, is all across. Along with hundreds and thousands of BAs and MAs and other well-qualified men, all of them queueing up for too few jobs.

Ratan, though, is not one to lose heart easily. He rents a typewriter, buys a few newspapers everyday, scours the help wanted ads, highlights the ones he’s interested in, and sends off applications by the dozen. Later in the day, he goes out, walking from one office to another, cold-calling in an attempt to find a job. He is unsuccessful.

In the midst of all of this, Ratan falls in love. The lady in question is Seema (Sheila Ramani), a college girl who lives in a house opposite Ratan’s room. Seema and Ratan first see each other through the windows in their respective rooms, and after they happen to meet at the nearby bus stand, it takes only a few more meetings for them to fall in love.

Till now, Ratan’s joblessness is a relatively minor inconvenience, no more. He is convinced that a good job is waiting just around the corner (“BA kiya hai, ghaas nahin kaati hai”—“I’ve done a BA, I haven’t been cutting grass” is Ratan’s boast). Yes, the typewriter-renter is pestering Ratan for money, and yes, the soles of Ratan’s shoes have worn down so much that there are now big holes in them. But. It’s just a matter of time.

And then, one evening, a telegram arrives. Uma is dead.

Ratan, already pretty much at the end of his tether, breaks down—especially as he sees the irony of another missive which has arrived at the same time: the sanatorium where he had applied for a bed for Uma has sent a note to say that they now have a bed available for her.

With his friends clustering consoling around him, Ratan weeps. Is this what his BA degree is worth? No job, no prospects of a job? Many degrees, too few jobs? Unemployment and corruption and nepotism—and, when one does get a job somehow, what guarantee is there that the job will last?

In 1953, Bimal Roy had made the classic Do Bigha Zameen. The following year, he made this film, which, in some ways, reminded me of Do Bigha Zameen. Not so terribly depressing (Do Bigha Zameen lite?), but with similar themes: the desperate search for a means of income, the growing frustration and anguish, the help and support that comes from often unexpected quarters. How just the knowledge that there is someone to understand, that one is not utterly alone, is a comfort in itself.

The occasional instances of humanity. Hari, for instance, the servant at Ananda Boarding, who, when he finds that Ratan is in really dire straits, gives Ratan ten rupees. Not that Hari can afford it; Hari is dreadfully poor himself—but because he likes Ratan, he feels for Ratan. And this (as in that moment when Ratan’s mother gives him the money from selling off her jewellery) is recognized by Ratan: in this case, by firmly refusing to take the money.

(Interestingly, at a later point in the film, when Ratan has absolutely no money and can see no way ahead, Hari again gives him money. This time, as they face each other, both of them emotional, Ratan accepts the money, with the words: “Is baar main tumhaare daan ka apmaan nahin karoonga”—“This time, I will not insult this donation of yours”). 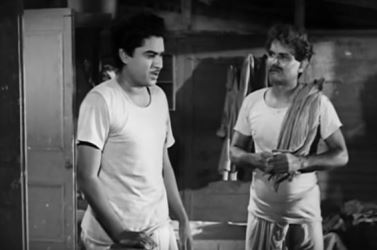 There are people who are hard-hearted and rude (especially among those with the power to give out jobs); there are those who—like Seema’s father—cannot see beyond Ratan’s unemployment. But there are those, like Hari, like Seema, like the three bekaars in the next room, who empathize, who understand.

The acting is good (Kishore Kumar, especially, is understated and good in a role that requires him to go from being light-hearted and somewhat comical, to deep in despair). The songs (written by Shailendra, and set to music by Salil Choudhary) are good, especially Chhota sa ghar hoga baadalon ki chhaon mein.

Some moments of sheer stupidity on Ratan’s part.

Who, having received a very long- and very eagerly-awaited letter of appointment from a company, does not even bother to make a note of the company’s name and address? I’d have thought that if I’d finally got a job after so much trouble, I’d preserve that appointment letter for all posterity and not let it out of my sight. Or at least not until I’d got my first salary.

And, no matter how sure one is of one’s own capabilities, while temporarily (and clandestinely) taking over the duties of a fellow worker, no matter how dire the necessity, doesn’t it make sense to listen to the colleague when he says this is tough work? Wouldn’t it have been easier to offer to take the doctor to the colleague’s home to attend to his ill child, rather than insist on taking over a task one was shaky about?

However, all said and done, this is a decent enough film. Not as accomplished as Do Bigha Zameen, but still good, and a fairly heartfelt plea on behalf of the educated unemployed.

Note: If you decide to watch this film on Youtube, do not watch the version on the Shemaroo channel (even though that is the one with the good print), because the last 20 minutes of the film are missing there. The SEPL Vintage channel, though the print is bad (and is obscured by SEPL’s very intrusive logo), has the complete film.