This post may come as a surprise to those who are familiar with my blog, and with its chronological area of interest: Vinod Khanna, after all, debuted in a film that released in 1969, and this blog focuses on cinema from before the 1970s. His was not even, unlike Rajesh Khanna, a meteoric rise that saw one blockbuster hit after the other. No; Vinod Khanna’s star ascended relatively slowly, and he came into his own only a few years down the line. Well into the 70s, in fact.

But how could I not pay tribute to the one actor who really defines the 70s for me? Even though I most like the cinema of the 50s and 60s, the 70s too had some fine films, some fine film makers. Chupke-Chupke, Sholay, Golmaal, Blackmail, Manchali. Inkaar, Gaddaar, Amar Akbar Anthony. The Burning Train, Lahu ke Do Rang… and there was Vinod Khanna, my favourite actor of that decade. 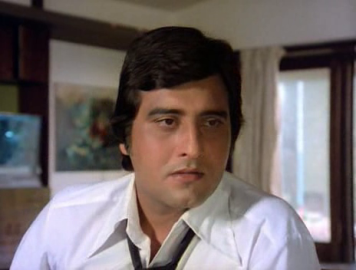 My first memory of a film that I kept thinking would have a catch to it is of Achanak. I watched that on Doordarshan when I was perhaps eleven or so, and I couldn’t get my head around it: a hero, actually killing his wife? Through much of the film, I remember thinking it would somehow turn out that he was not responsible, or that she had not died. That something had happened. Even when it was obvious that the hero was a murderer—and fugitive—I could not hate him. Because Vinod Khanna imbued that character with so much feeling that I was egging him on, to shake off the police, to somehow use his military training to escape…

My fascination with Vinod Khanna has not diminished in the years since.  If anything, as I’ve seen more of his films, it’s increased. Because this man was a bit of an anomaly. For a start, despite looking the way he did, he began, not as a hero (or even a supporting actor), but as a villain. (In the avoidable Man ka Meet, which also marked the debuts of Leena Chandavarkar as well as Som Dutt, brother of Sunil Dutt). Even though Sachcha Jhootha saw him playing a cop (one of many he was to play in the 70s) with a very pretty Naaz as his love interest, Vinod Khanna was soon back to playing villains—in Aan Milo Sajna, for instance, and as the most dashing dacoit of them all, Jabbar Singh, in the precursor to Sholay, Mera Gaon Mera Desh.

It was only later that he began to be cast as something other than the villain.

How many Hindi film heroes began their careers as villains? Some (Ajit, Pran, Premnath) began as heroes and turned to villains as their careers progressed. Some (Prem Chopra is a stellar example) were rarely seen in roles other than that of the villain. Vinod Khanna is the only actor I can think of to have started off as a villain in several films before eventually becoming a leading man.

He acted in all sorts of films, as all sorts of characters. Some were memorable, some were not. Some may have been outshone by other characters (most people tend to remember Amitabh Bachchan’s Anthony in Amar Akbar Anthony, but for me, the quietly dignified yet courageous Amar is the favourite). 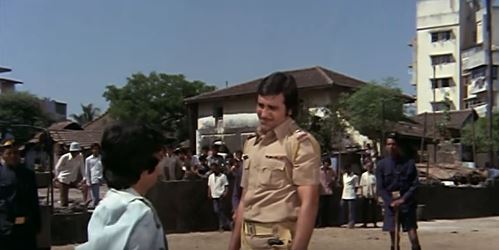 Most were the ‘usual’ heroes, the men who could stand up against a den full of villains and still come out on top. The men who were devoted sons, loving brothers, faithful lovers. Patriots, often in uniform. Upright men, inherently honest men, even if they sometimes used dishonest means to earn their livelihood.

A few, even if heroes, were less conventional. Heroically and self-sacrificingly giving up love and life to another man (whom I never liked as much as Mr Khanna’s character) in films like Qurbani (or, as Anu points out in her comment, at the receiving end of a sacrifice, in Muqaddar ka Sikandar). Falling prey to a vicious little tramp out to ruin the reputation of a quiet professor in Imtihaan. A man on the run during World War II, falling in love with a Chinese woman and getting her pregnant, fully aware all the while that this is not right, because he has a wife back home…

A workaholic who neglects wife and child for his profession. A man who murders his wife. A police officer who allows the stern older brother of his beloved to put paid to their relationship.

He did the usual things Indian cinema expected its leading men to do: he romanced pretty women, he danced and sang and indulged in all the dhishoom-dhishoom we expected. The deeply nuanced roles that went to actors like Sanjeev Kumar may not have been Vinod Khanna’s, but the roles he played, he played well. He played them convincingly, and he played them with a flair that was very appealing. 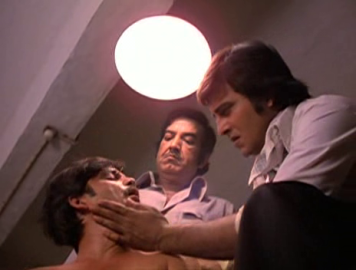 He looked wonderful, he lit up the screen. Whether he was the sole hero of the film or one of an ensemble cast, he was—for me—invariably the one person for whom I wanted to watch the film.