Considering I’ve recently reviewed two Hindi swashbucklers (Baadal and Baadal), both obviously—in one case even with credit accorded—inspired by European sources, I thought it appropriate to continue in the genre for another film. Also a swashbuckler, also inspired by a work from European literature. The Bengali film Jhinder Bondi (‘The Prisoner of Jhind’), based on Anthony Hope’s classic The Prisoner of Zenda (and the novel which Saradindu Bandyopadhyay—of Byomkesh  Bakshi fame—based on The Prisoner of Zenda). 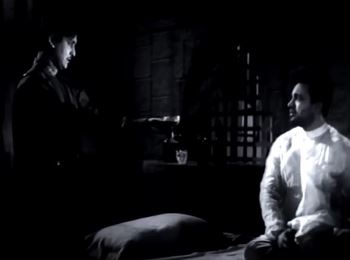 After a very brief and pretty much unnecessary scene on a train, Jhinder Bondi switches to a scene in a Calcutta club, where a dignified man in uniform (? Radhamohan Bhattacharya?) wanders about. He happens to see a bout of fencing in progress, and looks startled. He turns to a passerby and asks if one of those fencers is Shankar Singh. No, he’s told, that’s Gauri Shankar Rai. The man in uniform insists, but has to retract his assertion when the fencer takes off his mask. 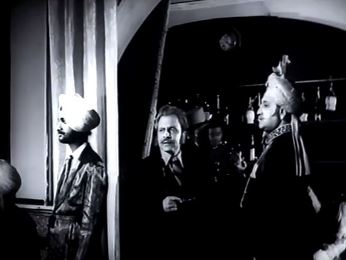 Shortly after, the uniformed man turns up at an impressive mansion, wanting to meet Gauri Shankar Rai. Gauri Shankar Rai has just returned from the club, so while he’s getting ready to meet this unexpected guest, Gauri Shankar’s elder brother plays host. The man in uniform is struck by a portrait he sees on a wall. He asks whose portrait that is, and is told that it is that of an ancestor, Kali Shankar Rai. 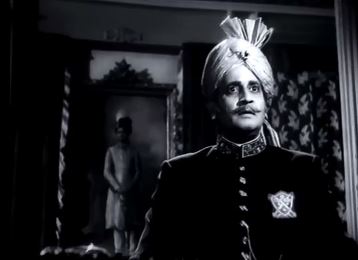 When Gauri Shankar (a moustached Uttam Kumar) enters, the uniformed man gets down to business and explains matters to the two brothers. He informs them that he is the General, the Fauji Sardar, of a kingdom called Jhind, which lies in the mountains. The heir to the throne of Jhind is Shankar Singh, and he has a younger brother named Udit Singh. Udit Singh is a greedy, rapacious man who covets the throne and has tried to get it for himself ever since the last king, the brothers’ father, passed away. 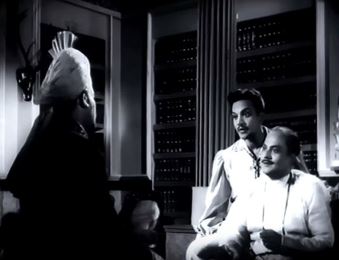 … and Udit Singh is certainly not the man for Jhind. Shankar Singh is a drunkard, lazy and a good for nothing, but at least his heart is in the right place, and the people of Jhind love him. Of the two evils, the General seems to suggest, Shankar Singh is the lesser. 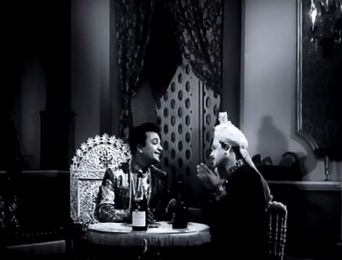 The General, searching desperately for Shankar Singh, has come to Calcutta, and fate has brought him to cross paths with Gauri Shankar, who is the spitting image of Shankar Singh. Will Gauri Shankar help, by coming to Jhind, pretending to be Shankar Singh so that he can be crowned and act as king until Shankar Singh can be found?

Gauri Shankar agrees readily—he probably thinks of this as an exciting adventure—but his elder brother refuses. This is dangerous business; Gauri Shankar should stay away. 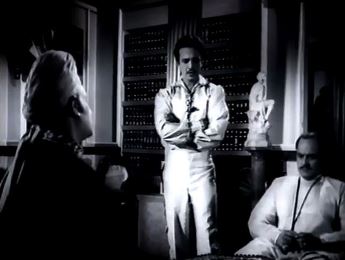 When the two men have ridden off on, the station master immediately sends a telegraphic message to someone, who prints it out and hands it over to a messenger. The messenger hurries, taking a boat across a lake and reaching a fine palace [I recognize this, and the locales: Udaipur, which has featured in God knows how many films in how many languages]. The General’s arrival has not gone unnoticed. 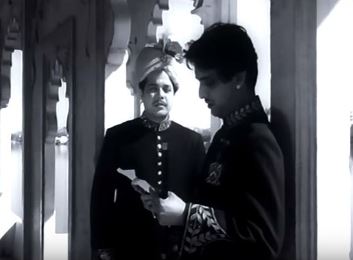 They are to meet yet another man, and this one a formidable adversary. Mayurvahan (Soumitra Chatterjee), Udit Singh’s henchman, astride a horse, passes by. He calls out tauntingly to the General, asking him who his companion is (Gauri Shankar has turned his face away again, and Mayurvahan asks if this is a woman, all shy and demure?) He doesn’t wait for an answer, though, and rides away. 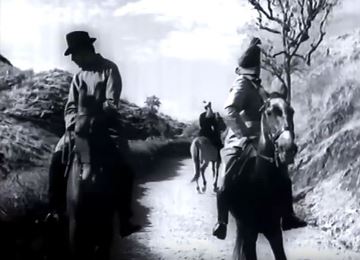 Within the next few hours, Gauri Shankar (now with his moustache shaved off) is masquerading as Shankar Singh and has made some progress. Firstly, he’s been examined by the royal physician, who’s been surprised to find ‘His Highness’ so well, with no signs of a failing liver or other consequences of debauchery. When the doctor is gone, the General tells Gauri Shankar that this is one hurdle crossed; if the doctor could not tell that this man was not Shankar Singh, their secret is safe. 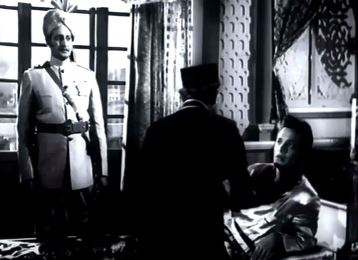 Secondly, he’s met his ‘brother’, Udit Singh (Tarun Kumar), who has outright asked him, “Who are you?” Gauri Shankar later remarks to the General that that was an odd thing to say (why, after all, would Udit Singh ask his own brother who he was? Would that not imply that Udit Singh knew this could not possibly be Shankar Singh?) 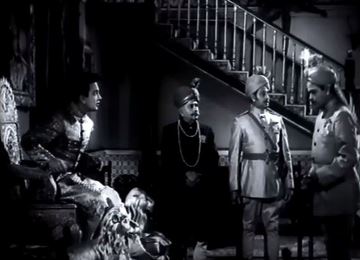 The General also tells Gauri Shankar that the hilltop fortress that can be seen from the palace is Shaktigarh, which is part of Udit Singh’s property. Could it be, asks Gauri Shankar, that Udit Singh has imprisoned Shankar Singh there?

Soon, Gauri Shankar has also realized that he is not merely to be proxy king, he is also to be proxy fiancé—Shankar Singh having been betrothed to Kasturi Bai, the Queen of Jharowar. Gauri Shankar is a bit sceptical about this, but there’s nothing much he can do if he’s to see this masquerade through till the end.

He soon also discovers that all the attendants of Shankar Singh (except the male guards) are women. Gauri Shankar finds this odd, but the General assures him that Shankar Singh does not even glance at the women [which strikes me as strange, considering how Udit Singh has lured him away on earlier occasions…]. In fact, says the General, the highest and most noble families of Jhind consider it an honour to have their daughters serve His Highness. 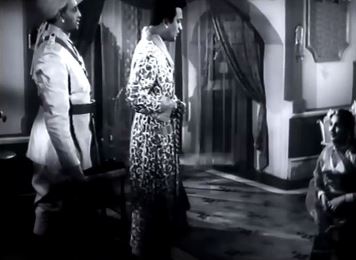 Things begin to move fast now. In between brief scenes of a disheveled and unshaven Shankar Singh sitting in a prison cell and being occasionally threatened by Mayurvahan, we have Gauri Shankar being king. In letter (he is duly crowned, with an edict being sent by the British, who—this being pre-Independence India—rule the roost), and in spirit (he soon endears himself to various servitors, especially his maid Champa and a guard, Rudraroop (Dilip Roy), whom Champa is in love with.

Also, very importantly, he meets Rani Kasturi Bai (Arundhati Devi), his supposed fiancée. Kasturi Bai looks severe and distant to begin with; she ceremonially greets him with an aarti and so on, but there is obviously no warmth in her towards her betrothed. It’s only when the  trolley of wines is wheeled in and Kasturi Bai reaches out to pour ‘Shankar Singh’ a glass that the situation begins to change: because Gauri Shankar stops her, saying he’s given up drinking. 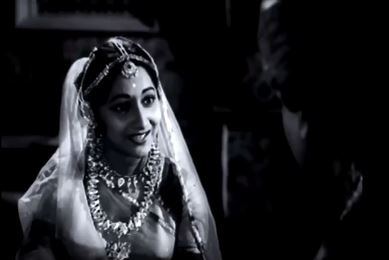 By the end of their date (so to say), Kasturi Bai has definitely thawed towards Gauri Shankar, and within a few days, what with the frequent exchange of letters, it becomes obvious that she has fallen in love with him, as he has with her. She even admits that she had never really liked him earlier, even though she’s known him since childhood. Now, suddenly, though, he seems a changed man… 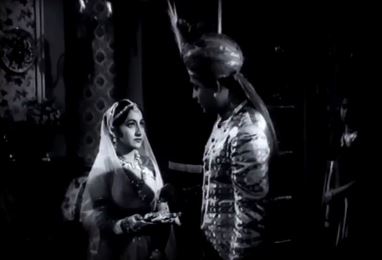 What lies in store for Gauri Shankar, for Kasturi Bai, for Shankar Singh, and for Jhind?

I haven’t read Saradindu Badopadhyay’s Jhinder Bondi, but the resemblance of this film to the plot of The Prisoner of Zenda is startling—I wonder how much Bandyopadhyay himself deviated from Hope’s plot? Almost everything, from the lookalike (who’s a lookalike not because of sheer coincidence, as in Hum Dono, but because there is a shared ancestry) to the political machinations, the fiancée who must be kept in the dark, to even the name of the state (Jhind? Zenda? Too similar?)

One important deviation is that Jhinder Bondi doesn’t feature a mistress for the king; Shankar Singh is a drunk and possibly a womanizer too, but there’s no equivalent of an Antoinette de Mauban here. This is also a less complex plot, with fewer antagonists.

Uttam Kumar and Soumitra Chatterjee, two actors whom I love, and together, too! Double joy. Arundhati Devi is an actress I don’t recall having seen before, but she was striking—and very convincing as a dignified Rajput queen.

The locales, which are stunning. From the palaces to the hilltop fortress, the looming ramparts and the plush interiors: everything fitted perfectly. 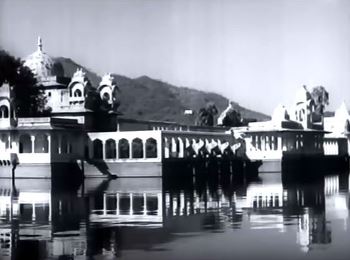 And, lastly: Ali Akbar Khan’s music. There’s very little music, but it’s there, mostly in the form of snatches of classical Hindustani music sung either by Shankar Singh, or for his entertainment—and it’s very good.

The seeming disjointedness of part of the film, though I don’t know if this is the fault of director Tapan Sinha, editor Subodh Roy, or the video production company that created the version I watched on Youtube. For the first three quarters or so, the story moves along logically enough; after that, as it races towards the climax, it suddenly starts leaping forward, moving too swiftly for my liking. In the process, it creates an impression of extreme unevenness: the first part of the film good and well-paced, the second too quick, and so a bit of a let-down.

For me, a big part of the let-down was in the character of Soumitra Chatterjee’s Mayurvahan. Don’t get me wrong; I thought Mayurvahan was a good Indianized version of Rupert of Hentzau, and I thought Soumitra Chatterjee pulled it off brilliantly: that impudence, the arrogance, that youthfully handsome audacity: all were perfect. My discontentment lay in that Mayurvahan got too little time, too little space. He, really, is the main antagonist, not Udit, and he is certainly far more interesting. I would loved to have seen more of him, more of his arrogance. (Also, Mayurvahan’s motive seemed somewhat weak for me, at least in keeping with his character). 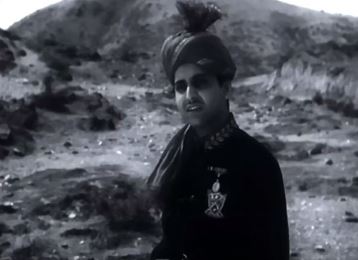 Still, though: an entertaining film, and one definitely worth seeing if you like Uttam Kumar, Soumitra Chatterjee, and/or swashbucklers.