I’ve been on a swashbuckler spree these past few weeks, what with a couple of Hindi films and then the Bengali film, Jhinder Bondi. Before I drift off into another genre, I decided I may as well finally watch a film that has been in my to-watch pile for several years now: Fanfan la Tulipe, or Fanfan the Tulip, a swashbuckler with plenty of comedy and romance thrown in. This, originally made by director Christian-Jaque in 1952, was remade in 2003, this time being directed by Gérard Krawczyk.

Fanfan la Tulipe starts off funnily with a dryly witty narration about war, which plays out against a background visual of French soldiers at war. It is the reign of Louis XV (Marcel Herrand). The Seven Years’ War is in progress, and with more men having been killed than are left alive, Louis (who loses hats, not heads, and is therefore able to swiftly get a new hat every time) announces that more Frenchmen must enlist.

The scene shifts to the countryside, where a soldier, Sergeant La Franchise, has got his men to set up a stage on which he’s standing and egging the local peasantry on to enlist. (La Franchise is to get a bounty for every man who enlists, so he has a stake in this). Barely has La Franchise got into the groove than he loses most of his audience: a man runs up to one of the peasants standing there to say that his daughter, Marion, is being—pardon my French—tumbled in the fields.

The irate father and his friends, plus a bunch of curious bystanders, immediately race off into the fields and go searching among the haystacks. The guilty couple is soon found, though neither Marion nor her lover Fanfan (Gérard Philipe) look especially guilty. In fact, neither of them is taken by the prospect—which Marion’s outraged father insists upon—of getting married. Immediately.

Fanfan tries all he can to get out of this shotgun wedding, but he’s heavily outnumbered. They quickly tie him up and push him—and the equally unwilling Marion—towards the village square, all the time heaping abuse on Fanfan and his Parisian ways. This man, it is obvious, is an outsider with all the fashionable and rakish ways of the capital, and the peasants do not approve.

As the procession is hurrying along, a girl (Gina Lollobrigida)—a complete stranger to all of them—pops up. She’s dressed as a gypsy, and without being invited to do anything of the sort, begins to read Fanfan’s palm. He will fight for the King, she says, and will win great glory. And he will marry the King’s daughter! Fanfan is suitably impressed, especially with that bit about marrying the King’s daughter. Yessir, that would be nice indeed.

Therefore, as soon as they reach the village square, Fanfan makes a break for it, escapes from his captors, and runs up to La Franchise. He enlists in a matter of moments (it’s all a question of signing a piece of paper, after all), and now that he’s a soldier, the peasantry can’t touch him. Marion’s father and his supporters stand around and fume, but that’s all they can do.

Preening on the stage, Fanfan suddenly notices a familiar face among those taking down the props and getting ready to dismantle the stage. The gypsy girl! That’s no gypsy, says one of the other soldiers; that’s Adeline La Franchise, the sergeant’s daughter. She goes around pretending to be a fortune-telling gypsy in order to coax the peasantry into joining, telling them of the good fortune, the fame and high rank and wealth that will be theirs… Fanfan tries to run off, but it’s too late. Whether he likes it or not, whether he’s been trapped into this or not, the fact of the matter is that he’s a soldier now. 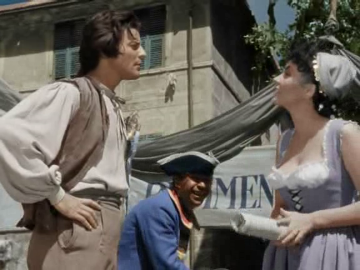 As they make their way through the woods, the Regiment of Aquitaine (which is what this bunch is part of) runs into a bandit gang waylaying a passing carriage. Sergeant La Franchise is quick to tell his men to duck; he won’t get a bounty for men who’re dead before they’ve gone into battle. But Fanfan pays no attention and goes racing ahead, sword and dagger out, to the rescue of whoever is in the carriage…

…which, as it turns out, happens to be the Princess Henriette (Sylvie Pelayo), accompanied by La Marquise da Pompadour (Geneviève Page). They are so grateful to Fanfan for saving them from the bandits that Madame de Pompadour kisses him, and he is so thrilled he kisses her back, and then proceeds to kiss the princess. It’s only when the royal guards—who’ve ducked into the shrubbery at the sight of the bandits—arrive that Fanfan discovers who this is. The King’s daughter!

Within moments, the two ladies have climbed into their carriage and gone their way, but as they leave, Madame de Pompadour asks Fanfan his name, and then hands him a lovely silver brooch in the form of a tulip. “Fanfan la Tulipe” she dubs him, and our hero takes that name. Fanfan the Tulip. 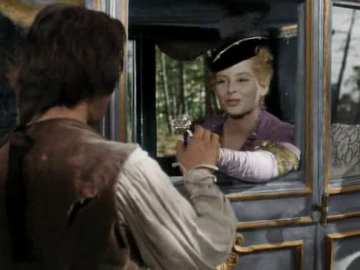 Soon, Fanfan and his fellow recruits have reached the place where the Aquitaine Regiment is encamped, and here they begin their training. The somewhat effeminate captain introduces himself before leaving the rookies to the far from tender mercies of the officers and sergeants who will train them, including Fier-à-Bras (Noël Roquevert). Fanfan, also, has made friends, especially with a bumbling but endearing character named Tranche-Montagne (Olivier Hussenot), whose wife and eight children follow the camp.

The irritating Fier-à-Bras is besotted with Adeline and keeps pestering her to marry him. Adeline has no use for him, and has, instead, gone and fallen in love with Fanfan. She doesn’t tell Fanfan that outright, but it’s clear to everybody—except Fier-à-Bras, who is convinced Adeline returns his ardour.

Fanfan himself, while aware that Adeline is attracted to him, doesn’t let this bother him. Now that he’s met the princess (his future wife, he’s convinced, even though that belief is based on the ‘prophecy’ of a self-confessed charlatan like Adeline), he knows that it’s only a matter of time before he is son-in-law to the King… 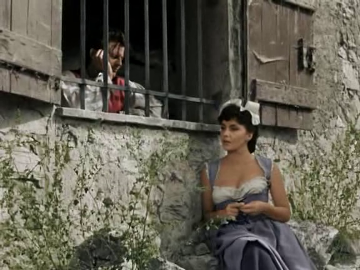 Therefore, when it so happens that the Aquitaine Regiment, on its way to the Front, finds itself encamped right next door to the chateau where the King is in residence (with the princess, Madame de Pompadour, etc), Fanfan takes his chance. This is the opportunity to get to know Princess Henriette better; he cannot let it pass. So, helped by his faithful friend, Tranche-Montagne, Fanfan attempts to sneak into the palace.

… with disastrous and/or wide-ranging consequences, which will include victory for the French in the upcoming battle.

Pretty much everything, especially the farcical nature of it, from beginning to end. Fanfan la Tulipe never takes itself seriously. Whether it’s the humour of the narration that comes in every now and then or the crazy shenanigans of Fanfan & Co., there’s never a moment when I even imagined that things would take a sad or melodramatic turn. It’s hilarious all through, and I got the distinct impression that all the actors were enjoying themselves a good deal. That really makes a comedy become even more fun.

The swashbuckling. As much as it is a comedy (and, to some extent, a romance), Fanfan la Tulipe is also a swashbuckler, and a very good one at that, with much swordplay, leaping around, horse riding, and all. Interestingly, Gérard Philipe insisted on doing all his stunts himself (he didn’t emerge unscathed; one hand was pierced by a sword, and he had other injuries as well). 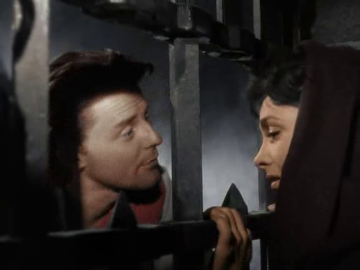 Since the only thing I didn’t like about the film constitutes a spoiler (it involves a sudden relationship concocted at the very end), let me move straight on to some trivia:

Fanfan la Tulipe, a fictitious character, appeared in songs from the 17th century, and became popular enough to be depicted several times on screen. The first cinematic adaptation of Fanfan’s adventures was probably in 1907, in a short silent film directed by the world’s first female director, Alice Guy. A 1925 film starred Aimé Simon-Girard in the title role, and the latest film—in 2003—had Vincent Perez playing Fanfan.

… which brings me to:

As is usual when I’m reviewing a film of which I’ve seen more than one version (or of which, if it’s adapted from literature, I’ve read the original work), a comparison of the two. Since Fanfan la Tulipe was remade in 2003, I decided I had to watch this 21st century version too, and see how it compared with the 1952 one.

The 2003 Fanfan la Tulipe has its first half very similar to that of its 1952 original, though with some departures. Among these, the major one is that Adeline, far from being Sergeant La Franchise’s daughter, is Fier-à-Bras’s fiancée. And why she’s his fiancée, since she obviously cannot stand him, is anybody’s guess. There are other minor differences here, too, such as that Fanfan is not just making love to the one girl he’s being forced to marry, but seemingly dozens of others: half the girls in the village claim to be engaged to him, and he agrees that he is.

In the second half, the film goes pretty much its own way. A traitor is inserted into the plot; Fanfan, after realizing he doesn’t love the princess after all, falls headlong in love with Adeline; and the swashbuckling that ensues is all centred round Fanfan subduing the traitor and the French winning the battle. 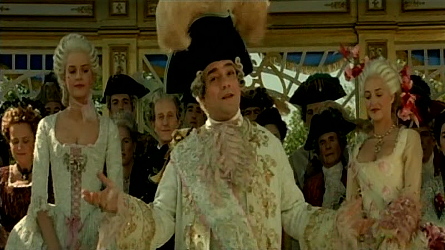 While the protracted (not to mention tiresome) jokes of the first half made me roll my eyes, what really made me dislike the 2003 Fanfan la Tulipe was the way it leaves all its humour behind and starts to take itself very seriously indeed. Fanfan and Adeline have some syrupy, sentimental dialogues—which, along with the chemistry between Penelope Cruz and Vincent Perez—would have been fine in a seriously romantic film, but bored me in what, till then, had been a fairly funny story. This romance, coupled with the tale of the traitor, eventually tipped the scales for me regarding which film I liked more: definitely the 1952 Fanfan la Tulipe, which is a lark from beginning to end, and which never (not even when Fanfan and Adeline have fallen in love, not even when death stares Fanfan in the face) ever becomes serious.