For a bibliophile like me, this is a very special day, because it celebrates books. I can’t imagine life without books (I read an average of about 80-90 books every year, and would probably read double that number if I didn’t watch films or Korean dramas). I love reading, I thrive on reading, I get restless if I don’t have something to read.

Hindi cinema is not devoid of a connection with books. Lots of films have been based on books, both homegrown and foreign works; lots of protagonists in films have been shown to be novelists or poets. And, though most fashionable, bouffant-topped or suit-clad heroines and heroes are shown leafing through magazines (invariably Life) there is the occasional appearance, onscreen, of a book. Some are real books by real-life authors: books you and I could read. Some are books specifically designed for the film—mostly in cases where an important character is a writer, and one of his/her works is shown.

Some books are props. Some are more.

Without further ado, then, the ten scenes. All, as usual, are from pre-70s Hindi films that I’ve seen. The one criterion I’ve imposed on myself other than this is that the book should be an actual work, not a fictitious publication written by a character in the film (or conveniently placed in the film as a prop to further a theme—which is why books like Daera and Anupama, in the films of the same names, don’t count). It should be a book you and I could possibly read.

1. Waheeda Rehman with Meghdoot (Khamoshi, 1969): This was the first book that came to my mind, because that frame—Waheeda Rehman, clutching it to her chest, standing beside a mesh door, her eyes swimming with tears—is so iconic. In such an iconic song. This is a woman who was going off, bearing a favourite book to be gifted to the man she loves (and who, she is convinced, loves her too). And then, a chance encounter, and all her dreams lie shattered. She walks on towards him, listening to his song, the book still in her hands. 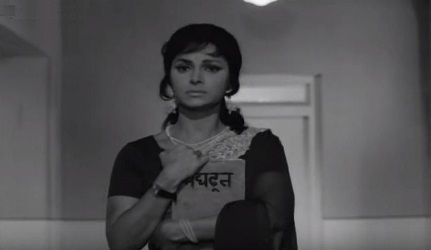 2. Sharmila Tagore with When Eight Bells Toll (Aradhana, 1969): Another Rajesh Khanna film, also from 1969—but very different from Khamoshi. The book here too couldn’t be more different from Meghdoot: Alistair MacLean’s spy-and-detective thriller, When Eight Bells Toll, is a far cry from the classic poetry of Kalidas. The circumstances are very different too: Sharmila Tagore’s Vandana is a bubbly, carefree girl—just the sort who would want to read something light and fast-paced on a train journey.

3. Sharmila Tagore with 6 Great Modern Short Novels (Waqt,1965): Sharmila Tagore again, and in a scene where the book is used (and misused, with her flipping its pages about with gay abandon, treating it with a disdain I find shocking)—as a prop, nothing else. There’s no clue which six novels those are, but this edition (which was first published in 1954 and includes James Joyce’s The Dead,  Herman Melville’s Billy Budd, Gogol’s The Overcoat and William Faulkner’s The Bear) might be it. 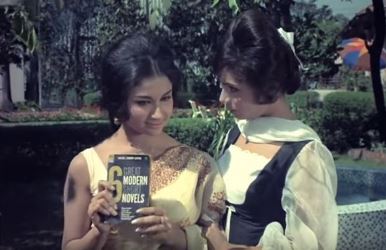 4. Nanda with Lolita (Jab Jab Phool Khile, 1965): Nanda’s hip, foreign-educated miss in Jab Jab Phool Khile comes with an appropriate prop: a novel that’s bold, controversial, a novel not for a time-pass reader but for a bibliophile of some standing. Not, certainly, the sort of person one would expect to fall in love with an illiterate houseboat wallah. 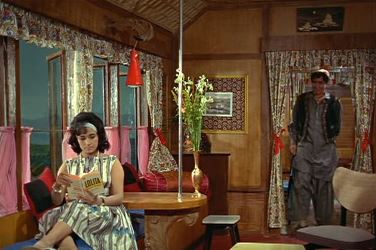 5. Waheeda Rehman with Murder Murder Murder (Baazi, 1968): This one’s not a prop meant to show the character of the character (though it probably does, to some extent—Waheeda’s a smart modern girl, so her reading murder mysteries isn’t surprising). Rather, in a film that’s centred around a murder followed by some very odd revelations, it’s a neat little way of adding to the tone of the film.

Murder, Murder, Murder, by the way, is a collection of ten short stories, by authors that include John Dickson Carr, Ellery Queen, Robert Arthur and Lillian de la Torre.

6. Tanuja with Bachelor’s Joke Book (Bahaarein Phir Bhi Aayengi, 1966): The bubbly and irrepressible Tanuja first appears in Bahaarein Phir Bhi Aayengi lying on the carpet and reading Bachelor’s Joke Book and giggling. Giggling in a genuine, laughter-bubbling-up-from-deep-within way. In fact, the book hides her face for a good part of the scene, and even when she turns away to attend to a telephone call, reluctantly having to put her book aside, we don’t see her face until she bursts out crying at the news she receives: that the exam results have been declared. A fun girl, a bit of a clown, and definitely the sort to be reading a joke book.

(Interestingly, later in the film, Tanuja’s co-star, Dharmendra, gets into a lift while reading a book—something by Rabindranath Tagore, though the title isn’t visible—and is so engrossed in the book that he doesn’t notice, for a while, that there’s a fellow passenger as well). 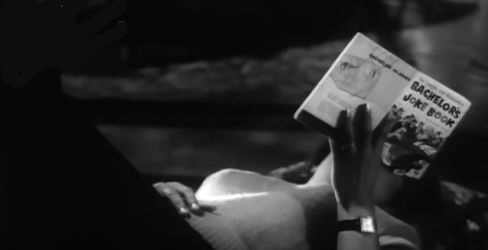 7. Leela Chitnis with Brahmacharya (Suhaagan, 1964): A book by Mahatma Gandhi about his thoughts on celibacy (and his experiments with it?) is bang on in a film about a man whose marriage cannot be consummated and who is forced to be celibate. In this scene, two people read the book by turn (and it’s implied that a third has already read it). Guru Dutt’s character discovers Brahmacharya in his wife’s (Mala Sinha’s character’s) table drawer. He reads it, and is discovered by his mother, played by Leela Chitnis. Egged on by her distressed son (who now realizes just what his wife is going through), she is the one who actually reads out aloud an excerpt from the book.

(Incidentally, I haven’t been able to find an exact copy of this book, at least not among the search results online. It seems to be an extract—possibly from chapter 61—from My Experiments with Truth; since Gandhi’s writings were so widely published, in different forms, this doesn’t seem like something put together just for the sake of the film).

8. Dharmendra with Othello and Tanuja with The Tribal World of Verrier Elwin (Izzat, 1968): This is a particularly satisfying scene and my favourite one on this list, simply because there are two people with two different books, and they’re in a library (a home library, which looks fairly well-populated, too). Dharmendra’s character, come to this house for the first time, is introduced to Tanuja’s character, who holds a book as she leads him into the library. He asks her which book she’s reading, and she says it’s Elwin’s The Tribal World. Ah, so you like sociology, he remarks; and she’s quick to say that she likes novels and drama too. He, by then looking at some of the other books in the library, comes across a copy of Othello, and they begin to discuss it.

So heartwarming to a book lover’s soul, that a romance should begin in a library, between two book lovers, over a discussion about a literary character.

9. Dev Anand with Kamayani (Kaala Bazaar, 1960): And before him, Vijay Anand. Vijay Anand’s character, sitting in a garden with his girlfriend (Waheeda Rehman) is reading Jaishankar Prasad’s Kamayani and his girl is gradually getting more and more miffed at his ignoring her—so, in a fit of playful annoyance, she grabs the book and throws it over the hedge, where it falls on the head of another man (Dev Anand) who’s lounging about on the lawn. Kamayani piques his interest, and once he’s begun reading it, it encourages him to read further, to acquire a library of his own from the ill-gotten gains of his life of black marketing.

10. Sunil Dutt with Sansaar Shastra (Padosan, 1968): And, to end the list, another book that plays an important part in a film. Sunil Dutt’s Bhola in Padosan models his life on the principles set forth in Sansaar Shastra, a work on how to live in the world—in essence, a book expounding on the virtues of adhering strictly to the four ashrams set forth in ancient classical texts. Bhola, being the lakeer ka fakeer that he is, takes Sansaar Shastra to be gospel truth and goes about with it for a good bit of time before realizing that there are better ways of spending time than reading an outdated book like this.

I admit I haven’t been able to find a copy of this book anywhere online, but that’s possibly because this is an old book and maybe just not available any more. But it’s definitely a book the contents of which you should be able to find easily enough in similar works on traditional Indian philosophy. 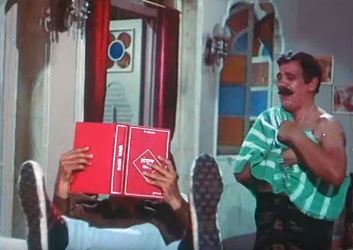 94 thoughts on “People with Books in Hindi Cinema”