Hindi cinema has its share of films in which children play an important part. And not just as the childhood version of the adult who plays the lead. Sometimes (Dhool ka Phool, Bandish) as unwanted. More often (Do Kaliyaan, Andaaz, Detective, Ek Hi Raasta, Laajwanti) as the means of bringing together two adults in a romantic relationship, or trying to hinder that relationship.

Less often, but I think often with more impact, children play the lead role: the film is about children, and the adults are mostly peripheral. Boot Polish and Diya aur Toofaan fall into this category. As does Naunihaal, about a little boy who sets off to meet Jawaharlal Nehru.

The story begins in Panchgani, in a boarding school for boys. While the Principal (Balraj Sahni) is battling a board of directors who want to raise school fees, there is a disturbance outside, and the furore spills over into the Principal’s office. Raju (Babloo) has again had a fight with one of his classmates, who called Raju an orphan. Which is the truth, but Raju hates the epithet.

The Principal, having sent them all on their way, explains to the directors. Some time back, the Principal had gone on leave to his village, to fetch his wife and child to Panchgani. On reaching home, he found that an epidemic had struck and killed off not just his own family, but most of the village as well. Heartbroken, he was leaving the village to return to Panchgani when he found this little boy all by himself. Raju had been orphaned, both parents (and presumably any other relatives who might have looked after him) dead.

Taking pity on Raju, the Principal brought him to the school. And here, sadly, he is reminded again and again of his situation. Not just by the boys themselves, but by what he sees: loving parents coming to meet their children, to shower praise and affection on them.

Not that Raju doesn’t have his share of loving supporters. His teacher, Uma Didi (Indrani Mukherjee; Raju tries to address her as ‘Teacher’, like the other boys do, but keeps slipping and calling her ‘Didi’ instead, which Uma does not mind) is very fond of Raju, and is even rather protective of him, as is the Principal.

Raju’s best friend is Billoo (Junior Mehmood), who even though he does quarrel with Raju now and then, also looks out for the boy.

And there is Rakesh (Sanjeev Kumar), Billoo’s elder brother. Rakesh, unknown to Billoo or Raju, is in love with Uma and she with him.

In fact, shortly after we first meet these two—both of them running into each other at school, Rakesh (former alumnus of the school and still much loved by the Principal) being introduced to Uma by the Principal—Rakesh and Uma both maintain the polite façade of strangers until they’re alone and Rakesh reminds Uma she’s supposed to come and meet his parents (Shaukat Azmi and Brahm Bhardwaj), who, he’s sure, are quite amenable to the match. 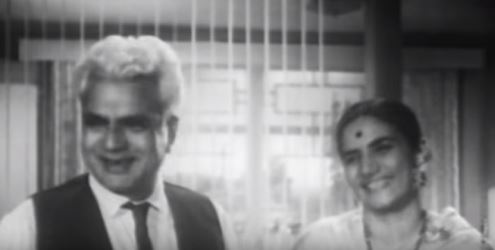 For the time being, the Rakesh-Uma romance, barring one lovely song (Tumhaari zulf ke saaye mein sham kar loonga) goes on the back burner. The focus, instead, shifts to Raju. Things, instead of getting better, have been getting worse for the boy. A teacher (Asit Sen) complains to the Principal that Raju—who has also been throwing tantrums, wrecking classrooms, etc—is having regular fights with his fellow students.

The Principal, fortunately, is level-headed enough to understand that this is not Raju’s fault, but something the boy needs help with. So he takes Raju aside and asks him what is the matter, only to have that old problem resurface: Raju bursts out that he has nobody, nobody at all to call his own. No family. No parents, no uncles, no aunts.

At this, the Principal has a brainwave. There, in the library, is a painting of Pandit Jawaharlal Nehru, ‘Chacha Nehru’. He takes Raju over to the painting and tells Raju who that is: his, Raju’s, chacha. Raju is astonished: really? He really has a chacha, an uncle? But why doesn’t his chacha come to visit him? Where does his chacha live? [Personally, I think Raju seems a little too old to be so woefully unaware of who the country’s prime minister is]. 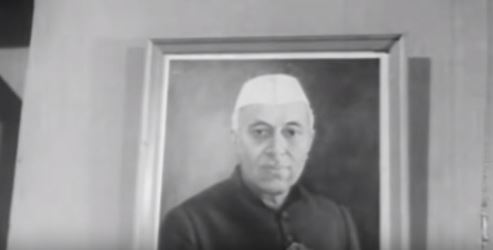 Raju’s questions are deftly deflected, and life goes back to normal—except that now Raju has become a little obsessed with Chacha Nehru. He takes to plucking red roses from the school garden, leading to much angst. One day he ‘borrows’ Nehru’s portrait and takes it away to a corner, where he sits it down while he composes a letter to Pandit Nehru.

And, surprise, surprise! That letter, sent to Nehru, actually receives a reply.

We never do get to know what that reply is, because when an excited Raju comes racing to the Principal, telling him the news, the Principal too is so excited that he collapses, with what looks like a heart attack.

It’s not very clear (thanks to poor audio in the version I watched online) what has happened to the Principal, but it seems to be the result of overwork and stress. The doctor advises him to go off for a stint to a nursing home.

… which, like a sensible man, the Principal does. With the Principal gone, a decision is taken to close the school down until he recovers and returns [a little unorthodox, this? Why can’t the teachers manage on their own? Why isn’t there a Vice Principal? And what if the Principal takes months to recover? What happens to the syllabus? So many questions].

Basically, this is a ploy to have Uma end up being besieged by a bunch of parents, all seeking answers to questions [I wouldn’t be surprised if some of those were my questions, above]. She is so harried that when Raju comes, wanting to tell her something, she shoos him away. 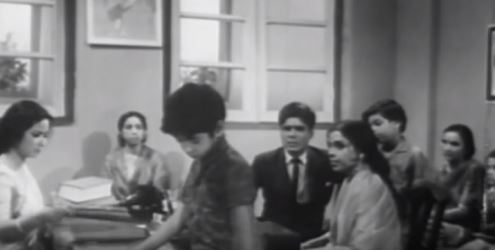 What Uma does not know is that Raju has learnt something very important: his chacha is coming to Bombay to address a gathering at Chowpatty. Raju wants somehow to be able to get to Bombay and meet his chacha. That was what he wanted to talk to Uma about, but when Uma doesn’t have the time to listen to him, Raju takes matters into his own hands. He sees the open boot of a car in which a couple have come to fetch their son from school. Unseen by anybody, Raju gets into the boot [and is lucky that nobody thinks of closing the boot, leaving it wide open all the way from Panchgani to Bombay].

In Bombay, when the car briefly comes to a halt, Raju gets off. Wandering around, trying to find his way to Chowpatty, he is befriended by a quirky, eccentric old man (Harindranath Chattopadhyay) who takes Raju under his wing. The old man has absolutely no money, so Raju pays for a taxi to take them to Chowpatty… where they find that Nehru’s already given his speech and gone. Gone back to Delhi.

Raju is devastated, but only briefly. If he could come to Bombay from Panchgani, surely he can go to Delhi from Bombay? His footloose and fancy-free old friend agrees, and they go to the railway station, all ready to catch a train to Delhi.

But before that can happen, fate intervenes. Raju is involved in a tiff with two street urchins, and they lead him into the clutches of a hoodlum (Gopal Raj Bhutani, who, after working in Bollywood, went on to become a leading action director in Nepali cinema) who kidnaps Raju and hands him over to the villainous Mansaram (Manmohan). Raju ends up in the slums, part of a school of a very different type from the one he was part of in Panchgani: here, the ustaad, Mansaram, teaches his wards to beg. And to make them more effective beggars, he breaks their legs, blinds them, does whatever will elicit pity and generosity from passersby. 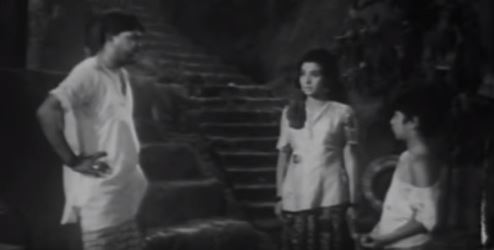 Is this the end of Raju’s dream? Will he ever get to meet Pandit Nehru?

And, in the meantime, Uma (who has discovered that Raju has gone off to Bombay) also comes rushing to the city, accompanied by Rakesh, both of them searching frantically for one small boy in a city of millions…

Firstly, the fact that it’s an unconventional story. In a world of films about adults falling in love and having to fight off everything from parental opposition to criminals, this is a different story. This isn’t the sweet story of a child surrounded by family and facing no more than the usual domestic problems of quarrelling parents or unwanted stepparents: this is far more serious. This is about no family, and the desperate desire to claim someone as family—and what that leads to.

A story, too, which does not pull any punches when it comes to depicting the harsh realities of life. Naunihaal, while it does have Raju getting his fair share of help from total strangers, also has him being faced with the very grim reality of a life far away from the relatively sheltered life of the boarding school. Mansaram and his minions are not nice people, and though Raju is lucky enough to find sympathisers in the slum as well, they are eventually as helpless as he himself is.

Secondly, Madhavi and Jagdeep, as Kavita and Kavi respectively. Both of these actors tended to get slotted into predictable roles, with Madhavi perhaps getting even more of a typecast role—as the heroine’s friend, or the minor moll—in most of her films (Jagdeep did do some fairly dramatic, non-comic roles earlier in his career as an adult). Here, both of them get a chance to show their skills at acting. Madhavi, in particular, impressed me as the blind Kavita, who becomes colleague, elder sister, and teacher of sorts to Raju.

Last, but by no means the least, the music, by Madan Mohan with lyrics by Kaifi Azmi. Several songs in this film are very good, and two stand out for me, both for their music and for their lyrics: Tumhaari zulf ke saaye mein sham kar loonga, and Meri aawaaz suno pyaar ka raaz suno.

The fact that Sanjeev Kumar had so little to do in the film.

Yes, Naunihaal has its glitches, its plot holes, its predictable good Samaritans who come to the aid of the lost and desperate little boy: all of those I can forgive, since they are not drastic enough to really affect the story. But an actor of the calibre of Sanjeev Kumar, and reduced to mainly being a chauffeur for most of the film? Not done.

But then, of course, this was one of his early films, and perhaps the director Raj Marbros and others who produced Naunihaal and did its casting didn’t really recognize this young man’s potential back then…

If you want to watch this film for Sanjeev Kumar, don’t. Otherwise, it’s not a bad film.

In real life, Balraj Sahni with a portrait of Pandit Nehru (Source Unknown).