Some weeks back, I was reading AJ Finn’s psychological thriller The Woman in the Window, in which the protagonist is addicted to old cinema—especially noir and suspense films. I ended up not liking the book much, but at least I got one good thing out of my reading of it: some recommendations. Including recommendations for films that seem as if they were made by Alfred Hitchcock (who, I should explain, is one of my favourite directors), but weren’t.

Of those, one that immediately caught my attention was Niagara, directed by Henry Hathaway. I had heard of this film before—most memorably on IMDB, where I’d seen its poster and read a brief synopsis about a honeymoon couple running into another couple with marital problems. The poster, with a sultry Marilyn Monroe in a hot pink dress, coupled with that description of the film, didn’t conjure up an image of a Hitchcockian film.

That, apparently, was where I was wrong—according to AJ Finn, whose mentions of Gaslight, Rope, Vertigo, Rear Window and other classic suspense films convinced me that he knows his noir cinema. So I decided it was time to give Niagara a try.

The film begins with a brief but dramatic scene beside the famed falls. It’s early in the morning, and George Loomis (Joseph Cotten) goes stumbling down a water-drenched path, almost to the edge. In the slump of his shoulders, in the way he walks, there’s dejection and despair. This is a man who has many battles to fight, and he’s not winning them. Or likely to.

George goes back ‘home’—home currently being part of a resort that boasts of cabins, some of them facing the Niagara Falls. In Cabin B, which George shares with his wife Rose (Marilyn), Rose is lying in bed, smoking a cigarette, when George arrives. As soon as Rose hears George outside, she gets rid of the cigarette, flips over and pretends to be asleep. George’s attempts to ‘wake’ her prove unsuccessful, so he lies down on the twin bed and closes his eyes. 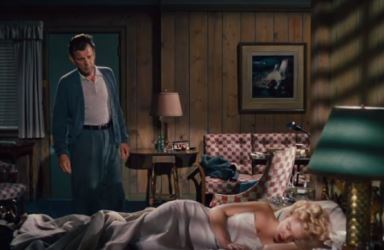 Rose opens her eyes, looks contemptuously at her husband, and turns over, away from him. These two may be husband and wife, but their marriage has obviously soured. 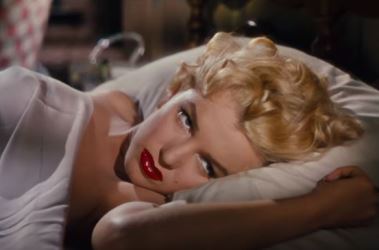 … which is not the case with another couple who arrive at the same resort shortly after. Polly Cutler (Jean Peters) and her husband Ray (Max Showalter, billed here as Casey Adams) have been married three years, but have come for a very belated honeymoon now. They’ve reserved a cabin, and the manager/owner of the place says it’s Cabin B. The Loomises were supposed to have vacated the cabin; he’ll go check. 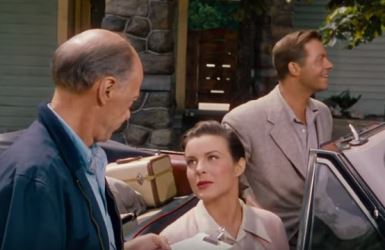 But when the man knocks, Rose Loomis opens the door and explains that she’s really sorry they’re still here. Her husband, who’s been at Letterman (Ray later explains to Polly that Letterman’s a hospital for psychological cases), is feeling really ill. He’s not been able to sleep well ever since they got to Niagara, and even last night—oh, he’s been able to fall asleep only a little while ago. She’s very apologetic about it, and since it would be churlish to insist on them vacating, Polly asks the owner if there’s another cabin she and Ray can have instead.

There is, though it doesn’t really face the falls. The Cutlers don’t mind so much, and Rose is very grateful to them for being so understanding. While she goes off to change and go to the market for some shopping, the Cutlers get ready to do some sightseeing.

The Niagara Falls experience is dramatic, and very wet. Polly, clad in gum boots and bright yellow mackintosh, is standing below the main viewing deck, posing for Ray, who’s trying to photograph. Ray, in his attempt to get the perfect shot, keeps telling Polly to go back a bit further.

No, Polly doesn’t fall off, but when she turns to make sure she’s in no danger of stepping right off the platform, she sees a sight that takes her by surprise.

Polly is quick to rush up to Ray and share this juicy bit of gossip with him. Rose Loomis isn’t quite the devoted wife she was pretending to be.

That night, there is further evidence that all is not right between the Loomises. A group of young people staying at the resort are playing records and dancing. Ray and Polly join them for a while, also dancing, and then sit down for a break and a Coke. They’re sitting there, watching the party, when Rose Loomis emerges from her cabin—and what a sight she is. All the men, including Ray, seem to suddenly become zombies.

But all Rose does is to sashay up to the DJ and hand him a record: will he please play it? The man agrees—who wouldn’t?—and Rose sits down beside the Cutlers, singing along to the song.

Not for long. George, who’s been looming ominously behind the window blinds of his cabin, comes charging out in a rage, whips the record off the turntable, and breaks it. He injures his hand in the process, but goes rushing back into the cabin with his hand still bleeding. 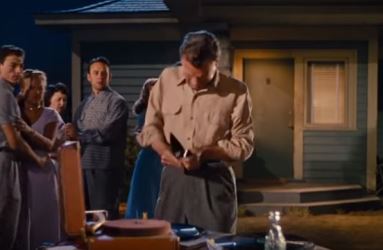 Polly offers Rose some medicine for George’s hand, but Rose refuses: she’s scared of his temper. So Polly, armed with her little first aid kit, goes over to the cabin. George, somewhat sullenly at first, agrees to let her attend to his hand. Even as she cleans his wound and applies mercurochrome, they start talking. She confronts him: he loves Rose a lot, doesn’t he? And George talks about how he first met Rose, and how he’s been unable to keep her amused. After he got back from Korea, they’ve been moving around here and there—a ranch, for instance—and Rose is always bored.

Polly, of course, knows that Rose has found means to entertain herself, but she doesn’t say so.

The next morning dawns to the sight of what seems to have been an overnight reconciliation between the Loomises. There is affection on George’s part as he comes and sits down beside Rose, who’s lying in bed. Rose is all playful and sexy—but after George kisses her, she looks away, and there is mockery in her eyes.

Shortly after, on the pretext of buying the bus tickets (the Loomises have decided to leave Niagara that day), Rose goes to the bus station. George wonders why she’s doing that; it’s not as if you need a reservation on a bus. But Rose’s destination is not the bus terminal itself, but a souvenir shop beside it. Her lover is there; he notices her, then draws a postcard from a rack, scribbles something on it, and places it back in the rack. A message. 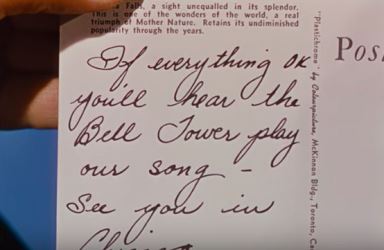 And, later that day, while Polly is posing for her camera-toting husband, a somewhat distraught Rose comes around asking them: have they seen George? He’s not in the cabin.

Knowing what we do, we can guess what has happened. But this is actually just the start of what will turn into a pretty harrowing adventure for Polly…

Niagara was, I will admit, rather like a Hitchcock film, but not totally so, either. Not a whodunit, not even a story high in suspense, but a story where you can tell where this is going, and it doesn’t sound good. Very noir, what with the traumatized man and his bored, adulterous wife; the cat-and-mouse game that Rose and George play; the fact that you can’t tell when the cat will turn into the mouse and vice-versa—and the setting itself.

Several elements, but especially the setting. I’ve never been to Niagara, but this brought to life the majesty of the falls, the noise, the mist, the damp, the danger—all of it—very well.

Then, the story, which was overall pretty good. And the casting: Joseph Cotton, Marilyn Monroe and Jean Peters, in particular, are well-cast and portray their characters perfectly.

And, lastly, the cinematography. There are some very dramatic frames in the film, using everything from massive bells to a staircase to (and this occurs several times) the light-and-shade of a half-drawn window blind. 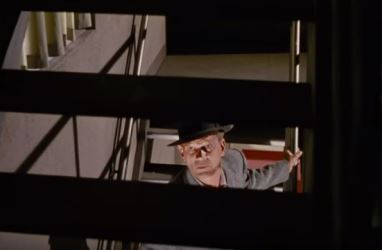 Plus, this striking close-up of Marilyn.

Some inexplicable behaviour on the part of Polly. For one, why on earth doesn’t Polly ever mention to the cops that Rose was obviously having an affair with someone? If she had, maybe the cops would have looked at events in a different light. Why, too, does she not push back at her bossy husband, who keeps shutting her up every time she’s trying to say something important. And why, why would you fight back when a man whom you knew to be a murderer told you to go? That’s suicidal.

Also, didn’t George Loomis carry any identification around with him? Was there no way to tell who he was, other than someone’s word for it?

But, despite these irritants, a fairly entertaining film.

Leave a Reply to It is Tasty Ma! Cancel reply