Or, Ten Reasons Why You Should Watch Jagdeep’s Funniest Film

First, though, a word by way of tribute. Jagdeep, who passed away last week (on July 8th), may not have scaled the heights other comedians, such as Johnny Walker or Mehmood, did, but he had a much longer innings than most. He seems to have debuted in Madhubala (1950) as a child artiste, and worked in close to 400 films, right up to 2017’s Masti Nahin Sasti.

And, interestingly enough, somewhere between his years as a child actor (in Footpath, Do Bigha Zameen, etc) and his heyday as a comedian, Jagdeep acted as leading man in several films… including Noor Mahal, of Mere mehboob na jaa, aaj ki raat na jaa fame.

But, before I go on to the ten reasons, a quick summary of what this film is about.

Veer Singh (Tiwari) is an ambitious general, younger brother to a maharaja. Said maharaja has got both his children, a boy and a baby girl, betrothed to the infants of his best friend, who is maharaja of another kingdom. Veer Singh is so miffed at the thought of losing any chance of sitting on the throne, he kills his brother and (presumably) sister-in-law (it’s not clear who: all this action happens in shadows).

One baby is rescued by someone (it’s not clear who). What happens to the other baby is also not clear.

But suddenly, while Veer Singh is unleashing all hell in the palace, a shadowy figure wearing a Noorjehan-like crown/hat/headgear/whatever appears and makes a prophecy: the Hunterwali will kill Veer Singh someday. Haha.

Veer Singh, furious at this Cassandra, hurls a dagger at him. It misses, but the Noorjehan-hatted man falls anyway, very obviously clutching the knife to his stomach.

Fast-forward to twenty years later. Veer Singh seems to have awakened a little late to the realization that he hasn’t taken any action against his dead brother’s friend. So he takes a group of baddies and attacks that maharaja. The man (?) is taken captive along with his daughter Radha (Lalita Desai? I’m not sure) and son Vijay (Jagdeep).

Fortunately for Vijay, he is rescued by a masked vigilante, Hunterwali (Chitra). Unfortunately, Hunterwali cannot save Daddy and Radha, but she manages pretty well to boss Vijay around in the well-appointed cave she takes him to. Over the rest of the film, when Hunterwali is not going around fighting Veer Singh’s gang with the help of her faithful steed, dog and snake (yes, snake. Is that a new one for you? It is for me), she’s bossing Vijay, mostly by bundling him into bed and telling him to sleep.

At night, Vijay is lured away out of the cave (it’s not clear how) to an old ruin called Noor Mahal. Here, a maalan (a female gardener-flower seller; also Chitra) giggles and lures Vijay forward, through a gate that creaks open and closed by itself. Once inside, she entices him forward, past cackling ghouls with disheveled hair…

… and just as Vijay is getting close enough to the maalan to do more than just admire her, the resident white-clad, singing-spooky-song, female ghost (also, if you hadn’t already guessed it, Chitra) puts in an appearance.

Meanwhile, Vijay’s sister Radha has fooled Veer Singh into thinking that she’s in love with him and wants to marries him, even though this causes much rancour with Daddy, who (naturally) thinks she’s off her head, and a traitor to boot.

Also, Radha has discovered that Veer Singh’s nephew is around too (how he survived Veer Singh’s killing of his family is unclear, and it’s also unclear why Veer Singh gives shelter to him). This man has fooled Veer Singh into thinking he’s a nitwit, so Radha, probably regarding him as part of the successfully-fooled-Veer Singh-fraternity, falls in love with him. And he with her. 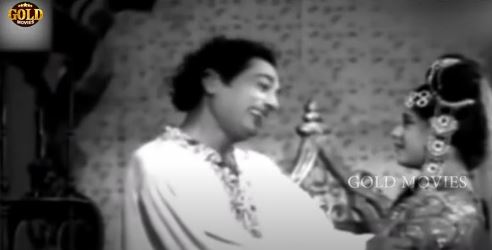 Now for those ten reasons you should watch this film.

1. If you’re an animal lover, it doesn’t get better than this. The lead female is helped by a horse, a dog and a snake! The snake can even open locks on prison doors (no, I’m not joking). And, the bonus: the dog revives its unconscious mistress by bringing a kettle full of water from a lake. The way the water is shown, coming in a steady stream from out of the frame, however makes it very possible that the dog was trying to revive Hunterwali by peeing on her face.

2. Talking of Hunterwali: the feminist in you will rejoice. This is a woman who beats up any goon who comes her way, bosses her boyfriend (if you can call him that) around, and still finds time to masquerade as the maalan and the bhoot (if you hadn’t figured out that these are not three different women but just one, I feel for you: you have much cinema-watching to catch up on). Plus, she does a lot of her fighting in high heels. Wonder Woman, eat crow.

3. Noor Mahal proves you don’t really need a script to be able to make a film. If you have an idea, or multiple ideas—children betrothed in childhood and meeting as adults + masked vigilante with animal friends + ghostly being haunting a ruin + comic sidekicks with romances of their own—you can, given a budget, fit them all in together. Not a logical fit or a fit that makes any sense, but a fit nevertheless.

4. You learn how to make do on a budget. Your dagger-thrower missed? No matter if you can’t afford a retake. You can’t find a stuntwoman (or one of Chitra’s build)? No matter; you get a stuntman, and rig him up with a fake bosom to play the part in long shots. And anyway, as is obvious from point #3 above, you don’t need a scriptwriter at all. Huge saving.

5. You learn crisis management. Let’s say you have this date lined up for the filming of a song (Nainon mein kajra masha-allah, if you want to know). Only two people will appear in it: Chitra and Jagdeep. But Jagdeep cannot make it, and there’s no way you can shift the date. So you film the song, with an odd leg, back, or otherwise unidentifiable body part of a male extra standing in for Jagdeep in some shots. To reinforce the illusion that Jagdeep is actually there, you add in the same stock reaction shot. Again and again. And the song is done and dusted.

6. You learn to be forgiving and broad-minded. So what if your scriptwriter can’t figure out a logical way to get your heroine (or hero, at various points in the story) free of the bonds the baddies have put on them. So what if your extras can’t act for nuts and, while pretending to be guards, pace about stony-faced and seemingly blind to the dog nibbling at the captive’s bonds, or the snake picking the lock, or the accomplice freeing the captive? You let it all pass. It’s all good, it doesn’t matter. Zen.

7. You learn to enjoy the little things in life. Like indulging in all your favourite tropes while making a film. You like the idea of a female donning several disguises for absolutely no reason, you go ahead and do it. You aren’t bothered by questions like “Why does Hunterwali dress up like a bhoot and sing sad songs? Why does she also dress up as a maalan, only to switch to being a bhoot? What is the logic, whom is she trying to fool, and why?” Such questions are meant to be brushed aside; the idea is to have fun, to enjoy yourself.

8. You understand the true essence of escapism. Indian cinema has long been equated with escapism. Too many films, though, in trying to stitch up all the plot holes and find logical solutions for problems, end up running circles around themselves. Noor Mahal shines bright as an example of escapism at its best: not bothering to let itself be fettered by considerations of logic and sense. If a willing suspension of disbelief is an essential part of escapism, this is the film that requires it the most.

9. You see the sad reality that is the film industry. On a less frivolous note, Noor Mahal shows just how difficult it is for people to find sustained work in the film industry. Jagdeep, Tiwari, and Sunder were all pretty well-established actors, having worked in some truly stellar films, including award-winning ones. But their very presence in Noor Mahal shows just what this dog-eat-dog industry can do to those who work in it. They are obliged to set aside other considerations just in order to earn enough to keep body and soul together. (That, sadly, is a learning also from the last Hindi film I reviewed, Dil Ne Phir Yaad Kiya).

10. You might be able to figure out what is really happening. Yes, this is my basic and most selfish reason for encouraging you to watch Noor Mahal. Perhaps, the more of us there are out there who see this film, the more clarity we’ll have on what really is happening in it. Why Hunterwali also dresses up as maalan and bhoot, who saved Radha’s beau and why is he pretending to be a halfwit, why Radha pretends to love Veer Singh, how Vijay chances upon Noor Mahal in the first place, etc etc.

Or not, as the case may be.

(By the way, Noor Mahal did do one more thing for me: it introduced me to Jani Babu Qawwal, who composed the music for this film. I hadn’t known that. Though the music was composed by him, it was arranged by Sonik-Omi).