Literally, Yellow Crow, though this poignant little film is also known in English as Behold Thy Son.

It’s been a long time since I reviewed a non-Indian, non-English language film. I have several bookmarked on Youtube, and after some trial and error (a couple of minutes of this, ten minutes of that) settled on this one. Kiiroi Karasu was directed by Gosho Heinosuke, the man who directed Japan’s first talkie (and who was, for a while, the President of the Directors’ Guild of Japan).

I began watching this film with few expectations. In fact, I didn’t even read a synopsis of the film, so I had no idea what I was getting into, not even what genre.

Kiiroi Karasu begins at a Buddhist shrine. In front of a massive monolithic Buddha sit a bunch of school children, sketching and colouring for all they’re worth. 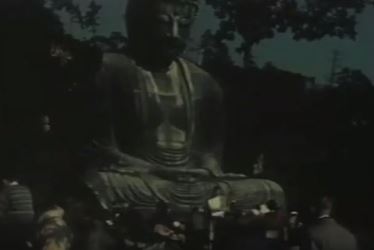