When I was a teenager, Dev Anand ranked way up on my list of favourites—right at the top, in fact, with Shammi Kapoor. This film, one of his earliest, stars him opposite his real life ladylove Suraiya, but other than some nice songs, is fairly forgettable. And yes, along with a callow Dev Anand, it also has a very young-looking (yet villainous) Madan Puri.

Chandrashekhar `Chandu’ is the son of a poor cobbler called Bhola, derided by just about everybody except a rich little girl called Vidya, and Vidya’s uncle, Ram Singh. Encouraged and helped by them, Chandu begins going to school, only to find himself ridiculed and ostracised by the rich folks’ kids—especially a boy called Harish. 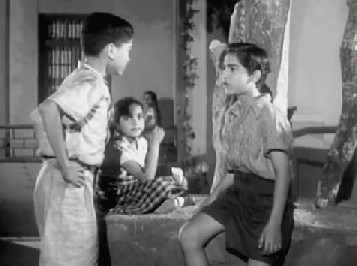 Vidya, meanwhile, lives in a very unhappy household: her father is a degenerate who spends most of the night drinking and whoring. Her mother (Amirbai Karnataki, one of the few character actors I recognised in this film) is irritatingly long-suffering and patient, even sitting up with her errant husband’s dinner for when he returns at 2 AM. Ugh! 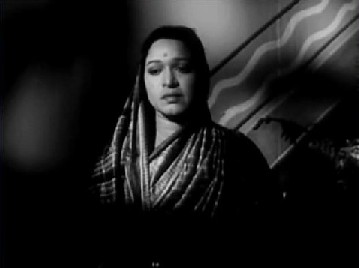 Vidya’s father is so nasty that one night, in a fit of rage, he throws his brother out of the house, leaving Ram Singh with only one option: to go to Bhola and seek his help. Bhola, ever grateful to Ram Singh for all his generosity, offers to do whatever he can—and Ram Singh asks for his help in setting up a model educational institution, to be called Vidya Bhawan. 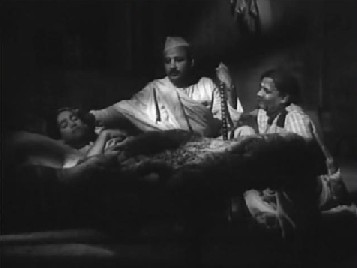 Years pass. Chandu (Dev Anand) and Vidya (Suraiya) are now grown up and very much in love.

They’re also the star students of Vidya Bhawan, although there’s a brief moment of anxiety when news spreads that Chandu’s failed his BA exams. This is largely a rumour set about by the evil Harish (Madan Puri), who wants to separate Vidya from Chandu. 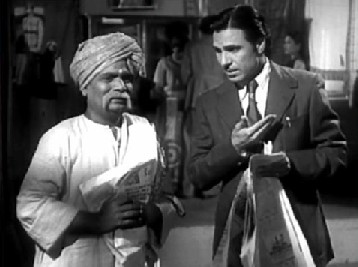 With a view to getting Chandu out of Vidya’s life, Harish hires a fashionable young woman called Leela (“Harish, it’s getting awfully late,” she says in a perfect English accent—the actress, I think, is Maya Banerjee). Leela is to get a job at Vidya Bhawan and do whatever she must to drive a wedge between Chandu and Vidya.

Leela manages to snag the job, and is shortly after sent off, along with Chandu, on a literacy mission, spreading education in an area called Bhawanipur. While there, under Chandu’s influence, she leaves off her vivid makeup, flashy saris and English accent (all obviously a no-no in an India where people greet each other by saying “Jai Hind!”) 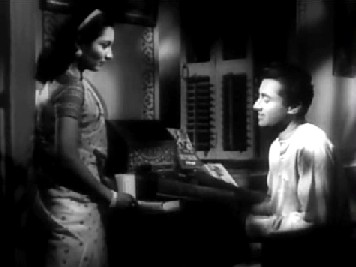 The inevitable happens: Leela falls in love with Chandu, and confesses it to him. But when he tells her he thinks of her only as a sister, she acquiesces readily enough, leaving the field clear for Vidya.
Our heroine, meanwhile, has been having a bad time too. She’s been coughing on and off, and now falls so ill that everybody more or less despairs of her…

…But Chandu’s return sets Vidya on the mend immediately, and when she’s right as rain, she decides it’s time to attend to the two villains of the piece: Harish and her father. Harish is an unmitigated scoundrel, and Vidya knows her father isn’t much better.

There isn’t much of a story to this movie: it’s more a disjointed set of episodes that somehow don’t form a coherent whole.

What I liked about this film:
Not very much, really—despite the fact that I usually like Dev Anand in his earlier (read 50’s and 60’s) films. I suppose this one was too early! He looks good, of course, but there should be other reasons for wanting to watch a movie, right?
The songs. Very good ones, a number of which can still be heard, 60 years later. If only they didn’t interrupt the story so much.

What I didn’t like:
This was a boring, self-righteous sort of film. It made much of Bharatiyata, of everything Western being inherently evil (well, not surprising, considering we’d just managed to chuck out the British after 200 odd years!)—but, seriously, this did go over the top. There wasn’t very much happening, except one song after another, and the welcome-mat attitude of Vidya’s mother got my goat.
All in all, the film could’ve done with more of a story and fewer songs.