I watched Guide for the first time when I was about twelve or so. Till then, all the Hindi cinema I had watched was predictable, comfortable, simple enough for a pre-teen to know what to expect. Or so I thought.

Because Guide defied every norm I thought I understood. Heroes, not even when they were the anti-hero Dev Anand had played in earlier films like Baazi, Kaala Bazaar or House No. 44, did not go anywhere near another man’s wife. Heroines, even when they were married off against their wishes to men other than those they loved (as in Dil Ek Mandir, Gumraah, or Sangam) stayed true to their marriage vows and sooner or later left their past behind (I was to watch Yeh Raaste Hain Pyaar Ke only much later). They absolutely did not leave their husbands and start living with another man.

Several years later, I had to study RK Narayan’s The Guide at school, and I pretty much knew what to expect—but once again, I found myself surprised, because the book was in many ways different from the film. The book had won its author the Sahitya Kala Akademi Award (the first book in English to win the award), and the film won accolades by the handful—and continues to do so, fifty-five years after it was released. It has been analyzed, discussed, derided, lauded. Personally, other than for its music and Waheeda Rehman’s dancing, I have never really liked Guide much—but even I, when offered the opportunity to read this collection of essays about Guide, couldn’t resist it. Partly, perhaps, because I hoped to be able to discover what fans of the film saw in it that I didn’t.

END_OF_DOCUMENT_TOKEN_TO_BE_REPLACED

In 1956, Waheeda Rehman made her debut in Hindi cinema in CID, with Dev Anand (Waheeda wasn’t the heroine of CID—Shakila was—but she had a good and somewhat offbeat role as the vamp with a heart of gold). Over the next decade and a half or so, Waheeda and Dev Anand were to go on to act together in several more films, probably their most famous pairing being in the hugely popular Guide (1965).

I have watched, as far as I know, all of the Waheeda-Dev films over the years. The only one that (again, as far as I know) I hadn’t watched yet was this one. Time, I decided, to make amends for that.

As in many other films of his, Dev Anand in Roop ki Rani Choron ka Raja is a crook—a thief, to be precise. We are introduced to Chhagan (Dev) when he’s in a shady-looking dive, buying a bottle of booze. Shortly after, Chhagan is accosted by ‘Langad Deen’, a partly-crippled character (played by Jeevan), who has a bit of news for Chhagan: a steamer is about to begin the journey down the river to the pilgrimage spot of Shivsagar. Langad Deen has it on authority that among the people on board is a wealthy jeweller who is carrying a very valuable diamond to be offered up to the god Shiv at Shivsagar.

END_OF_DOCUMENT_TOKEN_TO_BE_REPLACED

In 1960, RK Narayan won the Sahitya Akademi Award for his novel, The Guide, published in 1958. The story is of a small town tourist guide who has an affair with the lonely wife of an archaeologist, an affair that has a lasting impact on his life.

Of course, anybody who knows anything about Hindi cinema would recognize the plot (and the name) immediately: this, after all, was (minus the ‘The’) the name of one of Hindi cinema’s most popular films ever made. The Dev Anand-Waheeda Rehman starrer Guide, directed by Vijay Anand, won an impressive seven Filmfare Awards (and that excluding what should definitely have been an award, for SD Burman’s brilliant score for the film).

END_OF_DOCUMENT_TOKEN_TO_BE_REPLACED

When you are as devoted to the pursuit of old Hindi cinema as I am—and you assiduously discuss old cinema with other like-minded souls—you keep getting recommendations. Some recommendations I take with a certain amount of leeway automatically assigned, since I know that the recommender has his or her own biases that are likely to be reflected in the film in question. Others I tend to blindly follow, because over time, I’ve realized that these are people who pretty much share my own ideas of what comprises watchable cinema.

One of these is Anu, who blogs at Conversations over Chai. We have our differences (Raj Kapoor is one), but by and large, Anu and I tend to agree about cinema. So when Anu, chatting with me during my trip in August to meet her, recommended Tamasha, I immediately made a note of it. After all, Dev Anand, Meena Kumari, Ashok Kumar, Kishore Kumar—and a comedy? That certainly sounded like something I wanted to watch.

END_OF_DOCUMENT_TOKEN_TO_BE_REPLACED

I started off being a diehard fan of Dev Anand’s. While in school and college, pretty much all of Dev Anand’s films I’d seen were the ones Doordarshan aired: CID, Teen Deviyaan, Tere Ghar ke Saamne, Jewel Thief, Nau Do Gyarah, Munimji… what wasn’t to like? Yes, I drew the line at Dev Anand post the early 70s—those mannerisms by then had begun to be tiresome, and the man’s ‘evergreen’ image really didn’t fool me. It was downright embarrassing to watch films like Warrant or Heera Panna.

And then, when I was in my twenties or so, I began paying a little more attention to Dev Anand’s early career—and found that here was a mix of films, some good and some pretty forgettable except for some good music. After trying out films like Vidya and Sazaa, I sort of gave up. Until Sanam was recommended to me by someone who knows his Dev Anand movies inside-out. A comedy, surprisingly modern, I was told. 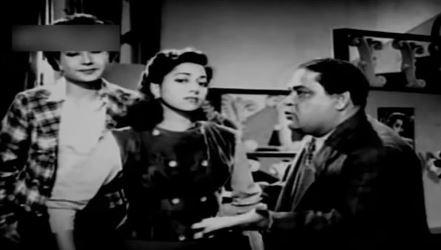 END_OF_DOCUMENT_TOKEN_TO_BE_REPLACED

Earlier this year, commenting on a post, reader Shalini recommended Ferry to me. I admitted that I’d seen the film—years ago—on Doordarshan, and had liked it, though over the intervening years I’d forgotten what exactly it was all about. I did remember this much: that it featured a child, and that it was very different from the usual (mainly romantic or noir) films of Dev Anand that I’d seen till then. I decided it was time for a rewatch. 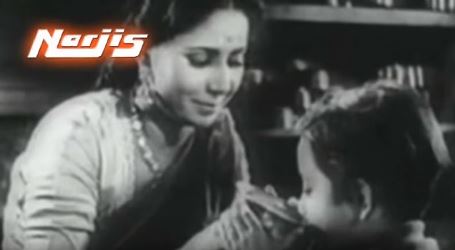 END_OF_DOCUMENT_TOKEN_TO_BE_REPLACED

Nasir Hussain, as someone (he himself?) once remarked, came to Bombay with one story in his briefcase, and made out of it one blockbuster after another. The story of a son, separated by circumstances from one parent and going through various ups and downs (including falling for the distant parent’s foster offspring, being impersonated by a crook, etc) before the happy ending, was one that was played out in Tumsa Nahin Dekha, Dil Deke Dekho, Phir Wohi Dil Laaya and Pyaar ka Mausam.

But, contrary to popular belief, Nasir Hussain was by no means a one-trick pony. He had other plot elements up his sleeve as well, and they appear now and then sporadically in various films. The ‘couple promised to each other as children’ trope is one [which always ends up with the couple—completely unaware of having been ‘betrothed’ in childhood, even sight unseen—falling in love with each other]. Another was the hero being [mistakenly, of course] believed to have killed a sister [or sister figure] of the heroine’s, after having played fast and loose with her—this, naturally, causing serious heartache and betrayal for the heroine until she realizes that her beloved couldn’t possibly do something so heinous. 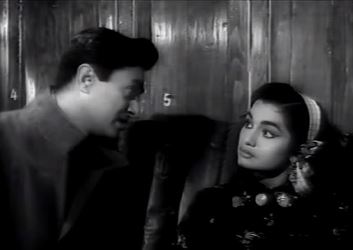 END_OF_DOCUMENT_TOKEN_TO_BE_REPLACED

Anu had started this month with a Dev Anand film—and I, following suit, decided I would review a relatively little-known Dev Anand film too, to begin August. But, while Anu’s kept up the Dev Anand theme all through August, I’ve meandered off in different directions, all the way from The Rickshaw Man to jeep songs. But solidarity among friends counts for something, doesn’t it? So here I am back again, with another Dev Anand film. The sort of film that, on the surface, looks like it’s got everything going for it: a suave Dev Anand opposite a very beautiful Waheeda Rehman (who, along with Nutan, was, I feel, one of Dev Anand’s best co-stars as far as chemistry is concerned). SD Burman’s music. Suspense. Some good cinematography.

END_OF_DOCUMENT_TOKEN_TO_BE_REPLACED

I had no particular film review or song list in mind for this week, but when Anu declared August Dev Anand month over at her blog, and Harini reviewed Duniya, I saw a bandwagon that I liked—and decided to jump on to it. With a film that reminds me of Duniya in some ways: Dev Anand, late 60s, suspense.

END_OF_DOCUMENT_TOKEN_TO_BE_REPLACED

One day in August, I checked my blog roll and discovered that not one, but two, of my favourite bloggers had posted reviews of films based (even if only in spirit) on The Arabian Nights. Anu had reviewed Ali Baba aur 40 Chor, and Ira (aka Bollyviewer) had reviewed The Thief of Baghdad. Coincidence? Planned? If the latter, then why hadn’t I, the third of the three soul sisters, been included in the plan?
It turned out to have been sheer coincidence, but Anu, Ira and I decided it would be a good idea to actually do a themed set of posts. And what better theme than the one Ira suggested: long-lost siblings, such a favourite trope in Hindi cinema.

So here goes. Head over to Anu’s blog to read her review of the delightful Yaadon ki Baaraat (singularly appropriate, considering the link between Anu and me) and to Ira’s blog to read her take on another extremely popular (and superb!) lost-and-found-siblings film, Seeta aur Geeta. And here, of course, is mine: a review of a film which just manages to make the cut for my blog when it comes to time period. A classic story of long-separated brothers who grow up, unknown to each other, on opposite sides of the law. 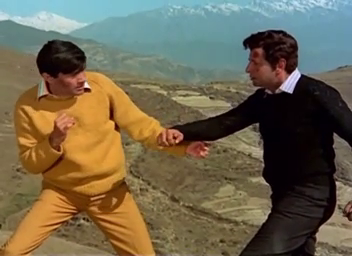