I watched this film because it stars Shammi Kapoor. Also, perhaps, because the cast had Kumkum in it—a very good dancer and a not-bad actress, and sadly underrated. Some of the songs I’d heard were hummable. And Mala Sinha (even though she’s beginning to pall on me after a series of awful Mala Sinha-starrers I’ve seen recently) is still bearable. I thought I could deal with Raj Kumar.
What I hadn’t bargained for was an erratic screenplay, some awful acting, and much irritating shrieking and sobbing on the part of Leela Chitnis. But Shammi Kapoor keeps me going through it all.

The story, now. It’s about Ramu (Shammi Kapoor), who’s piss-poor (you wouldn’t know it to look at him) and plies a cart, towing cargo to and fro. He has a whimpery, overwrought mother (Leela Chitnis) and a brood of very tiny siblings—the only one who’s anywhere near Ramu’s age is Sandhya (Ratna). Ramu, though poor, is ever-cheerful and very generous. 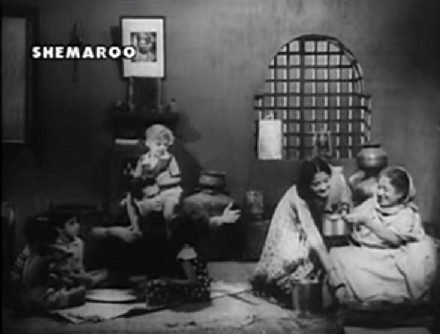 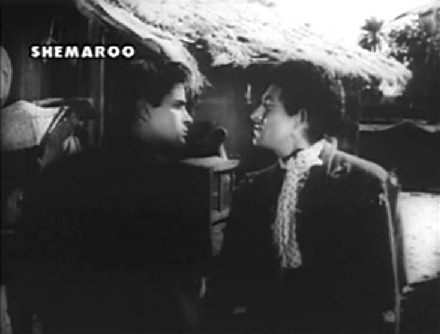 One day, however, tragedy strikes. Ramu’s little sister Munni is badly injured in a car accident, and Ramu doesn’t have the money to pay for an operation. He refuses Kalu’s offer of `tainted’ money, and goes off to beg his landlord for a loan—which the man agrees to, provided Sandhya marries him. Horrified, Ramu runs off, back to his family, to find Munni dead. Ramu doesn’t even have the money to buy wood to get Munni cremated, and ends up giving his wooden cart to the man at the cremation ground, to use as a pyre.

Ramu’s thoroughly disillusioned by now, and goes off to throw in his lot with Kalu and his hoodlums: Bholu (Dhumal) is the main goon. Ramu also meets Kalu’s girlfriend, the lovely Kammo (Kumkum: she’s introduced in a nice song, Tera jalwa jisne dekha woh tera ho gaya). Kalu appears a little disenchanted with his life; he spews some half-baked philosophy about how he doesn’t like what he’s doing, etc—but this doesn’t really lead anywhere in the film.

With the advance Kalu’s bestowed on him, Ramu goes off to buy a bracelet for his girlfriend, a milkmaid called Chhabeeli (Mala Sinha). She’s a silly creature, lisping “Ram kasam!” after every two words, but Ramu doesn’t seem to mind.

One rainy evening, Kalu has an altercation with Chandu, a gang member. Chandu’s pocketed part of the loot to buy a trinket for his girl; a disapproving Kalu slaps him in front of everybody. Chandu’s livid, but backs down for the time being while Kalu gathers his gang and goes off to pick the pocket of a wealthy man emerging from a cinema hall. 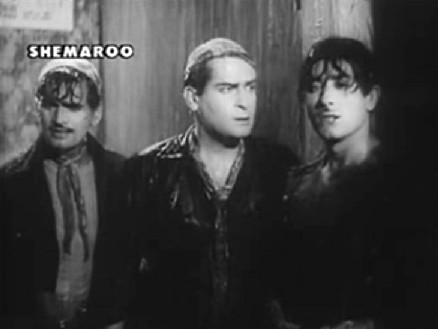 Chandu, smarting for revenge, informs the police, and they arrest Kalu and Bholu. Ramu escapes by the skin of his teeth, and heads home. Chhabeeli meets him and pleads with him to leave Kalu’s gang. This scene—with the last drops of the rain still dripping, Chhabeeli clinging to Ramu—is one of the few that are poignant. Much more so than all the shrieking of Ramu’s mother. She has lately been indulging in rather a lot of this, by the way—because the landlord has been pestering them for the last four months’ rent, which amounts to Rs 14.

Chhabeeli’s words have an effect on Ramu. The next day, he heads for the railway station and works as a coolie all day long. By the end of the day, he’s only accumulated Rs 4. He then goes to Kalu to borrow Rs 10, and to tell Kalu that he’s getting out of the gang. Kalu promises Ramu the money, if Ramu will only come with him on one last job. He needs Chandu for the job too, so he tells Ramu to go fetch Chandu. 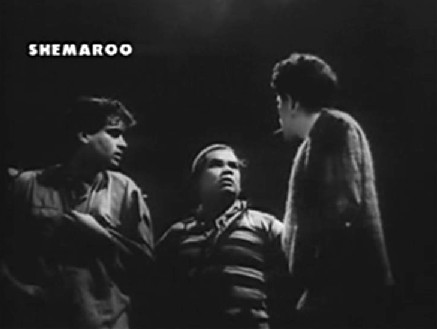 When Chandu arrives, he has a fight with Kalu and gets killed. Kalu—a persuasive guy—convinces Ramu that since Ramu was the one who’d gone to fetch Chandu, everybody will think Ramu killed Chandu. Ramu should keep mum about this, and hope and pray the police won’t find out. Ramu is scared enough (or plain dumb; I don’t know) to believe Kalu.

Chhabeeli, who seems to have a considerable fan following, introduces Ramu to the owner of a knife-making factory. She bullies the man into giving Ramu a job. Ramu begins work, and his sincerity and hard work soon impress the owner.

In the meantime, Ramu’s mother and Chhabeeli (she’s a nosey parker, this one) have been busy trying to fix up Sandhya’s marriage. They find her a suitable groom (personally, I think he’s an idiot—Chhabeeli in fact says it to his face), and the engagement is fixed for after a month. Ramu asks his boss if he can draw his wages, of Rs 100, on that day. The boss is amenable, and everything is tickety-boo.
But on D-Day, while the owner and everybody else is out of the factory and Ramu is holding the fort, Kalu happens by. And, being the nasty creature he is, he pinches a carved silver knife and makes off with it, leaving Ramu to shoulder the blame. 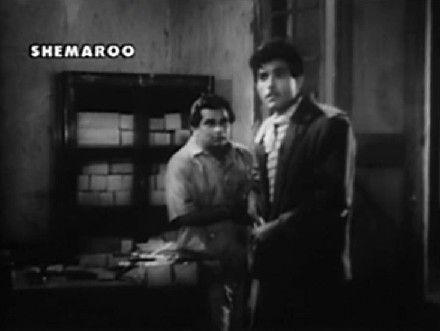 How much worse can it get? Will Ramu ever emerge from the darkness into which he’s been unwittingly shoved? Will anybody believe that he’s actually a good man?

What I liked about this film:
Shammi Kapoor. Oh, so gorgeous.
The music, by Shankar-Jaikishan. It includes the popular Yaalla yaalla dil le gayi and the folksy Ho mora naadaan baalma na jaane ji ki baat.

What I didn’t like:
“Every time I’ve tried to be a good man, you’ve pushed me into the depths of darkness,” Ramu tells Kalu later in the film. A good starting point for a story, and something I’d liked to have seen handled better, but Ujala makes a mess of it. A poor man blunders into the underworld before realising it’s not worth it: Raj Kapoor’s Shree 420 had a similar theme, but far surpassed this. That was a simple story, well told and with few distractions. This one is a complicated tale, with too much happening that never actually led anywhere. It drags in places, rushes through others, and doesn’t quite manage to get any sort of message across. I can accept that, but it doesn’t even entertain (which in my lexicon, is bad).
The characters are badly done: Kalu, for instance, seems interesting at first glance, a man with many layers. This, however, isn’t developed at all. He simply disintegrates into just another thug. Ramu’s mother is another case in point: she fawns over Ramu one minute, wishes he hadn’t been born the next. Ramu says she gave birth to him, but never understood him. Well, I don’t much understand her.
Kumkum. Why on earth have someone as lovely and effervescent as Kumkum, if all she had to do was two dances? A waste.

Nah. Drool over Shammi Kapoor in Dil Deke Dekho or Tumsa Nahin Dekha; watch the songs of Ujala on youtube. But give the film a miss. Not worth it.