I tend to associate Hrishikesh Mukherjee with films that focus on the everyday lives of people like you and me (I’m assuming here that you aren’t a multimillionaire, a film star or something equally glamorous; I’m not, at any rate). Anupama, Anuradha, Anand, Satyakam—all of them amazing films whose protagonists are very real. Asli-Naqli is perhaps a little different, because it begins in the world of the spoilt young heir of a very rich man. 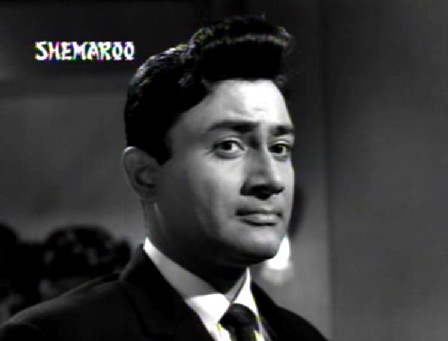 Anand (Dev Anand) is the grandson, heir and only living relative of starchy old millionaire Dwarkadas (Nasir Hussain). Anand is the sort who only comes to office to ask his grandfather for more money—which he blows up on the racetrack, at bars, or at nightclubs. Anand, we realise within the first couple of scenes, isn’t a bad guy, just thoroughly irresponsible and out to have a good time.
Dwarkadas, however, has plans to put a stop to Anand’s revelry: he’s arranged a marriage between Anand and Rekha (Indira), the silly daughter of a sugar baron. 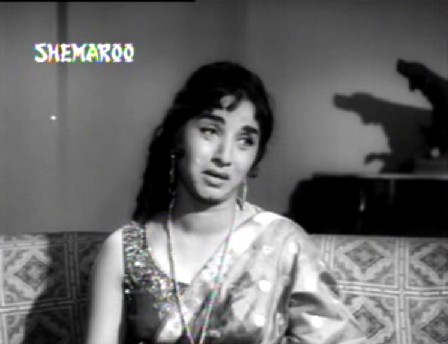 Anand avoids Rekha like the plague. This eventually cheeses off Dwarkadas (as does Anand’s ceaseless carousing), and we have the inevitable showdown. Dwarkadas accuses Anand of being a worthless good for nothing; Anand hits back by saying he’s this way because grandpa brought him up this way. Touché.
The long and the short of it is that Anand leaves the house in a huff and wanders away onto the streets. 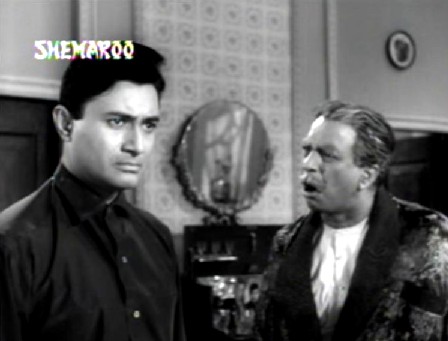 Some hours later, Anand (who’s been snoozing on a park bench) is hauled up by a cop for vagrancy. A passerby called Mohan (Anwar Hussain) comes to Anand’s rescue, and discovering that Anand is homeless, jobless and hungry, takes Anand to his own home. Mohan’s younger sister Shanti (Sandhya Roy), very sharp-tongued but good at heart, ends up `adopting’ Anand as her brother. 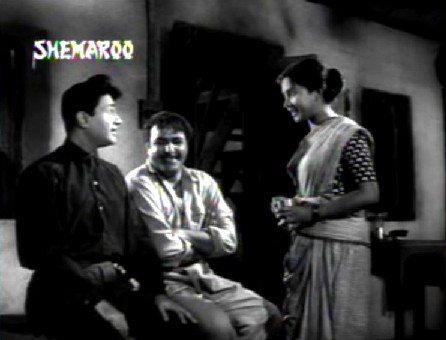 Anand soon makes friends with Mohan’s neighbour Nandu (Mukri), and the others in the neighbourhood. He also meets the lovely Renu (Sadhana), who comes by every evening to teach the poor people basic English, mathematics and so on. Anand teases Renu by pretending to be illiterate, and gets her quite annoyed. 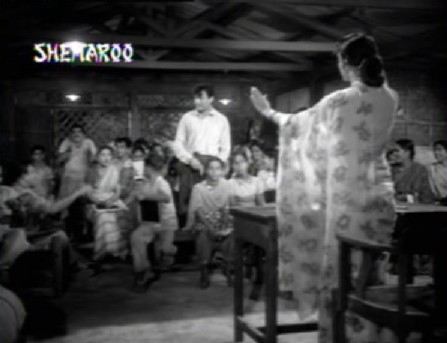 Anand has been spending most of his days searching for a job. The day after he meets Renu, he runs into her again, this time at the office of a textile manufacturing company where he’s come looking for a job. The manager (Hari Shivdasani) and his assistant Mr Gomes (Keshto Mukherjee) mistake Anand for the Mr Anand, an important client they’re expecting. Anand is being plied with cigarettes and coffee when Renu—secretary to the manager—walks in and recognises Anand. 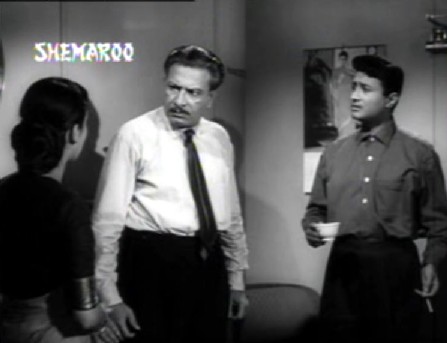 Anand gets kicked out, but he tells Renu the truth: that he’s a graduate, needs a job desperately, and had been looking for a job. Renu is suitably remorseful. The real Mr Anand has arrived in the meantime, and has awarded the company a valuable contract. Renu goes to her boss, the manager, and convinces him that this contract’s come their way because of Anand: he’s a mascot, a good luck charm, and shouldn’t they give him the job he sorely needs? 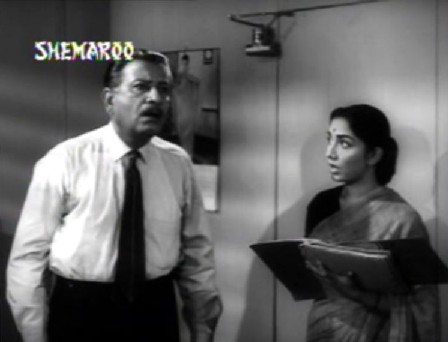 The manager’s mollified and agrees, but the only job available is that of a stenographer, someone who knows shorthand and typing. Egged on by Renu, Anand agrees, and the job is his. Renu helps cover up for him by doing his work while she makes him practise typing. In the evenings, they meet at Renu’s classes in Mohan’s neighbourhood. And (what else should one expect?), they fall in love. 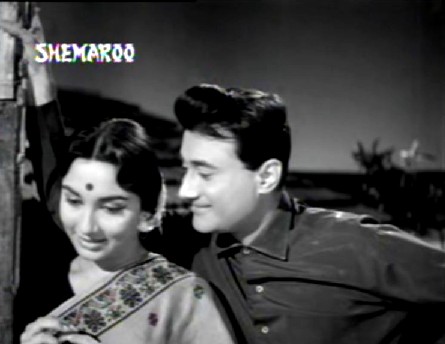 But something strange is happening in Renu’s life. When she gets home from office, she drops a letter into the letterbox outside her home. Her mother (Leela Chitnis) asks Renu how her day at college was, and then bemoans the fact that Renu’s father hasn’t written to them in a while. Renu sends her little sister off to the letterbox to retrieve the letter, which she reads out. It purports to be from her father, and says that he’ll come home once his work is over.
Something fishy here. 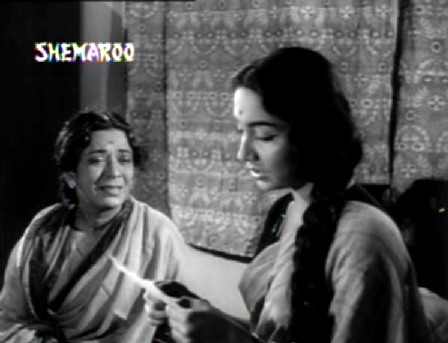 Meanwhile, the boss discovers Anand can’t take dictation or type for nuts, and Anand’s fired. He plods around town looking in vain for a job, and even tries walking out of Mohan and Shanti’s home when he finds Shanti selling off her jewellery to buy food for them. But Mohan and Shanti won’t let him go (“We’ll share our sorrows and our poverty”), and Anand is very touched by their selflessness. 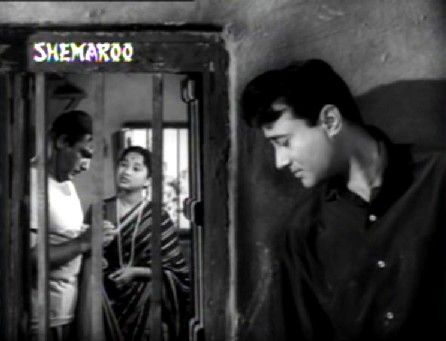 He tries to pass on the benevolence, but it misfires. On a train, trying to slip some money into the purse of a poor old woman who’s been caught travelling without a ticket, Anand himself is pounced upon—everybody thinks he was robbing the old woman. Renu comes to bail him out; the old woman reveals the truth and gets Anand acquitted. 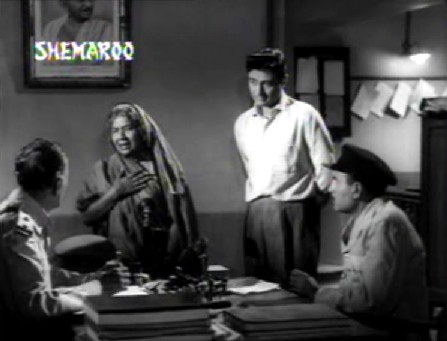 Renu now tells Anand her story. It turns out that Renu had an elder brother, for whom her parents had great ambitions. To provide money for an expensive education for his son, Renu’s father went away to Africa to work.
Three years back, says Renu, her brother suddenly fell ill and died. Renu’s father took the next flight home—and died in a plane crash. Renu, whose mother went into shock at her son’s death, was told by the doctor that the trauma of being widowed would be too much for her mother. Therefore the pretence that Renu’s father is still alive and well, and periodically sending them money. 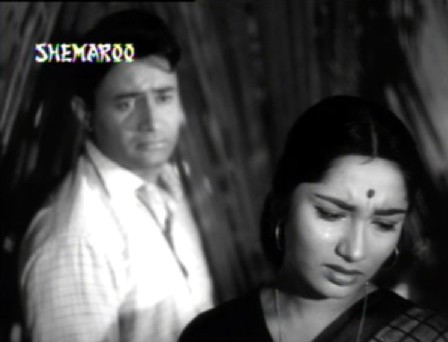 With that off her chest, Renu drifts even closer to Anand. And there’s more good news around the corner: Nandu has managed to find Anand another job, this time as the driver of a school bus.
But can the good times last? How long can the truth be hidden—by Renu, about her father; and by Anand, about who he actually is? What’s Dwarkadas doing all this while? And how will Mohan, Shanti, Nandu and all the other people who’ve taken Anand into their homes and their hearts react when they discover who he is?

What I liked about this film:
The music, by Shankar-Jaikishan. My favourite is Tujhe jeevan ki dor se baandh liya hai, but there are plenty of other lovely tunes as well: Gori zara hans de tu is particularly sweet.
Sadhana, one of my favourites. She’s excellent in this film: very pretty in a wholesome, girl-next-door way, and a good actress to boot. 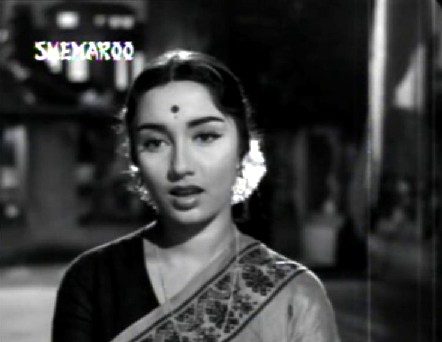 Sandhya Roy: I last saw her in the awful Pooja ke Phool, and wasn’t expecting much from her in Asli-Naqli, but she does a very likeable Shanti, sharp-tongued and brusque, but also sensitive and sweet.
And Dev Anand, of course. Like Shammi Kapoor, he’s an actor whose 50’s and 60’s films I can generally depend upon for good entertainment value—and he delivers in this one.

What I didn’t like:
The character of Anand was puzzling. This man, when he’s staying with Mohan and Shanti, is dependent on them for his every meal until he finds a job—and then he doesn’t make much of an effort to retain the job. When he loses the job, Anand doesn’t seem too perturbed—and when he finally gets another job: well, it’s the same story all over again.
On the one hand, Anand’s rejecting all his wealth; on the other, he’s doing precious little to earn a living for himself. Why? An unsolved mystery, which left me feeling vaguely irritated.

Not one of Hrishikesh Mukherjee’s very best films, but yes, watchable enough. It lacks the subtle insights into human nature that you’ll find in films like Anupama or Anuradha, but it’s a pleasant, simple tale—and as I said, the songs are worth it.