Looking through my blog archives, I realised that the last Hitchcock film I reviewed, Dial M for Murder, was way back in November 2008. For someone who’s a self-confessed Hitchcock fanatic, this amounts to blasphemy. Service recovery seemed in order.
May I present, therefore, one of my favourite Hitch films: The Trouble with Harry. In true Hitchcock style, it’s full of suspense—but a suspense that’s quirky in the extreme. This is dark humour: farcical, irreverent, and very funny. No, not typical Hitchcock, but one of his best works.

It all begins on a cloudy morning in a small New England town. Little Arnie (Jerry Mathers) is off prowling the woods (and what glorious woods: all orange, gold and picture-postcard pretty!) with his toy gun. Arnie hears a shot fired, and goes off to investigate—only to find something that doesn’t quite fit in with the tranquillity of the woods.

Arnie promptly turns tail and runs off. He’s barely disappeared when another wanderer comes along with a shotgun under his arm. This is Captain Wiles (Edmund Gwenn), a retired tugboat captain who spends his time taking pot shots at the rabbits in the woods.

Wiles has fired three shots this morning. He finds one bullet hole through an old beer can. Another bullet’s knocked off the “No trespassing and no poaching” sign. Before he can find the third bullet hole, Wiles finds this:

Oh, dear Lord. This is most uncomfortable. Wiles hasn’t a clue who this dead stranger is, but the trickle of blood down one temple is a clear indication of what happened to that third bullet.
Wiles does a little searching and finds an envelope addressed to a Harry Warp in the corpse’s breast pocket. Not that this makes much of a difference to Wiles; Harry, as far as Wiles is concerned, is still a dead stranger, who’s best off quietly (and quickly) concealed. So Wiles begins to drag him off into the undergrowth, preparatory to interring him… and is interrupted by another arrival.

Miss Gravely (Midred Natwick) is admirably matter-of-fact about the entire business. She prods Harry with her shoe, admits that he appears quite dead, and when Wiles begs her to keep his secret, promises to do so. She will not tell the police.
Miss Gravely invites Wiles to join her for blueberry muffins and coffee that afternoon. He accepts, and she goes off, leaving him to dispose of Harry. 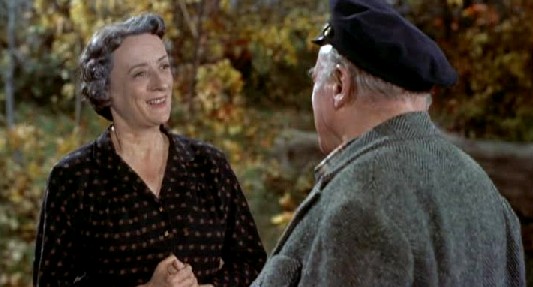 Wiles has just grabbed Harry by the ankles when Arnie’s back, this time with his mother Jennifer Rogers (Shirley MacLaine, in her debut role). Wiles dives into the bushes, and Jennifer comes to take a peek at the corpse. She recognises Harry, but doesn’t say who he was, and fervently thanks a friendly providence for taking Harry off the face of the earth.

Once Jennifer’s left with Arnie, Wiles emerges. Glad that Jennifer doesn’t seem to care what happens to Harry, he’s getting ready to continue—but there’s more traffic coming. The woolly-headed local sawbones, Dr Greenbow (Dwight Marfield) is up next, but he simply stumbles over Harry’s feet, begs the corpse’s pardon, and goes on.

Next up is a tramp, who happily swipes Harry’s shoes, leaving the dead man in a pair of rather natty blue and red socks.

By now, Wiles has dozed off, and the scene shifts to town, to the tiny general goods store run by Mrs Wiggs (Mildred Dunnock). She also stocks the avant garde paintings churned out by local artist Sam Marlowe (John Forsythe), but hasn’t been able to sell any so far. Sam isn’t really despondent, though. Nobody in this film is, no matter what—which is what I adore about it: they’re all so charmingly nonchalant!

Eventually, having chatted a bit with Mrs Wiggs, her son Calvin (Royal Dano) who’s also the deputy sheriff of the town, and Miss Gravely, Marlowe takes himself off into the woods to draw. And, this being the film it is, he ends up discovering Harry.
Harry acts as inspiration for Marlowe, who pulls out his chalk etc and does a swift sketch of the dead man. While Marlowe’s hard at work, Wiles wakes up, and comes over. 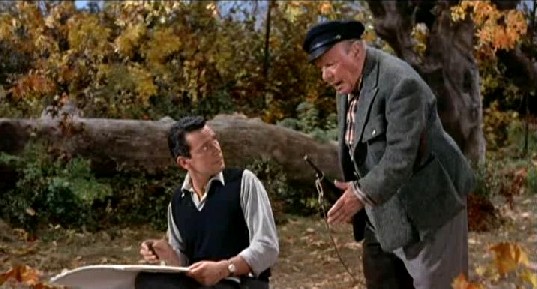 Wiles tells Marlowe all, and after much discussion, they decide to tuck Harry into the undergrowth for the time being. Meanwhile, Marlowe will go off to meet Jennifer Rogers (whom he’s never met before) to find out what she knows about Harry. And Wiles will keep his date with Miss Gravely. 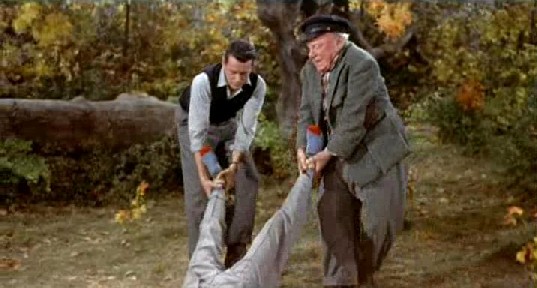 Jennifer bowls Marlowe over completely; he’s quite smitten with her. She’s disarmingly frank too, telling Marlowe that Harry was her husband. It turns out Harry’s younger brother had been Jennifer’s first husband; when he died, leaving Jennifer pregnant, Harry decided it was the noble thing to marry Jennifer himself. Jennifer discovered, on the wedding night itself (when Harry never turned up) that he was “horribly good”, and so she left him.
Jennifer tells Marlowe that Harry has been pursuing her, trying to get her to come back. This very morning, he’d turned up and Jennifer had whacked him on the head with a milk bottle and sent him on his way.

Meanwhile, Arnie’s found a dead rabbit in the woods. Guessing this is Wiles’s handiwork, he goes off to hand it over to the captain.
Later in the afternoon, Wiles and Marlowe, shovels in hand, go up into the woods, find a nice spot (“facing west, so that Harry can watch the setting sun”) and bury Harry. It’s hard work, but they finally get him in, and while they’re taking a well-deserved rest, Wiles mentions the dead rabbit. And then it strikes them: if Wiles’s third bullet hit the rabbit, it couldn’t have hit Harry.

Wiles insists on digging up Harry, and though they’re both grimy and sweaty by now, Marlowe obliges. Harry is unearthed—and Marlowe discovers that the wound on Harry’s forehead isn’t the result of a bullet. A blunt instrument did it.

So who killed Harry? Why? How? And this is just the start of it all…

Don’t miss this one: it’s a masterpiece.

What I liked about this film:
Oh, every single thing, but especially the story. It’s a smasher of a plot, with brilliant twists and turns that are in stark contrast to the serenity of the setting.
And the setting is gorgeous: New England in all the grandeur of fall. The leaves are the most exquisite shades of gold, orange and red, and the rest of it—the pretty little houses, the covered bridge, the meadows—is equally dazzling.

What I didn’t like:
Dr Greenbow is a little too irritating and hard to believe as he stumbles about the mountainside. This man actually trips over Harry three times before he realises this is a corpse cluttering up the place. Even given that Greenbow’s myopic and scatterbrained, this is a bit much.

Little bit of trivia:
Hitchcock filmed The Trouble with Harry in Vermont. They managed to get in a few good shots of fall foliage, before a storm blew all the leaves off the trees. Hitchcock then got loads of leaves packed into large boxes and shipped to the Paramount studios in Los Angeles, where the leaves were painstakingly pinned and pasted to trees on a set and sprayed over with paint to replicate the Vermont woods. The area where most of the action concerning Harry takes place, with the log and the undergrowth, is part of these fake woods (you can tell, actually: it does look like a set).