A very frank admission: I am not intellectual. I cannot summon up the brainpower to analyse a film and go deep into the philosophy of it—which is why arty films are completely lost on me. I never, after seeing a film, question it, delve into its profundities, or explore the hidden meaning of so and so scene.

I am therefore proud to announce that I have finally seen a film that has gone a long way in remedying this lamentable situation. Ek Phool Do Maali made me sit up and think. It made me ask a lot of questions. And it made me vow never to assume that just because a film had a cast I generally liked, meant that the film would be good too.

The film begins with bad news: a doctor emerges from an operation theatre to tell an anxious Kailashnath (Balraj Sahni, wearing heavy makeup and what looks like a wig) that Kailashnath’s wife has died in childbirth, along with the baby. Kailashnath faints with the shock and falls down two flights of stairs, as result of which he becomes impotent. (Or sterile, it’s not very clear. The doctor starts off by saying Kailashnath can never be a husband; then he changes it to “can never be a father”. Question#1: Isn’t there a difference? Or have I got my knowledge of male physiology wrong?)

Seven years pass. Kailashnath has moved to a village called Pawangiri high in the Himalayas. Here, he’s set up a mountaineering institute and has vast apple orchards. One of the students at the institute has come all the way from Africa. His name’s Amar (Sanjay Khan), and he soon has a run-in with a village girl called Somna (Sadhana). Somna and her mother (Durga Khote) live on Kailashnath’s estate and tend to his orchards.

Somna and Amar bicker childishly (Question#2: Why does this pre-empt falling in love? Okay, not a Ek Phool Do Maali specific question, but still). Meanwhile, Somna has also been getting her share of unwanted attention from a local thug and smuggler, Shamsher Singh (Shyam Kumar).

After much idiocy (and lawbreaking: Amar steals apples from Kailashnath’s orchard to get Somna into trouble; she breaks into his room and tries to make off with all his belongings), the inevitable happens: Somna and Amar confess their love for each other. (Question#3: Whose bright idea was it to stick patently fake flowers in the ground in this scene?)

While these two are billing and cooing, Kailashnath has been ruing the fact that he can never be a father. He confides in his friend and doctor (David), who suggests that Kailashnath adopt a child. Kailashnath refuses; it won’t be the same.
To make matters worse, two beggars—an old man and a girl—come by, singing a morbid song urging those `blessed’ with children to give generously to the poor. This cheeses Kailashnath off no end. 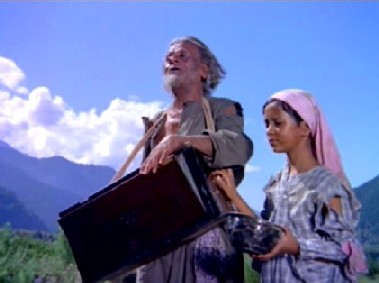 [Aside: There’s a rather extended comic side plot involving the doctor, his wife (Manorama), their daughter Shobha (Shabnam) and Shobha’s ineligible boyfriend, Bahadur (Brahmachari), who’s a shopkeeper. It’s all rather irritating and serves only to detract from the main story].

But back to the plot. Kailashnath has figured out that Amar and Somna are in love, and urges Somna’s mother to agree to the match, which she does. A song (Sajna, sajna, o sajna, tere pyaar mein main gayi kho sajna) follows, with Somna cavorting about in a deep orange and uncharacteristically skimpy outfit. Just as the song ends, it starts raining hard. Amar and Somna run for shelter into a cave. You can guess what happens next.

Far away, in Africa, Amar’s parents (Brahm Bhardwaj and Praveen Paul) are gushing over Somna’s photo and making plans for the wedding. (Question#4: Why Africa? The only indication that they’re in Africa is an African maid doing the dusting in the background. If Amar had to have a home far away, peninsular India is distant enough from the Himalayas). 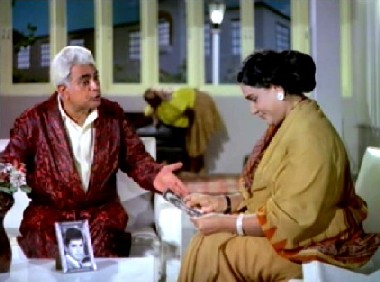 …And Amar is leading a mountaineering expedition to some unnamed peak. He bids Somna a fond farewell, and promises they’ll get married once he’s back—by then, his parents will have arrived too. 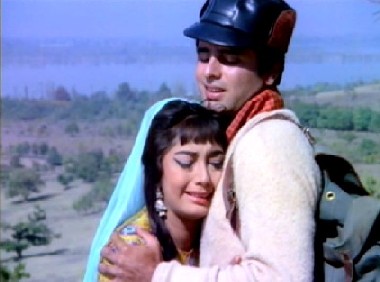 With Amar temporarily out of the picture, Shamsher Singh kidnaps Somna and tries to rape her, but is thwarted by Kailashnath, who turns up just in time. Shamsher Singh is tried and sentenced to six years’ imprisonment. As he’s led away, surrounded by policemen, he pauses to cock an eyebrow at Kailashnath and make a distinctly threatening remark hinting at revenge. (Question#5: Why don’t the police react to this? Or do they just think he’s cracking a joke, ha-ha?)

Amar and his gang are up on the mountain, making progress. (Question#6: Why have they pitched their tents on snow when there’s bare earth just a couple of feet away?)

Far downhill, Somna is sitting in the doctor’s clinic. She overhears the doctor discussing a young woman’s symptoms and then congratulating the woman on being pregnant. Somna realises with dismay that her symptoms are the same as the other woman’s, so she must be pregnant too. (Question#7: How can a doctor, on the basis of whether a woman feels nauseous and wants to suck limes, diagnose pregnancy with such confidence? Aren’t tests in order? And how about patient privacy? The doctor’s waiting room and his office are the same room).

And then disaster strikes in the form of an avalanche. Amar is among four mountaineers who are buried under the snow. Somna is devastated and tries to commit suicide, but Kailashnath asks her to marry him instead. He promises that their marriage will only be in name; he will give her and her child the protection of his name but will not demand any euphemistic `rights’. Somna finally agrees, and they are married.

Sometime later, Somna’s mother receives a telegram addressed to Somna. It’s from Amar! He didn’t die (well, obviously), and is now recuperating in a hospital. The old woman takes a unilateral decision to protect Somna’s marriage, and goes off to tell Amar that Somna died after hearing that he had died. Amar is so shocked and unhappy, he goes away to Africa.

Somna has a baby, and Kailashnath begins to dote on the kid. He thinks of it as his son, his heir.

Six years pass. Somna’s child, Bobby (Bobby, billed as `the wonder child’, for reasons I haven’t begun to fathom) is the apple of Kailashnath’s eye. The beggars are back again, and Kailashnath is more kindly disposed towards them. (Question#8: How come in six years the beggar girl hasn’t changed much? She’s just got dirtier, not older)
Kailashnath is very proud of Bobby, and life with Somna is comfortable. All’s well.

But then the unexpected happens. Amar returns to Pawangiri while Kailashnath is away in Delhi. Without knowing who Bobby is, he quickly grows fond of the child and becomes Bobby’s hero, replacing the absent Kailashnath in Bobby’s affections.

Pawangiri’s a small town, and with Bobby and Amar spending a lot of time together, it’s only a matter of time before Bobby drags his mother to meet `Unkill’. What happens when Amar and Somna discover that the other isn’t dead? What happens when Kailashnath returns? How do these two emotional triangles—two men and one woman/one child—get sorted out?

Ask me if you want to know; spare yourself the pain of seeing the film.

What I liked about this film:
Two songs: Yeh purdah hata do, zara mukhda dikha do, which is pretty tuneful, and Chal chal re naujawaan, a medley of parodied Hindi film songs—the lyrics are fairly amusing.

What I didn’t like:
Just about everything else. The comic side plot is irritating; the beggars get on my nerves; and the main theme—the tussle between the biological father and the man who’s brought up the child—is badly handled and melodramatic. And the less said about Bobby the better; that kid is a pain in the you-know-where. If I’d been Amar, I’d have been very happy to let Kailashnath bring up the brat.
(Question#9: Why did Balraj Sahni and Sadhana, both of whom were generally very discerning when it came to choosing roles, do this film?)