After Usne Kaha Tha, it’s time for yet another Nanda film (though Sadhana plays an equally, if not more important role in it). And a coincidence: this one too is against the backdrop of World War II. But that’s where the resemblance ends. Hum Dono is a very different story, more mainstream than Usne Kaha Tha, yet equally enjoyable—and with superb music by the underrated Jaidev. 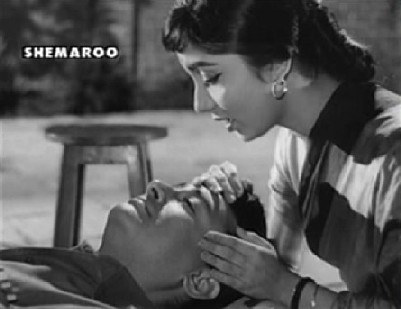 The film, in fact, begins with a song, the lovely Abhi na jaao chhodkar, sung by a much-in-love Anand (Dev Anand) to his girlfriend Meeta (Sadhana). Anand is supposed to meet Meeta’s extremely wealthy father (Jagirdar) the next day to ask for Meeta’s hand in marriage. Though Meeta does her best to reassure him, Anand’s got the jitters. 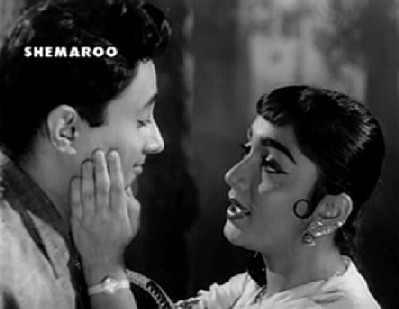 And with reason. Anand is unemployed and lives in a hovel with his mother (Leela Chitnis). When Anand’s mother comes to know he’s going to meet Meeta’s father, she warns Anand against aiming for the moon. Anand tells her his moon’s got her feet firmly on the ground. 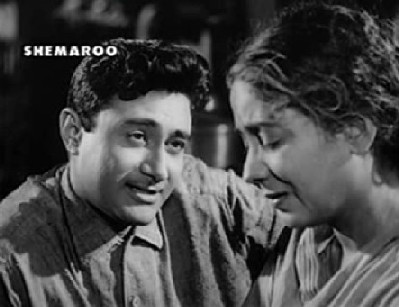 But when Anand goes to meet Meeta’s father, the apprehensions of his mother are proven right. Meeta’s father flings Anand’s poverty in his face, and asks him how he hopes to be able to provide for a girl who spends more on her birthday than Anand will be able to earn in his lifetime. Poverty, for a rich girl like Meeta, says her father, is all romance and poetry; if Meeta has to live that poverty, she’ll crack up.

Despite his outburst, Meeta’s father realises that Anand and Meeta love each other, so on his own, he gives his consent for the match just as Anand is leaving. Anand heads home, humiliated and angry, and à la Usne Kaha Tha, happens across a sign encouraging men to join the army. Anand decides on the spur of the moment to join up. His pay as an officer, and the respectability, will show ’em all he’s as good as anyone.
Anand’s mother nearly has hysterics when she discovers Anand’s leaving. She tries to stop him, pleading with him and using emotional blackmail.

None of it works though, and Anand goes off. Within less than a year (I found this very hard to believe), he’s trained and a Captain on the front in Burma. The film’s punctuated at this point by a few perfunctory shots of tanks and guns firing, shells exploding and the like, before it reverts to Anand shaving at a pond and singing Main zindagi ka saath nibhaata chala gaya.

Anand and Major Verma soon become good friends and discover that they even belong to the same city. Major Verma shows Anand photographs of his home, his mother (Lalita Pawar), and his beautiful wife Ruma (Nanda). He recounts how Ruma, despite her assertion that she never cries, broke into tears when he showed her his orders to head for the front. 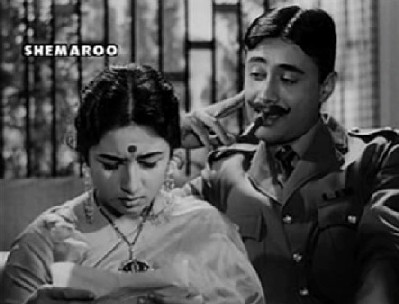 Meanwhile, Meeta—after having borne an initial tirade from Anand’s mother, who blames her and her father for Anand’s having gone off—has become friends with Anand’s mother. Having realised that Anand’s mother misses Anand a lot and is terribly lonely, Meeta moves in with the old woman. She will be the bahu of this house someday, in any case; so she might as well start now.

And in Major Verma’s grand house (it has a delightful name: Sunnyside. I wonder what Major Verma has for breakfast!), Ruma and her mother-in-law await news of their man. Every little letter from him is pounced on with glee, savoured and treasured.

In faraway Burma, though, the messing and the jolly singing has come to an end. The Japanese are attacking in hordes, and Major Verma’s keen eye and excellent aim combine to save Anand from snipers. In the ensuing crossfire, Verma is badly injured. At the same time, news arrives that an enemy contingent, 3,000 strong, is headed their way.

Major Verma gives orders for his men to pull out, leaving him behind to guard their backs with one machine gun. Anand refuses to leave, but Verma pulls rank and orders him—as he tells Anand, he’s anyway close to dead. But he does ask one favour of Anand: that Anand will go to his home and tell Ruma and his mother of his death, and will look after them.

Back from the frontline, Anand learns that he’s been promoted—he’s now a major—and that his leave has been sanctioned. His boss is fairly sure that the war will be over by the time Anand’s leave is over, so the chances of Anand risking his life in battle are now few. Anand goes back home, and finds his house empty.
He dozes off, and wakes up to find Meeta there, and learns the truth from her: his mother’s died while he’s been away. 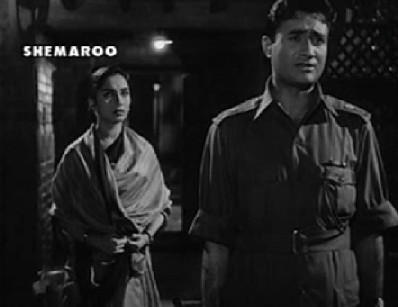 Anand now goes off to Sunnyside to break the news of Major Verma’s death to his mother and Ruma. They’ve already received a telegram from the military, informing them that Verma’s missing. Ever since, Ruma has gone into a decline: she hasn’t been eating, and is very ill.
A servant opens the door, sees Anand, and immediately mistakes him for Major Verma. Before Anand can respond, Major Verma’s mother has come and Ruma has been sent for.

Ruma comes downstairs from her room—and faints at Anand’s feet. The family doctor is sent for and after a checkup, has a tête-à- tête with Anand. He confesses that he’d suspected, for a while, that something was wrong with Ruma, but now knows for sure. Ruma has heart disease, and has just suffered a mild heart attack. She should be guarded from shocks of all kinds, he stresses: any trauma can be fatal.

Anand tells the doctor that he isn’t Major Verma and that he had only come to the house to inform Ruma and Verma’s mother of Verma’s death. The doctor’s astounded but is firm: Ruma cannot be told she’s a widow. If she’s to stay alive, Anand had better continue being Major Verma. Anand’s plea that he has a life of his own draws a cynical comment: “You should have thought of that before making that promise to Major Verma.”
So Anand finds himself acting a part he isn’t: being a son to a woman who isn’t his mother, and friends with men like the irrepressibly jovial Jagdish (Jagdish Raj, for once not acting a policeman), whom he’s never seen in his life.

Worst of all, he has to pretend to be the husband of a woman who’s puzzled and hurt to find her husband suddenly distant, both physically and emotionally. 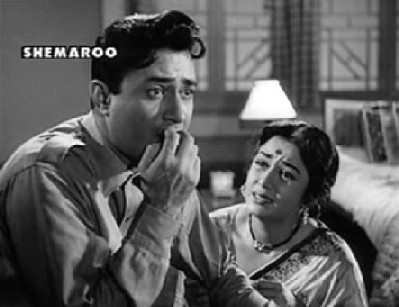 How will Anand solve his dilemma? Will he be able to put his concern for Verma’s family aside for the sake of his own life? And what of the faithful Meeta, who’s stood by through thick and thin?
A very watchable film, definitely among the best Dev Anand starrers of the early 60’s. It’s entertaining, and the end is a surprisingly poignant one, even though it is a little on the melodramatic side.

What I liked about this film:
The music. It’s not chockfull of songs, but each one of the songs there are, is a gem. My favourite bhajan (not that I’m fond of them) is here too: Allah tero naam ishwar tero naam.
Dev Anand. In Hum Dono he’s blessedly free of mannerisms (well, most of the time) and is generally quite convincing as two different men.

The silences. A couple of the most poignant scenes in the film actually have no dialogue—just gestures. The scene where Major Verma gives Ruma his orders, for her to read for herself, is one of these, and it’s unforgettable. I just wish there’d been more scenes like that, though the end (a beautiful one) also manages to achieve a lot just through expressions.

What I didn’t like:
The depiction of the war. It really didn’t look realistic at all, even though they’ve obviously used live footage in places, and the Indian Army helped in the filming.
One thing that always irritates me is how people in Hindi films never manage to get a word in edgeways just when they’re getting themselves into a hole. Here too, Anand—well before Ruma is told of `Major Verma’s’ arrival—doesn’t appear to make any attempt to tell the servant or Major Verma’s mother that he isn’t Verma. He just keeps mum until it’s too late. Dumb. I’d have been hollering my head off.
And how can two men completely unrelated look so alike? Very hard to swallow.

But still. This film is definitely worth a dekko. One of the best double role films made in the 50’s and 60’s, in my opinion.