After having done a fairly thorough job of lambasting The Charge of the Light Brigade for depicting India idiotically, I decided I had to show that I’m unbiased. If Hollywood could make a mess when it came to foreigners and foreign settings, Hindi cinema could surpass it. And how!
Dr Kotnis ki Amar Kahani is based on the real-life story of Dr Dwarkanath S Kotnis, who went to China in 1938 as part of a medical mission and did exemplary work in China. This, on its own, would be too insipid for the average Hindi film. But the fact that Kotnis married a Chinese girl while he was treating the ailing masses—well, that gives this story plenty of potential, and V Shantaram, director and lead actor of this film, milks it to the melodramatic full.

Dwarkanath Kotnis (V Shantaram) has come home to Sholapur after completing his medical studies in Bombay. His father (Keshavrao Date) and mother (Protima Devi; when did she first begin acting the mother? I don’t remember seeing her as anything but a longsuffering ma) are delighted to have Dwarka home.

Dwarka’s father, in fact, has a surprise up his sleeve. A clinic, with Dwarka’s name on the nameplate and polished new equipment inside, is waiting for Dwarka to set up practice. Dwarka, however, says that he’s decided to go to China. This is 1938, and Japan’s been wreaking havoc in China. In Bombay the previous evening, Dwarka has heard a political leader encouraging the masses to help China’s wounded and needy with materials, medicines—and expertise. Doctors are needed urgently, and Dwarka has pledged to go.

Though broken-hearted, Dwarka’s parents let him go. At the dock in Bombay, Dwarka introduces them to the four other doctors who’ll be going with him: Drs Atal, Cholkar, Basu and Mukherjee. His parents have a going-away present for Dwarka, something that’ll remind him always of where his loyalties lie.

The five Indian doctors arrive at Chungking, where they languish for the next four months, missing home and not called upon to do much in the way of saving lives. One evening, though, the Japs start bombing the town and Dwarka goes off to help get the wounded out from under the debris. In the process, he meets an old man called Wong (Dewan Sharar). An instant friendship springs up between the two and when Wong tells Dwarka he’s spent ten years in India, Dwarka dubs him Kaka (`Uncle’) Wong. 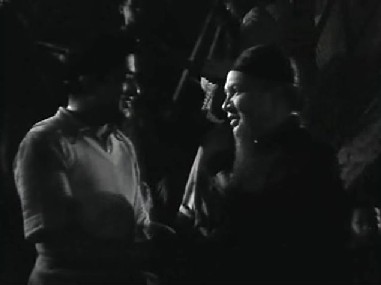 The doctors, after all this time, receive a bunch of long overdue mail from India. In a letter from home, Dwarka learns that his father has died. Urged on by his colleagues, he decides to return to India—and then changes his mind. No; his father and his mother had given him their blessings and they’d not have wanted him to come away without completing his mission.

And the mission does get under way. The doctors, all now wearing uniforms (? Don’t ask me what), have to go to Yanan. They’re told they’ll be escorted by a young man called Ah Ching (Jaishree), who has some knowledge of medicine.
These guys may be doctors, but they’ve either got terrible eyesight, or their knowledge of human anatomy is absymal. Ah Ching (an irritating character who seems to know only two phrases: “Nahin sahib” and “Haan sahib”) is so obviously female.

At Yanan (conveniently signposted in Hindi as well as Chinese: this, by the way, seems pretty universal), it’s very cold. The doctors arrive in a van that has an attractive and patently artificial icing-like trim of snow:

Ah Ching takes his (her?) leave, and the doctors settle down in Yanan. Six months later, the situation’s deteriorated. Drs Mukherjee and Cholkar, both having fallen ill in Yanan, have returned to India. Now Dr Atal is ill too and is about to leave for home. Basu and Dwarka have been given orders to proceed to two separate guerrilla outposts to help attend to the wounded of the guerrilla forces.
Dr Kotnis arrives at the guerrilla outpost he’s been deputed to. This consists of some ridiculously fake-looking caves:

He is introduced to the guerrilla leader, General Fong (Baburao Pendharkar). Fong, we surmise from his hobbling on crutches while a medical orderly tries to bandage his leg, is the never-say-die sort. In post-1962 films, Fong would probably have been the undefeatable, malignant general whom only the hero can conquer. Here, he’s just hearty, vain about his wispy moustache, and fond of Dwarka. 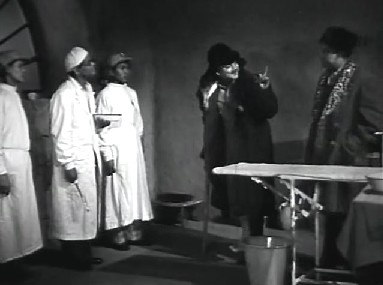 In fact, everybody seems to be fond of the young doctor—including his new assistant, Ah Ching, who’s shown up again like a bad penny. This time, a minor mishap reveals her to be a woman, and Dwarka is fascinated. She tells him her name’s Qinglan, and the sad tale emerges. Qinglan was a medical student at Nanking, where, during the Nanking Massacre, she lost all her family and friends. She’s escaped from Nanking disguised as a man and has been traumatised ever since.
(Why she remains disguised as a man until Dwarka cottons onto her is unexplained. Now that Dwarka knows she’s a woman, she makes no attempt to hide the fact. Ah, Hindi cinema’s mysterious motives).

Dwarka sympathises with Qinglan, of course, and before we know it, they’re in love. This consists of long bouts of maniacal laughter at distinctly unfunny stuff, interspersed with an ode to a teapot, on Dwarka’s part:

…and, on Qinglan’s part, a Hindi rendition (Main hoon nanhi nayi dulhan) of a song supposedly traditionally sung by Chinese brides. This is a hoot, with Jaishree mincing her way across the floor, hiding behind a bunch of baskets, and simpering like mad:

But when he proposes to her, Qinglan refuses Dwarka, telling him she can never marry. He’s understandably miffed. Thank heavens for the timely arrival of Kaka Wong, who puts in a word for Dwarka with General Fong. The general orders Qinglan and Dwarka to marry. Qinglan now seems very happy at the prospect of being wedded to Dwarka, so I can’t see what all the fuss was about in the first place.
Anyway, they get married (and I do think V Shantaram looks kinda cute in that Chinese outfit): 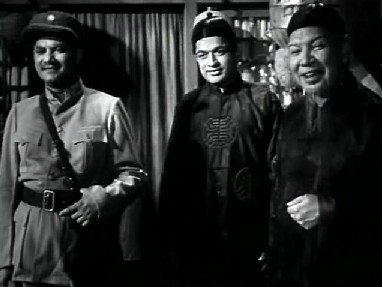 And what a suhaag raat: the Japanese bomb the area that night, and the next day, General Fong announces a pull out. The Japs are on to them and the caves are no longer safe. They’ve got to leave while they still can. So hundreds of men, women and children move out (in an impressive scene, well filmed. Almost certainly in the Western Ghats somewhere, but a believable China). Dwarka and Qinglan go along, attending to the sick and wounded being carried on stretchers.

Soon, Dwarka realises that many of his patients are succumbing to a deadly outbreak of pustules. (Dr Kotnis battled a form of plague, though this is never actually named in the film). No matter what medicine he gives them, they’re dying like fleas. Dwarka tells Qinglan he wants to deliberately seed himself with the infection so he can make a test specimen of himself, but she puts her foot down.

Will Dwarka be able to heal those he’s vowed to serve? Will the Japanese stay away long enough for Fong and Co. to do some singing and dancing (this is, after all, a Hindi film)? Will I be able to think of any of these people as Chinese?

Watch. Really; it’s not as bad as it sounds.

What I liked about this film:
The fact that it grows on you. I’ve come across too many films—Hindi and English—that start off well and deteriorate into gibberish. This one begins slowly and none too promisingly, but after a while, I began to fall under its spell. I suppose I got used to all of its shortcomings, but even otherwise: the pace is better and the scripting (I think) tighter in the second half. The last scene, especially, is memorable and almost surreal. Melodramatic, of course, but still worth a watch.

One of my favourite actresses of the 60’s puts in an appearance. She’s not yet as pretty as she was in later years, but V Shantaram and Jaishree’s real-life daughter Rajshree is cute as a button in her tiny role as Dwarka and Qinglan’s baby son!

What I didn’t like:
Oh, much. Very much.
As I said, the `Chineseness’ of the film is too unbelievable. Nearly everybody speaks fluent Hindi and signs are in two languages: Chinese and Hindi (yes, I suppose that was the only way to reach out to a largely Hindi-speaking audience, but even then). And the conical hats are oh so not right!

Worst of all, too many of the people just don’t look Chinese. `Papa Ajoba’ (Ram Tipnis), who worked on the makeup, in this delightful interview, reminisces about his experiences while making Dr Kotnis ki Amar Kahani. He talks of how they used, instead of latex or cotton, paint to make Indians look Chinese. Sorry, guys: it didn’t work, especially not for Jaishree.

[The interview, for those who don’t understand Hindi, has an anecdote about Kaka Wong’s beard. The crew included a Chinese lady whom they referred to for costume etc. She said that an old priest—I hadn’t realised that’s what Wong was—would have 36 hairs in his beard. Since such customised beards weren’t available, Tipnis suggested they get the hairs from a horse’s mane. The horse that pulls the cart at the beginning of the film, when Dwarka returns to Sholapur, was used as a source. 36 hairs from its mane went into making Kaka Wong’s beard, which was carefully removed every evening at packup].

The acting. It’s very theatrical and over the top. After a while, you get used to it—and it’s a little better towards the end—but still.

Despite the melodrama, the unconvincing makeup and sets, and the less-than-perfect acting, Dr Kotnis ki Amar Kahani merits watching. If nothing else, it’s an interesting insight into the evolution of Hindi films. The high melodrama and theatrical acting of earlier films was on its way out, and better researched (well, some), more professional film-making was inching its way in. Dr Kotnis ke Amar Kahani itself may seem dated today, but it’s a forerunner for films like Andaz, made a mere 3 years later, but with a freshness that’s survived the test of time.

More on that later.