In Sone ki Chidiya, a poet tells a film actress why poor people go to the cinema: “For five annas’ worth of false dreams. And the glow of your beauty.”
On the surface, this may seem as cynical a comment on the Hindi film industry as Kaagaz ke Phool, but it isn’t, really. It’s a much more mainstream commercial film, with all the trappings of melodrama, dewy-eyed romance and oppressed heroine. I saw it because it stars one of my favourite actresses—Nutan—and one actor whom I’m very fond of: Balraj Sahni. And (this came as a surprise to me) the cast also includes someone whom I count among my favourite singers: Talat Mahmood. 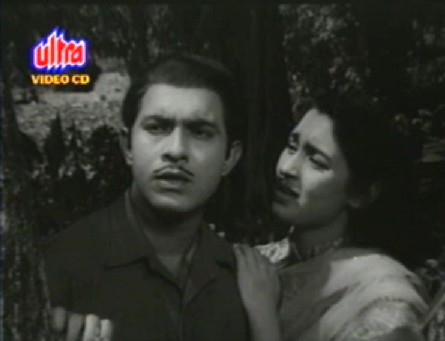 Lakshmi (Nutan) is a poor orphan who’s being shunted around from one set of distant relatives to the other. The latest household on which she’s been foisted is a poverty-stricken one consisting of thoroughly nasty people, all disgruntled with their lot and not at all happy to have Lakshmi thrust on them. The mother of the household (Pratima Devi) nearly pushes Lakshmi out. The elder brother, his screechy wife and their children leave in a huff when Lakshmi arrives. The younger brother Balram ‘Ballu’ (actor?) is more interested in where his next bottle of liquor’s coming from than in Lakshmi.

The only person who treats Lakshmi kindly is the father of the house (actor?), who spends all his time dabbling in alchemy in the hope that someday he will be able to manufacture loads (lodes?) of gold and put an end to their financial problems.
Lakshmi has one other source of solace: the writings of a poet called Srikant (Balraj Sahni), whose book is very dear to Lakshmi. She sings his poems while going about her work, and gazes fondly at his picture on the inside of the book. 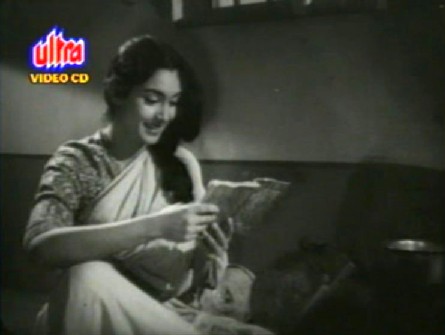 One day Ballu, who’s desperate for a drink, decides to make an easy buck by selling Lakshmi. He sends Lakshmi out in the evening on an errand, and arranges for the ‘customer’ to grab her on a dark street corner. Lakshmi, however, manages to escape from the man, and running for her life, blunders into a theatre. Her sudden entry onstage disrupts the play in progress, and to pacify the irate audience, the manager (who had heard Lakshmi singing a few days earlier) persuades her to sing onstage.
[Aside: How come in Hindi films—Bandish, Mujrim, Kismat, etc—people escaping from villains or the police always end up blundering into theatres? And more often than not, onstage?] 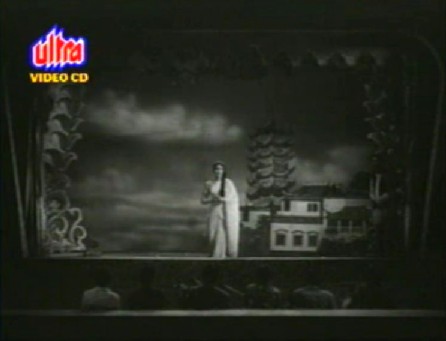 Lakshmi’s luck is exceptionally good; a film director (actor?) notices her and decides she must be his next heroine. He goes off to the producer (Dhumal, sporting a delightful Bambaiyya accent), who after some wheedling, gives in and offers Lakshmi a contract. The producer and director turn up at Lakshmi’s home with the offer, and her family—who’ve been busy clobbering her, under the impression that she’s been selling herself in the marketplace—lapse into a shocked silence. 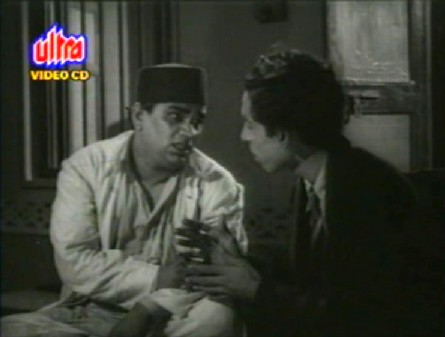 It takes some time for the truth to sink in, but it does, and everybody including the villainous Ballu realises the truth: Lakshmi can be rich, and she can make them rich.
There is now a swift flash-forward, with brief scenes from various films in which Lakshmi stars (opposite Dev Anand, Ashok Kumar, etc), the awards she receives at the Filmfare functions, and further evidence of her growing popularity, fame, and—inevitably—wealth. (I couldn’t figure out if the scenes were from actual films Nutan acted in opposite these leading men, or if Dev Anand and Ashok Kumar just made very brief guest appearances in Sone ki Chidiya—they don’t even have dialogues). 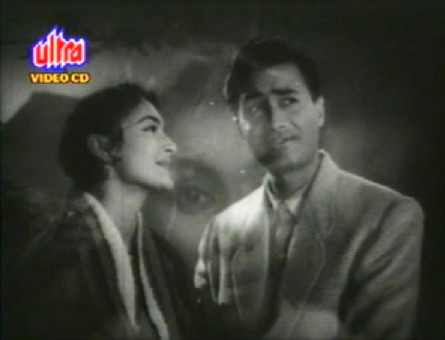 Lakshmi’s ‘family’, of course, partakes wholeheartedly of this windfall. Ballu’s elder brother returns with wife and children; the old aunt who’d initially dumped Lakshmi on this lot also arrives, and all of them—except an increasingly distressed Lakshmi—settle down to a hedonistic existence in the mansion that Ballu’s bought out of Lakshmi’s earnings. The women buy vast quantities of jewellery and innumerable silk saris; the men spend Lakshmi’s money on the house, on cars, and on drink. 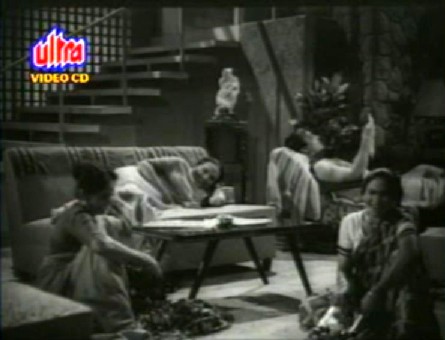 Ballu and his brother insist on accompanying Lakshmi on to the sets, and the family doesn’t even pass up the opportunity to barge into a photo session and have themselves shot. (Yes, somebody really should shoot these ghouls!) 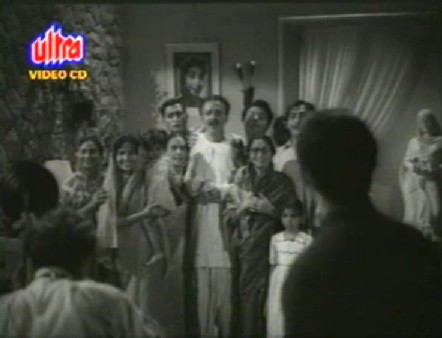 The photo session, however, culminates in a piece of good fortune for Lakshmi. The journalist who’s come for the interview is a young man named Amar (Talat Mahmood), and he is quite obviously attracted to Lakshmi. He tries to shake off her persistent family and get her alone for a while, and finally manages to phone her at the studio.
From there onwards, the Amar-Lakshmi romance progresses speedily. Before we know it (and, more importantly, before Lakshmi’s limpet-like relatives know it), Amar is singing Pyaar par bas toh nahin hai and Lakshmi is simpering prettily. 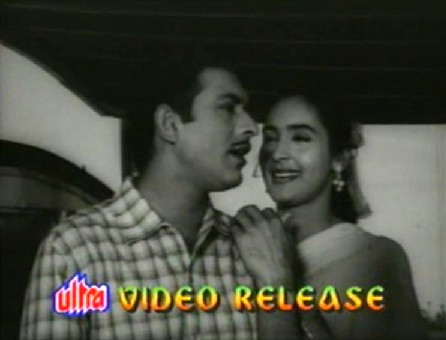 Lakshmi, hearing Amar sing (and can he sing!), plus seeing his personable appearance, agrees to put in a word for him when he asks her if she can get him into the film industry as an actor. The producer isn’t initially happy at this proposal, but when the director says that Amar starring opposite Lakshmi might induce her to pay more attention to her work (she’s been running off from the sets on dates with her beloved), the producer agrees. 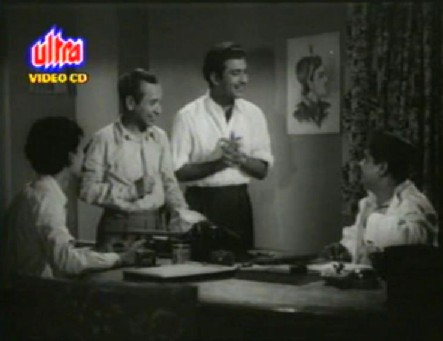 So Amar becomes an actor too, and everything is tickety-boo. That is, until it dawns on Ballu & Co. that their sone ki chidiya (literally, ‘golden bird’) is getting ready to fly off. If Lakshmi gets married to Amar and goes off, they’ll be left high and dry. They therefore try to tell her that Amar’s after her wealth. He doesn’t really love her. 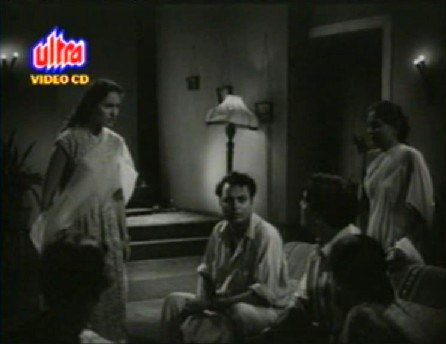 Lakshmi, though, is very sure of Amar’s love for her. She goes off to meet him and tells him everything, including of her boast to her family that Amar will marry her no matter what. 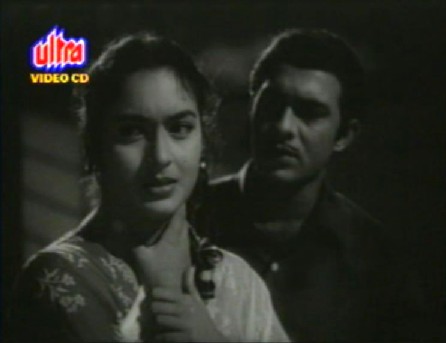 Amar is put off his stride a bit when he discovers that Lakshmi has no money, no jewellery, no anything to call her own. But—ha, ha (weak laugh here)—that doesn’t matter. She should go home and pack, and he’ll fetch a taxi and come for her. And that’s the last we see of Amar. He has, after all, three sisters whom he must get married off, with fat dowries for each: he can’t afford to marry a poor girl.
Poor Lakshmi sits up through the night, packed and waiting, running out into the road every time a car passes by or stops outside. When dawn comes, she’s still sitting, a broken and unhappy wreck now. 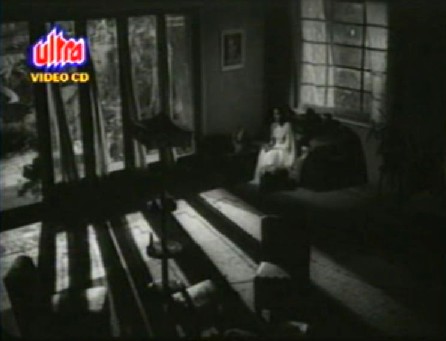 Pushed by Ballu, Lakshmi goes for the shoot the next day, but she can’t concentrate and has to leave the set in tears after repeatedly unsuccessful takes. 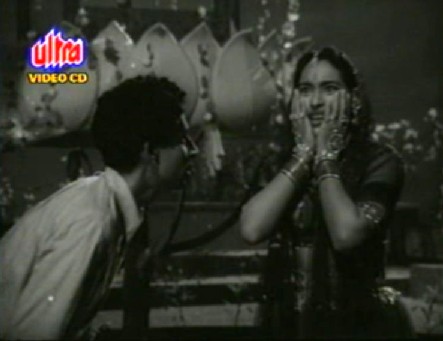 By nightfall, Lakshmi is at the end of her tether. Ballu has brutally informed her that one of the many papers he had got her to sign has contracted her out, for five years, to a film company that Ballu’s set up. And since the family’s run up many debts through their reckless splurging, Lakshmi will anyway have to work. Whether she wants to work or not, whether she’s even capable of it after the emotional trauma she’s going through—well, nobody’s really concerned about that.
Lakshmi, pushed to the brink, runs away to the seaside cliff and is getting ready to throw herself off when she is stopped by the singing of a man. 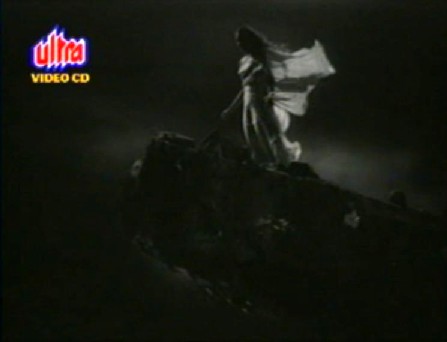 The words are so heartening that Lakshmi draws back, and is drawn inexorably towards the house from which the song is coming. She follows the song, and finally collapses and passes out at the base of the steps leading up to the house.
And guess who’s the singer? Lakshmi’s poet idol, Srikant! He discovers Lakshmi, takes her into his house, and puts her to bed—so that, when she wakes the next morning, whom should Lakshmi see asleep on the couch but Srikant himself? Suddenly life doesn’t look quite so dim. 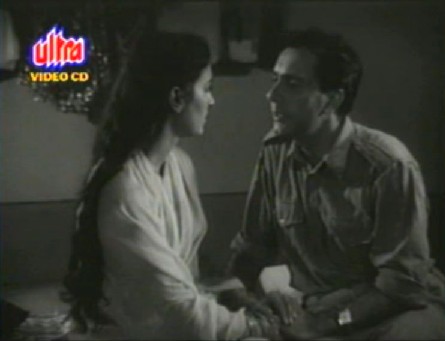 Will this mean the end of sorrow and ceaseless pummeling from her greedy relatives? Will Lakshmi finally get to savour some happiness? Or does fate—cruel, dastardly fate—have more unpleasant surprises in store for our heroine?

The music, by O P Nayyar. My favourite is Pyaar par bas toh nahin hai, but there are other songs too that are excellent—Raat bhar ka hai mehmaan andhera is probably among the best known.

The character of the heroine, Lakshmi. She’s just too much of a wimp. Even granted that she’s a poor orphan, she can surely show a little spine? Especially when she becomes the sole breadwinner of the family? But no; even rich and successful though she is, Lakshmi continues to let her relatives ride roughshod over her. Grrrr.

Talat Mahmood. No, I’m not cribbing about his being in the film; I’m cribbing about why he had such a brief role. I really wanted to see more of Talat here!

Be warned: Sone ki Chidiya is irritating in places, mainly because of its heroine’s irreparable tendency to be weak-kneed. But the pace is good, the story simple and not bad (and the premise—of a girl being jilted by one man and then falling in love with another—an unusual one for the 50’s). There’s even a little bit of insight into the ugly underbelly of the Hindi film industry, and a comment on the utter materialism of people, whether they’re Lakshmi’s money-grubbing relatives, or Amar.