Of the many things that fascinate me about old Hindi cinema, this is one: the making of films set in a time and space wholly alien to India of the mid-1900’s. The 1950’s, especially, seem to favour these sort of films, set in exotic locales and needing costumes, makeup, and sets that were vastly different from what one saw in the more usual Bollywood drama, thriller or even mythological. There was Yahudi (with Dilip Kumar looking far from Roman in a light-haired wig and ankle-length gown); Aurat (based on the story of Samson and Delilah)—and this one, about the Mongol warrior king, Changez (better known to the West as Genghis) Khan. 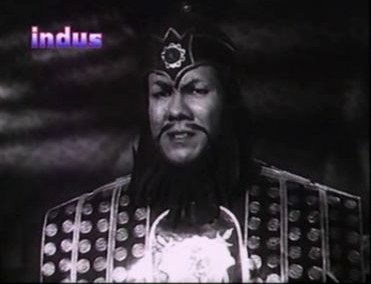 The story begins in the Mongol camp, where Changez Khan (Sheikh Mukhtar) has just returned from a military campaign against the Tatars. Along with all the loot, the Mongols have brought back prisoners—old men (whom Changez Khan orders killed), young men (whom he orders conscripted in his own army), and women (whom he imprisons). There is much singing and dancing in the Mongol camp that night, but Changez himself is dissatisfied and restless.

He finally confides in his Indian friend and adviser, Bindusar (Tiwari). It emerges that Changez Khan had once fallen in love with a Tatar princess named Azra (Bina Rai). Azra, however, would have nothing to do with him, as a result of which Changez had her parents killed and unleashed a campaign of terror against all of Asia. He has no idea where Azra is now, but she continues to be the only woman he wants—and he is ready to lay everything waste in an effort to get her.

Other people too are affected by Changez Khan’s bloodlust. His mother (Leela Misra), who still calls him by his given name of Temujin, is constantly praying to the muqaddas roohein (the ‘sacred spirits’) to cure her son of his desire to kill.
Her brother, Changez Khan’s uncle Ustad (Jeevan), however, is pleased with Changez Khan’s ambition, and does all he can to fuel it. When his sister wrings her hands and says she wants to see an end to this tyranny, Ustad’s contention is that it isn’t tyranny, it’s the rule of the powerful.

Among the trophies won in the Tatar campaign is a sort of large box with a horse’s head on one side (a Tatar Trojan horse?). That night, while the Mongols sleep off their drunken revelry, the box opens— 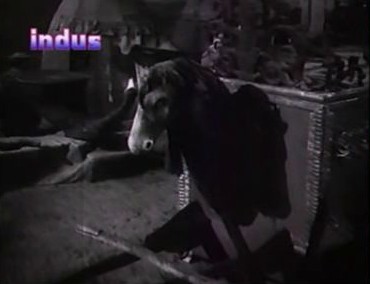 —and spews out a gang of Tatar warriors, led by the Tatar commander Sherwa (Premnath). He and his men are here to rescue their imprisoned compatriots (isn’t that logic flawed? Since the Tatar horse was captured during the campaign, why didn’t these men fight then? Or did they—as soon as they realised Changez was going to defeat them—stealthily slip into the horse, so that they could launch a rescue mission later? Worse still, they actually confine themselves only to rescue, not to sabotaging the Mongol camp).
Anyway, Sherwa ends up face to face with Changez Khan, who is impressed by the young Tatar’s bravery, and offers him a position in the Mongol army.

A position which Sherwa, proud Tatar that he is, immediately turns down, with the result that he ends up with his arms tied to a sort of heavy wooden beam balanced on his shoulders. Being the hero that he is, it doesn’t take him long to escape. He does this by waiting until his lone guard is sleeping (very soundly), which is when Sherwa uses his teeth to draw the guard’s sword out of the scabbard. When the men wakes, Sherwa bashes him over the head with that wooden beam.
When a man is so resourceful, he deserves to escape. 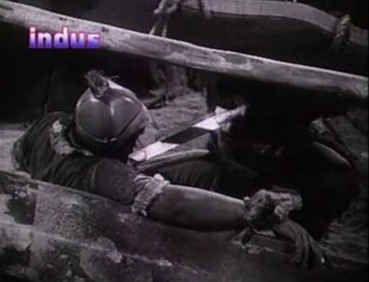 The scene now shifts to another of Changez Khan’s pillaging expeditions. After looting and killing and generally wreaking havoc, Changez has a newly-captured bunch of Tatari girls presented before him. He rips off their veils, one by one, and finds among them:

Azra!
Changez is ecstatic, but caught between his obsession for this woman and his anger at a Tatar who tries to protect her—the worthy Tatar is killed, and Azra too falls on her knees and dies of shock.
At this stage, another Tatar—a bitter character—informs Changez Khan that the woman who’s just copped it wasn’t Azra but her twin, Zohra. Azra, instead, is safe and sound at the palace of the Tatar king Sultan Wang.

Bindusar is therefore sent to Wang’s court with a request for Azra to be handed over, to be Changez’s bride. Azra’s lover, the loyal and brave Sherwa, is in court too, and voices a protest. Wang pays no heed—he doesn’t think the scales balance: one girl on the one hand, thousands of Tatar lives on the other?
So Sherwa and Azra try to flee, but are caught and brought back, and Azra asks Wang what he would have done if it had been his daughter Changez had asked for?

Which induces a change of heart in Wang. He actually does take his own daughter to Changez, and Changez throws a fit when he discovers the deception. He imprisons Sultan Wang, and gives orders that a search be launched for Azra.

The Mongols eventually succeed in finding Azra, but only accidentally. Sherwa has hidden her in a friend’s house, but the other Tatars, scared that a furious Changez will put all of them to the sword unless Azra is handed over, overpower both Sherwa and his friend and kidnap Azra, sending her off in a litter to Changez. Midway, Azra escapes, and accidentally blunders into Bindusar’s camp.

Bindusar treats her with great respect—she calls him ‘brother’, and like any good Indian (as he repeatedly reminds us he is), he will uphold the sanctity of that relationship. Having first (at her request) rescued Sherwa from the annoyed Tatars, Bindusar takes both Azra and Sherwa to Changez. When Azra still refuses to marry Changez (citing the glowering Sherwa as the reason), Changez tries to kill Sherwa—only to have Bindusar leap into the breach, ready to defend the happiness of his so-called ‘sister’. All this gets him is a swift arrest and some bitter recriminations from a Changez who feels betrayed.
Sherwa, who hurls some abuses at Changez, also gets arrested.

At this stage, Azra faints in something resembling death (the women in her family obviously have a very tenuous grip on life; remember Zohra’s sudden death?). This gives everyone else time to discuss the possible ramifications of what will happen if Changez marries Azra.
Changez himself has resolved that should Azra agree to marry him, he will renounce the way of the sword. He even proclaims this to his army, causing much confusion.
Uncle Ustad is thoroughly peeved at this decision and tries to persuade Changez to not act the milquetoast. 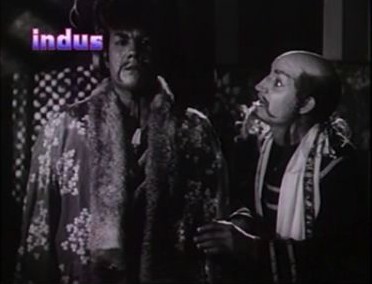 And Changez’s mother has her own agenda. If Changez will give up his bloodthirsty ways, she will be very grateful. So when Azra (helpfully revived by a chained Sherwa singing loudly out in the rain) finally agrees to meet the Queen Mother, she gets an earful. Changez’s mother pleads, cajoles, and uses the most shameless emotional blackmail ever to persuade Azra that her sacrifice (“love is sacrifice,” says the old lady) will save the lives of countless millions throughout the world. 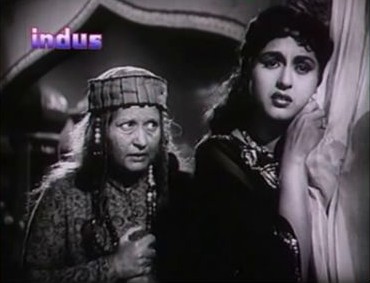 Will Azra give in? Or will her love for Sherwa win through? And what will become of Changez—will he continue with his ceaseless massacres, egged on by Ustad, or will Azra and his mother prevail? Watch on. There’s plenty more to come in this film, with more speechifying and some pretty mediocre swashbuckling.

Sheikh Mukhtar. Not a character actor I know too well (I’ve not seen enough of him to yet form an opinion), but he’s impressive in this one. Partly, of course, it’s his sheer physical presence—he towers over everybody—but there’s also something very imposing about his voice, his eyes, his style of acting. Good bit of casting, that.

Mohabbat zinda rehti hai. Composed by Hansraj Bahl and very well sung by Mohammad Rafi. Except for O ruk jaa… lautke aana hoga, this was for me the only good song in an otherwise lacklustre score. But Bahl seems to have devoted his energies to Mohabbat zinda rehti hai: it’s an excellent tune, and is repeated throughout the second half of the film.

Changez Khan isn’t one of those films for which I can pinpoint strong likes and dislikes. But yes, I’d have liked this better if the story had:
(a) fewer digressions
(b) less melodrama
(c) fewer flamboyant speeches
(d) much better props, costumes and makeup—especially for the supporting cast
(e) no comic side plot (Johnny Walker as Tez Khan, the Mongol who romances the hakim’s daughter much against the wishes of her father, is not at his best here)

But hey, worth one watch, at least. If for nothing else than to see Sheikh Mukhtar wearing what looks like a cross between a chandelier and a hangman’s noose on his head.