If there’s one film that’s quintessential Tyrone Power, it’s this one. The Mark of Zorro changed Tyrone Power from being just a pretty face to being a pretty face who could also do some very fancy stunts with a sword in hand. It made him a swashbuckling star, a stereotype that was to stick with him for a while, even though he tried to shake it off with roles like that in Nightmare Alley.
And what a film. What a rollicking, enjoyable, delightful film! I love every bit of it, and have been looking forward to sharing the joy with everybody ever since I first saw it, a few months back. So, without more ado, here goes. 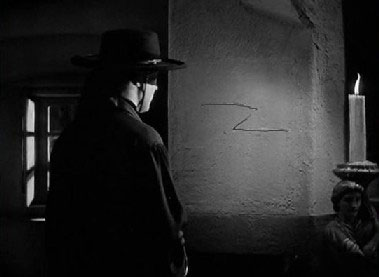 The story begins in Madrid, where the ‘Californian cockerel’, the accomplished young swordsman and caballero Don Diego Vega (Tyrone Power) is constantly having to fend off aspiring duellists who only want to cross swords with him for the honour of being able to boast that they’ve fought with Vega himself.
One day, Diego gets a message from his father in faraway California. Daddy has ordered Diego to give up his commission and come back home. Diego doesn’t like the idea—to him, California is the ultimate in provincialism: “a land of gentle missions, happy peons, sleepy caballeros and everlasting boredom.” 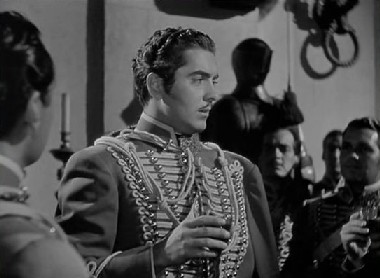 But Diego is nothing if not an obedient son. He takes the first ship out from Lisbon, and eventually turns up in California—where he’s in for a surprise. When Diego happens to mention that he is the son of the Alcalde, all the peons back off in fear and loathing. A cart-driver whom Diego approaches to drive him to Los Angeles turns out to have had his tongue torn out at the orders of the Alcalde, much to Diego’s horror. He can’t believe that his just, upright father has suddenly turned so tyrannical. 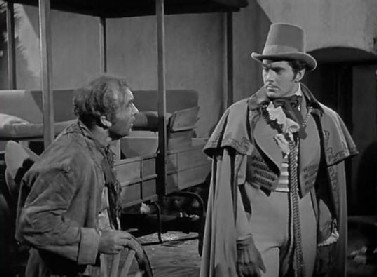 When he arrives at the Alcalde’s house in Los Angeles, the mystery is solved. The house is now part barracks, swarming with soldiers led by the sinister Captain Esteban Pasquale (Basil Rathbone), who serves the Alcalde—not Diego’s father, but the new Alcalde, Don Luis Quintero (J Edward Bromberg). Luis Quintero is a bit of a buffoon: plump and bumbling, greedy and grasping. It’s Esteban who is the real evil here. 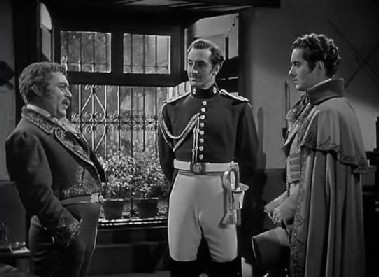 While Luis and Esteban are updating Diego with what’s been happening—his father has resigned as Alcalde and has moved to the Vega hacienda—Luis Quintero’s wife Inez (Gale Sondergaard) enters, and is immediately smitten by the handsome and polished Diego. Diego leaves no stone unturned in talking to her of the latest fashions in Spain, of the silks and satins and the perfumes of roses and carnations and whatnot. Esteban and Luis look on, obviously derisive of Diego’s effeminate foppishness, until Diego finally takes his leave.

— But not before he’s had a glimpse, in the adjoining garden, of Luis Quintero’s beautiful niece Lolita (Linda Darnell). Lolita too returns the favour by sneaking a peek at him when he leaves. She emerges from the house to watch him go. Along with her is Inez, already jealous of Lolita’s interest in the newcomer, and threatening to pack Lolita off to a convent. 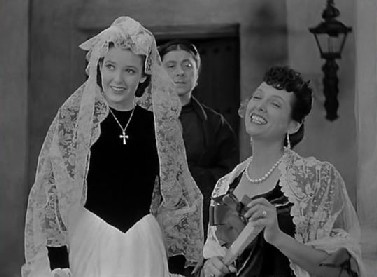 Diego, meanwhile, arrives at his parents’ hacienda, to be greeted by his father Don Alejandro (Montagu Love), his mother (Janet Beecher) and the friar Felipe (Eugene Pallette), along with a few of the neighbourhood’s most prominent caballeros. The reunion is touching, but a thread of apprehension soon weaves its way into the conversation: when Don Alejandro rages against the excesses of Luis Quintero and Esteban, Diego shrugs nonchalantly. It’s none of his business if the peons are getting crushed into the dirt because of the heavy taxes or Quintero’s completely arbitrary laws.

Friar Felipe and Don Alejandro are flabbergasted—Felipe goes so far as to call Diego a ‘puppy’ to his face—but Diego doesn’t seem to care. He’s too busy fanning himself and complaining about the heat.

A couple of days later the mid-afternoon sleepiness of Los Angeles is shattered by the Alcalde’s men, who’ve come to put up yet another edict on a wall, decreeing various increases in taxes for the already beleaguered peons.
The soldiers have just about begun to hammer the nails pinning the poster to the wall when they’re rudely interrupted by a black-caped masked rider who comes galloping into the square: 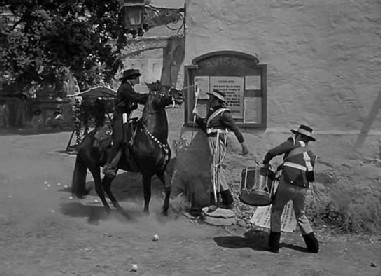 He overwhelms the soldiers, and makes him put up his announcement instead:

And before anybody can quite figure out what’s happening, the mysterious masked man—Zorro, the ‘fox’—has gone, leaving his mark on the shirt of one soldier. 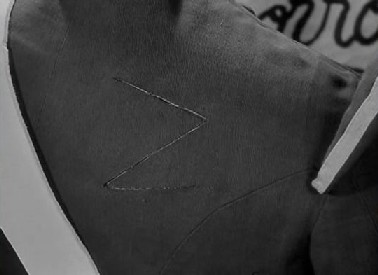 He next appears, most unfortunately for Luis Quintero and Inez, when he holds up their carriage. Luis Quintero has been trying to escape with a fat bundle of ill-gotten gold that he intends to hand over to someone leaving for Spain. Zorro quickly relieves Quintero of it—along with Inez’s expensive jewellery.

Later that evening, Zorro turns up again, like a bad penny, to torment Luis Quintero all over again. This time he hasn’t come to steal anything: he’s just come to threaten Quintero. He offers Quintero two options. Either resign and leave for Spain, handing over charge to Don Alejandro Vega, or leave for somewhere less savoury.
Quintero isn’t the bravest of men, and puts up no resistance. He agrees on Spain.

Zorro blindfolds him and escapes into the garden, just as Esteban arrives. Esteban raises the alarm, and soon the garden, the yard and everywhere around is milling with soldiers hot on the trail of Zorro.
The beautiful Lolita, meanwhile, has been kneeling in the chapel, praying for a husband who will love her and take her away from the ‘pesthouse’ that her uncle’s household has deteriorated into.

As she’s rising to leave, a dark-robed figure, face hidden by a cowl, emerges from inside the chapel. Lolita, of course, thinks this is their resident priest, but he says he’s from the mission and had come visiting. They fall into conversation, and Lolita is intrigued by this strange monk, who does his best to dissuade her from joining a convent, and goes so far as to tell her that she is more radiant, more lovely than a morning in June…

… and Lolita, now a little suspicious, looks a little more closely, just in time to see the tip of a sword protruding from under the ‘monk’s’ habit.
The moment of revelation is brief. Just then, the soldiers come pounding in, led by Inez, who takes Lolita away after instructing the ‘monk’ to lock up the chapel because Zorro is on the loose. The only tribute our faux monk is able to give his lovely lady is a surreptitious kiss on her hand—and she’s smitten too, because now she’s met Zorro (though she hasn’t seen his face)!

Not that Lolita knows what Zorro looks like, of course. So when Luis Quintero, egged on by Esteban to resolve the simmering rebellion by making a marital alliance, proposes a marriage between Lolita and Diego, Lolita is heartily displeased. In fact, on the evening when Diego comes to dinner (late, because his scented bathwater was so tepid), she is positively disgusted by this pretentious fop her uncle’s trying to push off onto her.

There’s more to come. More adventure, derring-do, a sprinkle of romance, some humour. Most of all, some awesome fencing. If you’re a fan of swashbucklers, do not miss this one. It’s thoroughly enjoyable.

Everything! But a special mention of Tyrone Power. Really. Basil Rathbone, speaking of Tyrone Power, said he could “fence Errol Flynn into a cocked hat,” and you get to see some of that skill here (even though large sections of the famous Rathbone-Power duel in the film used a double for Power). Even more than the fencing, I like Power’s acting as the fop: he is so deliciously ooh-la-la! There’s the lacy handkerchief, the affected mannerisms, the gentle mopping of his upper lip: the complete peacock. Spot on.

The denouement—the revelation of Diego Vega’s identity as Zorro—is disappointing. It could have been more suspenseful and dramatic.