Strangely—considering that Errol Flynn is best known for his swashbuckling roles—the film I most vividly remember of his is this one, an unusual war film. I first watched it years ago as a teenager, and ever since—in spite of having notched up The Prince and the Pauper, Captain Blood, The Adventures of Robin Hood and other blockbuster Flynn hits—this remains my favourite Errol Flynn film. Touching, thought-provoking, and utterly memorable. 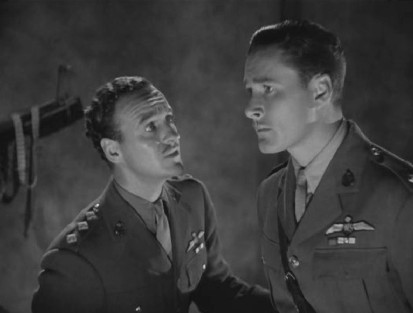 The Dawn Patrol falls in that very slim category, of films set in the First World War rather than the Second. The story traces the fragile lives—here today, snuffed out tomorrow—of a group of RAF pilots, the 59th, stationed in France in 1915. The 59th is based close to the lines that separate the British from the Germans, and it is the task of the 59th to go up in the air every morning (and often through the rest of the day too), carrying out recces, strafing the German positions, and hopefully coming back alive. 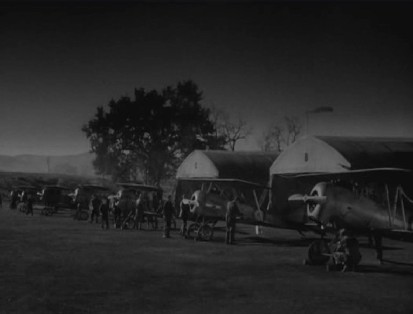 The commanding officer of the 59th is Major Brand (Basil Rathbone). To him falls the unpleasant duty of sending the men out on missions while remaining bound to his desk. 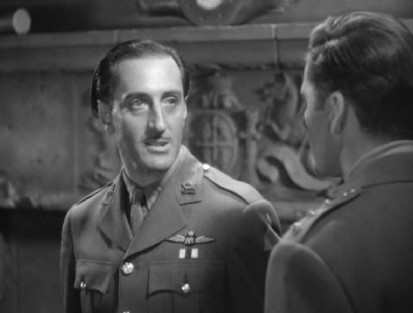 The two senior officers who do get to fly are Captain Courtney (Errol Flynn) and his bosom buddy Lieutenant Scott (David Niven), men with so many hours of experience in the air and so many daring tales of derring-do to recount, that death has become just another event that may come their way one of these days. 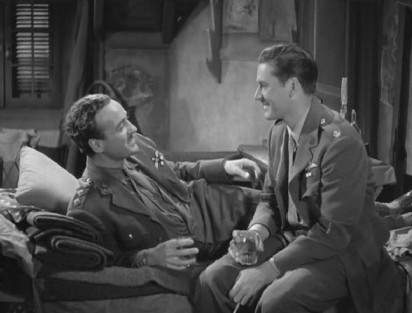 At the other end of the spectrum are the young men, fresh from training, who are sent out to the front to replace those who’ve ‘fallen in battle’. These are fresh-faced boys, barely out of school, none with more than 20 hours of flying experience, all of them eager to get into battle. For them, the war is a schoolboy’s adventure, glorious and exciting and offering them the chance to be heroes. The blood and agony and the horror of war is non-existent for them. 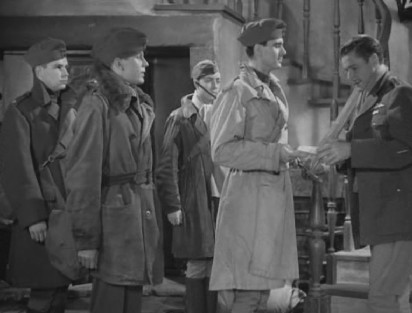 Worst still is the fact that there is no time to be spent in training these youngsters. Courtney argues with Brand, pleading that he be allowed just two weeks to teach the newcomers some battle manoeuvres, something that will give them at least a fighting chance—but Brand flatly refuses. Not, as Courtney thinks, because he’s unjust and heartless, but because his boss—a disjointed voice in a cosy office at the end of the phone line—won’t allow it. 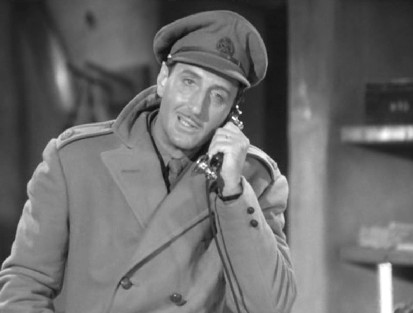 Somewhere in the middle, between the embittered Brand, the devil-may-care Courtney and Scott, and the excited youngsters, are men like Hollister (Peter Willes). Hollister is young enough to weep when one of his friends is killed in combat, and young enough to rail helplessly at the cannon fodder he and his colleagues have become. 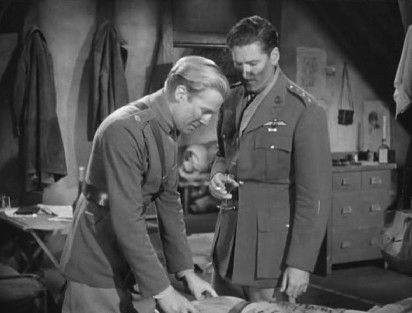 The Dawn Patrol is the story of these men. It is the story of how they serve their time at the front, aware that the next flight out may well be their last ever: that they may never go back home, never see their friends and families again. It is, in some ways, a tale of the resilience of human nature. These men, constantly on the edge of death (or perhaps because they are always facing death?) are now able to laugh at their own mortality. Evening comes, and they gather around, drinking and chatting and singing loudly “Hurrah for the next man that dies!” 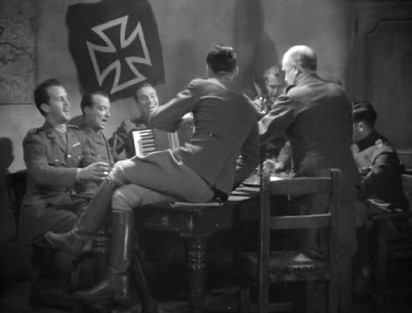 There are moments when the joie de vivre seems forced. The eyes hold fear and anguish but the lips smile—until you feel that those smiles will finally crack. Sometimes, there are mad escapades, adventures that almost seem Biggles-like in their superficial daring. One day, for instance, a passing German pilot throws down a pair of boots with a note attached, to the effect that the British pilots should wear them, since the British seem more at home on the ground than in the air. 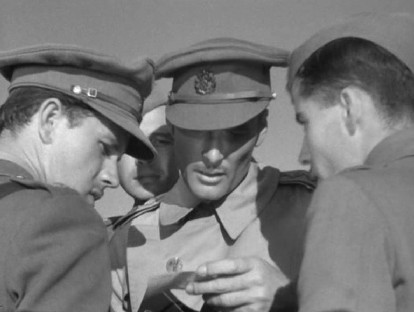 To salvage their pride, Courtney and Scott sneak out that night—in direct disobedience of Brand’s orders—and not just return the boots to the Germans, but also blow up vast swathes of German installations. All very much the heroic schoolboy type: stand up to a challenge, show the world you’re better than they think you are (much better), and do it all with a sense of humour… 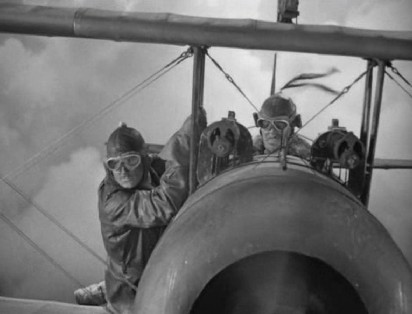 …even though, in the process of one of these adventures, Scott goes missing and Courtney suddenly joins the ranks of men like Hollister, sorely missing a dear friend. Courtney, of course, is a man and not a boy; he doesn’t cry, he doesn’t rage like the emotional Hollister, but you can see the pain in his eyes.

There is Brand, frustrated and helpless because to him falls the task of sending men out to their deaths—without the compensating privilege of facing the challenge of death himself. His assignment ties Brand down to the ground, and he hates every minute of it. When the 59th flies out every morning, Brand wonders how many of them will come back. When they do come in, flying over the airfield, Brand stiffens, automatically counting off each plane on his fingertips, just by listening to the sound of the engine as it roars in… how many men have died today? 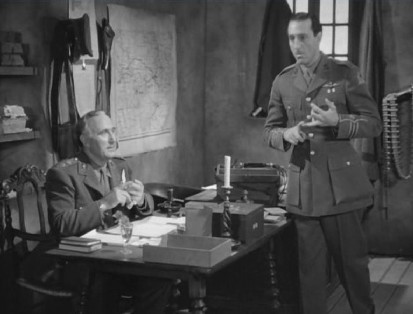 And there is, against this, the bluff, sympathetic Phipps (Donald Crisp), Brand’s assistant, who cheerfully reads out his daughter’s letters from home. About new puppies, about primroses flowering—about new life, so very different from the death he and Brand and the men of the 59th face. 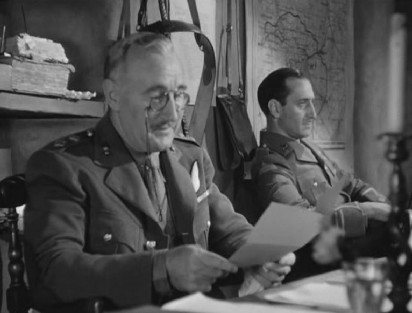 More happens: the unexpected capture of a suave German officer, for example, which results in very different reactions from the British… 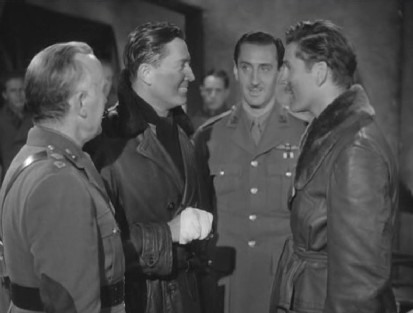 The arrival of a new batch of replacements, among them Scott’s own ‘baby brother’ Donnie (Morton Lowry)… 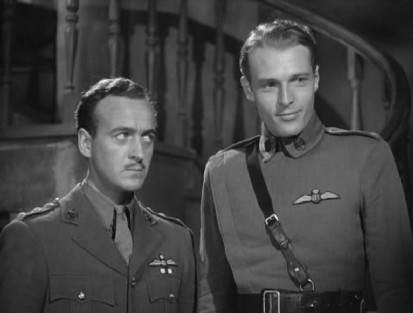 …and a sudden change in the fortunes of Brand and Courtney.

This is, ultimately, a beautifully nuanced film about war and the futility of it. Yes, there are mad adventures; but there is also death: the death those enthusiastic schoolboys ignore in their reckless craze for glory. There is frustration and resentment: the natural resentment of the more literally-minded for the ‘enemy’, but also the resentment of the more mature for the predicaments they find themselves in. There are twists of fate that change men’s perspectives. There are moments of humour. There are tiny rays of light, camaraderie and laughter that take away the spectre of death, even if only for a few minutes.

And there is, for a war film, a very strong element of pacifism. As Courtney tells Donnie in a moment of reflection, on war: “A great big noisy and rather stupid game that makes no sense at all. None of us know what it’s all about or why… then one day I suppose it’ll all end as suddenly as it began. We’ll go home. Till some other bunch of criminal idiots sitting around a large table shoves us into another war…”

A superb and unforgettable film. If you get a chance to watch it, don’t miss it.

Everything. The screenplay, the acting, and, especially, the very fine characterisation. Each of the main players—Courtney, Scott, Brand and Phipps—have distinct characters, with well crafted layers that are revealed as the story progresses.

Some of the special effects, which didn’t look too realistic. But, considering The Dawn Patrol was made way back in 1938, I’m more than willing to forgive that.

The Dawn Patrol was a remake of a 1930 film of the same name. Both films were based on a short story by John Monk Saunders, who, despite serving in the Air force, was never able to actually go into battle, a fact that plagued him for much of his life (and which, of course, is the main theme behind the character of Brand in the film). Saunders won an Oscar for Best Story for The Dawn Patrol (1930).
Several flying sequences from the 1930 film were re-used in the 1938 film to avoid shooting them again.