Another offering for Flynn Week.

It was said, at one time, that if Bette Davis was the queen of Warner Brothers, Errol Flynn was the king. And a king, too, with a lineage that was astounding, to say the least. The Tasmanian-born Flynn spent a few years as a young man in Papua New Guinea holding down jobs as varied (and in some cases illegal) as diamond smuggler, slave recruiter, gold prospector, sheep castrator, and manager of tobacco and coconut plantations, before washing up in the big bad world of cinema. Flynn’s first role was as his own ancestor, Fletcher Christian, a mutineer on the HMS Bounty; two years later, opposite Olivia de Havilland (who was a very distant relative of his), Flynn acted as the pirate Captain Blood—and the king of swashbucklers had arrived. 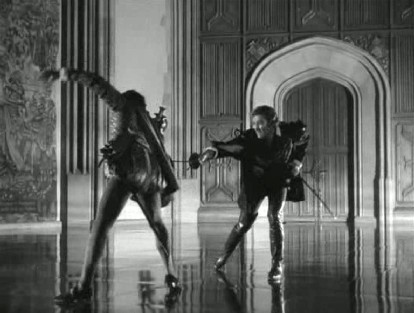 While probably not as popular as Captain Blood, The Seahawk is also an entertaining pirate film starring Errol Flynn. The novel The Seahawk was written by master swashbuckler-novelist Rafael Sabatini (also the creator of Scaramouche, Captain Blood and The Black Swan), but by the time the film got made, all that remained of Sabatini’s novel was the title—Flynn’s film hasn’t even a passing resemblance to the book. It is, however, a good showcase for Flynn’s skills with rapier, pistol and rope. 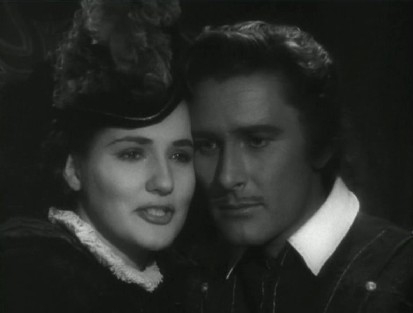 The Seahawk begins in the court of King Phillip of Spain (Montagu Love). Amidst some gorgeously crisp light-and-shadow cinematography (against a wall-high map of Europe and the New World), we learn of Phillip’s ambitions: that the map of the world will soon become a map of Spain. For now, Phillip’s greatest concern is Queen Elizabeth of England. To lull her suspicions about his ambitions, Phillip has decided to send Don José Alvarez de Cordoba (Claude Rains) to Elizabeth’s court as an ambassador.

Cut to later, on the ship bound for England. Don José Alvarez is being accompanied by his beautiful niece Doña Maria (Brenda Marshall, who was roped into the film after Flynn film staple Olivia de Havilland decided she’d had enough of acting in swashbucklers). Maria’s mother was English, as is her duenna Martha (Una O’Connor), and Don José Alvarez is hopeful that Elizabeth will accept Maria as a lady-in-waiting. 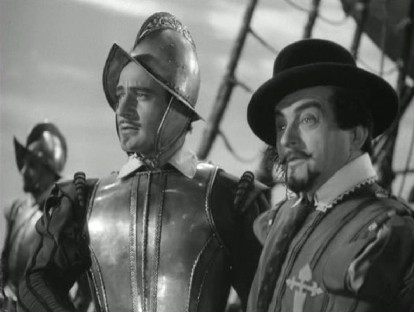 But those hopes seem doomed. Out of the English Channel comes the ship the Albatross, commanded by a seahawk (a privateer; there are several of them) named Geoffrey Thorpe (Errol Flynn). Thorpe, along with his men and a very irritating pet monkey, attacks the Spanish ship and soon manages to overpower it.

Everything aboard the Spanish vessel—treasure, a horde of slaves at the oars, the crew, Maria, her duenna and her uncle—are all transferred onto the Albatross.

Thorpe is, from the start, a little tongue-tied in the presence of Maria. She, on the other hand, is cold and disdainful, calling him a thief, because he’s taken all the jewellery she’d been carrying. Thorpe’s retort—that most of that jewellery had originally belonged to the Aztecs, and he wonders ‘how those Indians were persuaded to part with them’—leaves Maria a little flustered. When she goes to her cabin and discovers that he’s returned all her jewellery, it takes the wind out of her sails.

Back in England, Queen Elizabeth (Flora Robson, who had a good deal of practice—she had already played Elizabeth in Fire over England) is getting antsy.

Queen Elizabeth’s seahawks, especially Thorpe, and the admiral Sir John Burleson (Donald Crisp) have been advising her to build up England’s fleet, but Elizabeth doesn’t have the funds for it. Also, her adviser Lord Wolfingham (Henry Daniell) has been doing his best to convince Elizabeth that she needn’t fear Phillip of Spain: he has no designs on England.

Lord Wolfingham’s reassurances work on Elizabeth, so that when the Albatross docks, Elizabeth graciously receives Don José Alvarez as the Spanish ambassador. There are some grumblings—mainly on the part of Lord Wolfingham—regarding Thorpe, whom Wolfingham feels is being allowed too much leeway by Elizabeth. When Thorpe arrives, Wolfingham and Don Alvarez accuse him of piracy and thievery, but Thorpe deflects their charges. The queen herself is inclined to be lenient towards Thorpe. I can see why.

In a private audience with the queen, Thorpe assures her that his attack on the Spanish ship was justified: it was loaded down with galley slaves who were Englishmen, and it was carrying treasure the Spanish had looted from South America. In other words, stealing from thieves is not stealing. Elizabeth is quick to forgive Thorpe, and he’s soon giving her further advice: build up that fleet. 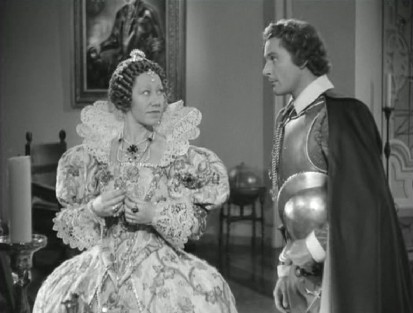 While politics is played out on one side, there’s romance in the air elsewhere. Somewhat. Maria, now living in the royal palace, is quite obviously infatuated with Geoffrey Thorpe, but too proud to say so. In fact, when she does happen to meet him in the rose garden and he speaks out his love for her, Maria blurts out denial, telling him that he’s mistaken, and that she feels nothing for him except gratitude for having brought her safe and sound to Elizabeth’s court. Silly girl.

Thorpe, having been rebuffed in such a cavalier fashion by his ladylove, slinks off and devotes himself to his next project: to gather enough wealth for Elizabeth to spruce up her fleet. The idea he’s suggested to the queen is again one of piracy, but this time on land. Thorpe has discovered that the Spanish will be transporting, across the Isthmus of Panama in South America, a mule train of gold looted from the Aztecs. There will be a vast sum of money there, and if the English are able to ambush the mule train, they’ll be rich. 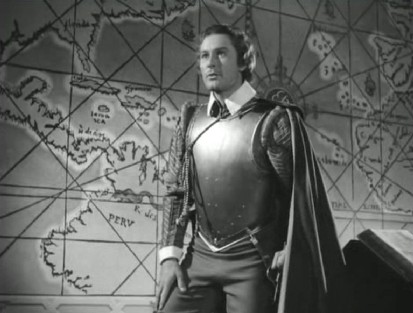 Elizabeth agrees—the thought of all that money makes her lick her lips—but cannily tells Thorpe that if he’s caught, he’s on his own. Very smart.
Thorpe is a patriot, so he acquiesces, and sets about getting ready for the trip. His ship, moored at Dover, is outfitted, and he takes on men for the voyage. Unknown to Thorpe, one of the men who volunteers is actually a spy for the Spanish…

…and their English collaborator, Lord Wolfingham!
With some judicious spying on the man who’s making charts for the Albatross, Wolfingham and Don José Alvarez are able to figure out where Thorpe’s heading, and why. One evening, Maria, playing chess with her uncle, learns that Thorpe will be leaving Dover for Panama soon; but a Spanish ship, bristling with soldiers, is already on its way, and will be ready with a thoroughly unpleasant reception for Thorpe when he arrives. 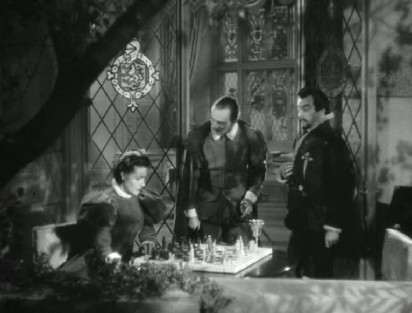 At which news, of course, since Maria is really in love with Thorpe after all, she realises she can’t sit by passively while the man she loves is slaughtered. So Maria, helped by her duenna Martha, takes a fast carriage from London to Dover, racing to stop Thorpe—but by the time she arrives, it’s to see the Albatross sailing far out to see. Poor Maria. Poor Thorpe.

Especially, poor Thorpe. The scene now switches to Panama (and sepia. The Seahawk had been made earlier too, in 1924, in a version that was largely faithful to Sabatini’s novel. The 1940 version of The Seahawk re-used parts of the 1924 film, which, since it was sepia-tinted, meant that an entire section of this film is brown-toned too). The Albatross anchors offshore, and a large party of men, led by Thorpe, goes ashore to ambush the Spanish. 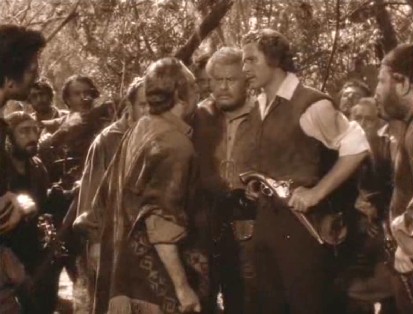 As we know, however, the Spanish are already prepared. They allow the English to capture the mule train, and although a suspicious Thorpe wonders at the ease with which the mission has been accomplished, he’s not wary enough to realise the truth. Before they know it, the English have been ambushed, many of them have been killed, and the others—Thorpe and a handful of his men—just about manage to totter back through the steaming jungle, onto the shore and back to their ship…

…which they find in the hands of the Spanish, who immediately capture them.
And one day Maria, far away in London, singing to the queen and her ladies-in-waiting, learns that Geoffrey Thorpe has been arrested, tried by the Spanish inquisitors, and been sentenced for life to be a slave in the galleys.

What now? Is there hope? Can Thorpe ever escape? Will Maria ever get a chance to tell Thorpe she loves him? Will someone please throttle that monkey?

The authentic look and feel of the sets and the costumes. A lot of effort had gone into this—for instance, for the scene where the Albatross engages with the Spanish ship, two full-size ships were created and floated on a huge sound stage with an internal tank that was flooded with water. The tank had a background mechanism to create artificial waves, and the stage—known as the Maritime Stage—was the second largest in Hollywood.
The costumes had an equally interesting history: many of them had been meticulously researched and created especially for the Errol Flynn-Bette Davis starrer Essex and Elizabeth (1939), and were re-used for The Seahawk.

The cinematography too is excellent: the climax, in particular, has a display of swordplay that’s fabulously filmed in a series of shadows and splashes of light. Very impressive.

The monkey! Yes, I guess it’s supposed to be rather smart and all, but it irritated the life out of me. I’m not one of those who are charmed by animals that are trained to pretend cuteness or beastly wit. 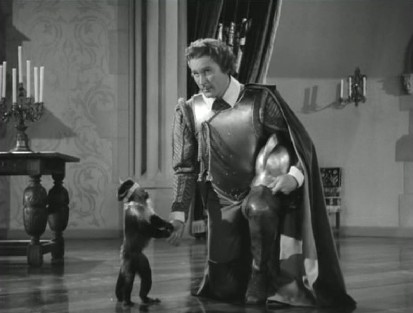 And there’s a sudden, out-of-the blue song that a bunch of pirates sing at one point in the film, which stuck out like a sore thumb. The look and feel of the film is not that of a musical, and that particular instance was not an appropriate one for a song.

Otherwise, all said and done, this is an enjoyable film. Good, action-filled adventure, with ample doses of romance and mystery and skulduggery and politics. There are some very fine actors in the cast, including Flynn faithfuls like Donald Crisp and Una O’Connor. And, of course, there is Errol Flynn, dashing and daring as ever. Watch; this is a good example of the Flynn brand of swashbuckler.