I should have smelt something fishy when I saw this: 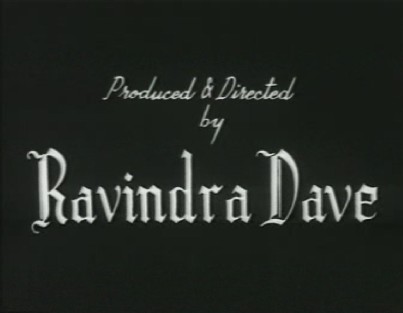 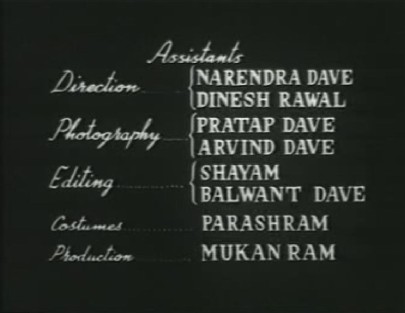 That looks like Ravindra Dave was doing all his unemployed relatives a favour. Or, more ominous, he’d cut corners and employed people whom he could bully into accepting fees in kind—Diwali dinners hosted at the Ravindra Dave home?
Two hours down the line, and I am certain that Ravindra Dave didn’t really have the money to have been making a full-length film. A short, perhaps; but not this.

First, the equipment seems to be second-hand. Several scenes, especially in the second half of the film, have strange smudges of black wandering across part of the frame, as if a little cloud of insects had alighted on the camera. Perhaps the cameraman had gone to sleep and didn’t notice, but those black specks (large specks!) move about across the frame for up to a minute at a time. Really insects, or some inherent defect in the camera? For the sake of all those Daves, I hope this is merely damage to the reel over the half century since this film was made.

And then this. The climax of the film takes place in a theatre, which has a distinctive door:

A couple of scenes down the line, there’s a scene in a hospital, where our man Vijay Anand is pacing about in front of a door that looks familiar. (Don’t miss the vase of flowers beside the door).

One set doubling for several settings?

Then, there is the sad fact that after a somewhat promising start, the story of Agra Road goes all over the place. I’m guessing again, now: was the writer Om Dogra not paid because of budget cuts? Did an uncredited Dave take over, with not the slightest idea of how to do a screenplay? Or did Om Dogra, unpaid and embittered, stick around but have his revenge by going berserk with the story?

But, to give you an idea of what the story is all about:
Seth Dhanraj (?) is a wealthy man who lives in Agra with two daughters—Sarita (Shakila) and Seema (Nanda), and a servant (Dhumal). Sarita is in love with Sunil (Vijay Anand), the son of a friend of Seth Dhanraj’s. Sunil and Sarita’s love is universally acknowledged and accepted; in fact, their fathers have now decided that their offspring can get married soon. 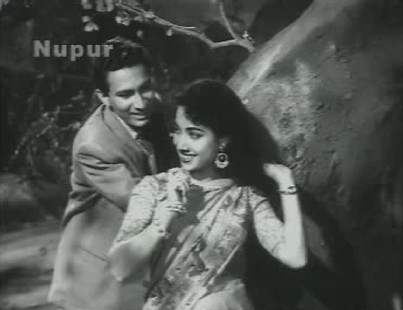 Before that can happen, though, a disagreement crops up. Sarita’s father insists that after the wedding, Sunil stay on as a gharjamaai (a son-in-law who lives with his in-laws, rather than taking his wife to stay with his parents). Sunil’s father puts his foot down; a gharjamaai is a bit of a wimp, in his opinion.
The two old men have a tiff over this point, and Sarita’s father reminds Sunil’s father of a long-ago debt—a loan that Sunil’s father had taken from Seth Dhanraj and has not yet cleared. Clear that debt or face the consequences, an angry Seth Dhanraj says. 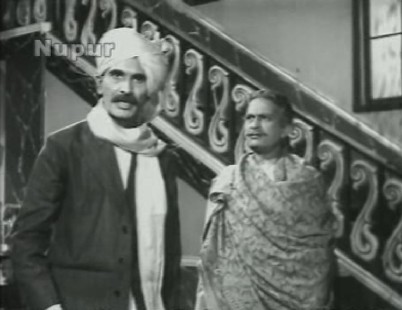 So the two fathers fall out, but Sarita and Sunil continue to meet each other on the sly. I really love the chemistry between these two: they’re not merely romantic, but very affectionate, and good friends.
One evening, Sarita is surreptitiously chatting in the garden with Sunil when her father arrives, and standing at the door—from where he can just about see a man with Sarita—asks whom she’s talking to. Sarita panics (Dad is unlikely to be pleased that she’s meeting Sunil on the sly), and blurts out that it’s a lawyer. Seth Dhanraj has been meaning to prosecute Sunil’s father for the outstanding debt, and has asked his clerk to find a lawyer.

In his hurry to make his escape, Sunil slips and falls, muddying his face and mussing up his hair; Seth Dhanraj’s clerk, who comes out too, also falls and loses his spectacles, which Sunil quickly dons himself. He and Sarita assume that Seth Dhanraj won’t be able to recognise Sunil, now bespectacled, messy-haired and dark (I think anybody who can’t tell the difference between a muddy face and brownface must have terrible eyesight). All goes well; Seth Dhanraj is very pleased with this new lawyer, who soon seems to spend all his time at Seth Dhanraj’s house.

In the meantime, Sarita’s younger sister Seema befriends a teenaged orphan, Bholu (? Satish Vyas?), whom she wants to paint a picture of. The painting—out on a hill, with Bholu playing his flute—proceeds happily until one day, when Seema nearly steps off the hill. Bholu, rushing to stop her, knocks over her painting, which annoys Seema no end; she hasn’t realised that Bholu, by his swift action, has actually saved her life. She loses her temper and slaps Bholu. So hard, that Bholu tumbles off the hill, is badly injured, and loses his voice as a result.

Now Seema is very contrite, and wheedles Seth Dhanraj into paying for Bholu’s treatment. When he’s recovered from his injuries (even though his voice is gone forever), she insists that Bholu come and live with them. So Bholu is informally adopted by Seth Dhanraj, and goes to live with Sarita, Seema and their father. 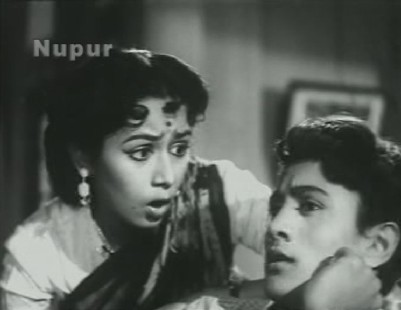 Back to the Sarita-Sunil saga. Seth Dhanraj, it turns out, was never fooled by Sunil’s masquerade as the lawyer. He has been pulling the wool over his daughter’s and her lover’s eyes all this while, and now very benevolently tells them so. He also says that he’s happy to not have Sunil as a gharjamaai, and he will equally happily forgive the debt that Sunil’s father owes him. Life’s too short to bear grudges.
If only he knew just how short his life’s going to be. 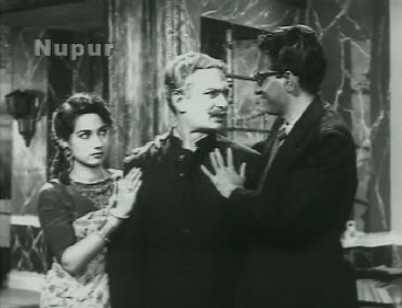 Now another character appears: Niranjan (Amarnath), Seth Dhanraj’s nephew. This man is a crook of the worst sort, and constantly fawning over Seth Dhanraj. Unknown to his uncle and his cousins, Niranjan is deeply in debt, and his main aim in coming to visit them is to steal money from Seth Dhanraj’s safe. This he attempts to do one night, but is caught red-handed by Seth Dhanraj—whom Niranjan immediately stabs to death. When Seema, who hears the sound of the scuffle, emerges from her room, Niranjan bashes her on the head, felling her too.

And, to hide his crime, he takes both bodies off to the Yamuna and pitches them into the river.
The next morning, Sarita (who knew Seema and their father had been planning a boat ride early that day) doesn’t start getting worried till the afternoon. Then, fretful, she phones the police, and they are finally able to find Seth Dhanraj’s body. The general consensus is that he’s drowned in a boating accident. Seema isn’t found (is any heroine/supporting actress/other female ever really drowned in a Hindi film?), except by two men who see her unconscious by the shore.

They rescue her, but oh, disaster! They’re evil men, who tie her up in their den while they play cards, drink and leer at a dancer. What they don’t know is that one of the taporis (Bhagwan) who’s visiting the den is actually Mr Khanna, a policeman in disguise. He knocks out all the villains, rescues Seema, and takes her back to Seth Dhanraj’s house…

…where there is now no Sarita to be found.
Niranjan, you see, has realised (with some help from Seth Dhanraj’s clerk, who is in cahoots with Niranjan) that with the Seth and Seema dead, Sarita is now heir to Seth Dhanraj’s millions. If Sarita were to die too, Niranjan—sole surviving member of the family—would become the heir. So Sarita must be bumped off, and where better to do that than in big, bad Bombay? (I don’t see why one can’t murder people in Agra—Niranjan seems pretty adept at it, but anyway).
Since Sarita won’t accompany Niranjan to Bombay on any pretext, he comes up with a convoluted, Woh Kaun Thi?-ish plan: he dons Seth Dhanraj’s clothes, and uses his cane to project shadows of himself onto the wall of Sarita’s room, his voice disguised to sound like her father’s, as he hollowly begs her to come to him. 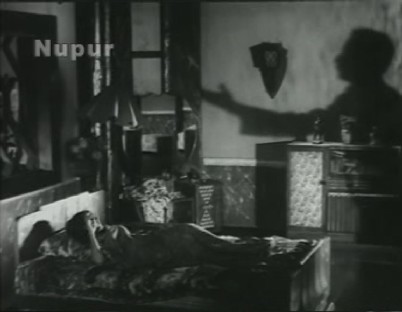 In just one ‘haunting’ Sarita goes more or less berserk and thinks her father is summoning her. Sunil and Niranjan call for a doctor, who promptly recommends a change of scene. And Niranjan has the perfect solution: Sarita (and Sunil, to help keep her company) must come with Niranjan to Bombay. Where Sarita hopes to get well, and Niranjan hopes to murder her…

To see whether he succeeds, watch Agra Road. On the other hand, since almost no heroine from a classic Hindi film (with the exception of Vimmi in Humraaz) ever gets killed, spare yourself the trouble.

The music. Roshan scores some lovely tunes for this film. My favourites are the delightful Unse rippy-tippy ho gayi (Geeta Dutt and Rafi, the latter yodelling as well as he sings) and O mister o mister, which sounds strangely familiar to me—I have a feeling it’s inspired from a Western tune. Can anyone recognise it? (Addendum: much thanks to kenjn60, who identified this as Woman (U-huh) by Rosemary Clooney and Jose Ferrer. Yes! O mister o mister is very obviously the same tune. Looks like Roshan didn’t get paid much either for this score…).

Shakila and Vijay Anand, as Sarita and Sunil. I love their interactions in the first half of the film: there’s an easy camaraderie and affection between their characters that is a pleasant change from the usual Hindi film couple. Very sweet! And they look good too.

All that I’ve listed in the first few paragraphs of this post. Even if I restrained myself from nitpicking, this is not a great film. Not even a good one. It might have been better with a little more attention to detail, and with more intelligent scripting. Perhaps if the audience hadn’t been let on to the fact that Niranjan was the villain—from almost the moment he appears—this would have been a tolerably good suspense film. As such, it’s just a tedious tale, with the only suspense being when and how Sarita, Sunil, Mr Khanna etc will discover the truth behind Niranjan’s facade. And there are just too many mysterious motives, illogical turns, pointless actions and holes in the plot to make this a believable crime story anyway.