I watched two old Hindi films last week, both with a love triangle—of sorts—as a central plot element. The first film, Saheli (Pradeep Kumar-Kalpana-Vijaya Choudhary) was an indifferent, predictable, forgettable flick which crescendoed into high melodrama. This one, a rewatch, makes for more satisfying reviewing, since the story is more interesting, the cast is better—barring one glaring and painful exception—and the music is out of this world. Humraaz is a BR Films production and a fine example of the high entertainment value that characterises BR Chopra’s best films. Total paisa vasool.

This one gets off to a running start (one thing I especially liked about Humraaz: it’s fast-paced and little time is wasted—not even on a comic side plot). The story opens in Darjeeling, where Meena (an unforgivably wooden Vimmi) is being romanced, against a backdrop of scenic views of the Himalayas, and in lovely flower-filled gardens, by Army Captain Rajesh (Raj Kumar). 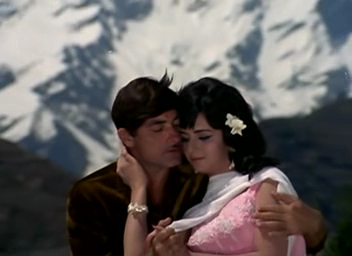 …while Meena’s father Mr Verma (Manmohan Krishna), who’s a military contractor, is in the middle of a boisterous drinking party with his army officer friends. He loudly asserts that he wants a son-in-law to whom he can hand over his business. No armyman for Meena; Mr Verma refuses to let his only child marry an armywallah and go away to some other part of the country. 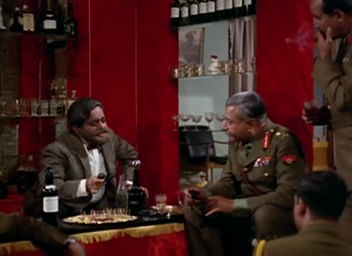 Which is just what Meena plans to do. Knowing her father’s attitude, she secretly marries Rajesh. But, being also a loving daughter, she writes to her father, telling him what she’s done and informing him that she will be going away with Rajesh. Unfortunately, Rajesh and Meena’s plans fall through; war is declared and Rajesh is posted to the NEFA border that very day. He leaves, but Mr Verma takes Meena home, assuring her of his forgiveness and telling her that once Rajesh is back, Mr Verma will have them married with much fanfare, not in this surreptitious fashion.

But oh, the cruelty of fate! Rajesh’s name appears on the list of the dead, and Meena, devastated, faints right away. The doctor (Nazir Kashmiri; did he play doctors when he wasn’t being Ramu Kaka?), summoned by Mr Verma, makes a worrying announcement: Meena is pregnant. Mr Verma is obviously shaken by this discovery, and we see the result in the next scene: on a winter’s night, Mr Verma is talking to Meena (I think she’s supposed to be exhausted after childbirth, but her makeup’s so perfect and each hair so perfectly styled, she looks as if she’s lying in bed out of boredom). Anyway, Mr Verma tells Meena that her baby was born dead. It’s all for the best, he says, completely tactless as ever: now no-one need know of Meena’s supposed indiscretions.

Time passes, and though Meena is still grieving (if an empty-eyed, expressionless stare can be construed as grief). She does go occasionally to parties and to the theatre. At a theatrical performance, she is noticed by Kumar (Sunil Dutt), an actor from Bombay who’s visiting Darjeeling to do some shows. Kumar swiftly falls in love with Meena and pursues her—fortunately in a somewhat dignified way, not with the shameless lechery of most Hindi film heros.

… with the result that Meena too finally falls in love with him. With Mr Verma’s blessings, they get married and go away to Bombay. Kumar introduces her to his friend, the lawyer Jagmohan (Iftekhar) and to his co-star Shabnam (Mumtaz). Meena feels an initial twinge of jealousy for Shabnam, but that’s soon set to rights, and while Kumar romances Shabnam onstage, in real life, he and Meena set about living happily ever after.

—or at least for the next four years. On the fourth anniversary of Meena and Kumar’s wedding, a frantic phone call comes from Darjeeling. Mr Verma is on his deathbed. Meena and Kumar hurry to Darjeeling, and Mr Verma manages to summon up enough strength to make a long overdue confession to Meena: four years ago, he’d lied to Meena. Her baby daughter was not born dead; Mr Verma gave her away to an orphanage. He now hands over the papers to Meena so that she can go find her daughter. 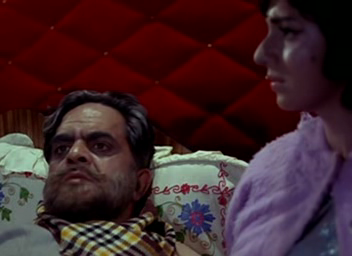 Back in Bombay, following her father’s death, Meena goes to the orphanage and meets her daughter Sarika (Baby Sarika). Meena hides the fact that she is the little girl’s mother, but the lady incharge of the orphanage (Achla Sachdev), noticing the instant bond between the woman and the child, readily allows Meena to take Sarika out for the day—and again and again, over the next few days.

In the course of these outings, Sarika and Meena grow very close—so much so that Meena suggests to Kumar that they adopt her. Kumar refuses gently; he fears that if and when Meena has children of her own, she will end up neglecting Sarika. Meena tries to reason with him, but it doesn’t work. Eventually, when the lady at the orphanage learns that Meena has no intention of adopting Sarika, she requests Meena not to visit the child any more, since this will only make the eventual parting more painful for Sarika.

She also agrees to give Sarika for adoption to Tejpal (Madan Puri). Tejpal tells an intriguing story: that he had a daughter of Sarika’s age, who died a while back. Tejpal’s father-in-law misses her terribly and refuses to accept her death. Since Sarika looks exactly like Tejpal’s little girl, Tejpal wants to adopt her and so keep his father-in-law happy. 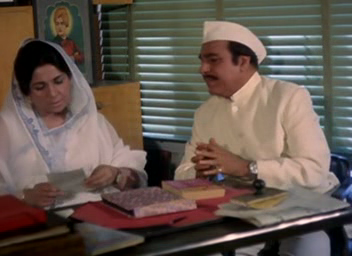 The scene now shifts to a New Year’s Eve party at a hotel. Kumar and Meena are celebrating too, when suddenly Meena spots someone wearing two-toned shoes: we don’t get to see the man’s face, but Meena looks frightened out of her wits. Shortly after, who should turn up but Captain Mahender (Anwar Hussain), Rajesh’s best friend? He recognises Meena and is surprised to hear that she’s remarried. Meena begs him not to speak about her marriage to Rajesh. 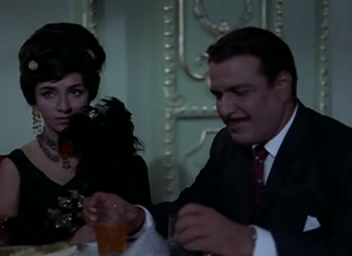 That is the end of Meena’s happiness. The next morning she receives a phone call—from whom, we don’t know, though it upsets her—and someone tries phoning her in the evening too, remaining silent when Kumar answers the phone. Something is definitely wrong. Kumar senses something’s not quite as it should be, when one evening Meena begs to be excused from accompaying him to the theatre; she says she’s ill. But when Kumar phones home from the theatre to ask how she’s feeling, the maid says Meena’s gone out.

—And Meena’s explanation, when Kumar meets her, is that she visited the doctor. Kumar, just by the way, phones the doctor to find out further details, and discovers that Meena never did visit him. Why is she lying? Where had she actually gone? The long and the short of it is that a suspicious Kumar pretends to go off to Poona for a few days, but instead dons a beard and trails his wife… 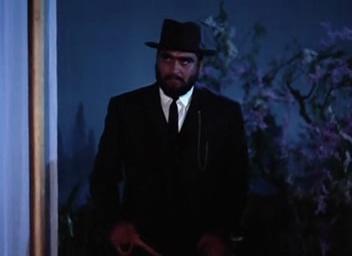 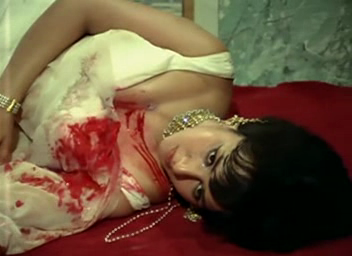 What on earth?! This is a very unusual twist, as anybody who’s seen enough Hindi films (where the hero and heroine are immune to anything close to death) will notice. But Meena really is dead, and what with Kumar having prowled around in that very conspicuous beard, it won’t be long before the police will be on his trail. But who really killed Meena? And why?

The cast, other than Vimmi (more on her later). The cast of Humraaz reads like a who’s-who of Hindi 60’s cinema (among those I haven’t yet got around to mentioning in my review are Balraj Sahni, Jagdish Raj, Nana Palsikar, Hari Shivdasani, S N Bannerjee, and Jeevan): loads of talent there.

The pace and the suspense. There are some very good twists and turns in this story, some swift and very surprising developments that I hadn’t seen coming the first time I saw Humraaz. And the pace is, through most of the film, very good; the songs are about the only concession made, and those I can forgive because they’re so good.

Vimmi. I can understand why she might have inspired Sahir Ludhianvi to write Kisi patthar ki moorat se: she looks like a stone statue, all right. Or a porcelain doll—with all the accompanying animation! Why on earth didn’t BR Chopra get himself a better actress? Someone like Sharmila Tagore, perhaps? (On the other hand, Sharmila Tagore being bumped off bloodily in the middle of a film may not be the best way to endear a lot of audiences. I can live with Vimmi being killed off, not Sharmila).

The unravelling of the crime. I won’t say much more about this, but from the moment the cop (played by Balraj Sahni) gets his hands on the case and begins solving it, there are conclusions drawn and statements passed that were either illogical or inconclusive or both. I got the idea that whoever wrote the script got themselves into a hole and didn’t know how to get out of it—so decided to rely on bombast. Which is probably why the cop makes one sweeping statement after another: some thinking over what he says, and I realised that most of it didn’t really follow.

Still, despite that, this is a thoroughly entertaining film. A good example of how to build up suspense, even if it isn’t one of how to show a crime being solved.

If only they’d used an actress better than Vimmi.