Several people who read my last post – which, as I’d mentioned, was an adaptation of a suspense novel, and in turn was remade in another language – guessed what this post would be all about. You were all kind enough to not let the cat out of the bag, but I guess you all got it right. The Hound of the Baskervilles, made in 1939 with Basil Rathbone as Sherlock Holmes, was remade in Hindi 23 years later, as Biswajit’s first Hindi film, Bees Saal Baad.

Obviously, where there’s a ‘bees saal baad’ (‘twenty years later’), there has to be a ‘bees saal pehle’ (‘twenty years earlier’) as a reference point. This takes us to a place called Chandangarh, which is ruled by a jagirdar (landowner). One night, with the lamps shining in the high-pillared mansion, the jagirdar hears the sound of ghungroos (ankle bells) in the tall grassland and swamp that adjoins his mansion. This seems to be something he’s heard before, because, with a determined look on his face, he sets off into the grasses, following the sound of those ghungroos.

He also carries a revolver with him. But it eventually proves useless – a creepy long-nailed hand comes out of the darkness, flinging itself on the jagirdar’s neck… goodbye, world. 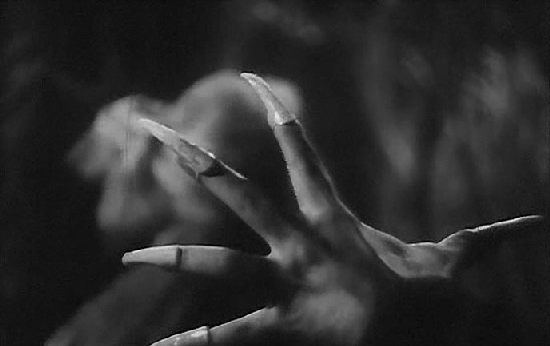 A man (whose face we never see, but who wears a pair of distinctive two-toned shoes) hauls the dead jagirdar off the ground, puts him into a horse-drawn carriage, and drives off.

Cut to bees saal baad. Twenty years later, and it’s another eerie night in Chandangarh. At the tiny railway station, a young man alights from a newly-arrived train. This is Kumar Vijay Singh (Biswajit), the new jagirdar of Chandangarh. He is met at the station by the local physician, Dr Pandey (Madan Puri). From Kumar’s words: “Dr Pandey! You’re still here?” and the fact that Dr Pandey wears a pair of two-toned shoes, it’s obvious this man’s been in Chandangarh a long while. 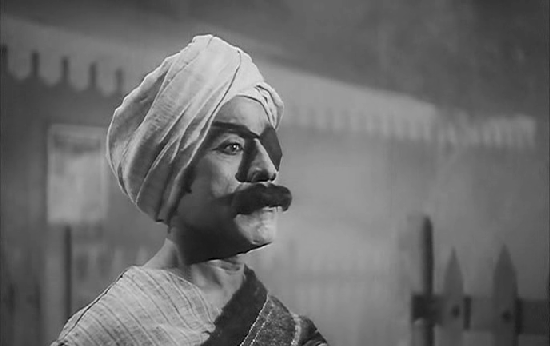 On the way to the mansion that Kumar’s inherited, Dr Pandey warns him against something equally sinister: a legend that surrounds Kumar’s ancestors. Every jagirdar who comes here is lured into the grasslands and swamp beyond, and is found murdered. Having spooked Kumar out sufficiently, Dr Pandey then cheerfully changes the topic and pulls into the mansion. 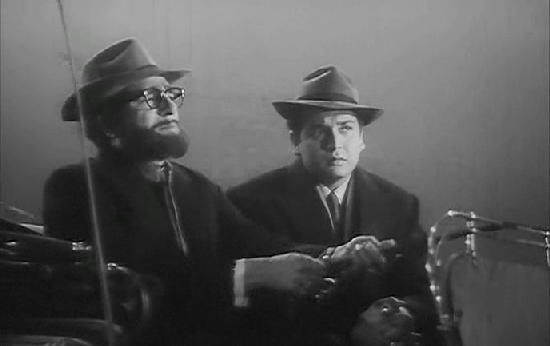 … where he introduces Kumar to the only servant in the rambling big place, Laxman (who is this actor? Dev Kishen?). Laxman seems like a cross between gloomy and dim-witted. He looks sideways at Kumar most of the time, makes ominous statements, and is generally a bit of a mystery. Or a nutcase. Or perhaps both. 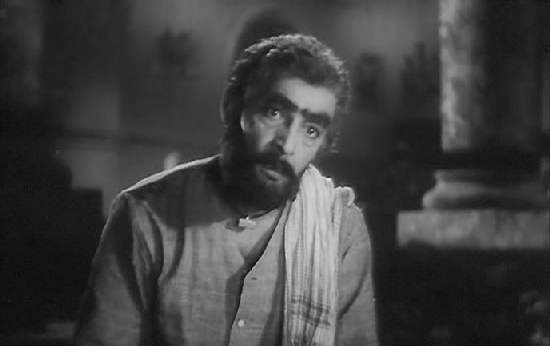 The mansion – which doesn’t even have electricity, and is lit by chandeliers (Shweta, here’s another for you, if you haven’t discovered it yet) and hanging candles – is eerie in the extreme. Every evening, Laxman goes about the place, lighting it up. And every evening, too, in the grasslands beyond, one can hear the sound of ghungroos. Things haven’t changed much in twenty years.
And, in the deep of the night, Kumar hears the sobbing of a woman – somewhere, perhaps, in the mansion itself, but he can’t figure out where. 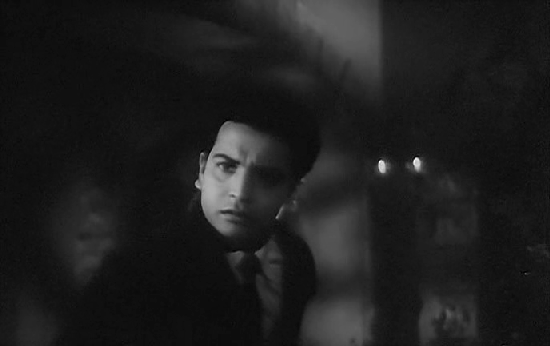 Soon, we are introduced to more characters.

With the coming of dawn, Chandangarh is transformed from a place of ghosts and weird legends to one of sunshine and cheer. For Kumar, the morning also brings an unexpected but immensely pleasing meeting – with the lovely village girl, Radha (Waheeda Rehman). He surprises her while she’s going about singing, and manages to convince her he’s deaf and blind and perhaps slow-witted too… until she realises he’s nothing of the sort, and runs off.

Radha is an orphan and lives with her uncle Ram Lal (Manmohan Krishna), who is the local vaid (physician) of the village. Ram Lal is very fond of her, and the interactions between uncle and niece are sweet. Playful, too, on her part; and indulgent on his. They also have a pet black cat, who miaows very persistently. 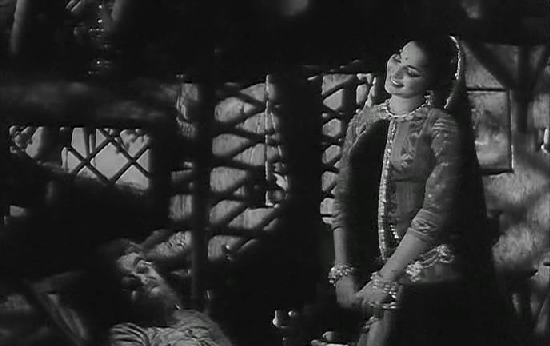 Radha and Kumar’s love story progresses swiftly and well. Radha, from being petulant and shy, soon deigns to smile prettily when he’s around, and even listens to him sing to her now and then (yes, if I had a man singing songs like those to me, I’d listen too). She also makes it quite obvious to her uncle Ram Lal that she thinks of Kumar as more than just the local jagirdar.

Anyway, back to the local characters, There’s Mohan Babu (Sajjan), who uses crutches and whose family supposedly once had a running feud with Kumar’s own family. Mohan Babu wants to heal that rift and be friends with Kumar. Kumar, however, is not inclined to like the man. 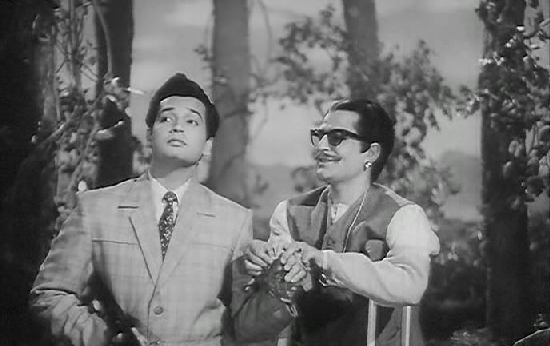 Perhaps with reason; though that must be all a case of intuition on Kumar’s part. When he’s on his own, in his own home, Mohan Babu’s persona undergoes a change. He seems to be an alcoholic and a debauch – besides being perfectly capable of walking around on his own two feet, without needing those crutches. And, as a servant, he’s got that one-eyed man from the railway station – but with both eyes obviously intact and functioning. 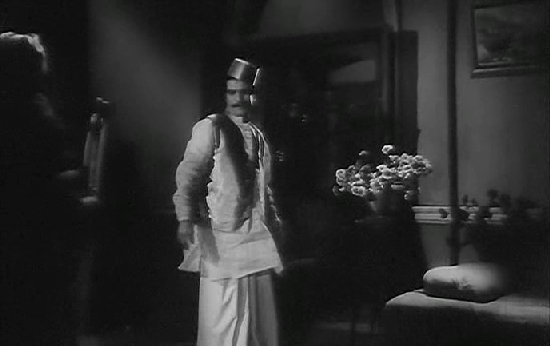 Lastly, there’s a new arrival on the scene. This is the comical detective, Gopichand (Asit Sen). Gopichand has come to Chandangarh attracted by the Rs 10,000 reward that has been announced for whoever is able to catch the murderers of the jagirdars of Chandangarh. Gopichand has big plans to interrogate everybody in the vicinity, and Kumar, taking pity on him, allows him to stay on in the mansion with Kumar.

…which enables Gopichand, one night, to see something very odd: the servant Laxman, going out onto the high terrace and swinging a lamp – and an answering light shining from the swamps. Gopichand tells Kumar about it, and both he and Kumar watch Laxman, but to no avail; it’s all pretty inexplicable.

Laxman, does, however, give Kumar one valuable piece of information: the origin of that curse on the jagirdars of Chandangarh. The story began with Kumar’s dadaji (paternal grandfather), who was a lecher of the first order. As soon as he took over the jagir of Chandangarh, he set about trying to seduce the local women, and one day kidnapped a girl. She managed to escape, but the jagirdar chased her into the surrounding grasslands and raped her, eventually killing her as well.

When the dead girl’s father, Radheshyam, arrived at the mansion, begging to have his daughter back, the dadaji had Radheshyam flogged to within an inch of his life.
The jagirdar was succeeded by his son (Kumar’s father) and he, in turn, by his younger brother, Kumar’s uncle, both of them good men who wanted to maintain amicable relations with the local villagers. Both were killed – lured out into the swamp by those ghungroos.

Now Kumar, besides hearing the sound of the ghungroos, has also begun hearing a beautiful voice, singing and beckoning him from the mansion out into the grasslands and swamp. And he has seen a fleeting glimpse of her…

Is it Kumar’s turn next? What is going on? Who is murdering the jagirdars of Chandangarh? Who is the mystery woman? Whom is Laxman signalling to? Why is ‘Mohan Babu’ going around in disguise? Did Dr Pandey murder that jagirdar twenty years earlier?

Watch. This is by no means a perfect mystery story, but it’s deliciously spooky in places, there are plenty of forehead-crinkling “Huh? What’s happening?” moments, and the revelation at the end is surprising enough for most tastes. Lots of juicy red herrings too.

What I liked about the film:

Read the last paragraph of that synopsis! Really, if you like Hindi suspense films, you mustn’t miss this one. It’s a classic, even though it does have its flaws.

The difference between night and day. The tall grass, the candle-lit mansion with that mysterious sobbing woman, the definitely odd Laxman… and the ghungroos (and later, that haunting voice singing in the night): no, night is not a time I’d have wanted to be the jagirdar of Chandangarh. But day is lovely, normal and beautiful countryside, with none of the unseen, lurking terrors of night. I thought that was a good contrast.

Waheeda Rehman, of course. Beautiful as ever, and such a great actress. She doesn’t have much of a role in this film, but she still does a good job as Radha, playful and affectionate with her uncle; initially crabby but later demurely in love with Kumar; and finally, scared out of her wits for the life of her love.

The usual faults I find in a lot of mystery/crime films. Plot holes. Why, for example, is it that Ram Lal, who’s touted as a great vaid and has been prescribing medicines for Mohan Babu’s ‘bad leg’, hasn’t realised that there’s nothing wrong with the leg at all? Either: (a) he’s a dud as a vaid, or (b) he’s in on Mohan Babu’s secret and is in league with him. Neither of which turns out to be true.

The falling flat of some details. Take, for instance, the recurring Kahin deep jale kahin dil. When a woman sings “piya der na kar, aa mil” (beloved, don’t be late; come, meet me), what do you assume? That she’s calling you to come to her? Hah. Fooled you!

Mohan Babu’s true identity – when revealed – is interesting, but what follows that is rather pointless. It made me think that his assuming the disguise of ‘Mohan Babu’ was just for the fun of it.

The fun part. How does Bees Saal Baad compare with The Hound of the Baskervilles?

There is, in my opinion, actually little to compare in the two films. Though everybody (me included) says that Bees Saal Baad is a remake of The Hound of the Baskervilles, the films are very different. True, they do share similarities: the debauched ancestor, whose debauchery has caused a curse to fall on the family; the mysterious murders of the lords of that land; the man in disguise; the woman who sobs in the night; and the servant who shines a light out into the wastelands.

Beyond that, though, this is a very different story. Bees Saal Baad is actually a very Hindi film. Everything one has come to expect of a Hindi film, regardless of genre – the comic side character, the songs, the romance between the hero and a heroine – are here, and in place. There is the drama. There is a little bit of melodrama. But the motive for the murders and the singing is vastly different; the detective is a clown, not a Sherlock Holmes, and there’s much more masala all around.

Even if you have seen The Hound of the Baskervilles and don’t want to watch what you think is a plagiarised version, I’d suggest you give Bees Saal Baad a try – at the most, I’d say it’s inspired. Not plagiarised.