My blog has featured Shammi Kapoor now and then – with reviews of some of his films, in my list of classic Hindi cinema’s handsomest men (which he topped, by a very long margin), and in various lists of songs.

Yesterday morning, when I woke up and logged on to the Internet, the first news headline I saw was that Shammi Kapoor had passed away. I have never been so affected by the passing away of one of the many stars of the past who have died in the recent past… but the news of Shammi Kapoor’s death brought tears to my eyes. I have a lump in my throat even as I type this.

I had not really intended to write this review now. I am in the midst of a blog project in which each post links to the previous and the next posts in some way or the other. But I could not ignore the passing of my favourite actor. I would never forgive myself for that. So, while this post does have a connection to the last (Humayun was a ‘raja-rani’ – ‘king-and-queen’ – film; so is Rajkumar), it is, first and foremost, a tribute to the brightest, most joyous and most entertaining star of the 60s. A sun that will never set.

Rajkumar is one of Shammi Kapoor’s classic films. It was released in 1964, the same year as another of Shammi Kapoor’s big hits, Kashmir ki Kali – and like the latter, it went on to be a very popular film, with Shammi his suave, irresistibly handsome self, paired opposite a lovely heroine, in a picturesque setting, with an entertaining storyline and a fabulous collection of songs. You couldn’t ask for a better package.

Here, Shammi plays Bhanu Pratap Singh, the elder son of the Maharaja (Prithviraj Kapoor) of a princely state. Bhanu Pratap has been studying abroad for the past ten years, and is only now returning. The maharaja is excited at the thought of finally seeing Bhanu again and cannot wait to announce that Bhanu will now be the Crown Prince.
Bhanu’s own mother has been dead many years now, and Maharani Kalavati (Manorama), the maharaja’s second wife, is nervous that Bhanu will balk at the idea of a step-mother.

… but that’s only for the benefit of the maharaja. The fact of the matter is that Kalavati wants the throne for her little son Chandrabhanu (?), and if Bhanu is declared the Crown Prince, that hope will go kaput. So Kalavati has been conspiring with her evil brother Narpat Singh (Pran), who also happens to be the senapati of the state. Narpat Singh, in private, assures his sister that the reception committee going to receive the prince as he arrives will make sure he gets an ‘appropriate’ reception.
We know what that means.

Fortunately for our hero, though, his old dai-ma (wet nurse), Padma (Achla Sachdev) has been keeping her eyes open and her ear to the ground. She knows what Kalavati and Narpat have been up to, but since she can’t tell the maharaja – it’ll break his heart – she has, instead, sent her son Kapil (Rajendranath) abroad, to warn Bhanu of what’s brewing here. Bhanu and Kapil have decided to put on an act: Bhanu will be the frivolous, stupid, insensitive prince while Kapil will be his equally idiotic professor friend. 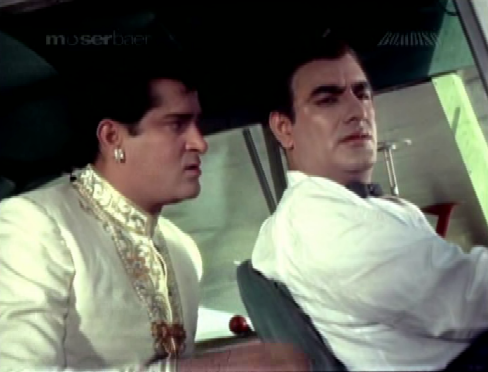 Forewarned is forearmed, and that too literally – so the newly arrived prince’s hidden armour (under his tunic) saves him from the bullet of one of Narpat’s hidden snipers…

…while Bhanu’s act soon convinces all and sundry that this ‘foreign-returned’ prince is totally unfit to rule. His favourite pet and friend seems to be a flea he carries around in a tiny plastic case; he is brash and lacks decorum; and he has no respect for the traditions of the land. He even makes what amounts to a pass at Princess Sangeeta (Sadhana), the daughter of the local tribal chieftain, when he meets her outside the tribal temple on the way to the palace. 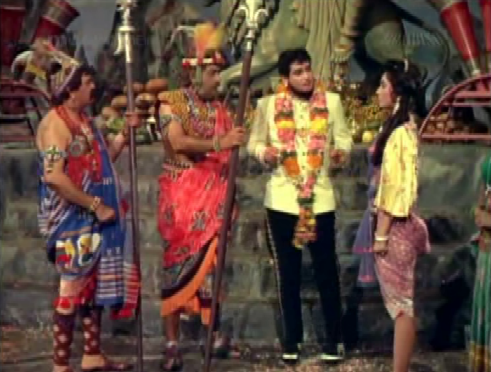 The only ones in the know are Kapil and Kapil’s mother, Padma. Padma is looking out for Bhanu; she even shows him a hidden passage that leads from his chambers into the countryside.
As for the others, it’s a different story. The most upset and disappointed of the lot is Bhanu’s own father, the maharaja, who realises that his son has come back a fop and a fribble, totally unfit to rule.
And when Bhanu, unable to bear his father’s misery any longer, tries to talk to him, Kalavati and Narpat Singh immediately turn up, preventing a private conversation. 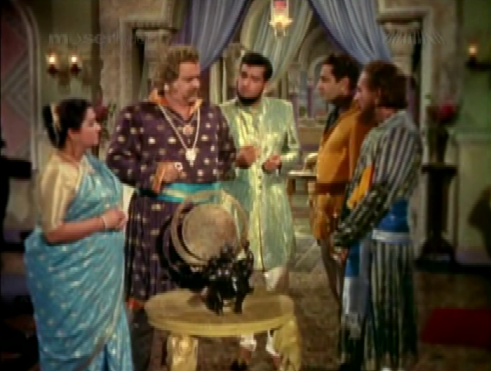 The evil brother and his ambitious but stupid sister aren’t going to let go so easily, either. After all, Narpat Singh’s actual goal is the throne for himself. So he’s now plotting with Bhimasaran (Om Prakash), a man who wants to be chieftain of Sangeeta’s tribe. Narpat Singh’s plot is convoluted, but the main goals are to kill off the maharaja and Bhanu (so that Narpat can then grab the throne); kill off Sangeeta’s father (so that Bhimasaran can be chieftain of the tribe); and marry Sangeeta (she is, after all, quite an eyeful).

They soon go into action. The maharaja is persuaded – mostly by the wise old diwan (Shivraj) to declare Bhanu the Crown Prince (“he will grow wiser and more circumspect if he is given responsibility”). To celebrate this occasion and offer thanks, Kalavati takes Bhanu off to a tiny private Kali temple. All very well – until Kalavati pretends to fall apart, telling Bhanu that she’s the daughter of a courtesan, not worthy to be queen, terrified of losing her beloved husband if he so much as gets a whiff of this terrible secret, blah blah… Bhanu ends up having to promise that he’ll never divulge the secret to anyone, and (how did this happen?) that he won’t even say that he was with Kalavati all this time.

Meanwhile, Sangeeta’s father receives visitors: a detachment of soldiers arrives at his hut. They say they’re Bhanu’s men, and have been sent to fetch Sangeeta, since the prince would like to have her company at the palace for the night. The chieftain is, of course, outraged and very insulted.
Even as he’s bellowing at the soldiers to go back to the palace, Narpat Singh, from the cover of the night and the surrounding forest, shoots the chieftain.

Poor Sangeeta comes running out to find her father dead. Bhimasaran, who had been (by design, though Sangeeta doesn’t know that) with her father at the time, tells her that Bhanu is the one who killed the chief. Our firebrand heroine, after a little mourning, takes her father’s corpse to the court, demanding justice.

The maharaja is shaken by Sangeeta’s accusation. Bhanu is summoned, and though he pleads not guilty, cannot account for where he was when Sangeeta’s father was killed (remember his vow to Kalavati? Now Bhanu realises she’s in on the plot too). So the maharaja is forced to confine Bhanu to his chambers in the palace, while the case is investigated. 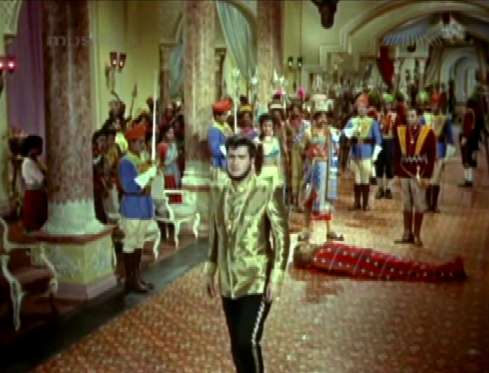 …but with Kapil and Padma’s help, Bhanu manages to escape. He runs off into the countryside, intent on finding evidence of Narpat’s duplicity.
Thus, when Sangeeta arrives at court, again demanding justice, the maharaja is forced to admit that his prisoner’s fled. And Sangeeta, breathing fire all the while, pledges that she will not rest until she has personally killed her father’s assassin – whom, of course, she believes to be Bhanu.

Shortly after, a sweet, funny and very likeable stranger named Bhagatram, whom she had recently saved from drowning, crosses paths with Sangeeta. It’s a matter of a few meetings (he rescues her, once after she falls off a horse, and once from a lecherous Narpat), and Sangeeta is head over heels in love with Bhagatram.

Will she ever realise that the man she loves more than life is the very man she has vowed to kill? (Well, she will realise, of course, but how soon? And under what circumstances?)

The somewhat gaudy, rather tasteless look of some of it. The costumes, for example, often look as if they were rented from a local nautanki theatre, and one without the benefit of a qualified costume designer too. And the choreography in some places – for instance, by the extras in Naach re mann badkamma, or when Sangeeta arrives at the palace when Bhanu’s being made Crown Prince – looks more like vigorous calisthenics than dancing.

What I liked about it:

…which can be forgiven for the fact that it’s compensated by a fast-paced and entertaining story (even if it has holes in the plot), some inspired music by Shankar-Jaikishan, and a gorgeous Sadhana.

He is Shammi here, the perfect entertainer. He is comical, emotional, utterly and irresistibly romantic. He rides hell-for-leather through the countryside and swings a sword expertly as he dodges assassins. He masquerades in many costumes and crazy disguises, as an Arab, a pandit, a sadhu. He is the uselessly foppish, Westernised Prince Bhanu Pratap. He is the real Bhanu, courageous and intelligent and capable, the man Padma dotes on and Kapil admires. He is the ‘bade bhaiya’ (elder brother) whom the innocent Chandrabhanu soon recognises as a loving and gentle man, a far cry from the madcap everybody believes him to be. And he is Bhagatram, the handsome, brave and mysterious stranger Sangeeta falls in love with. 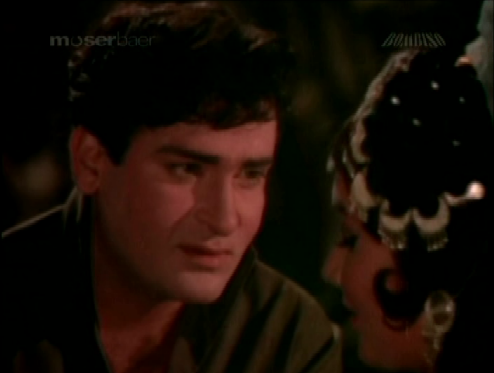 Rajkumar may not be a great film, but it’s a fine example of why I adore Shammi Kapoor so much, and always will. There is no other actor who could entertain me this way, who could turn a grey day into a sunny one by just one cheery song, one melting look from those wonderful eyes, one smile from the screen…

Goodnight, sweet prince; and flights of angels sing thee to thy rest.