Mumtaz, as I mentioned in my last post, was one of the best things that happened to Mere Sanam. She may not have had much screen time in the film, but she certainly left her mark – more than she’d been doing in the B-grade films she’d mostly appeared in till then.
Rustom-e-Hind, made in the same year as Mere Sanam, is an example of that type of film. It’s basically a Dara Singh showcase – so there’s lots of showing off of wrestling – but Mumtaz gets to smile prettily and flutter her eyelashes, if nothing else. 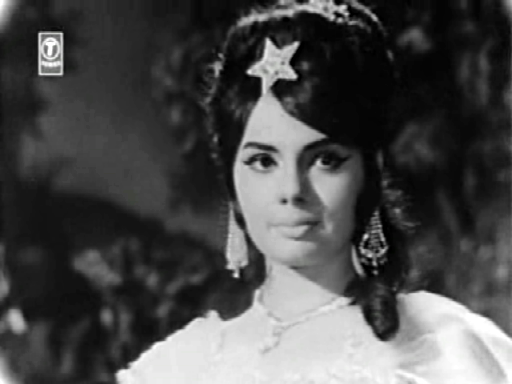 This one’s a complicated story, and it doesn’t have all its parts in place, but let’s begin.
Ranjit (Dara Singh) is a country bumpkin. A very strong, well-muscled country bumpkin, but a simple-hearted villager nevertheless. Shortly after he’s knocked out a lecher who was pawing a village dancer, Ranjit is told by some frantic villagers that his mother (Mridula Rani) has been injured by a falling tree, and is dying. Ranjit rushes back to weep over his mum, and she tells him what he’s been yearning to know all his life… 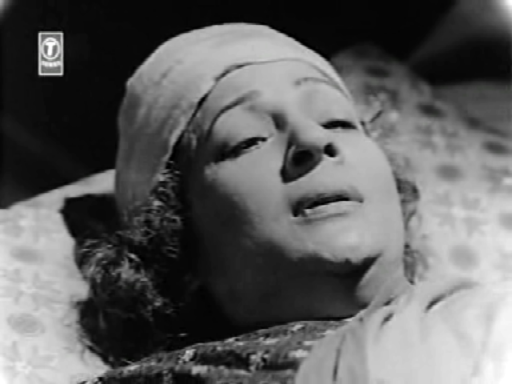 …who his father is. [He still doesn’t get to know, actually, but what the heck]. It turns out that Ranjit’s father was misled by some unnamed individuals into believing his wife unfaithful – this when she was pregnant with Ranjit. Ranjit’s father turned her out of the house, and since then, she’s been living in this village, where Ranjit has been born and brought up.

Ranjiy vows to take revenge against his heartless pa – but where is he to be found? The dying old lady only has time to gasp out, “Phool Haveli. Balrampur,” before she cops it.  Ranjit now has an idea of where he should go to search for his father, but he doesn’t know his father’s name. [Thankfully, though, he does know his dead mother’s name: Parvati].

So Ranjit sets off for Balrampur, on the way thrashing various villains and rescuing their hapless victims. One of these victims is Ustad Puran (KN Singh), who happens to be a big shot in Balrampur. Ustad Puran is very grateful and even takes Ranjit home, so that both Puran and his wife Laxmi (Praveen Paul) can personally thank this man who saved Puran’s life.

En route to Balrampur, Ranjit also stops by to repair the broken carriage of Padmavati (Mumtaz), the princess of Balrampur, who has been out driving through the jungle with her maid. Where Puran had been merely very grateful, Padma is more than grateful, and quickly falls in love with Ranjit. 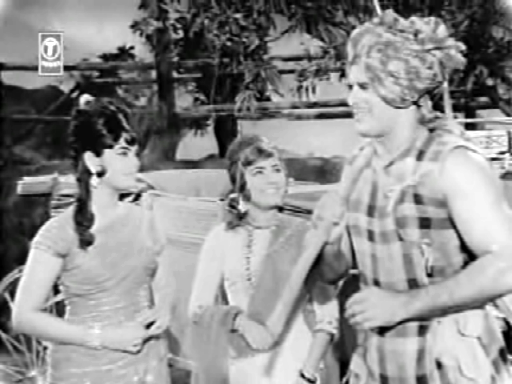 This is where things began to go very haywire for me. The scenes switched faster than I could keep track of them, and I ended up spending the next hour or so of the film rather lost. So, instead of a synopsis, a quick gist of who loves who, who hates who, and who has what up their sleeve.

The king, Padma’s father (Munshi Munaqqa?). He is a bit of an oddball – he prances around like something out of a cartoon strip, makes faces and generally acts the idiot, but seems well-respected and pretty much in command of what’s going on in his kingdom. He has declared that at a certain festival in the offing, the champion who wins all the tournaments will be declared the ‘Rustom-e-Hind’.
[And yes, he is rather more admiring of Ranjit’s ‘tallness and handsomeness’ than one would expect in a male character from a 60s’ Hindi film.]

There is the king’s newly-appointed senapati (commander-in-chief), Bhimsen (Shyam Kumar). Bhimsen:
(a) Is the son of Ustad Puran and Laxmi
(b) Is evil. He has had at least three or four people already killed
(c) Lusts after Padma and gets on her nerves with his constant lechery
(d) Is in cahoots with an equally evil partner called Vikram (Rajan Haksar) 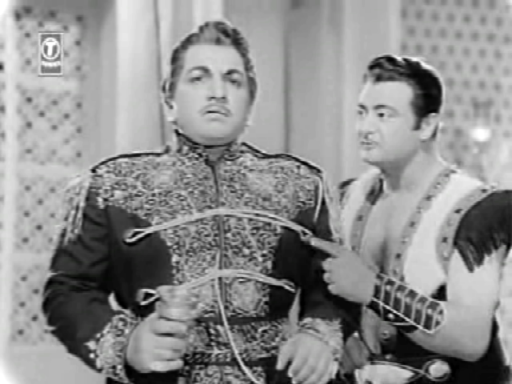 (e)… and has a buffoonish, stuttering servant called Madho (Maruti) – who is sweet on Padma’s maid, Jharna (?). Jharna herself would much rather encourage the attentions of Mohan (Mohan Choti), who is Padma’s coachvaan (coach driver), and is very much in love with Jharna. 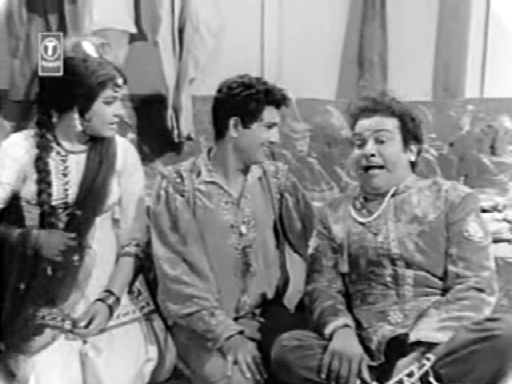 … and Madho, anyway, is being assiduously pursued by a maid (Tuntun) who works at Ustad Puran and Laxmi’s house.

Into this hotchpotch of characters comes Ranjit, asking around for Phool Haveli. His initial enquiries are greeted with universal hoots of laughter, but after a while, he is taken to Phool Haveli – and discovers that it is a brothel. Besides a couple of good song-and-dance sequences (one picturised on Helen, the other on Laxmi Chhaya), we don’t get to see much of the seamy side of Phool Haveli.

It does emerge, though, that Bhimsen and his crony Vikram, along with their attendant gangs of hoodlums, frequent Phool Haveli, and have been trying to carry off one of the girls, much against the wishes of the madam. Ranjit, blundering in on one of these attempts, rescues the girl and puts the villains to rout. The madam is grateful, but not enough to let a now-desperate Ranjit know who the owner of Phool Haveli is.

Ranjit is tenacious, though, and tries to surreptitiously find out more. He comes, disguised as an Arab, to Phool Haveli – and runs into an old acquaintance: Ustad Puran, who has found out that Bhimsen has been pestering the girls of Phool Haveli.
In the course of their conversation (Ranjit reveals his identity soon enough), Ranjit says that he’s looking for his father. He tells Ustad Puran what his dying mother had said and, on being asked, tells Ustad Puran his dead mum’s name – and Ustad Puran looks stricken. [Yes, I can guess where this leading]. 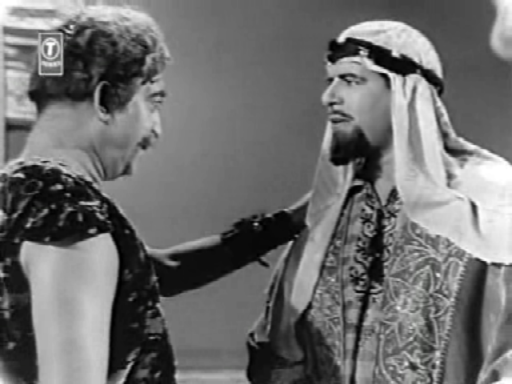 All Ustad Puran does is to tell Ranjit that he, Ustad Puran, knows Ranjit’s father well. He will introduce Ranjit to him someday soon. Then Ranjit can take revenge for the shabby way in which his pa had treated his mother.

Somewhere along the way, a few more events take place:

(a) The king appoints Ranjit Padma’s coachvaan, which allows Ranjit and Padma to spend lots of time together, falling more and more deeply in love; 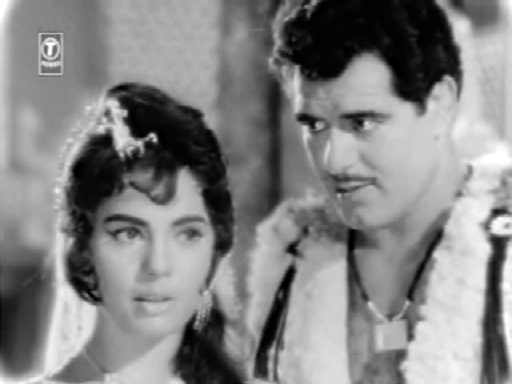 (b) Ranjit inadvertently comes to know that Bhimsen – Ustad Puran’s son and the senapati – has been responsible for several murders, besides trying to get girls from Phool Haveli. Ranjit tells Ustad Puran this, but while Ustad Puran (who has anyway been telling Bhimsen to mend his ways) is thoughtful, Ustad Puran’s wife Laxmi is outraged, and tells Ranjit in no uncertain terms that he’s a dimwit who’s got his facts all wrong.

What next? Who is Ranjit’s missing father? [If you’ve seen even half a dozen old Hindi raja-rani films, this is one question to which you will almost certainly know the answer]. Will Bhimsen ever get his just desserts? Will Ustad Puran and Laxmi get around to acknowledging that Bhimsen is not the goodie-two-shoes they imagine him to be? Who will be declared the Rustom-e-Hind? [Yes, well. That is sort of obvious, too].

Mumtaz! Okay, I said this before, in my last review, but I’ll say it again: I adore Mumtaz. She’s so alive and vivacious and lovely. She doesn’t have much to do here except look pretty and occasionally give Bhimsen the set-down he deserves, but still: she’s a pleasure to watch. 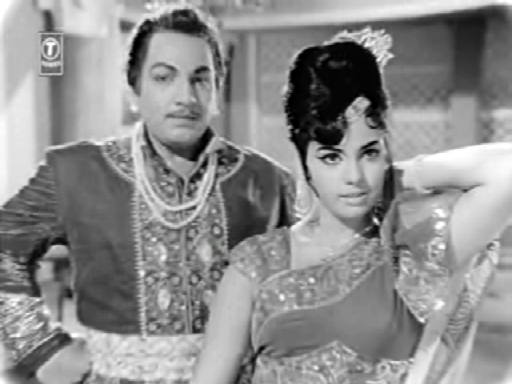 Dara Singh. I have to admit, I don’t recall watching any old Dara Singh films before this one, and I was a little wary of this because I’m not too keen on endless bouts of wrestling. While Ranjit was not typical ‘hero’ material (lots of brawn, but very little brain), he was endearing in a sweetly-lumbering-giant way. And while I’m not a fan of Hindi spoken with a broad Punjabi accent, his accent was cute enough to be quite forgivable.

A lot of the songs. The music of Rustom-e-Hind is by Hansraj Bahl (a much underrated music director, even though he composed some wonderful songs). Among my favourite songs is Rajaji tore raaj mein, Nazar meri badhi idhar se [now that, if I’d only heard it and not seen it, wouldn’t be a song I’d at all associate with a historical raja-rani film!], and Mere pehloo mein aake baitho. Interestingly, one of the three people who are onscreen singing Ek Majnun thha jahaan mein… rakh lo khidmat mein is Tuntun – I wish Bahl had given her a comeback song and revived the all-singing Uma Devi for our listening pleasure (the female voice was Minoo Purushottam’s).

After a somewhat promising start, the story went all over the place. There were too many people, with too many subplots devoted to each one of them, and with not enough actually interesting happening to them anyway to merit those long and rather tedious scenes. For example, Mohan’s father (a wrestler) and his uncle (also a wrestler) are constantly trying to bulldoze Mohan into getting them high office at court; entire scenes are devoted – repetitively – to this. Ditto for:

All repeated with very little imagination, again and again, with very little room for anything else. Except, of course, the songs and the many bouts of wrestling – the latter, too, getting on my nerves after the first couple of bouts.

By the way, if you want to know the back story – why a seemingly good man like Ustad Puran threw poor, innocent Parvati out; who (and why?) instigated him in the first place; why he later realises Parvati’s innocence, and how Bhimsen is finally punished – don’t bother seeing this film, because the scriptwriter seems to have been too exhausted by the end to bother to deal with all of that.

Rustom-e-Hind would have benefited from a much better script. The story isn’t bad in its basics; but it falls down badly in its execution. Sad.

And Maruti’s act as the stuttering Madho? Not funny at all.

On the other hand: don’t these two look charming together?