It seems a bit of a paradox that Tumsa Nahin Dekha was both good and bad for Shammi Kapoor. Good, because it turned him from a wannabe to a big star. Bad, because it created a certain persona – the fun-loving, completely madcap yet good at heart rebel.
Bad? Was that ‘bad’?

I think so. In film after film, Shammi Kapoor ended up doing pretty similar roles. (Even the films had similar names: Junglee, Jaanwar, Budtameez, Bluffmaster…). You wouldn’t expect a Raj Kapoor, a Dilip Kumar or a Rajendra Kumar to debase themselves by making faces and leaping about like Shammi Kapoor was willing – even eager – to do. The result? Shammi Kapoor got typecast. ‘India’s Elvis Presley’, ‘the rebellious star’, the man who could dance and sing and do comic scenes and romances. But if emotion was needed, directors turned to other stars.

So, when I decided I wanted to do a list of my ten favourite Shammi roles, I began to pick out films in which one can see glimpses of what a fine actor this man actually was. Roles that allowed Shammi Kapoor, even if he was prancing about and singing in places, to show off his skill as a thespian. 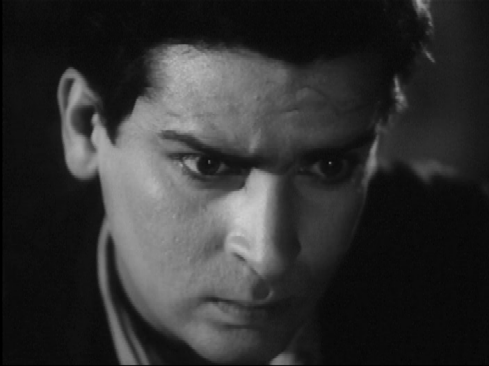 Here goes, with my favourites bunched at the top, but otherwise not in any particular order:

1. Pritam/Professor Khanna (Professor, 1962): Although I said this list was in no order, if I had to name my favourite Shammi Kapoor role, it would be this one. In Professor, he plays a young man forced by poverty, unemployment, and his mother’s illness, to pretend to be an old man. There’s romance, comedy and melodrama, but what makes this a far better film than the many others in which Shammiji dons disguises (even if for only brief periods) is that here his young and handsome avatar actually doesn’t merely wear a beard, wig, glasses and shapeless coat, but becomes the wiser, more mature person he’s pretending to be.

As Professor Khanna, he’s understanding, astute, experienced. As Pritam, the young man he actually is, he’s cheerful, flirtatious – yet with a core of integrity. Superb characterisation, yes; but, more than that, excellent acting. And that doesn’t just include the harrumphing and the slightly wonky walk, but the expressions: the sympathy for a frustrated old maid, the embarrassment at being faced with a strange – and possibly unclothed – woman; the anger at a man who’s jilted a pregnant lover…
The role got Shammi Kapoor a Filmfare Award nomination for Best Actor.

2. Brahmachari (Brahmachari, 1968): This is the role that did win Shammi Kapoor a Filmfare Best Actor Award (he beat – quite a feat, this – the stalwart Dilip Kumar’s performances in Aadmi and Sangharsh). In Brahmachari, Shammi Kapoor acts in the title role as a man who, having experienced firsthand what it means to be an orphan, turns his own house into a loving home for unwanted, homeless and orphaned children. In the process, he comes to the brink of bankruptcy – and ends up having to choose between romantic love and his love for the children he now loves so deeply.

If you’ve only ever seen Shammi Kapoor in a ‘Yahoo!’ role, you have to watch this film to see him really act. You can see his affection for the children (and it’s not just the syrupy sweetness of most films; he’s also a disciplinarian and a pal to the kids). You can sense his pain and anger at his own helplessness and poverty. You can spot the moment when he begins falling in love with the girl he’s unwittingly rescued from committing suicide. And you know that this is a man who’s seen a lot of suffering in his life – enough to make him a champion of those who are unloved and unwanted. Fantastic acting.

3. Shekhar (Junglee, 1961): Some of Shammi Kapoor’s best roles seem to be the ones where he acts in two contrasting styles. Here, he’s a gruff, surly young man who’s been brought up to believe that love, joy and other ‘childish’ emotions are not worthy of a family as distinguished as his. Shekhar, however, is changed – almost overnight – by the love of a girl, and ends up the exact opposite of what he started off. The contrast in characters is well enacted; but what really endears Shammi Kapoor to me in Junglee is his portrayal of a man in love. His expressions – those eyes filled with tenderness, that face brimming with love – never fail to make me go all weak-kneed. 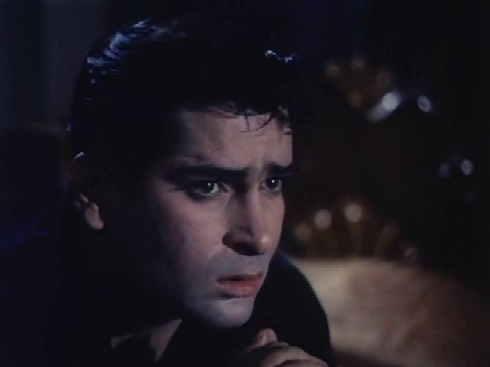 4. Mike/Shekhar (China Town, 1962): Like Professor or Junglee, this was a film that required Shammi Kapoor to act in two very different styles. But this, unlike Professor or Junglee, was not about a man who changes, but about two men – one of the few double roles Shammi Kapoor took on (Mujrim was another, but the second role in that lasts just a few minutes). And, oh. How good Shammi Kapoor is in China Town. On the one hand, he’s the suave, ruthless and unscrupulous Mike, the boss of China Town’s seedy underworld – an opium addict, violent, and suspicious. On the other hand, Shammi Kapoor is also Mike’s identical twin Shekhar, brought up by a loving mother. A clownish young man, a die-hard romantic, yet brave and resourceful when it’s needed. While Shekhar is the more usual Shammi Kapoor hero one sees in his films, Mike is the more interesting – and a fine example of Shammiji’s ability to act. 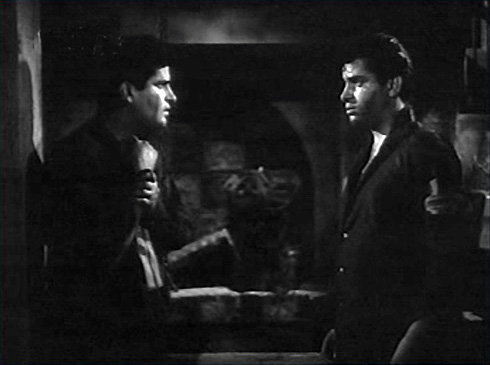 5. Anil/Rocky (Teesri Manzil, 1966): Yes, the leaping about and the romancing of an unwilling heroine are there, but there’s also a fantastic suspense drama in which our hero, Rocky aka Anil, finds himself caught. A supposed suicide re-emerges as murder; a dancer dies in Rocky’s arms, killed by a bullet meant for him… and another woman tries to send Rocky to a sure death in a car with faulty brakes. Who is the culprit? And why? Teesri Manzil is a gripping thriller, and gives Shammi Kapoor the chance to show off some good acting: a man, initially merely puzzled, then perplexed, finally hunted down outright and unsure whom to trust. And, finally, that moment when he realises the truth.
Dev Anand was initially to have played Rocky. I personally cannot imagine anybody playing the role with more élan than Shammi Kapoor did. He’s perfect. 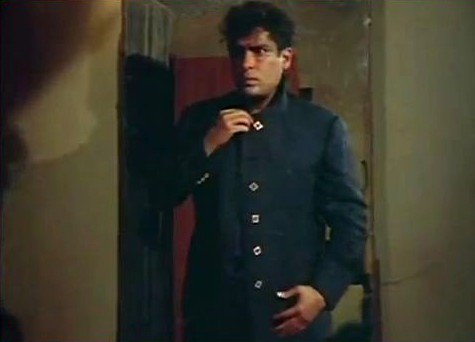 6. Ravi (Andaaz, 1971): This film is one of Shammi Kapoor’s last as a leading man – and what a good role he had. Here, a middle-aged Shammi Kapoor gets to play a man his age: as the widowed father of a small girl. Ravi finds hope and love again in the shape of a widow (played by Hema Malini), who is the mother of a small boy. This is a love story that’s beautifully played out: none of that crazy leaping about, none of that relentless pursuit that marked much of Shammi’s career as a hero. Here, he’s a sensitive, mature man who is all warmth for his daughter; who understands the painful memories that haunt his beloved; and who has the patience – and the willpower – to finally take what life brings him: another chance at love. A great role, and superbly played.

7. Shankar (Tumsa Nahin Dekha, 1957): An important role, not because I think it’s a meaty one, but because it marked a watershed in Shammi Kapoor’s career. If you’ve seen Shammi Kapoor in earlier films like Shama Parwana or Rail ka Dibba, you’ll know what I mean: sensitive, run-of-the-mill hero, pretty much cast in the same sort of mould as elder brother Raj Kapoor. Tumsa Nahin Dekha showed the world that a Shammi Kapoor who’d broken out of that mould was unbeatable. He was hilarious, romantic, heroic, a prankster, a dab hand at dancing or singing or fighting, yet noble and good always – he was Shammi.

8. Raja/Roop (Dil Deke Dekho, 1959): Similar in style to Tumsa Nahin Dekha, but with an even more irresistible Shammi Kapoor. This is one of those typical ‘Shammi Kapoor roles’: the kind of role that wannabes like Joy Mukherjee, Biswajit and Feroz Khan tried to play in so many films, but managed with only limited success most of the time. But Shammi Kapoor, as the long-lost son who falls in love with the foster daughter of his long-lost parent, fits the role to a T. He’s urbane, charming, and completely inimitable. Another film I’ve seen repeatedly, just for Shammi Kapoor, who dominates the screen. 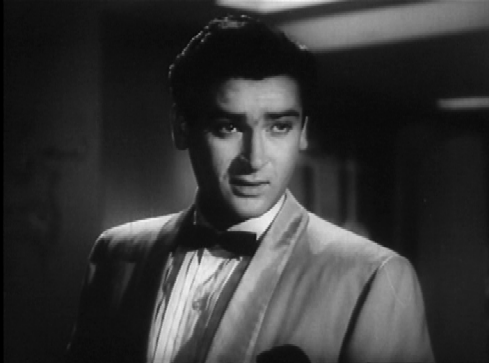 9. Prince Bhanu Pratap Singh/Bhagatram (Rajkumar, 1964): My main complaint about this film is with the gaudiness and general ghastliness of the costumes and set design. But Shammi Kapoor redeems it, in somewhat Scarlet Pimpernel style. On the one hand, he’s the foppish, Westernised Prince Bhanu Pratap Singh, who seems to have no regard for tradition, no respect for his elders, and little to do except preen himself. In reality, though, he’s the smart, brave and highly principled Bhanu, who doesn’t just foil the evil plans of the enemy, but also manages to win the heart of an inimical princess. Shammi at his swashbuckling – and meltingly handsome – best.

10. Shankar/Anand (Mujrim, 1958): Although Mujrim ends with an over the top melodramatic speech by Shammi Kapoor, the film offers him the opportunity to do a somewhat anti-hero role (à la Dev Anand in Jaal, Pocketmaar, Kaala Bazaar, Guide, etc). Not totally Dev Anand style, of course, since the whole point of having Shammi Kapoor as a hero is to allow lots of songs, romance, and some comedy. But yes, there are definitely darker shades in his character here as an orphan brought up by a thief, to live his life forever as a thief. Shammi Kapoor also has a very brief (but significant) cameo as a dying playwright, Anand, but it’s as the bitter and tormented criminal Shankar that he excels.

What are your favourite Shammi Kapoor roles?

57 thoughts on “Ten of my favourite Shammi Kapoor roles”