The first time I watched this film was on TV, back in the mid-80s. Luckily enough, our TV was hooked up to a VCR, and a blank tape was in the VCR – so we recorded Professor. I loved the film so much, I rewatched that tape again and again over the next 15 years. By that time, VCDs had come to India and I’d just gotten married. My husband and I bought a VCD player. And guess which was the first VCD I bought?

Now I have the DVD, and I have seen Professor so many times that I know each scene. I remember a lot of the dialogues, and I still love the film as much as I did way back then the first time, as a starry-eyed, Shammi Kapoor-loving 12 year old.

Pritam Khanna (Shammi Kapoor) is a graduate, but despite a good academic record (and much effort), hasn’t been able to get a job. His ex-professor at college is sympathetic, and has been trying to help Pritam in his search. The latest application, for a tutor in Darjeeling, has been sent back by the prospective employer Seeta Devi, who makes it clear that while she acknowledges Professor Khanna’s credentials, she would want to employ him only if he’s over 50 years old. Eccentric old so-and-so. 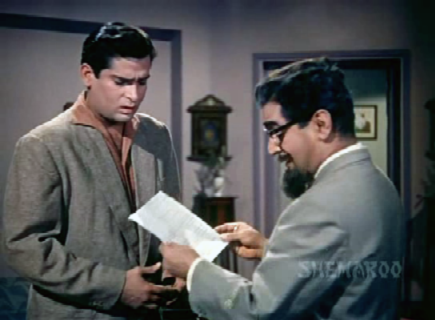 That’s another hope gone down the drain. A dejected Pritam goes home to his widowed mother (Protima Devi).

They’re down to their last handful of rice – though mum doesn’t let Pritam know that. Then, a sudden, terrible fit of coughing makes her collapse. Pritam rushes off to his friend the professor to borrow some money (after all, where there’s a doctor, there will be a fee). The professor lends him the money, and hands over a regretful letter for Seeta Devi, requesting Pritam to read through it before posting it.
The doctor has bad news for Pritam: his mother’s got tuberculosis. But the good news is, she can be cured. All it needs is a stint in a good sanatorium.

Pritam’s joblessness, their poverty, and his mother’s potentially fatal illness act as inspiration. Seeta Devi wants an elderly professor? All right, she’ll get an elderly professor! Having admitted mum to a sanatorium in Siliguri, Pritam disguises himself – with the aid of a fake beard, greying wig and droopy moustache; shapeless coat; specs and a walking stick – and presents himself at Seeta Devi’s grand mansion in Darjeeling.
Seeta Devi (Lalita Pawar) is a harridan who immediately subjects him to a rigorous cross-questioning.

Pritam’s extempore answers quickly land him in trouble – when she wonders why his face is free of wrinkles despite his age, he puts it down to yoga, and on being asked which yogi he learnt from, he says none; he learnt from the yoga shastras. Seeta Devi latches on to the fact that the yoga shastras are all written in Sanskrit; so does Professor Khanna know Sanskrit, too? Yes, oh yes (he knows zilch).
Very well, says Seeta Devi. Professor Khanna, besides his main job – which is to tutor her two young nephews – can also teach her nieces Sanskrit.

The nieces in question are Neena (Kalpana) and Rita (Praveen Choudhary). They’ve been looking on, irritated but too scared to speak up, while their education is being decided for them. Neither is keen on learning Sanskrit (yes; I can understand that. I remember rejoicing the year I finally could stop studying Sanskrit in school!). In whispers, they agree that they aren’t going to stand for this – they must do something to get rid of the Professor ASAP.

Which they attempt through a couple of pranks, tailored to show up poor Professor Sahib as a lecherous and irresponsible character, not at all suitable for teaching any kin of Seeta Devi’s. Fortunately, our hero is able to retrieve himself from the situation the first time, when Neena and Rita trick him into entering the cottage of the belligerent servant Hanuman Singh (Rashid Khan), just as Hanuman Singh’s wife (Bela Bose) has emerged, all wet-haired and towel-clad, from a bath… 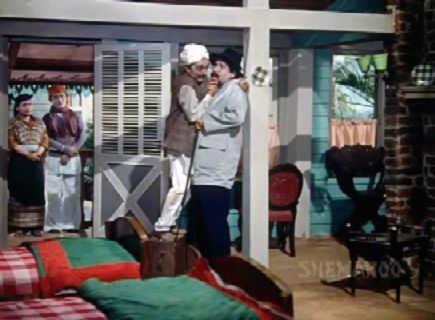 The second time, though, Pritam cannot resist the temptation to join the girls and their friends in a boisterous song-and-dance – just as Seeta Devi arrives. Pritam is dismissed but again escapes by the skin of his teeth: Seeta Devi overhears Neena and Rita congratulating each other on having succeeded in getting Professor Khanna fired. Seeta Devi promptly hires him again – and Neena tells the Professor, when her aunt’s gone, that she won’t stand for it. She’ll make sure he’s out.

We’re also given a glimpse, in the meantime, of just how much of a disciplinarian Seeta Devi is. It turns out that Neena, Rita and their two little brothers are the children of Seeta Devi’s brother and his wife, both of whom were killed in a plane crash six months earlier. This clutch of orphans has been uprooted from Bombay – where they were studying – and has been brought to Darjeeling to be under the eagle eye of Seeta Devi.

She supervises what they consume (lots of salad and barley water), what they wear (no fancy Western clothes for the girls), where they go, and what they do. No wonder Neena refers to her as a ‘dictator’ and a ‘jallaad’ (literally, someone who flogs another). Life is very hard for them all, and Pritam soon begins to feel very sorry for the siblings.
It does not, however, prevent him from deciding to give Neena a taste of her own medicine. She’s promised him she’ll make him – the Professor – weep. 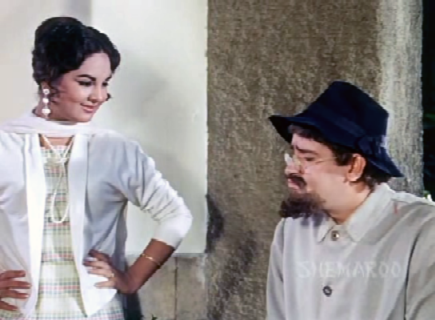 … so, he’ll return the favour.
Which he does by appearing before her (in his absolutely gorgeous self! – honestly, her eyes widen and she looks half-dazed when she comes face to face with him the first time!)

He runs into her at the tailor’s in Darjeeling, and takes advantage of the fact that her dupatta inadvertently gets entangled in his jacket. It becomes a good excuse to get talking – Neena threatens and then pleads when she realises he has little intention of returning her dupatta, and it ends with him getting her to write him a short note thanking him for the return of her dupatta. A receipt, he says. Neena fumes, but there’s little she can do.

…and before she quite knows it, Neena’s fallen in love with a man whom she only knows by name. Pritam’s plan to have his revenge on Neena has misfired, of course, and he’s as much in love with her as she is with him.
Neither of them knows, at this point, that Rita has also fallen in love – with a wealthy young rake named Ramesh (Salim Khan).

In the meantime, Pritam (in his avatar as the Professor) has been doing his bit to try and patch up the differences between Seeta Devi and her nieces. This results in him doing a lot of desperate ad-libbing whenever Seeta Devi summons him to her office for an interrogation:

And soon enough, Seeta Devi’s façade – at least as far as the Professor is concerned – is cracking too. It’s not long before Seeta Devi is singing Prem nagar mein banaaoongi ghar main, has begun dyeing her hair, and has changed her very austere, almost uniform-looking saris for rich, zari-embroidered ones.

In the midst of this, Seeta Devi has to ask the Professor for a favour: could he go to Bombay on their behalf? Neena’s parents’ property has to be made over to Neena, for which the paperwork needs to be completed. Seeta Devi and Neena will also come down to Bombay after a few days… which is all the incentive the Professor needs to agree. But in Bombay, he’d rather spend his time meeting Neena. So Pritam – masquerading as the Professor’s nephew – turns up to greet the ladies when they finally arrive in Bombay. 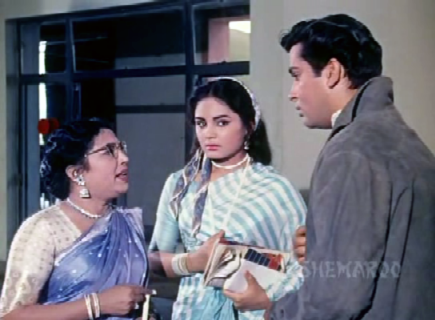 What ensues is a mad whirl of activity as our hero romances his girl, runs around like mad changing from the Professor to Pritam to back again – and makes the very disturbing discovery that Seeta Devi has fallen in love with him.

What now? How long can Pritam maintain this charade? Where will it end? How will he account to Neena – and worse, to Seeta Devi, who sees in the Professor her hope for finally getting married?

An amazingly entertaining film, and highly recommended if you are a Shammi Kapoor fan. (Notice that this is the last of his films I’ve reviewed in this special week? The film I’ve kept for the end? That’s because it’s my favourite of all his films. Unbeatable).

Oh, everything. But if I were to list the top stuff, it would have to be:

Shammi Kapoor. Of course. He’s his usual entertaining, charismatic and gorgeous self – the Shammi Kapoor who ruled the 60s – but he also gets to show off just what a fine actor he is. (He got a Filmfare Best Actor Nomination for the role, by the way). As a man forced by circumstances to adopt a disguise, he acts in many different styles. As Pritam, he is the heartbreakingly handsome young man, light-hearted and romantic, occasionally clownish, who flirts with Neena, falls in love with her, and ends up juggling identities madly to keep everybody happy. 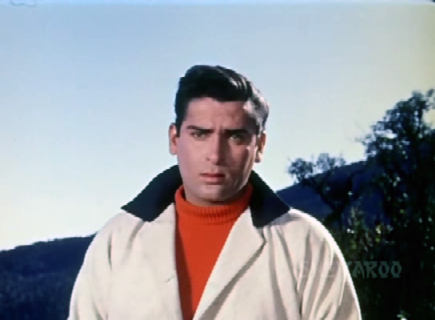 As Professor Khanna, he is actually a different man altogether – not just in his slower, gruffer speech or his limp and facial hair, but also in his attitude towards life. He is a wiser man, more circumspect and mature (see the way he tries to reason with Neena and Rita when they’re being anti-Auntie, or the way he tells Seeta Devi that she is being too harsh) – he really projects an image of an older, more experienced man than the madcap Pritam is. And there’s another Pritam – the good, respectful young man who is Professor Khanna’s dependable nephew, the man who impresses Seeta Devi so much that even she is kindly disposed towards him. Very good acting, this, supported by a good script and dialogue. 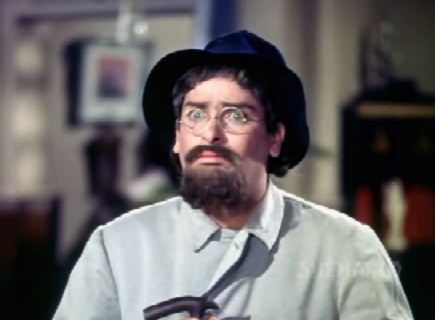 The scripting. (The story, by the way, was by Shashi Bhushan; the screenplay and dialogue by the stalwart Abrar Alvi). It’s a fairly simple story, but so well written that the characters and situations get a chance to evolve, instead of getting bogged down under silly comic sub-plots and unnecessary villainy. We see how Seeta Devi goes from being a nasty old harridan to a starry-eyed woman in love with an elderly professor. It doesn’t happen overnight.

(I also like the fact that – unlike in a lot of other Hindi films I’ve seen – both women who come in relatively frequent contact with Pritam and Professor Khanna, Seeta Devi and Neena – are immediately struck by the resemblance between the two men). Too many other disguised heroes seem to disappear completely behind thoroughly inadequate disguises, even for women who are in love with them.

The very last scene. It’s a little too melodramatic for my taste – and there’s too sudden a change of heart, there.

But otherwise? Top notch entertainment, and not to be missed. I know; I’ve seen it often enough.