I don’t often need to take a taxi to get around, but when I do, I always steel myself, because 9 times out of 10, the taxi driver will have music playing—a CD or a radio—and 99% of the time, it’ll be some completely vile stuff with just a monotonous beat, and no melody to speak of.
Last Friday, I had to take a taxi (for a longish ride, moreover—Delhi to Gurgaon and back, nearly 2 hours in the taxi). Sure enough, the radio was turned on. And what a pleasant surprise!—this driver had tuned into a radio channel that seemed to play only old Hindi film songs.

Those two hours were total bliss, and I was reinforced in my belief that good music can make a long and otherwise boring car journey also pleasurable.

So, a list of my favourite car songs. These are all from pre-70s films I’ve seen; other than that, I’ve also stuck to these rules:

(a) The song is sung by someone sitting in (or on) the car. Which is why Yeh dil na hota bechaara doesn’t figure in this list. There may be other singers—not in the car—joining in, but the primary singer(s) is/are in the car.
(b) The singer(s) spend at least 80% of the duration of the song in or on the car.
(c) These are only car songs, not jeep songs. The latter merit a post of their own.

Here we go. These are in no particular order:

1. Kisi na kisi se kabhi na kabhi (Kashmir ki Kali, 1964): This song comes first on my list for the simple reason that this was the first song that I heard when I climbed into the taxi the other day, and I was struck by the fact that I was listening to a car song while travelling in a car.
Shammi Kapoor—who I think did at least one ‘mode of transport’ in each of his films—multitasks big time here. He sings, he plays the harmonica, he even ‘dances’ a bit in his seat. And he drives, of course, through a very pretty landscape of Kashmir in the spring.

2. Jeevan ke safar mein raahi (Munimji, 1955): If Shammi Kapoor was looking forward to his true love in Kisi na kisi se kabhi na kabhi, Dev Anand in Jeevan ke safar mein raahi has found his true love—and he’s bugging the hell out of her. A playful song, even though the mostly-flirtatious lyrics and the peppy music hide occasionally philosophical words, too. The sadder, Lata Mangeshkar version of the song, is also a car song (and a lovely one at that). 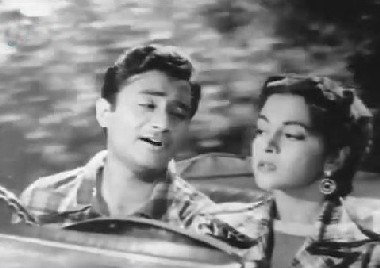 3. Jiya o jiya o jiya kuchh bol do (Jab Pyaar Kisise Hota Hai, 1961): Dev Anand again, and this time on top of the car, rather than inside it. Here, he’s trying to woo his girlfriend (who is quite amenable to being wooed, anyway) as she travels on the Darjeeling Hill Railway. A car full of our hero’s friends drives alongside, with Dev Anand sitting atop the luggage on the roof of the car. Precarious, to say the least. Coincidentally, like Jeevan ke safar mein raahi, this one too has a sad female version, though without the car. 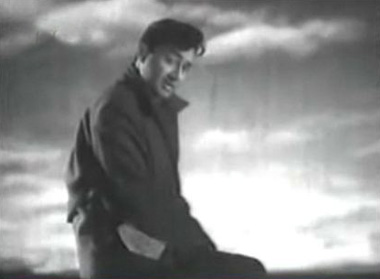 4. Yeh lo main haari piya (Aar Paar, 1954): The good thing about being the passenger, rather than the driver, is that you can put your heart and soul into singing (not that that seems to have been a constraint for most car songs). And Shyama, with her lovely flashing eyes and that gorgeous smile, puts her heart and soul into trying to sweeten up a huffy boyfriend who happens to be a taxi driver and is giving her a lift. She pleads, she coaxes, she does a come-hither act; she even gets a little huffy.
One of my favourite Shyama songs, as well. 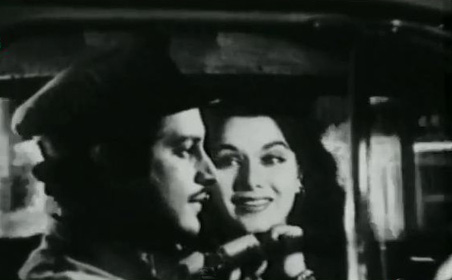 5. Baaju samjho ishaare (Chalti ka Naam Gaadi, 1958): How could one not include this song, from a film which includes, in its very name, a vehicle? The Ganguly brothers—Ashok Kumar, Kishore Kumar, and Anoop Kumar—come together in this madcap song in their rather ramshackle car (it was a 1928 Ford model ‘A’ roadster). The car careens all across Bombay, and we get not just a glimpse of the city, but also a good idea of the minds of these three loony characters. Loads of fun, but dangerous for pedestrians and other traffic. 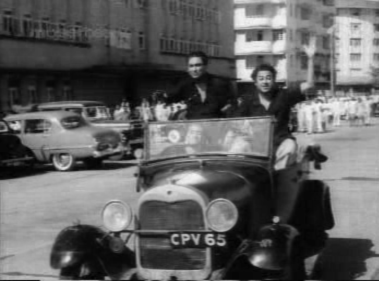 6. Raahi mil gaye raahon mein (Dil Deke Dekho, 1959): Back to Shammi Kapoor, and here he’s doing a Dev Anand-in-Jeevan ke safar mein raahi number: driving while singing to a lady who’s not kindly disposed towards him. The lady he’s pestered and managed to get into riding alongside him in his car is an irritated Asha Parekh. In the car towed behind—a long way behind—is the lady’s even more irritated fiancé, Rajendranath, who’s suddenly found himself bereft of female company. Quintessential Shammi Kapoor, doing his wooing while driving, and succeeding too. 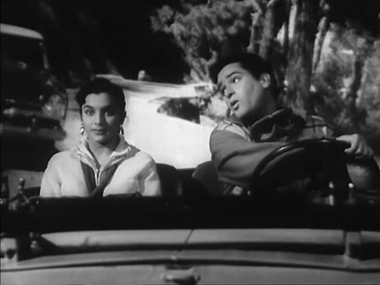 7. Jab dekh liya toh chhupenge kahaan (Chirag, 1969): Although the last verse of this song is sung outside the car, the rest of the song takes place with Sunil Dutt and his pal (played by Mukri) sitting inside the Datsun—whether it’s moving or stationary. A song somewhat reminiscent of Pukaarta chala hoon main, in that it’s set  in Kashmir, with Asha Parekh playing a heroine surrounded by a group of sahelis, all of them on cycles, while the hero travels in a larger vehicle. There’s a lovely lilt to this tune, and I like the fact that we see such beautiful glimpses of the countryside—the poplars, the grazing sheep, the hills beyond.

8. Unse rippy-tippy ho gayi (Agra Road, 1957): Compared to the other songs in my list, this one’s a relatively little-known one, and one short verse is actually sung between two cyclists.
Despite that, one reason I’m including this is that I like both Shakila and Vijay Anand. Another is that I like the fact that, in a refreshing change from the usual, the woman’s the one driving the car, while the man is the one sitting in the passenger seat. And, of course, it’s a cute song. [What is it with filmi cars and cycles, by the way? Here too, the chorus is on cycles, while the ‘lead singers’ are in the car].

9. Chaahe koi khush ho chaahe gaaliyaan hazaar de (Taxi Driver, 1954): Dev Anand again—and this time not in romantic mode, but totally nutty, with a bunch of equally carefree pals (including Johnny Walker). This is one of those ‘to hell with the world’ songs, which combines a socialistic outlook with a motto of not worrying about what the future will bring. These men are ready to take on life: even if it means having to push and pull their dilapidated car along, or change a punctured tire while they’re out on a joy ride.

10. Yeh rang na chhootega (China Town, 1962): I began this list with a Shammi Kapoor song, and I’ll end it with one, too. A sweetly romantic song, with the very handsome Shammi paired with a pretty-as-a-picture Shakila. It’s in the car throughout, and at night, too, on what seems to be a fairly lonely stretch of road. Thank heavens for the lack of traffic; since he spends most of his time looking affectionately at her (rather than at the road), it’s just as well.

Which are your favourite car songs?

162 thoughts on “Ten of my favourite car songs”